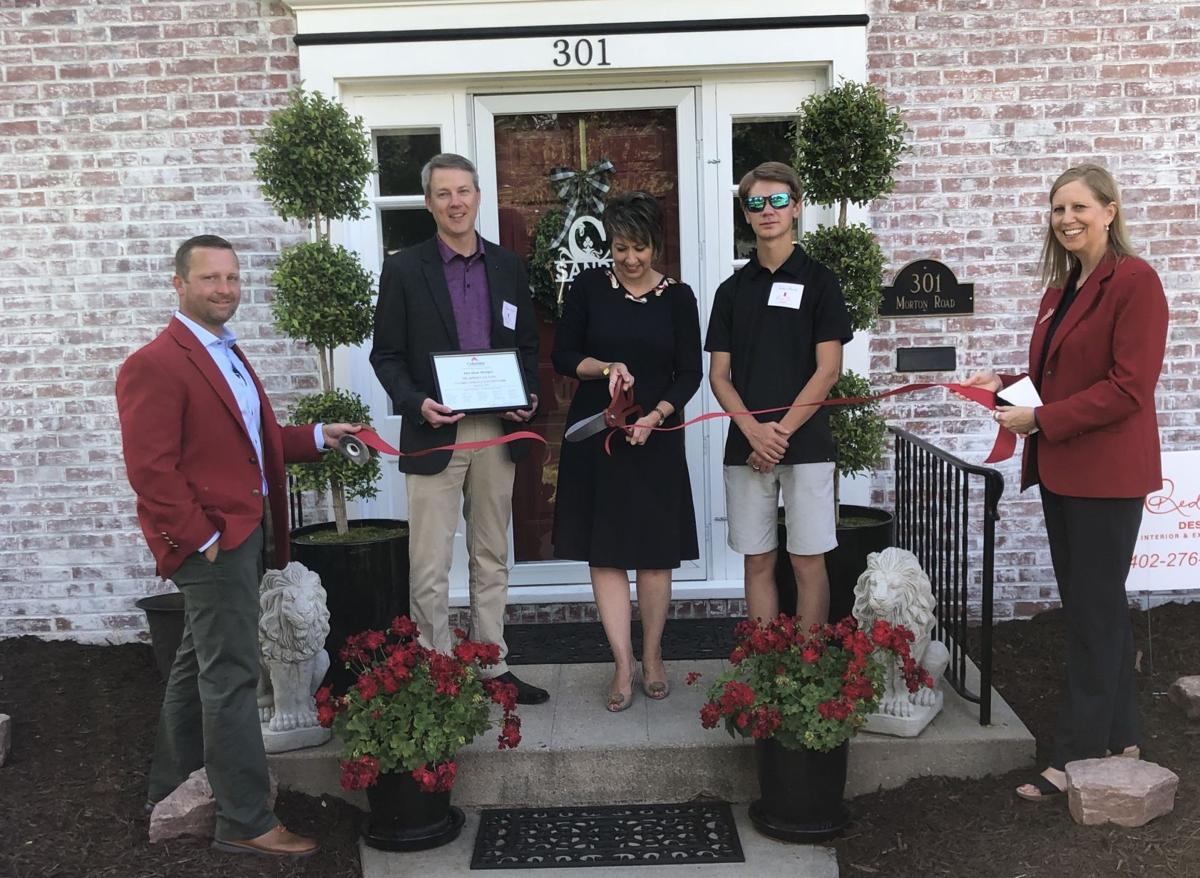 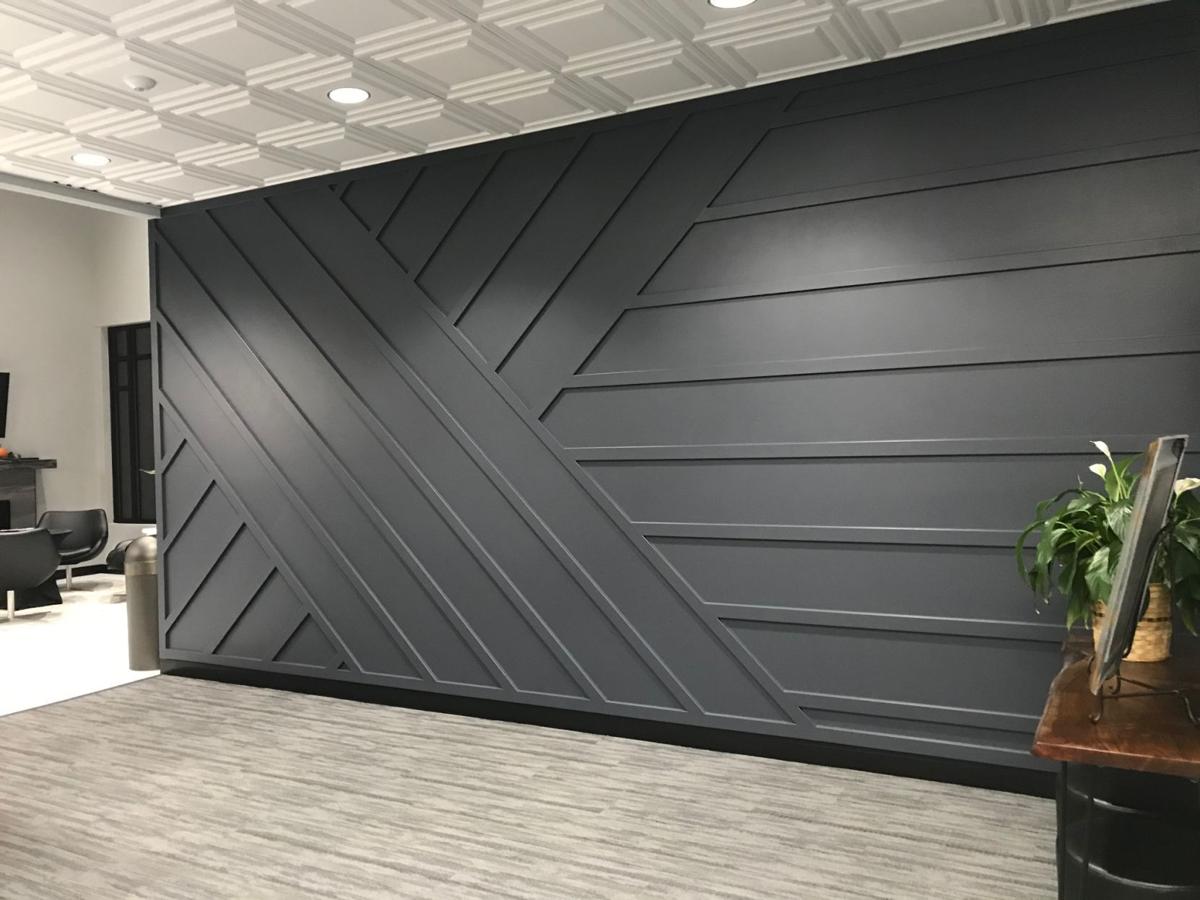 Pictured is the accent wall at kwELITE Sharyle Sands designed as part of her new business, Red Door Designs. 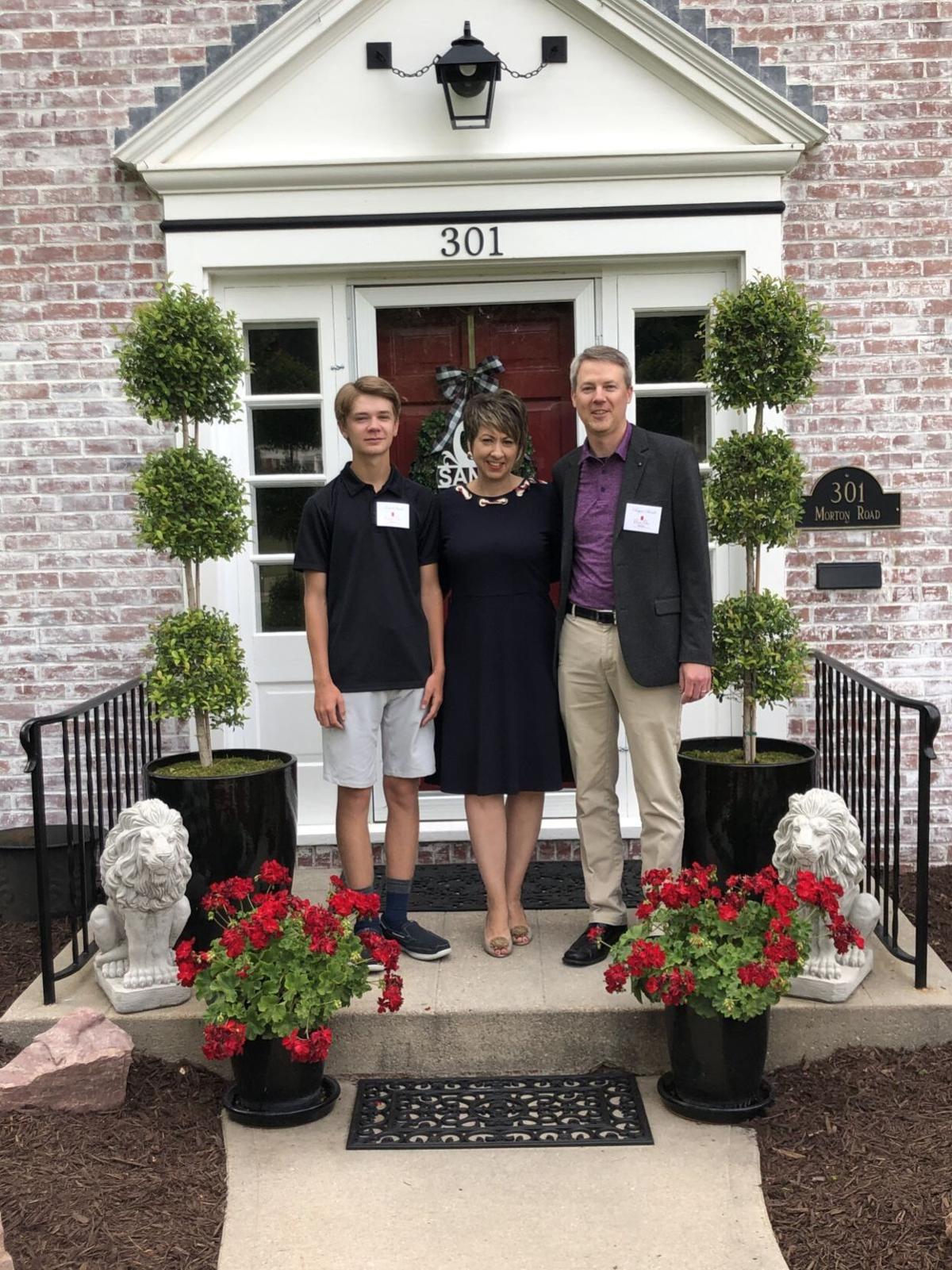 Sharyle Sands stands in front of her home with her family for the launch party of her business, Red Door Designs.

Sharyle Sands recently launched her interior-decorating business, Red Door Designs, during a pandemic while continuing to work full-time for the Columbus Area Chamber of Commerce.

Despite the obstacles, Sands recently worked with her family on an accent wall for kwELITE and said business has been good.

She and her husband in past years have renovated their home, including removing peeling white paint off of brick a couple of summers ago. The project took months.

Last year, she took an entrepreneurship class and hired a business coach through Central Community College-Columbus. Her original goal was to open her business in February, a year after the class.

“But with COVID that kind of all set us back ... and so I didn’t get to launch when I wanted to, so you just kind of go with the flow,” she added.

Sands ultimately had her launch party in August at her house. She is running her business from her home.

“I had invited (Renee Mueller) to my launch party and she wasn’t able to specifically attend, but she kept me in mind for some other projects,” said Sands, who is vice president of the Chamber.

Mueller had been talking to her about a wall treatment she wanted, Sands said, and when Mueller showed her, Sands thought of her husband.

“I said ‘Oh, well I know somebody who could do that,'” she added, laughing. Sands’ 16-year-old son designed the accent wall on software he learned through school, and the wall also shows off her husband’s carpentry skills.

“It was kind of a family affair,” she said.

Sands has done several things for kwELITE, said Mueller, owner and broker of the real estate business based in Columbus.

“We really strive on supporting businesses, especially small businesses,” Mueller said. “Anything you see in our building, around the building, all that’s been done with local contractors, local vendors. She was one that I saw really wanting to get her business up and off the ground.”

“She’s very professional and knowledgeable,” Mueller said. “She keeps up on everything that is popular in the design world.”

kwELITE ended up sponsoring an accent wall, similar to the one they have, and auctioned it off for Taste of Columbus. It was a success for the Sands family.

Both Sands and her husband work full-time and run their businesses on the side. Her husband on the side does finishing carpentry work and is a computer analyst by day.

Despite the challenges of time, time management and finding specific vendors she wants to work with, Sands recounted some of the rewarding successes. For example, one client needed Sands to rehang artwork and family photos.

“To be able to see how happy she was when we were all done,” Sands said. “Being able to hang that piece of artwork that they had from when they were early married or things that belonged to other family members -- maybe they were pieces that belonged to her mom. It’s really gratifying.”

Fall is a great time for planting trees and I have some good news. Seventy-five large shade trees are available for free to plant in Columbus.

More than 50 Nebraska companies will be participating in a nationwide virtual job fair running from Oct. 14-25.

When it comes to "female health issues," have you noticed there's a tendency for people to whisper or not say anything at all? But a condition…

Looking to the future

Registered voters in Columbus have the opportunity to approve the issuance of bonds for an exciting community building project on November 3. …

Before the construction of the Horizon View neighborhood two years ago, it had been nearly 40 years since Madison has seen a new subdivision. …

Craft Brewers Guild-sponsored promotion seeks to get Nebraskans to drink nothing but locally produced beers and ciders during October.

Pictured is the accent wall at kwELITE Sharyle Sands designed as part of her new business, Red Door Designs.

Sharyle Sands stands in front of her home with her family for the launch party of her business, Red Door Designs.