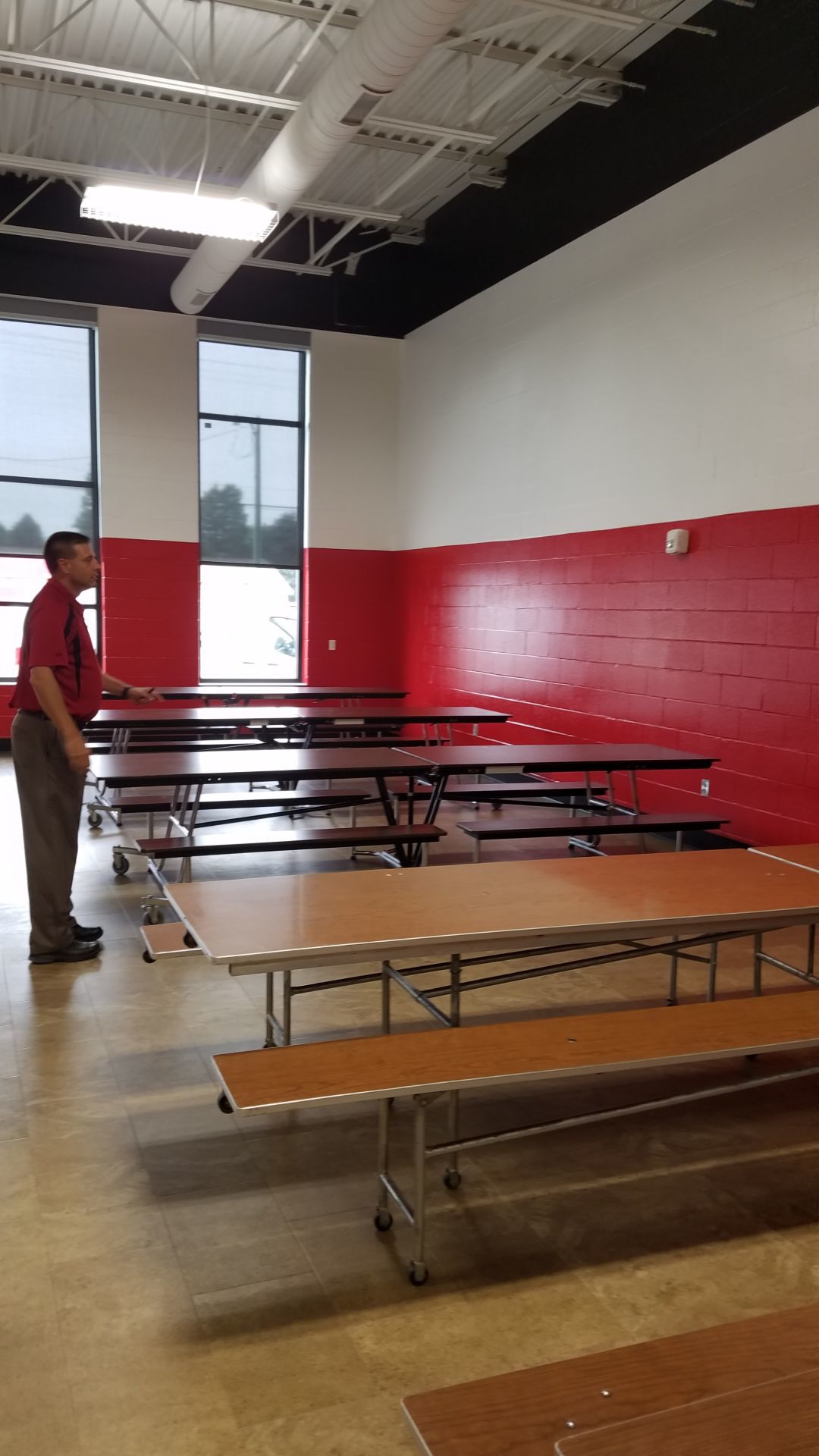 David City Public Schools Superintendent Chad Denker on an August 2018 day from inside the local elementary school's cafeteria talks about its expansion and how it has helped students and faculty there and at the high school. Denker and his district are currently dealing with empty schools as schools across the state deal with the effects of the COVID-19 pandemic. 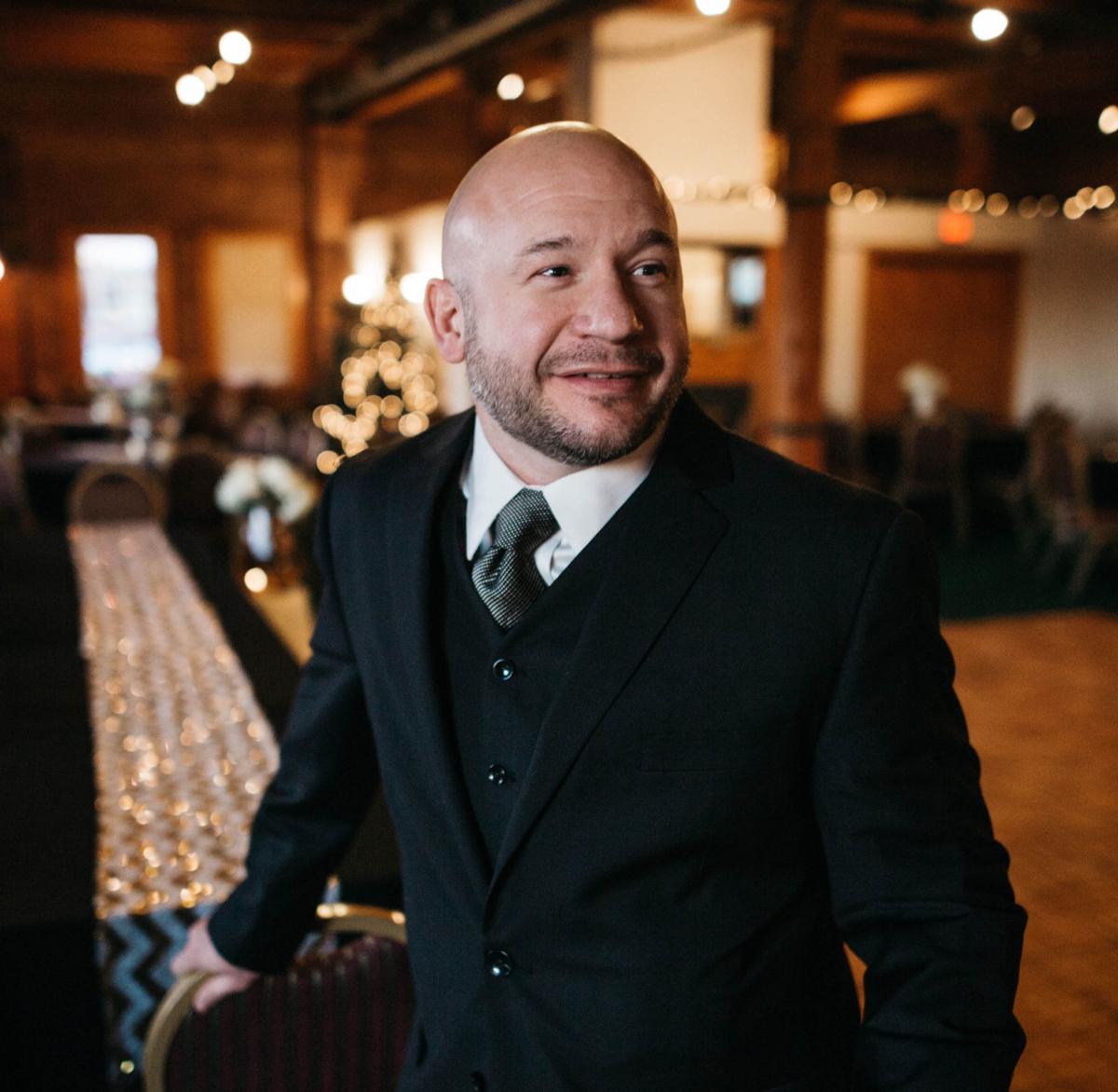 Sam Stecher, superintendent at East Butler Public Schools, said his district is trying to make the best of a tough situation with school buildings closed due to concerns over the spread of COVID-19 throughout Nebraska. 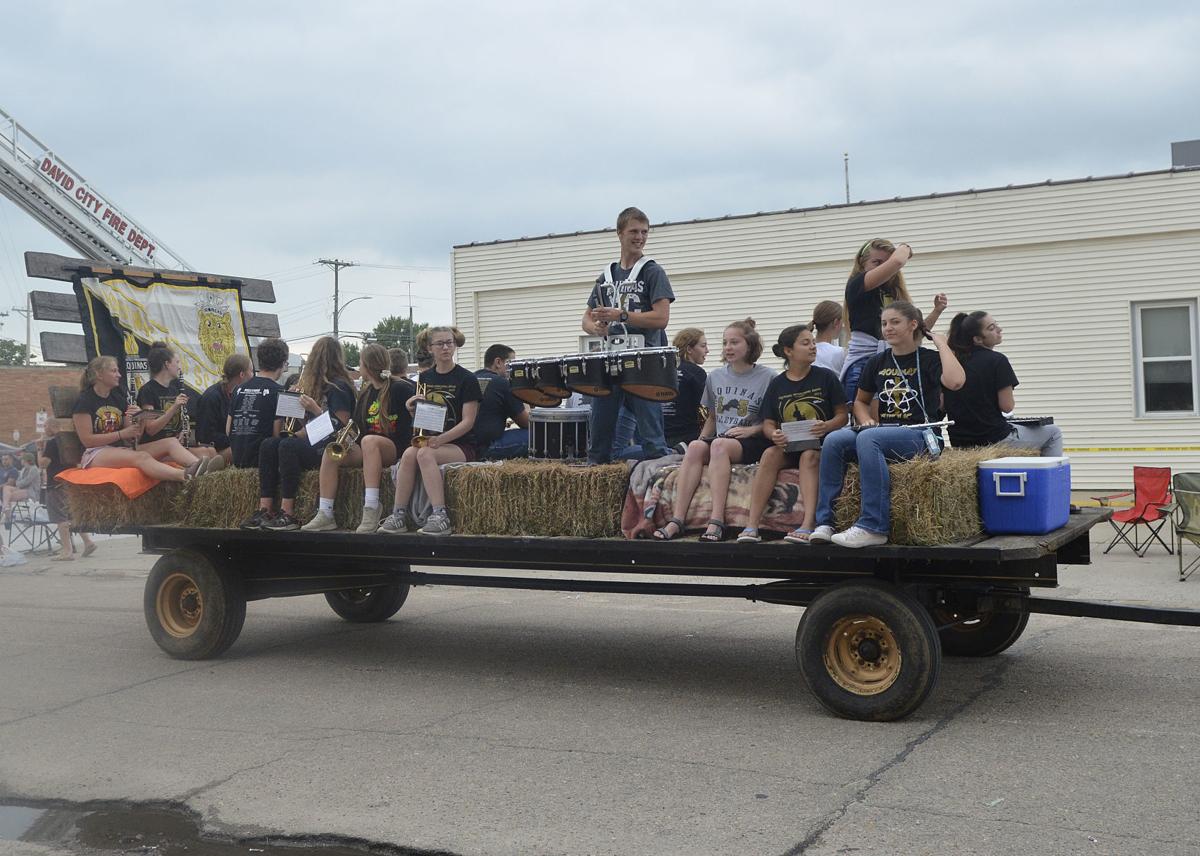 The Aquinas High School marching band float rolls by on a July day during the Butler Country Parade. The school and entire district are currently dealing with buildings closed to students and the public due to concerns over the spread of COVID-19. 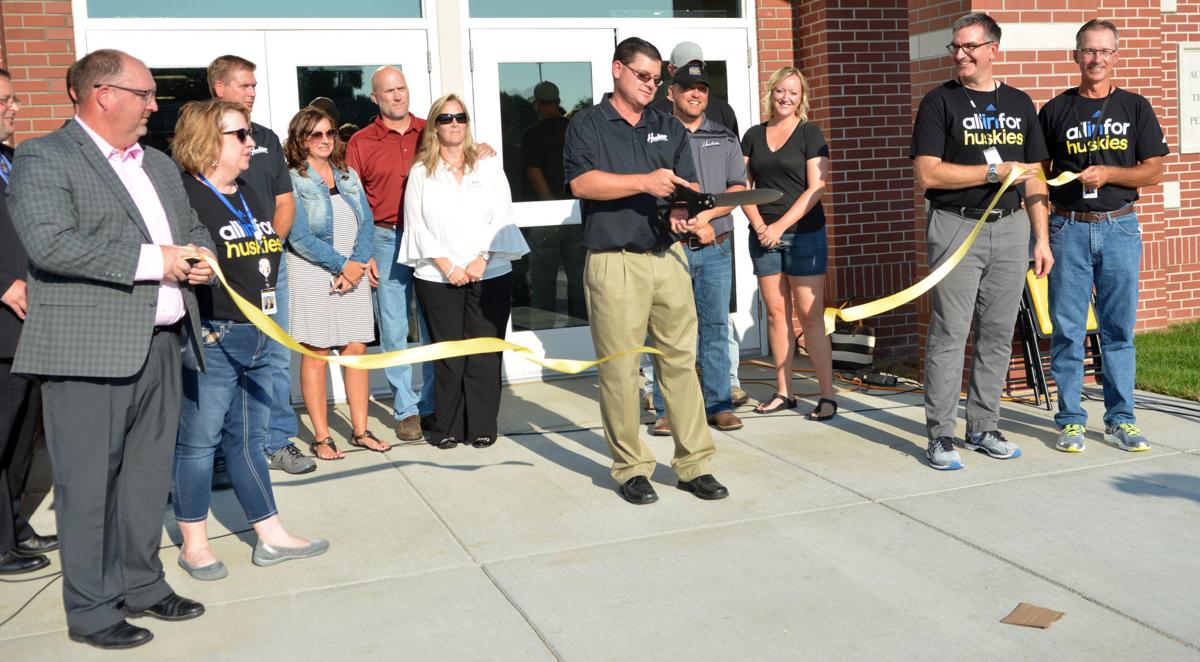 The ribbon is cut back in August 2018 on the new addition at Shelby-Rising City School. The district, along with all the others in Nebraska, are dealing with having students and staff work remotely due to concerns over the spread of COVID-19.

“Both personally and professionally,” he said in response to sympathizing with seniors who will miss their traditional high school swan song that includes prom and graduation ceremonies after Gov. Pete Ricketts last week directed all schools statewide remain closed through May 31 due to concerns over the spread of COVID-19. “I have a senior high school and I was looking forward to watching him walk the halls one last time, going to prom and handing him his diploma.

“But I also understand safety has to come first.”

David City Public, like other school districts in Butler County and beyond, is grappling with the effects of closed classrooms and buildings, now teaching kids remotely. DCPS in mid-March shut its doors completely for a little over a week so district leaders and faculty could regroup and forge a plan to how to effectively teach students under unique circumstances.

“They’ve done really well,” Denker said of faculty adjusting to a new normal. “But that’s also why we were very slow and methodical as to how we released it.”

Right now, the district sends out a week’s worth of materials. Kindergarten through second-grade students have take-home packets they pick up each week, while third-12th grades do all of their work using Chromebooks and laptops. Some teaching is being done through Zoom video and Google Classroom web services. Additionally, the district is utilizing IXL, considered the world's most popular subscription-based learning website for K–12.

Each school building’s principal meets with staff on Tuesdays and talks about things that are being done well, what could be done better and how administrators can help. Currently, students are getting about half as much work assigned to them than what they would if they were in the physical classroom, according to Denker. That was a conscious decision made by the district so that students are not overwhelmed as they adjust to a new school life without having a classroom to go to each weekday.

Other area school districts are in a similar boat. For Aquinas Catholic Schools, grades six-12 are doing things online through Power School Learning, according to Father Sean Timmerman. Meanwhile, he said, K-5 at St. Mary’s are utilizing packets they pick up at school and take home.

“We will continue with the online learning at Aquinas and the packet at St. Mary’s. We will continue that to the end of our academic calendar year …” he said. “I think it’s been going really well. Teachers are working hard. Kids are working hard. Parents have been very helpful too, very supportive of it. Obviously, it’s not the ideal situation to have, but I think people are making the best of it. I think learning is still happening, it’s just happening in a different way.”

“We are hanging in there,” he said. “On March 5, we began planning for the possibility that face-to-face educational service could no longer become variable. I don't think it would have been possible for any district to hit the ground running but we had prepared and we were in the starting blocks.

“Some students and staff have adjusted quite well and I'm certain others are struggling. It's not a steep learning curve. It is an immediate wall that needed to be scaled. Grace and patience are just as important as technology and distance education strategy.”

"We are doing the best we can to serve our students’ academic needs through a remote learning plan which combines online learning and packets … We have staff on modified schedules of home and school. We want to make as much contact with our school family of staff and students to ensure they are making it through this difficult time,” Superintendent Chip Kay said, making a point to praise faculty, students and parents for all working hard and providing feedback to make things work as best they can under the unique circumstances.

“We are doing priority learning targets and have scaled back our content and work to a learning-centered process. Right now we are focusing on student learning and less on ‘grades.’ Our teachers communicate with students in several ways and we use our digital learning management system to distribute content to students. For those with limited internet, we send home packets.”

As for seniors, area district leaders are holding out hope they can do something for their graduating classes. In David City Public’s case, Denker said talks about what could be done for the 44 seniors are ongoing. Denker said David City Public has reached out to Four Corners Health Department to see about the possibility of getting approval to give each senior a unique graduation ceremony. The idea would be for each senior (dressed in their cap and gown) and a few family members to come to the high school at a designated time on graduation day (May 16) to meet with Denker, DCHS Principal Cortney Couch and School Board President Stephanie Summers, receive their diploma and take a picture (the meetings would be limited to 10 to follow current state procedures).

The whole ceremony would be live-streamed, along with senior highlight videos and pre-recorded graduation speeches, so that family and friends out of town could watch.

Denker said prom organizers are also hopeful to have some kind of  an event for the graduating class sometime later in the summer.

At Aquinas, Timmerman said nothing has been set in stone.

“We’re still discussing those things and haven’t made any final decisions yet. … The challenge is Nebraska has an order out that you can’t have gatherings of more than 10 people. It’s hard to have any kind of musical, or vocal music concert or prom dance or graduation ceremony. Those bring in 100s of people,” he said.

“That’s a challenge right there is figuring out if you can even have something somewhat similar to what you’re trying to do and still maintain that 10 person rule. If we can’t do that then we have to wait until the pandemic is over and we can have some type of graduation. For example, if we have a graduation later in the summer if that’s a possibility if and when the pandemic ends.”

Stecher shared hope something could be done for East Butler seniors toward mid-summer.

“We are looking at dates in July to bring events back to our seniors that they have missed because of the pandemic,” he said.

As for Shelby-Rising City, the community is holding out hope that a normal graduation ceremony might still be happen – just significantly later than the original May date.

“All school activities for the year have been canceled, except graduation. There are too many variables to reschedule some other events,” Kay said, adding that all educators in the district sincerely miss seeing students in the classrooms and schools. “Based on parent feedback, we are proposing to the Board of Education to move graduation from May 9th to July 31st in hopes of having a traditional graduation ceremony for the Class of 2020.”

For his part, Denker said he remains hopeful seniors will still get an opportunity to collectively celebrate all of their accomplishments. But regardless, he and others think of them highly.

“We miss them and this isn’t what we were envisioning for their last quarter of their senior year, but we know they’re going to do great things in the future,” Denker said. “We’re just as disappointed as they are.”

The Chauncey S. Taylor House, at 715 N. Fourth St. in David City, has been sitting for a decade, filled to the brim with furniture, clothing, …

In the last three years, it hasn’t been unheard of for a bank of lights to go dark during a football game at the stadium in David City – but t…

David City Public Schools Superintendent Chad Denker on an August 2018 day from inside the local elementary school's cafeteria talks about its expansion and how it has helped students and faculty there and at the high school. Denker and his district are currently dealing with empty schools as schools across the state deal with the effects of the COVID-19 pandemic.

Sam Stecher, superintendent at East Butler Public Schools, said his district is trying to make the best of a tough situation with school buildings closed due to concerns over the spread of COVID-19 throughout Nebraska.

The Aquinas High School marching band float rolls by on a July day during the Butler Country Parade. The school and entire district are currently dealing with buildings closed to students and the public due to concerns over the spread of COVID-19.

The ribbon is cut back in August 2018 on the new addition at Shelby-Rising City School. The district, along with all the others in Nebraska, are dealing with having students and staff work remotely due to concerns over the spread of COVID-19.