Nebraska natives and David City residents Mark and Carol Moseman started collecting pieces of agrarian art after they got married 52 years ago. For the first time, parts of their collection are on display for the public.

On April 16, a public exhibit featuring a third of the Mosemans' private collection opened at the Albrecht-Kemper Museum of Art (AKMA) in St. Joseph, Missouri.

The exhibit, 'Agrarian Spirit in the Homestead Era: Artwork from the Moseman Collection of Agrarian Art,' will be open at AKMA until June 6. After that it will be on display at the University of Nebraska, Lincoln's Great Plains Art Museum from July 2 to Oct. 23.

Rather than being an art movement from a certain time period, agrarian art focuses on the subject of rural farm life, often evoking the spirit of expansion and the immigrant farmers who settled in the Midwest.

"Agrarian art is not simply beautiful landscapes, it is also reminding us of the community involvement — that we don't do this alone, that we have to do it with each other. And perhaps a sense of being American is that sense of community," AKMA Marketing and Communications Manager Jill Carlson said. "That's the way that we survive these long winters and that's how we thrive through the winter and through the hard times."

Mark and Carol said their upbringings certainly contributed to their interest in agrarian art.

Both of them were raised on small farms in rural Nebraska — Mark grew up near Oakland, Carol near Brainard. They lived most of their adult working lives in Kansas City. Shortly after retiring in David City in 2002, Mark and Carol helped start the Bone Creek Museum of Agrarian Art, 575 E St. in David City. Mark is an agrarian artist himself.

The Mosemans have been collecting art for more than 50 years, but only in the last decade-and-a-half have they turned their attention to curating a "serious" collection of agrarian art.

"I would say the last 15 years have been the most intense with the most important artworks by nationally-known artists, deceased artists, artists both from Europe and America," Mark said.

The Mosemans' efforts have resulted in a unique, museum-quality collection. The exhibit at AKMA includes more than 60 paintings, drawings and sculptures.

"It's not all impressionist, it's not all realistic," Carol said. "It's a variety of artistic styles that are saying something about agrarianism and I think that makes it unusual."

While agrarian art itself isn't limited to a certain time period, style or medium, the pieces on display at AKMA do depict a certain era, specifically the time leading up to the 1862 Homestead Act through the end of World War II.

"The most significant thing about the collection is that, when you bring all the artwork together … it shows a … visual picture of the blossoming agrarian spirit, and finally its wilting," Mark said.

Mark said the change may have been related to the Great Depression and the urbanization of United States.

"That was no fault of the farmer," Mark said. "But there were a lot of farmers over this period who felt that they failed."

"You do still have some expressions that are very positive … but you begin to see a few pieces of art … where the artists are aware of this change. There's some negativity or neutrality to their work," Mark said. "And at the very end, in 1945, you have some pieces that are definitely discouraging."

Seward native to talk about Husker book during library presentation

The Rising City United Methodist Church celebrated its 150th anniversary over the weekend with a special worship service. 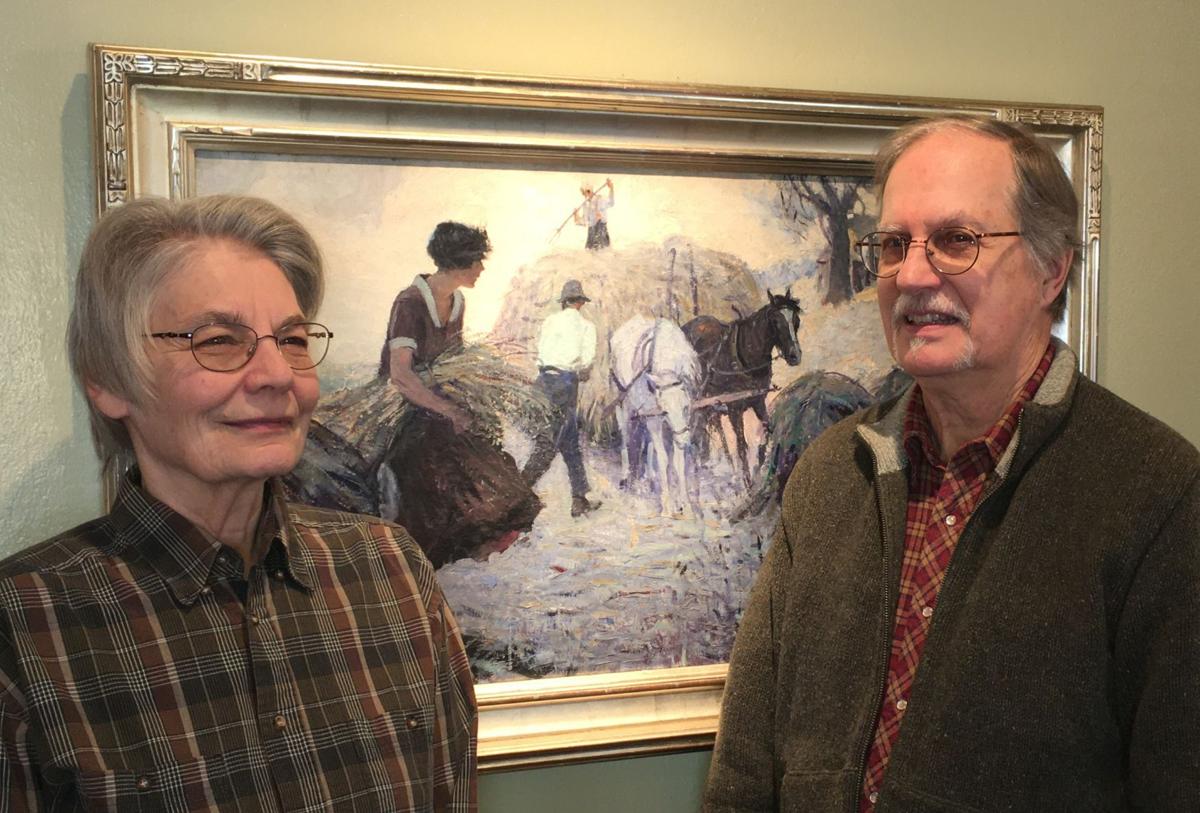 Agrarian art collectors Carol and Mark Moseman pose for a photo in front the painting 'Fighting Blood' by Frank Spradling. Art from the Mosemans' collection is currently on display in an exhibit in St. Joseph, Missouri.

Carol and Mark Moseman pose for a photo together outside. The Mosemans both grew up in rural Nebraska and began collecting museum-quality agrarian art in earnest about 15 years ago.