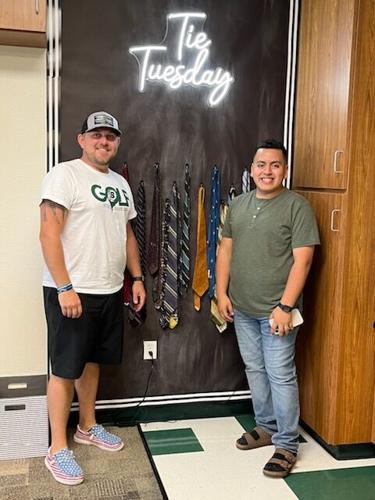 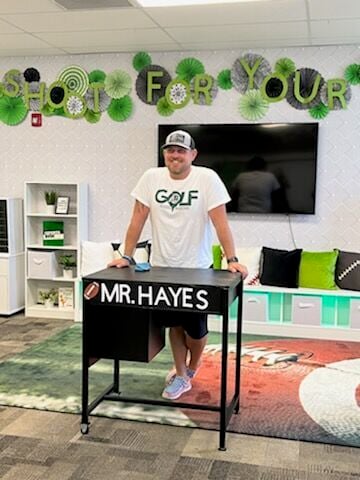 Brante Hayes stands behind his new desk, in front of his new shelving and pillows from Rocha Designs' classroom makeover.

Brante Hayes, a 2002 graduate of David City Public Schools, now teaches at Schuyler Elementary School, where he has become famous for his "Tie Tuesday" concept.

In April, Hayes won a classroom makeover from Schuyler's Rocha Designs, including new classroom furniture, storage solutions and decorations. He discovered he had won when a small parade walked into his class.

“I could see them coming down the hall, I heard the music. I wondered about the neighboring teacher. Is it for her or me? I had no clue at all,” Hayes said shortly after discovering he had been selected in April.

The classroom makeover came as part of a contest Rocha Designs held where teachers could be nominated by anyone who felt the teacher deserved a little extra recognition for their work, something Hayes was very happy to accept.

"It’s been tough the last two years. It’s been hit after hit, so having something positive has been lifting,” Hayes said at the time. “I’m appreciative of being recognized for my life in the classroom.”

Hayes' brother lost his battle with cancer in 2020. Shortly after, Hayes' wife was diagnosed with cancer. Rocha said at the time of the contest that Hayes' endurance in the face of that struck a chord with many.

Last week, the renovations were completed, including a sports motif to the classroom and a wall dedicated to Hayes' Tie Tuesday activity. Hayes, his wife and mother all came to see the changes.

"I was speechless, really. Just the transformation from what I had thrown out to them to what he had done, I sat there in awe, just staring across the room," Hayes said.

Designer Jose Rocha said he knew he had to do something special for Tie Tuesday, which has made Hayes' class somewhat famous among students.

"We knew we had to have a wall for Tie Tuesday. At first we were going to go with a wooden sign but then we decided no, it should be neon," Rocha said. "That's everyone's favorite."

On Tie Tuesdays, Hayes lets his students pick a tie from the wall and teaches them to tie them. If they have mastered tying them by the end of the year, they get to keep the tie.

"Before that, I just had my ties thrown on a rack, no one really saw them until the day of Tie Tuesday, now they'll see them all week and get excited about it," Hayes said.

Roach also redid the walls and added a lot of shelving and organizational units.

"We did wallpaper, added some rugs, a desk, chairs, shelving, boxes," Rocha said. "We wanted it to be a nice classroom for the kids, really welcoming and fun."

The sports motif comes from Hayes' position as boys golf coach at the high school and his undying love of sports. Even the pillows in the front of the classroom match the theme.

"One big thing he added is in the front of the room, seating with all the sports pillows and shelving, they can sit or lay there. Having that there also helps to keep things organized, I like to keep my classroom tidy," Hayes said.

Hayes added that he is grateful for the recognition of his work and the effort put into the makeover.

"It helps feel like my job matters and people do recognize it," Hayes said. "Normally teachers get the rap or hear negative things, sometimes we get a 'you're doing a good job' and words are nice, but when someone puts it to action, it really re-energizes me for the next year."

A David City mom attributes her daughter’s vast improvements to the staff at David City Public Schools and the community at large.

Former longtime Columbus taekwondo instructor Ken Brooks passed away recently but those who knew him say he made a lasting impact on the community.

Giving the gift of art: David City artist does mural for Columbus business

The annual Bellwood Daze River Run is a tradition for many.

Butler County dispatchers will have their uniforms paid for by the county.

David City’s new housing development in the north part of town appears to be quickly coming together.

Brante Hayes stands behind his new desk, in front of his new shelving and pillows from Rocha Designs' classroom makeover.