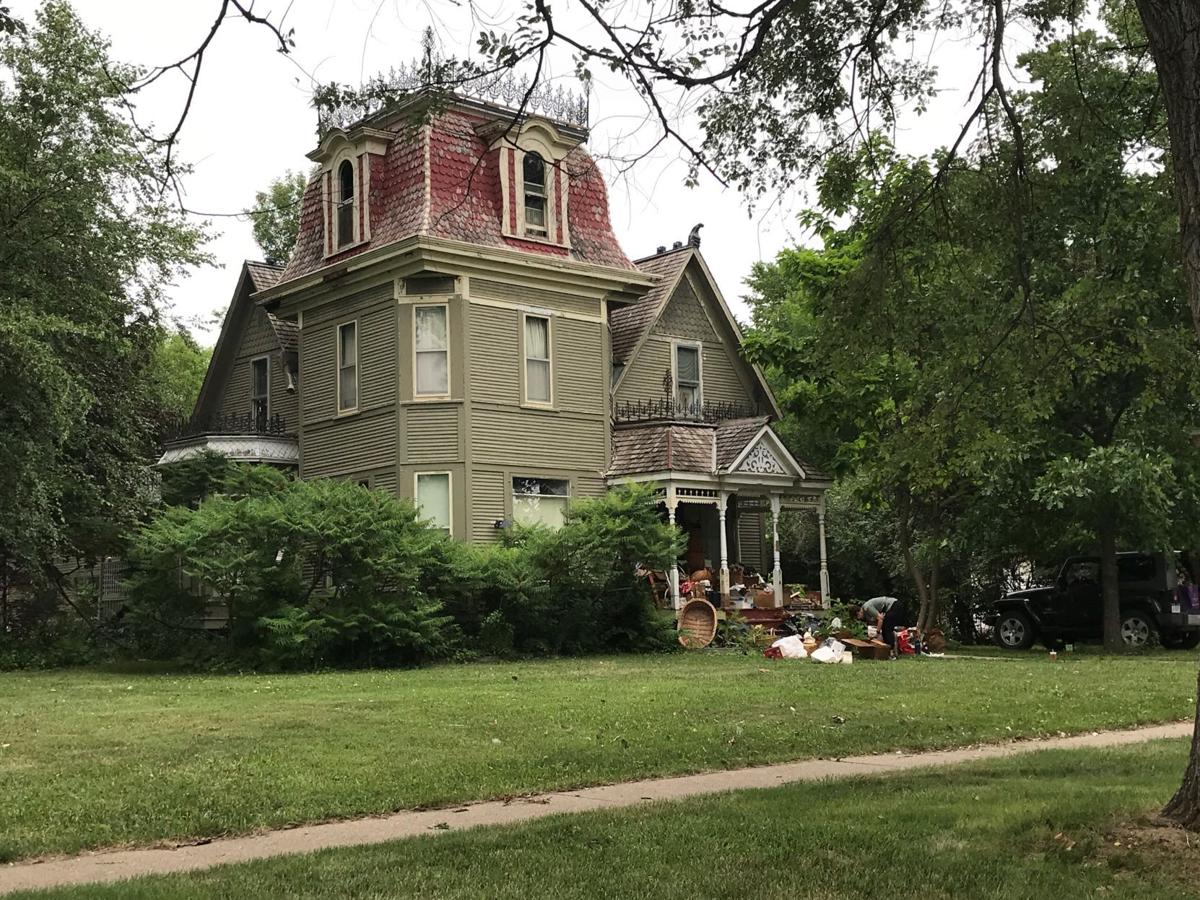 A view from the sidewalk of the Chauncey S. Taylor House at 715 N. Fourth St. in David City on Wednesday, July 15. 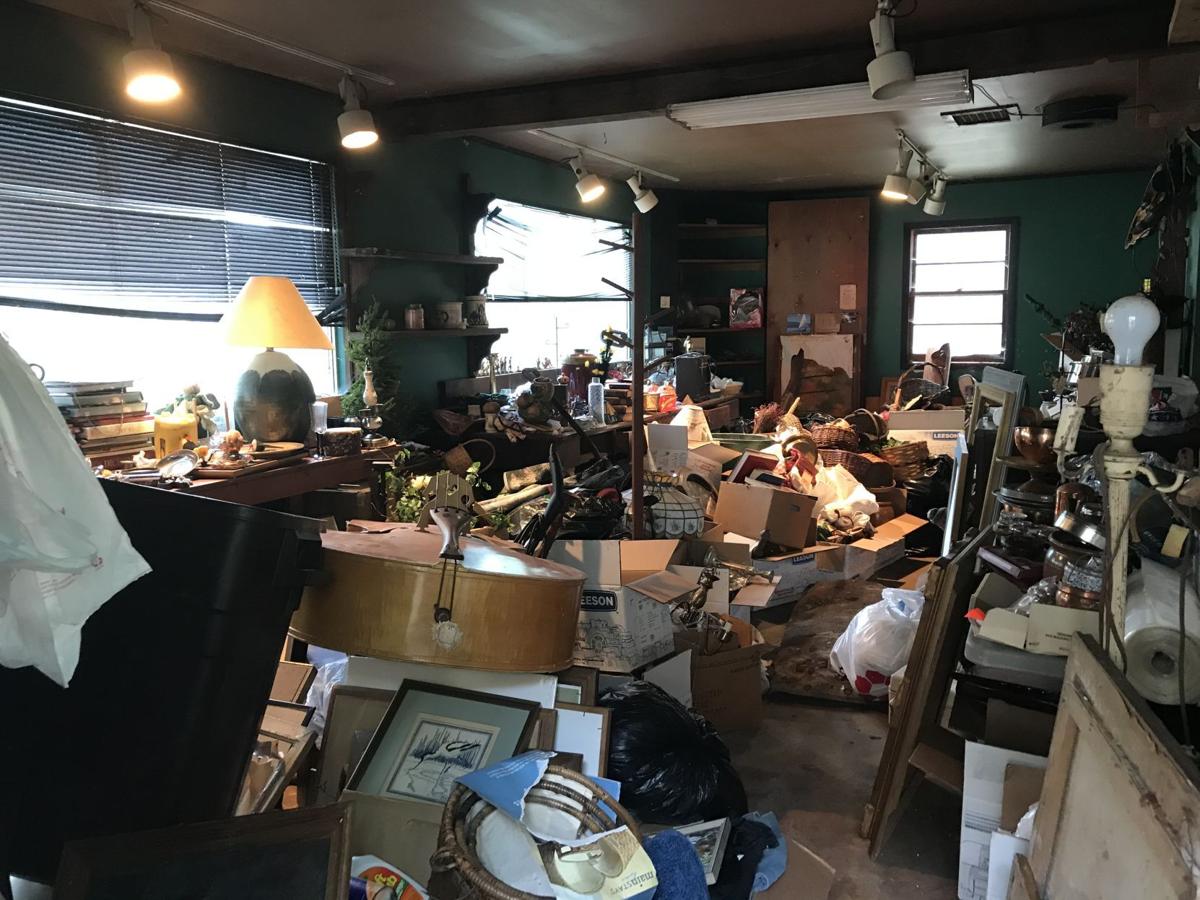 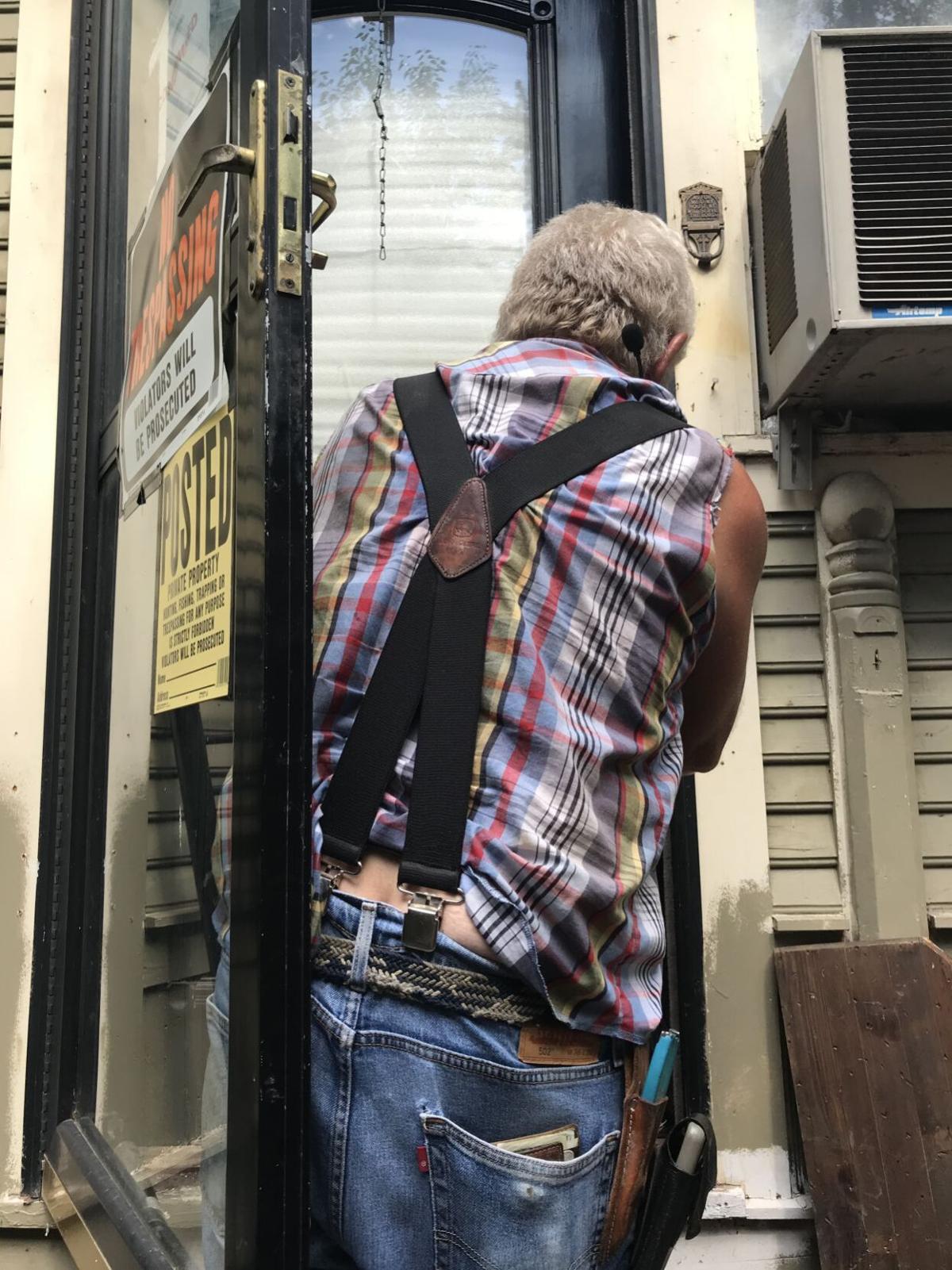 Jeff Klug unlocks the back door to the Chauncey S. Taylor house on Friday, July 17. 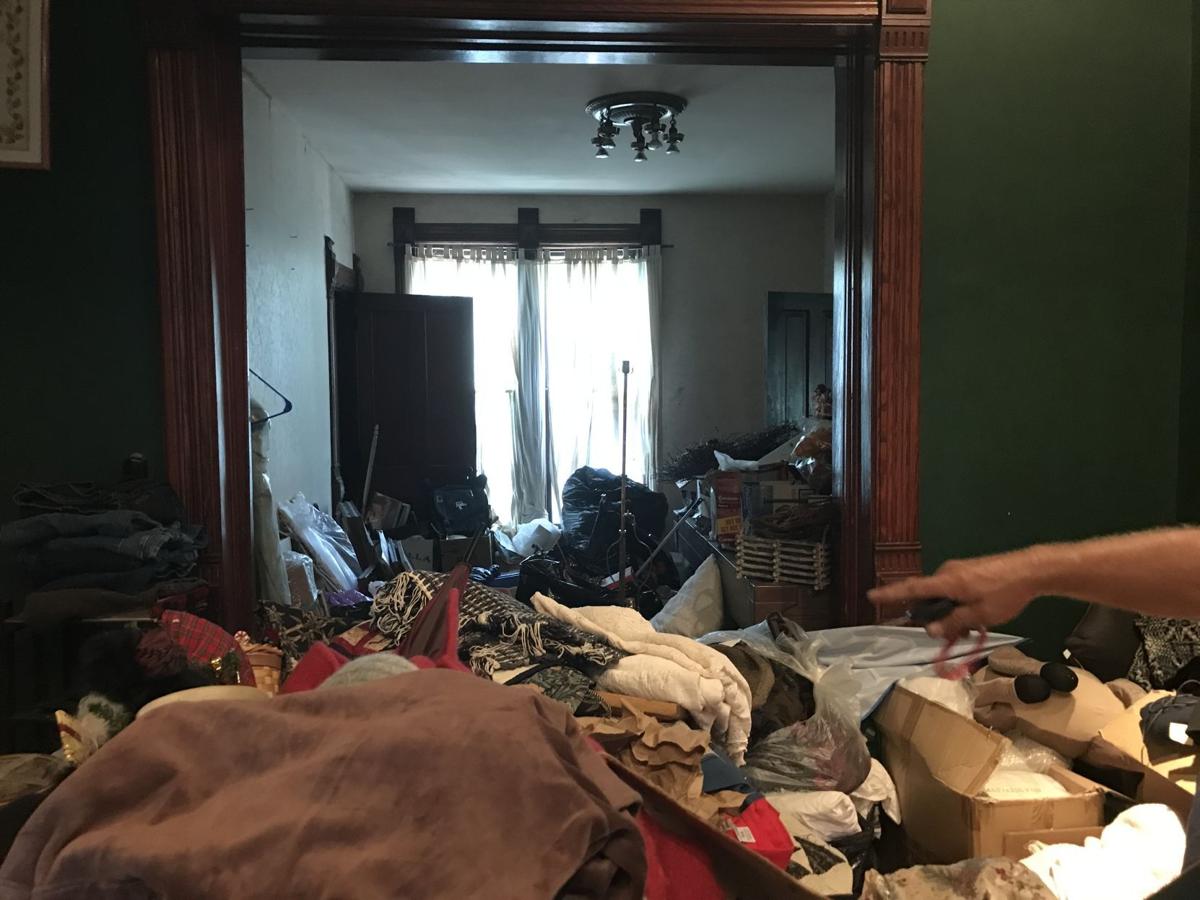 Salvaged items wait in piles in the living room of the Chauncey S. Taylor House at 715 N. Fourth St. in David City on Friday, July 17. 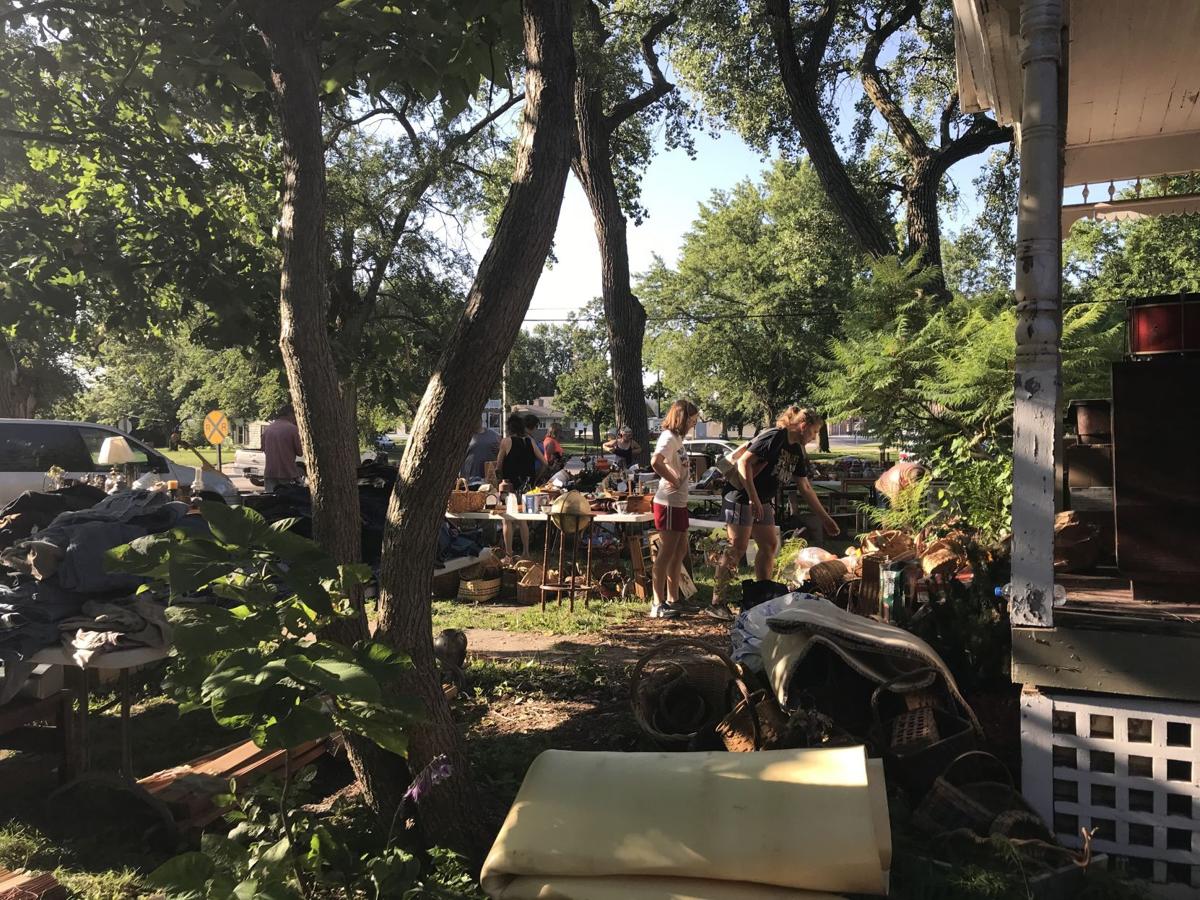 Visitors pick through clothing, home décor, toys and other household items at a yard sale at 715 N. Fourth St. on Saturday, July 18.

The Chauncey S. Taylor House, at 715 N. Fourth St. in David City, has been sitting for a decade, filled to the brim with furniture, clothing, raccoons and mold.

Now, the responsibility of cleaning the place out has fallen to local farmers Cathy and Jeff Klug.

“I have never stepped into something like this,” Cathy said. “Every morning I get up and know that this house is waiting for me.”

Earlier this year the Klugs put in a bid to the City of David City – $8,700 for the contents of the house. The deal was that they could keep and resell anything they found, but would be responsible for emptying out the three-story structure, its basement and the two-story garage.

David City Councilor Pat Meysenberg, who supervised the prospective bidders when they came to take a look at the place, said at least one person climbed in through a broken upper-level window and, after emerging, said they would do the job if the City paid them.

The Klugs, who have aged into retirement, weren’t about to climb through any second-story windows, and the upper levels were virtually inaccessible from inside. They saw parts of the house’s ground level and climbed over clothes on a staircase to get a peek into two second-story rooms.

Cathy said she didn’t know about the bidder who got into the upper levels of the house. David City Councilor Skip Trowbridge said that although there was casual conversation about the condition of the house, the Klugs were never formally given a history of the property.

“The City isn’t paying anyone anything. We are allowing it to happen for compensation,” Trowbridge said.

The council accepted the bid that was most advantageous to the City, he said. And that was the Klugs’

Jeff and Cathy Klug have been married for about 10 years. They live and farm 14 miles north of Columbus. In her retirement, Cathy said she has done similar work at other properties – warehouses and houses in Columbus and Albion. But she said she has never seen a building as bad as the Chauncey S. Taylor House.

“We are going to be so far in the hole and this city is sitting there, so happy because they finally got rid of it at my expense. And it shouldn’t have been at my expense,” Cathy said. “I don’t understand why they would treat somebody like that.”

The killer thing, Cathy said, is that the Klugs are on the hook for the cost of hauling, dumping and junking the refuse and unsalvageable items they find.

The Klugs have rented a dumpster from the Butler County Landfill, which they’ve filled at least five times so far. It costs 60 cents per mile to haul the dumpster from 715 N. Fourth St. to the landfill, and then $60 per ton of garbage. Cathy said she has already paid hundreds on trash – literally. She said she recently got a $1,400 bill for the garbage.

“It costs over $200 and some every time. This is like the sixth load because there is so much mold and damage,” Cathy said.

Everything the Klugs make in sales will likely only fund more trips to the dump, Cathy said. That, more than anything, is why the Klugs are facing serious debt.

Their only hope to recoup some of their losses – and this project will almost certainly be a net loss for them – is to sell some of the valuable items they have salvaged from the house.

Cathy said she’s most hopeful about several pieces of brand new furniture, a grandfather clock and some glass lampshades and paintings. Cathy said many of the Klugs’ other valuable discoveries have been stolen as they have been unearthed.

“There were beautiful pots out here, probably $2,000 in just law furniture and ornaments. When I came back the next day, it was just gone. The entire yard was stripped,” Cathy said.

At a recent yard sale, Cathy said one group drove off with items in their truck that were never paid for.

Another time, she said she got a call from the neighbors that someone was inside the house in the middle of the night. Cathy reported those incidents to David City Administrator Clayton Keller, who reported them to the Butler County Sheriff's Office.

Their only option, the Klugs said, is to hold yard sales for what they've managed to hold onto – to do otherwise would take time, money and space the Klugs do not have. They started holding yard sales but they were shut down by the City.

On July 15, the City Council held a special meeting to discuss the yard sales. Councilors voiced concerns that members of the public were being let into the house and garage, where people have been getting sick.

Jeff and Cathy said they have not, are not, and will not let the general public into the house or upper part of the garage. Meysenberg, who has been helping the Klugs throughout the process, confirmed that.

It is true that people have been getting sick, though.

“Several of us got really sick and we ended up with antibiotics,” Cathy said. “I couldn’t make the bacteria stop.”

City Administrator Clayton Keller said the City required the Klugs to have liability insurance before accepting their bid. The Klugs’ insurance covers themselves and the people who come to help them work, although most of them don’t come back after their first day, Cathy said.

The Klugs may own the contents of the house and garage and have their own insurance, but the City owns the property and could be liable for any harm that comes to the general public on the grounds.

At its July 15 meeting, the council also discussed the Klugs’ deadline for clearing out the house.

The Klugs started working on the house in May. The City has already extended the original deadline for the Klugs to have the house empty, and right now the formal deadline sits at July 31. On July 15, the Klugs said they were a little over halfway done cleaning out the house and garage and will need another extension.

In response to that, Councilor Kevin Hotovy said they need to have a “sunset date” on the project – he said he doesn’t want to see things dragged out for months and months.

Cathy said she looked into hiring a moving company to clear the house out faster. The lowest offer she received was $5,000 for a team of men to work for three days.

David City Mayor Alan Zavodny acknowledged the need for another extension. At the meeting, though, he said he would prefer to make that decision on July 31 and base it upon the Klugs’ progress at that time.

The council did pass a motion allowing the Klugs to hold up to three more weekends of sales on the property, provided they were restricted to the yard and lower level of the garage.

Nuisance properties like the Chauncey S. Taylor House have plagued David City for years, and for years the City has been hesitant to spend a great deal of money on those properties.

“The City simply does not have the means to do these things,” Trowbridge said.

Most of the City’s income, he said, comes from the water, sewer and electricity departments. Trowbridge said property tax gets the City approximately $700,000 – barely a drop in the bucket.

That having been said, property values – and the property tax the City receives – are sure to rise as the City takes care of derelict buildings.

There was a good showing of 4-H and FFA at Butler County Fair despite COVID-19 keeping the status of the fair uncertain.

A view from the sidewalk of the Chauncey S. Taylor House at 715 N. Fourth St. in David City on Wednesday, July 15.

Jeff Klug unlocks the back door to the Chauncey S. Taylor house on Friday, July 17.

Salvaged items wait in piles in the living room of the Chauncey S. Taylor House at 715 N. Fourth St. in David City on Friday, July 17.

Visitors pick through clothing, home décor, toys and other household items at a yard sale at 715 N. Fourth St. on Saturday, July 18.