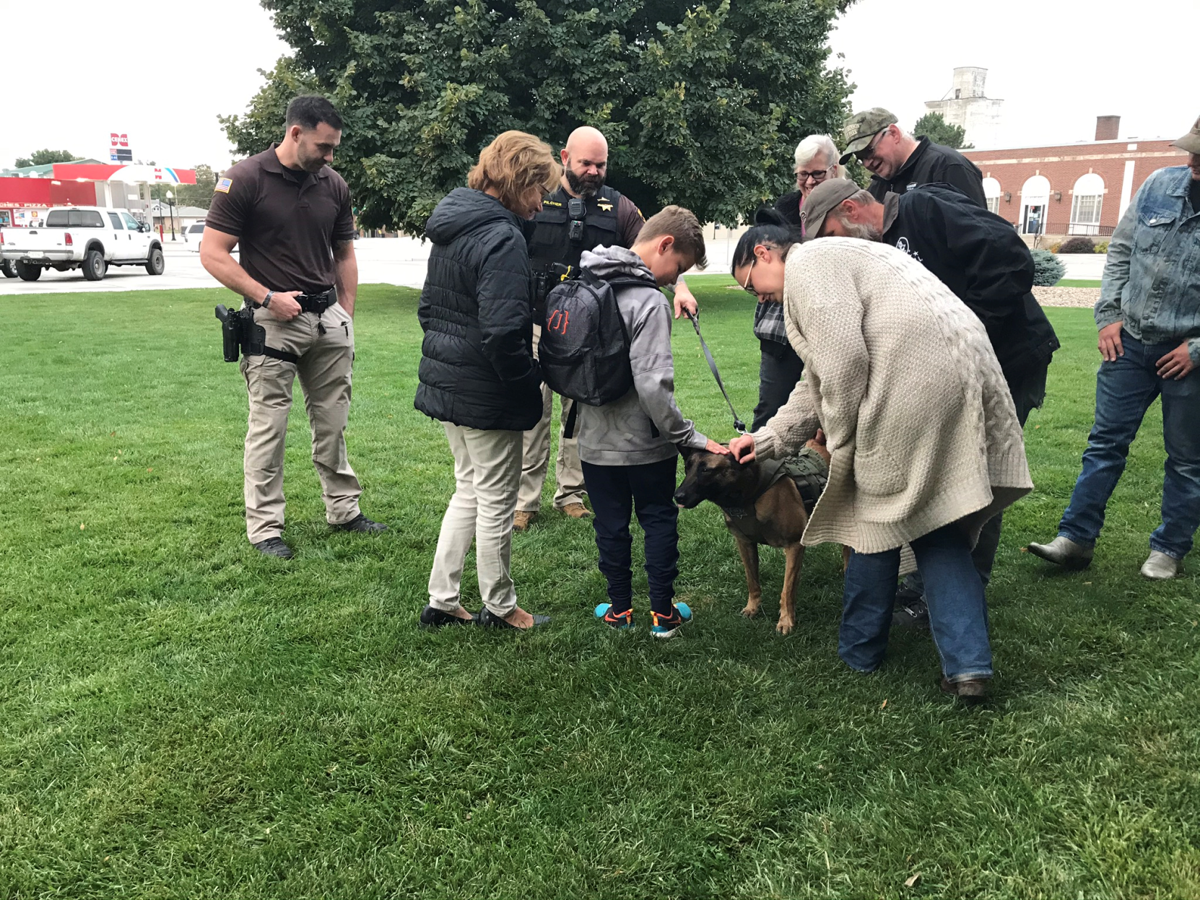 Members of the Friends of David City gather around to pet Butler County Sheriff's Office K-9, Sting, at the end of a demonstration held Friday, Sept. 11 at the Butler County Courthouse, 451 N. Fifth St. 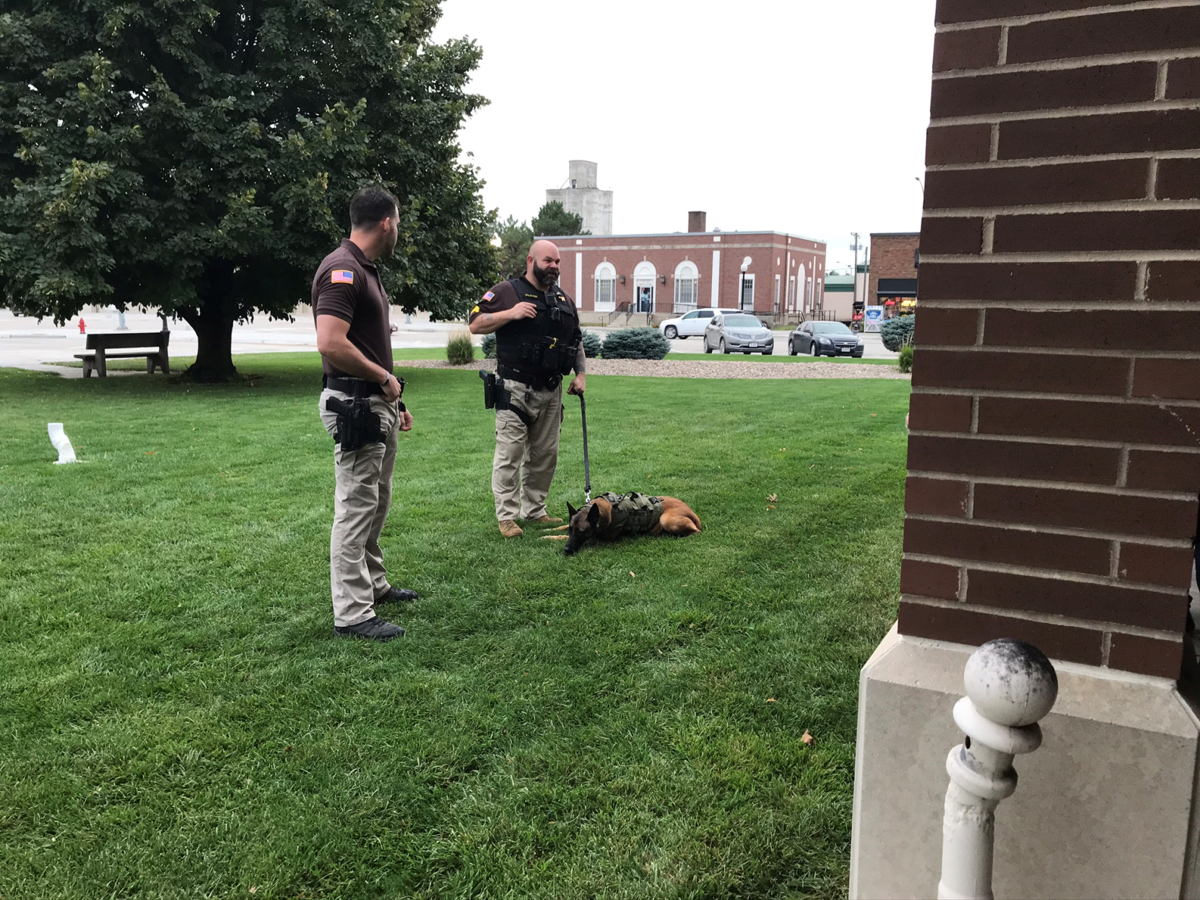 Deputies Mike Mejstrik, left, and Zak Pilcher, center, begin speaking at a demonstration of the Butler County Sheriff's Office K-9 unit, made up of Pilcher and String, right.

Sting, a female Belgian Malinois, has been with the county since 2015, and Pilcher is her fourth handler.

“I’ve had her for two years now. We work really well together; she lives with me,” Pilcher said during the demonstration.

Sting was initially trained in narcotics detection, and at Friday’s demonstration, she and Pilcher showed off those skills.

“You have an alert, which is a change in her behavior. There are signs I’ll look for – typically she’ll be fast and then she’ll pause once she gets to the odor. Once she finds the strong source of the odor, she’ll sit down. That’s the indication, which is a trained behavior,” Pilcher said.

Sting is trained on four narcotics odors – marijuana, methamphetamine, cocaine and heroin. If she gives an alert on a traffic stop, Pilcher said, that gives him probable cause to search the vehicle. She can do narcotics detection in buildings, but Pilcher said he first needs a search warrant to deploy her.

“There’s a lot of intricate law that comes with deploying a K-9. I can’t just go up to somebody’s house and let her run around,” Pilcher noted.

“If you watch 'Cops' or 'Live PD,' you always hear the K-9s barking. She’s sleeping most of the time. It’s when I pop that door and get her out,” Pilcher said. “As soon as I hook up the leash, that’s when she’s like, ‘OK, what are we doing?’”

Pilcher said he only rewards Sting with a treat during training when he knows there are narcotics present.

“If we deploy her in a real situation, there may be the odor but there may not be narcotics. This way, she’s not trained to constantly sit on a vehicle,” Pilcher said.

It turns out old dogs can learn new tricks, too, because last October Sting and Pilcher completed training to become certified in tracking and evidence recovery and detention and apprehension.

Sting can also be sent into a building or room first to help clear it. During a detention and apprehension situation, Pilcher uses a series of commands to work with Sting.

“We’ll give her the command, she’ll go towards the suspect. When she gets to the suspect, if they’re just standing there, she’ll lay down away from them and bark until I tell her to stop barking. She trains to react to movement. So if they move, that’s when she’ll go and apprehend,” Pilcher said.

Sting is trained to bite and hang on to a suspect’s arm to apprehend them.

The sheriff’s office has a bite suit to keep up with her training, which Deputy Mike Mejstrik donned for Friday’s demonstration.

Soon, the department will be adding another K-9 to its ranks. At its most recent meeting on Sept. 8, the Butler County Board of Supervisors approved a second K-9 unit. Mejstrik will be the handler.

“He’s using the G.I. fund to purchase the dog, which is outstanding. He’ll go to school in October,” Sheriff Tom Dion said.

The G.I. Bill will also pay for the training, which will take place in Virginia where the organization that offers the G.I. Bill K-9 training program – American K-9 Interdiction, LLC – is located.

Mejstrik has experience as a K-9 handler in Schuyler, and a contract he signed with the county will keep him at the Butler County Sheriff's Office for the next two years.

Sting is in good condition right now, but the working lifespan for a dog of her breed is approximately seven years.

“When K-9s retire, it’s usually due to health reasons,” Pilcher said. “Belgian Malinois don’t have as much hip dysplasia as German Shepherds.”

A second K-9 unit will also ease the burden on Pilcher and Sting, who can be called to work any time.

“It’s time, we believe, to bring in a new K-9 so when she retires we have a seasoned, veteran K-9,” Pilcher said.

Old fire chief steps down, new one steps up

After 15 years as the fire chief of the David City Volunteer Fire Department, Matt Hilger has passed the torch on to Mark Sloup.

Seven months after taking ownership of the florist business at 420 E St. in David City, things are looking good for Justin and Catherine Chmel…

Members of the Friends of David City gather around to pet Butler County Sheriff's Office K-9, Sting, at the end of a demonstration held Friday, Sept. 11 at the Butler County Courthouse, 451 N. Fifth St.

Deputies Mike Mejstrik, left, and Zak Pilcher, center, begin speaking at a demonstration of the Butler County Sheriff's Office K-9 unit, made up of Pilcher and String, right.