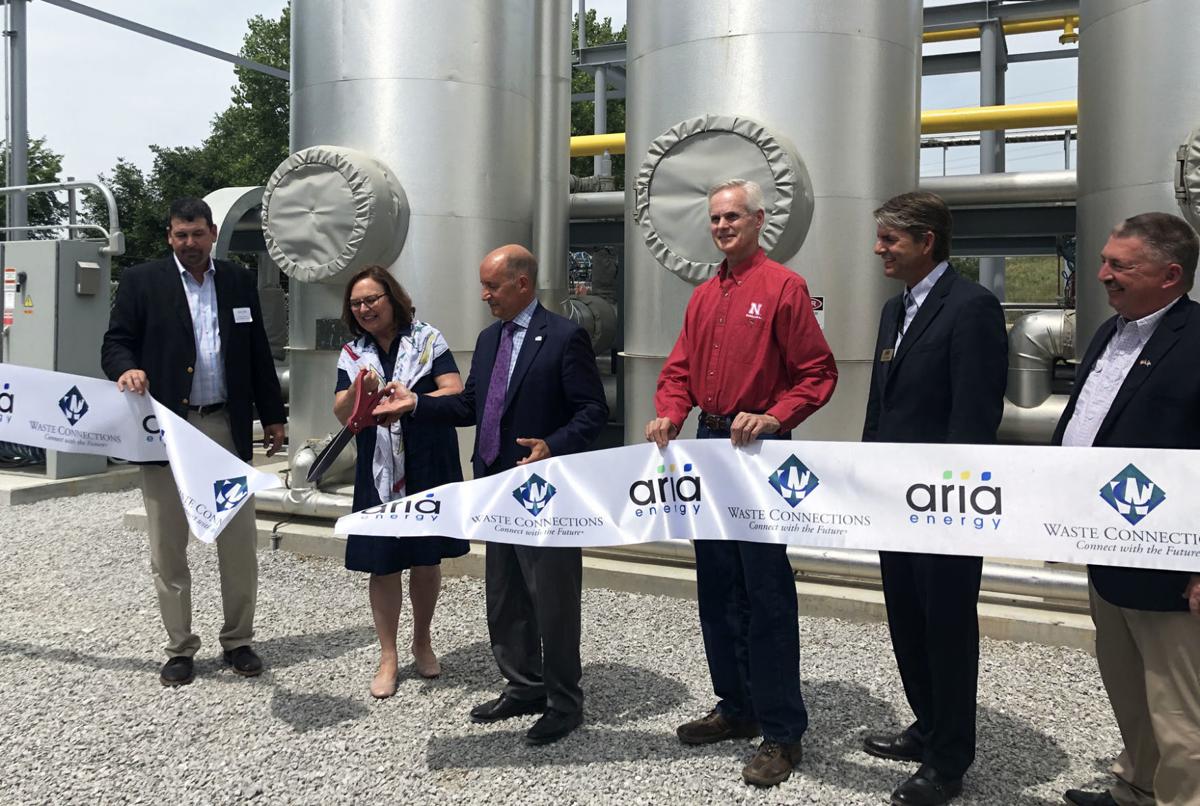 U.S. Sen. Deb Fischer completes a ribbon-cutting ceremony on Friday, July 26, at the Butler County Landfill while being accompanied by representatives of Waste Connections, Aria Energy and Black Hills Energy. The event was held to commemorate the renewable natural gas project happening at the facility. 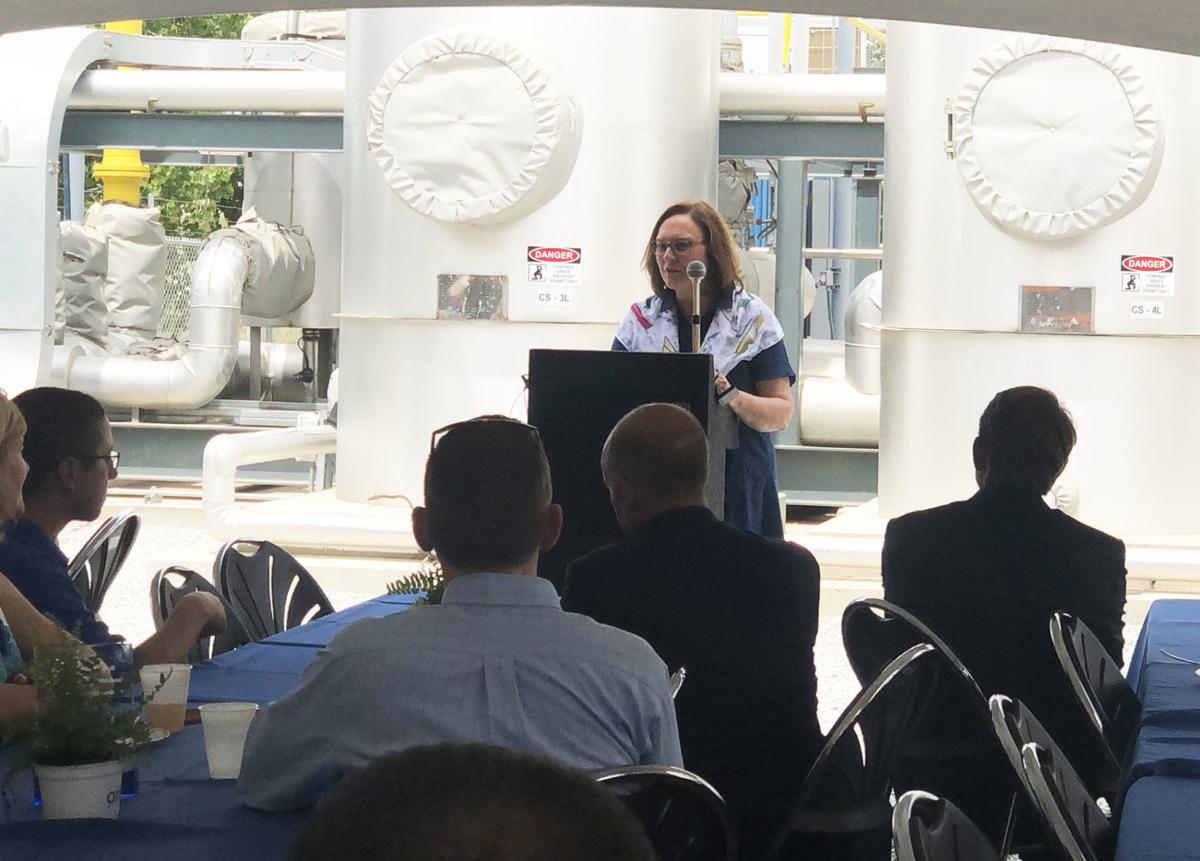 U.S. Sen. Deb Fischer addresses a crowd on Friday, July 26, at the Butler County Landfill. A ribbon-cutting ceremony was held commemorating the renewable natural gas project happening at the facility.

U.S. Sen. Deb Fischer and Lt. Gov. Mike Foley were in attendance, as were several representatives from facility owner Waste Connections, Aria Energy and Black Hills Energy. Aria Energy constructed, owns and operates the project at the Butler County Landfill, which processes and purifies up to 1,000 cubic feet per minute of Landfill Gas (LFG) into pipeline quality Renewable Natural Gas (RNG), according to information provided by Aria Energy.

The renewable natural gas produced by the project is being transported to an interstate pipeline through Black Hills Energy’s distribution system and being sold to Constellation, where it will be used by Constellation’s customers as fuel for natural gas vehicle fleets. Constellation is a leading retail supplier of power, natural gas, energy products and services for homes and businesses all across the United States.

Julie Bollenbach, of Aria Energy, said during an interview with the Sun that a similar operation was run at the landfill in years prior with one of Aria’s legacy companies, Timberline Energy, where LFG was produced, refined at sold to companies using the energy to aid with powering steam boilers. Earlier this year, Aria upped the ante with the announcement that it was completing a more expansive project, partnering with Black Hills Energy, which is providing infrastructure for the project.

“We are now refining the gas to a higher degree,” Bollenbach said, noting that the landfill receives an ongoing royalty for having the operation on its land. “It’s definitely a more expensive project and now we will get it (the gas) to the point where it’s essentially pure methane, and then it can be used at pipeline quality. Then it’s used as transportation gas to be used in vehicles."

Construction for the project, Bollenbach said, started really ramping up in spring 2018.

“This has been a much shorter construction process at the facility, because it’s a smaller (company) project, and it was nice because we had some equipment that we were actually able to re-purpose,” Bollenbach said.

Brandy Johnson, regional community affairs manager for Black Hills Energy, said that the partnership has been a good deal for the natural gas company.

“Black Hills Energy serves 319 towns in Nebraska, and we have served the David City community since 1930,” Johnson said. “We are the natural gas utility provider that serves homes and businesses, and generally, that gas comes from an interstate pipeline system that brings it in from more traditional sources, like oil and gas wells.

“And in this case with the renewable energy natural gas company, we built infrastructure that allows us to take the renewable natural gas produced and put it into our pipeline that serves David City and the surrounding area.”

Johnson noted that the infrastructure erected by Black Hills plays a vital role in helping the overall operation run.

“Essentially, the natural gas needs to get into a distribution system that allows it to go anywhere in the country,” Johnson said. “It goes into that pipeline system and it will ultimately be used to fuel those vehicle fleets, as well as (some) homes and businesses.”

Regarding the vehicle fleets, information provided by Aria Energy shows that the use of low-carbon fuels results in approximately 70 percent lower greenhouse gas emissions than from equivalent gasoline or diesel-fueled vehicles. According to the U.S. Environmental Protection Agency (EPA) calculations, the Butler County project directly reduces emissions from 5,500 tons of methane and avoids nearly 14,000 tons of carbon dioxide emissions per year, which is the equivalent of removing 600 passenger vehicles from the road.

Sam Pimper is the news editor of the Schuyler Sun. Reach him via email at sam.pimper@lee.net.

Several David City community members spoke out against a proposed mask mandate at the Oct. 14 meeting of the City Council of David City.

Three seats up for DCPS board

Three incumbents and one newcomer are running for three open seats on the David City Public Schools Board of Education.

Jacob Witter has his eyes on obtaining the rank of Eagle Scout and, for his required project, has been assisting with the renovation of Jaycee…

U.S. Sen. Deb Fischer completes a ribbon-cutting ceremony on Friday, July 26, at the Butler County Landfill while being accompanied by representatives of Waste Connections, Aria Energy and Black Hills Energy. The event was held to commemorate the renewable natural gas project happening at the facility.

U.S. Sen. Deb Fischer addresses a crowd on Friday, July 26, at the Butler County Landfill. A ribbon-cutting ceremony was held commemorating the renewable natural gas project happening at the facility.