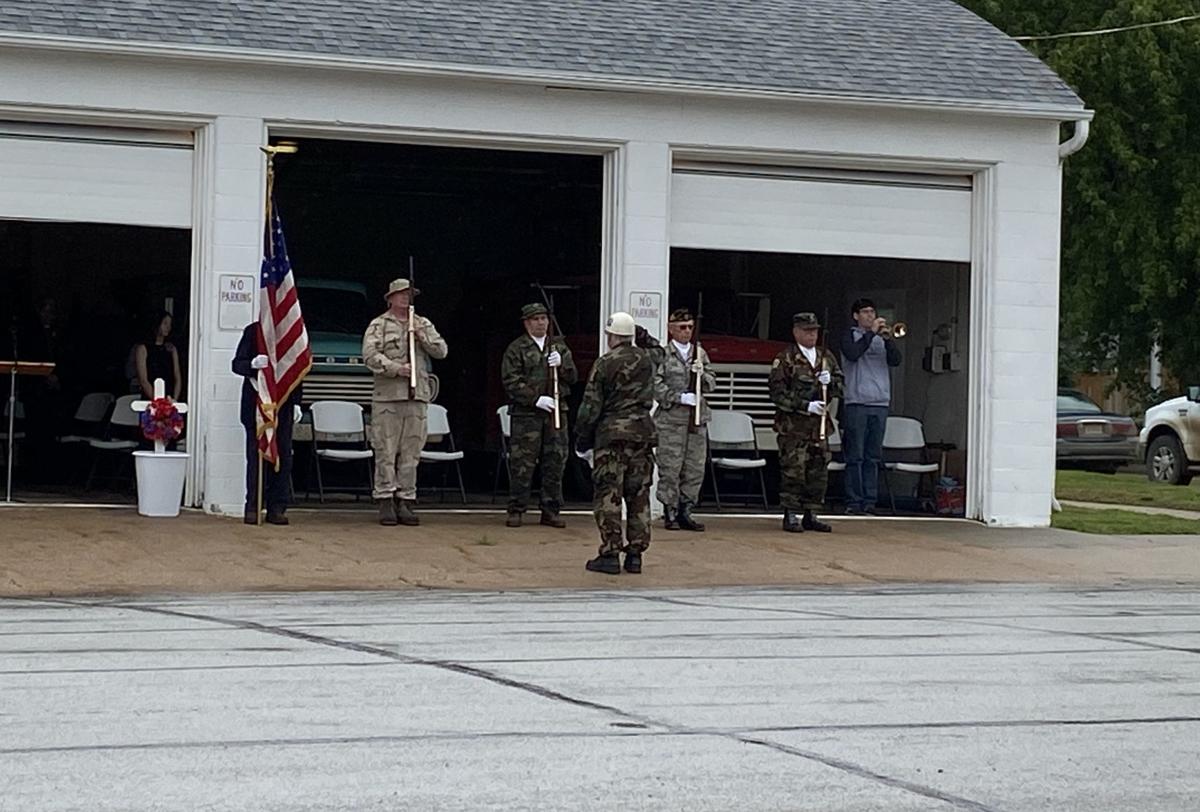 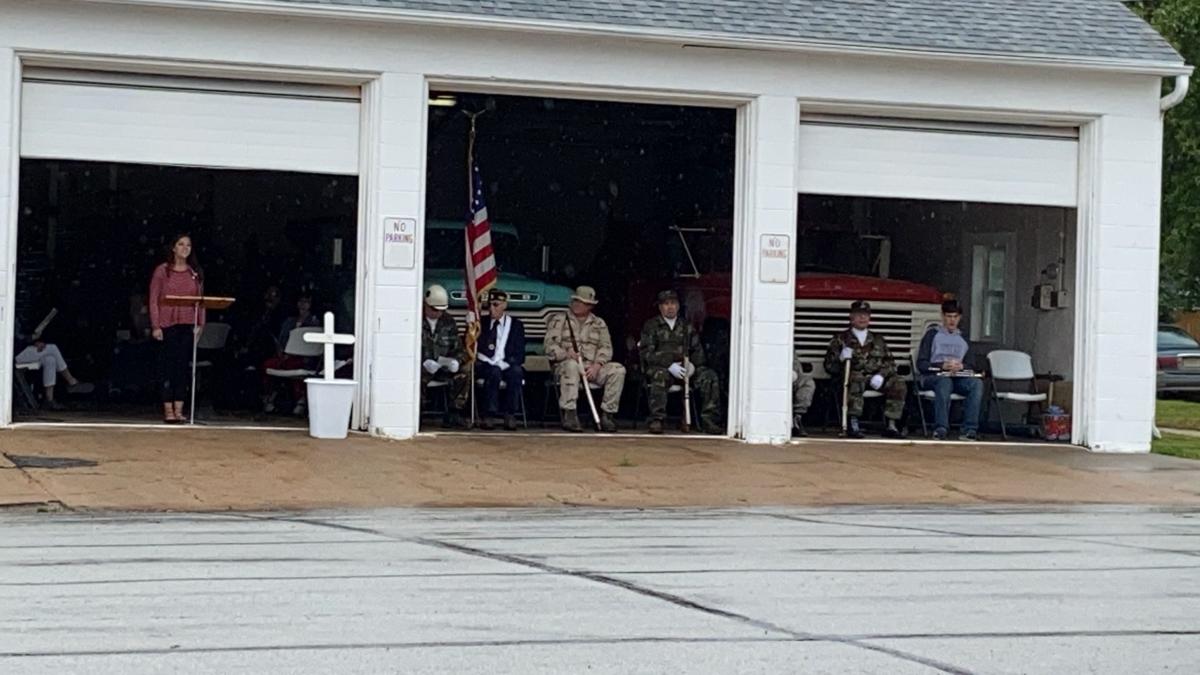 Alyssa Blohm sings a patriotic song during Rising City's Memorial Day ceremony Monday morning. Visitors were asked to stay in their vehicles and listen to the program via radio. 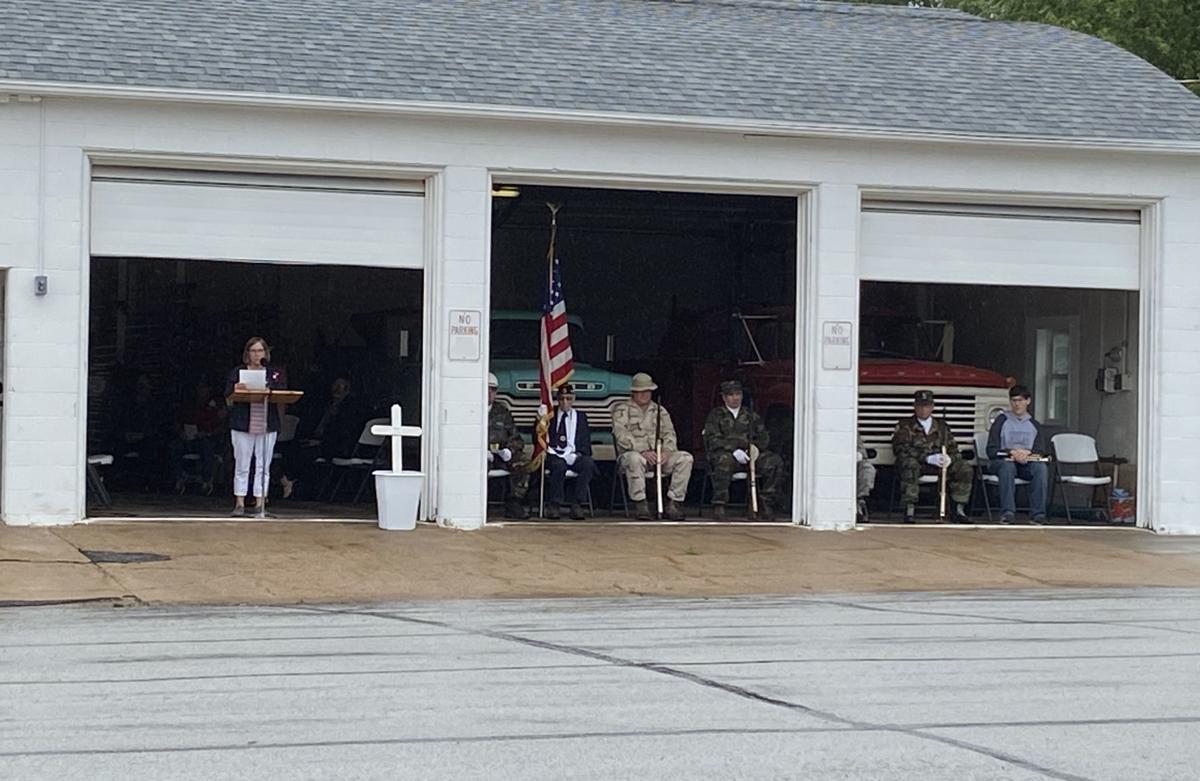 The original plan had been to hold the services at Circle Mound Cemetery as usual but the chilly, rainy weather caused the ceremony to be moved to Rising City Community Hall. According to Bemis, almost 130 names were included in this year’s Avenue of Flags; if not for the rain, the flags would have been displayed. However, the traditional sprays and smaller flags were able to be placed at soldiers’ graves.

To follow social distancing guidelines, visitors were asked to stay in the vehicles and tune into the program which was aired on radio station 93.9. The only other change to the program was the removal of a guest speaker.

“It’s unfortunate that we have to meet this way, but I appreciate everybody that has come to help celebrate and remember our fallen heroes and veterans,” Janet Bemis of the Auxiliary said during the ceremony.

The Rev. Palomaki gave the invocation, as well as the benediction at the ceremony’s closing.

Sanley also read a piece titled Honor by The Rev. Paul Ziemer, which details the importance of honor in serving your country.

It starts with an 18-year-old young man who, though he doesn’t want to go to war, he still enlists because he was bound to honor his family and country. The nameless soldier came back home with both physical and mental injures that changed the course of the rest of his life.

“When we honor the fallen on Memorial Day, we also honor those who served with them, who paid a price but lived,” Sanley read.

In the usual tradition, the Auxiliary presented the Honor Roll of Flags and Rick Sanley placed the Memorial Wreath.

The Honor Guard salute was completed by David City American Legion and Veterans of Foreign Wars combined unit, along with taps.

“I want to thank everyone again for coming. I wish we could have had it at the cemetery this morning,” Bemis said. “This is something everybody’s going to be able to tell their children, grandchildren, even maybe some of the great-grandchildren, that in 2020 we all had to be quarantined for basically the spring, and all of the circumstances that have gone into our country.”

Even though a smaller crowd attended than is usual, Bemis was satisfied with the turnout.

“I was pretty pleased with how it all turned out,” Bemis said. “I think the people enjoyed being able to get out and have somewhat of a program.”

Hannah Schrodt is the news editor of The Banner-Press. Reach her via email at hannah.schrodt@lee.net.

Alyssa Blohm sings a patriotic song during Rising City's Memorial Day ceremony Monday morning. Visitors were asked to stay in their vehicles and listen to the program via radio.