The Aquinas Catholic volleyball team dealt with various injuries in Kelly Tvrdy's second season, but persevered through a tough schedule to reach a subdistrict final in its first season in Class D-1.

Tvrdy was proud of how hard her team worked, which featured just 11 players.

"We knew that we had a tough schedule ahead of us," Tvrdy said. "Our goal was just to keep improving each game."

"I think the fact that we had such a tough schedule being in the Centennial Conference kind of prepared us for districts," Tvrdy said." I do believe it also kind of hindered our ability as well just because we are caught at times because of the losses that were on the board playing C-1 teams in the Centennial Conference, which is a really great conference to be a part of. Sometimes, games that we probably should've won or done better at, I think our confidence wavered a little bit."

For the seven players who are returning next year, Tvrdy said she hopes this season's schedule will help prepare them for the rigors of another tough campaign.

"I think the big thing is going to be, since we'll be in D-1 against next season, to know that our schedule is a tough schedule," Tvrdy said. "We just have to go out and perform at our ability and do our job and that's all we can control and to not let that hinder how we feel about ourselves as a team heading into districts."

Tvrdy said she thought the offense had an up-and-down kind of season.

"I think that we should've made some smart decisions on placing the ball. I think a lot of times we struggled finding open spots on the court," she said. "We had some really tough hitters. I just think we could've been a little bit smarter about placing, which is something we'll work on heading into next season."

Defensively, Aquinas had to be scrappy to stay in matches. Tvrdy praised libero Allisen Jelinek for leading the Monarchs in that regard.

"She (Jelinek) really went after a ton of balls that were probably not even hers," Tvrdy said. "We stayed on our feet for the most part and did a good job being disciplined and getting to our stops."

The biggest area of improvement Tvrdy said was in serve receive. Compared to last season, Aquinas didn't hurt itself as much in the back row and made consistently better passes.

"There were times that we struggled a little bit, but towards the end of the season, we started just having almost the same passers every single serve receive rotation, which in my opinion, created a form of consistency," Tvrdy said. "I think that's when we started to really see big strides in our passing game."

Tvrdy said she felt Aquinas played as a team and communicated on the court. She praised Hilger and Novacek for doing a good closing the block with their height and quickness.

Novacek, Birkel, Reiter and Wollmer were the four seniors on the squad. In a transition year they were helpful in bringing the group together.

"They did a great job. They were great leaders the entire season. I would see them in the middle of practice pulling freshmen aside, helping them with their technique, whether it'll be Gracyn (Wollmer) pulling aside another younger outside hitter helping correct her approach to Aubrey (Novacek) helping out on the middle block because we do have a lot of young middles on our JV team," Tvrdy said. " They also led by example. They were hard worked, they were determined, they came in focused every day, so I was very impressed and I felt very lucky to have them this season."

Aquinas had to shuffle up its rotations three or four times due to injuries. Next season, Tvrdy hopes to build more consistency along with continuing to improve its passing.

"I'm seeing some of those younger hitters coming in and filling role very nicely and girls who were on the court this year, stepping up and helping those other girls be leaders on the court," she said. "I'm going to see more consistency next year for sure."

Sam Ficarro is a sports reporter for the Banner-Press reach him via email at DVDsports@lee.net.

Hoping for improvement but winning just one more game than the year before seems to indicate little evidence of progress. But a deeper look is… 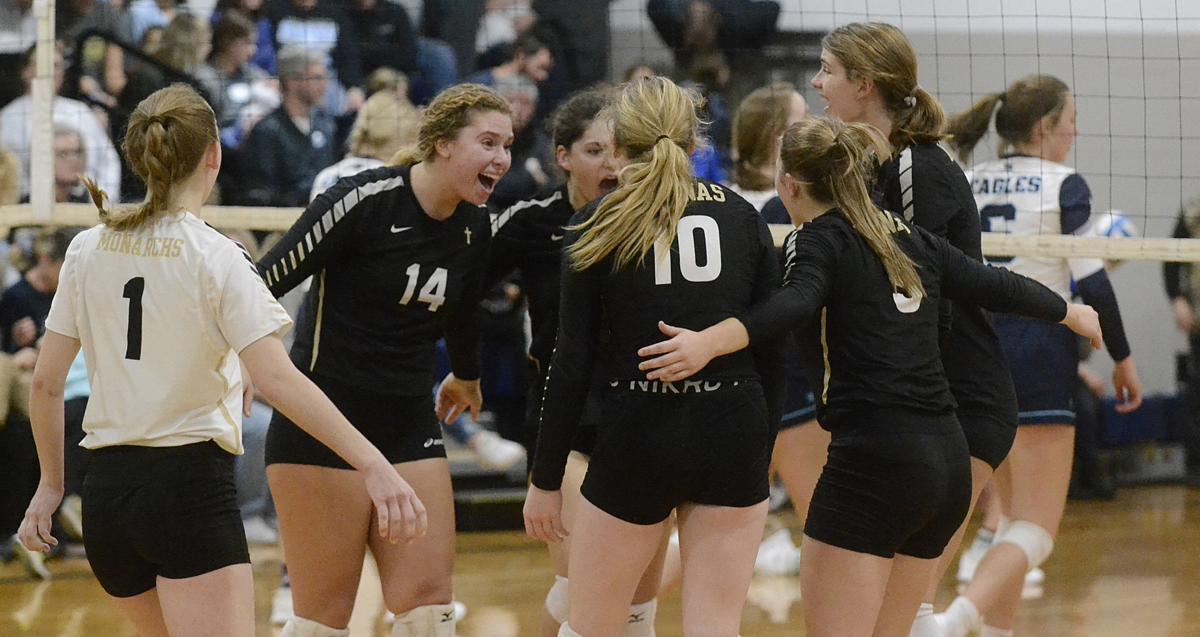 The Aquinas Catholic volleyball team celebrates after winning a point in the third set against Nebraska Christian on Oct. 26. The Monarchs posted an 11-21 record in its their season in Class D-1. 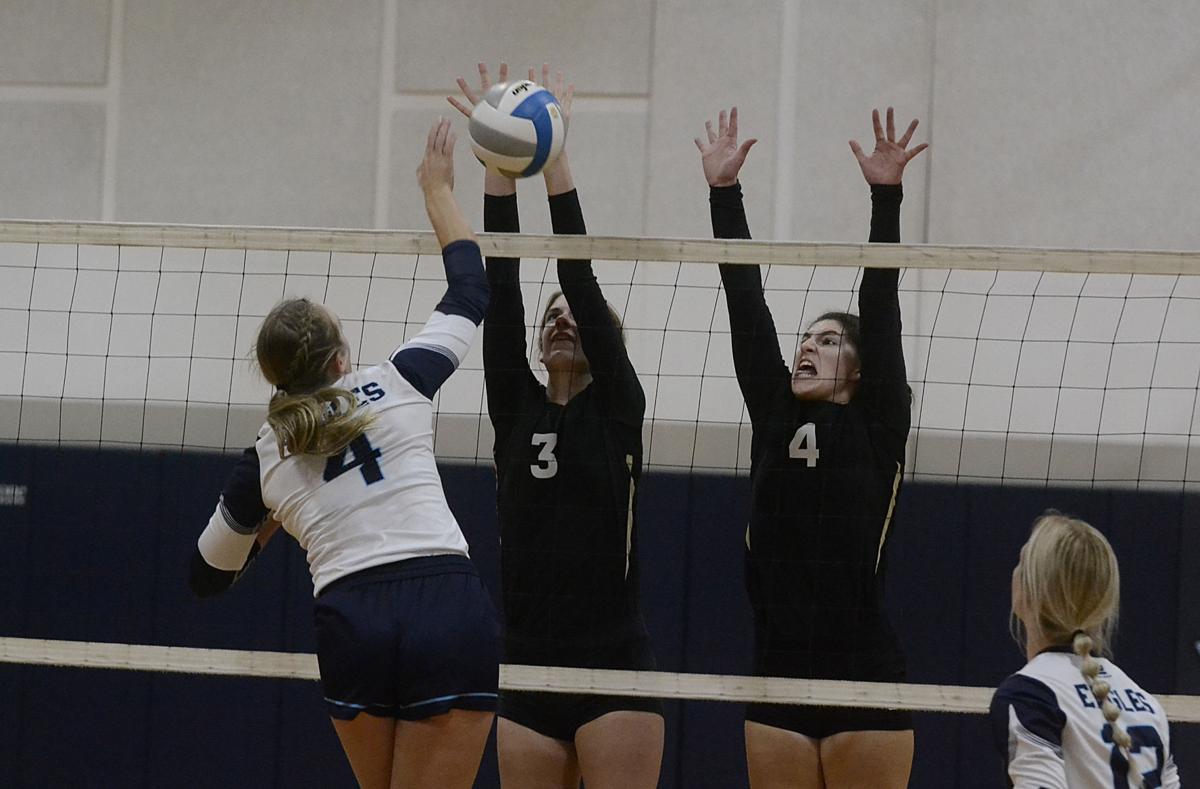 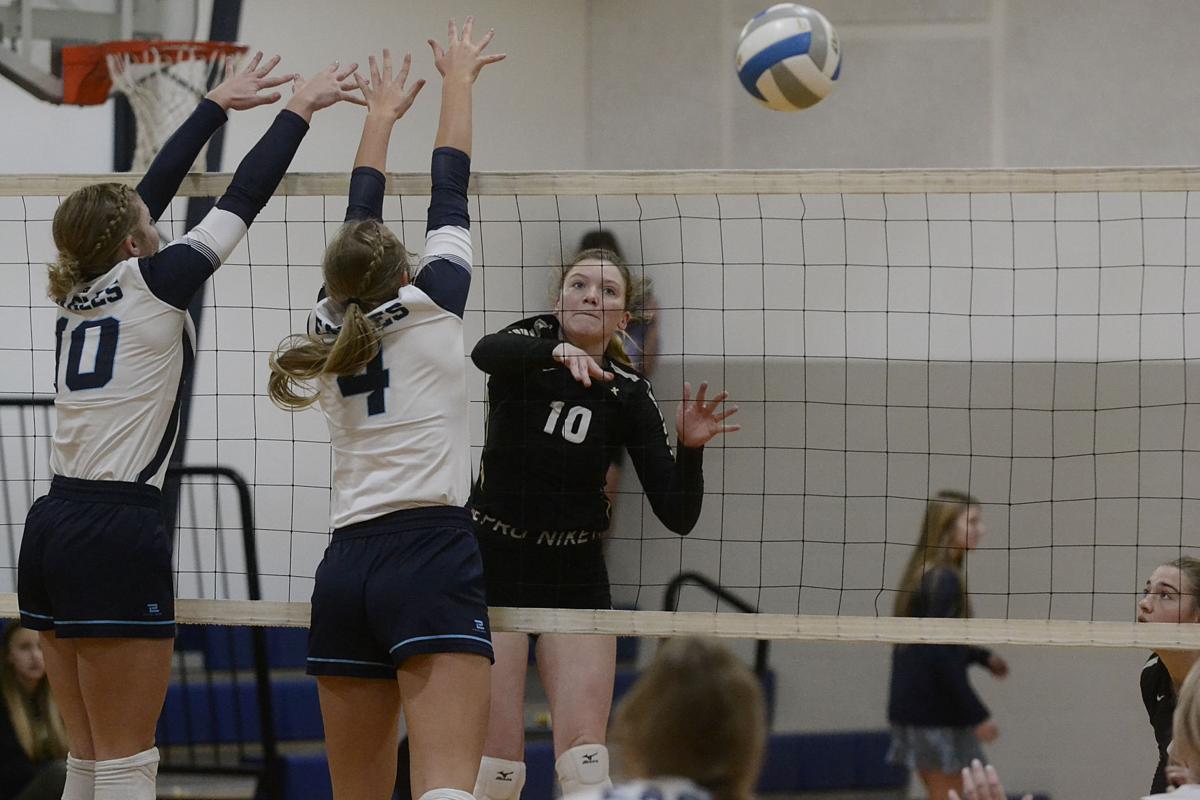 Aquinas Catholic's Grace Reiter attempts a kill in the first set against Nebraska Christian on Oct. 26. Reiter was one of four seniors this fall for Monarch volleyball.