David City and Shelby-Rising City entered Tuesday's matches with winning records. The Scouts are 5-4 with half of their losses coming to Class B competition.

The Huskies entered Tuesday's triangular having won seven of its last eight matches. Their only losses were to Class C-1 No. 1 North Bend, 10-1 Cross County and to 8-3 Riverside.

David City (5-4): The Scouts had a week off in between matches, splitting a triangular on Sept. 13. It swept Milford 25-16 and 25-21 thanks to nine kills and three blocks from Avery Couch.

Malcolm, ranked No. 8, ended David City's four-game winning streak winning in three sets 20-25, 25-10, 25-11. The Clippers were led by Diamond Sedlak and Halle Dolliver as they combined for 29 kills. David City finished with 17 kills.

Couch and Behrns are leading the Scouts attack with 69 and 56 kills, respectively. Andel's 108 assists is the most on the team with Smith second with 78.

Kuhlman leads the team with 68 digs and 16 service aces. Behrns is second on the Scouts with 64 digs. Andel posted 54 digs and 13 aces.

On the season, Ava leads the Huskies with 91 kills. Liberty is second with 68 kills and Zoey Walker recorded 41. Pinneo comprised 198 of the team's 228 assists.

The Huskies featured balanced production defensively as five have recorded at least 40 digs. Alex is the top digger with 71 with Liberty one dig behind her. Ava is third with 68 digs, Pinneo posted 55 and Brooklynn recorded 43.

Aquinas has lost to ranked teams in Class D-1 No. 10 Hastings St. Cecilia and C-1 No. 2 Kearney Catholic. It lost to 7-4 West Point GACC and twice to 10-4 Humphrey/Lindsay Holy Family.

After Tuesday's match, the Monarchs will host East Butler and Friend for a triangular before competing in Saturday's David City Invite.

East Butler (8-10): East Butler is tied with Alma for the most matches played among D-1 teams entering Tuesday.

Rathjen is the top digger with 206 digs. Pernicek tallied the second-most digs with 134. DeWitt and Haney recorded 128 and 121 digs, respectively.

David City volleyball was the runner-up in its home tournament Saturday, defeating Shelby-Rising City and Twin River in pool play. In the cham…

For the first time since Oct. 24, 2019, East Butler football won a game. The Tigers snapped their 16-game losing streak Friday night with a 60… 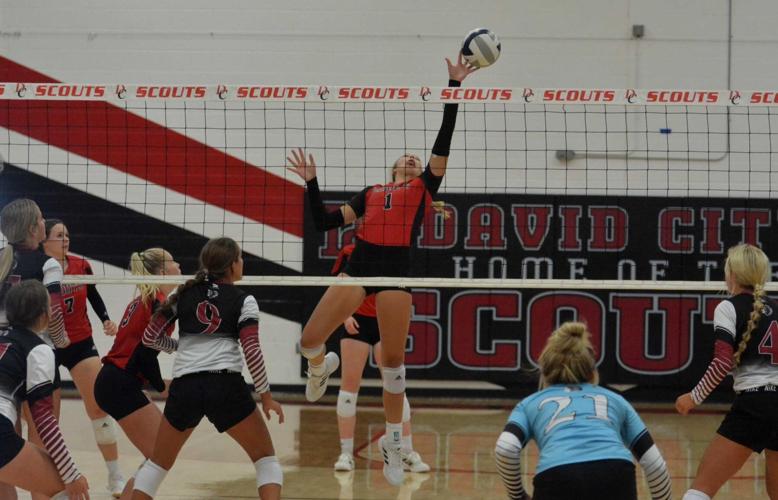 David City senior Avery Couch tips the ball over the net on Aug. 16. Couch leads the Scouts with 69 kills this season. 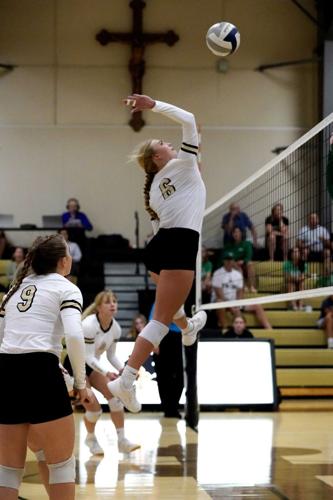