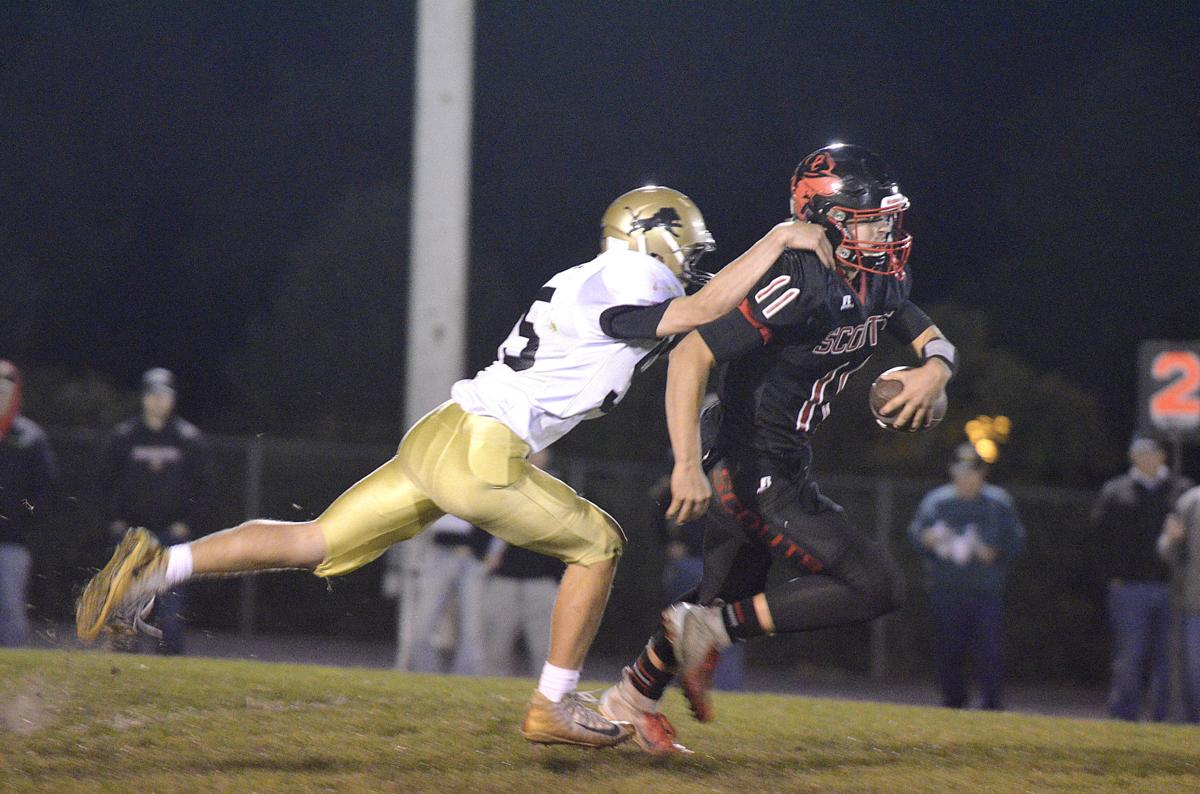 Will Danielson tries to avoid a tackler in the Sept. 28 matchup between Aquinas and David City. Danielson and the Scouts went 4-5. 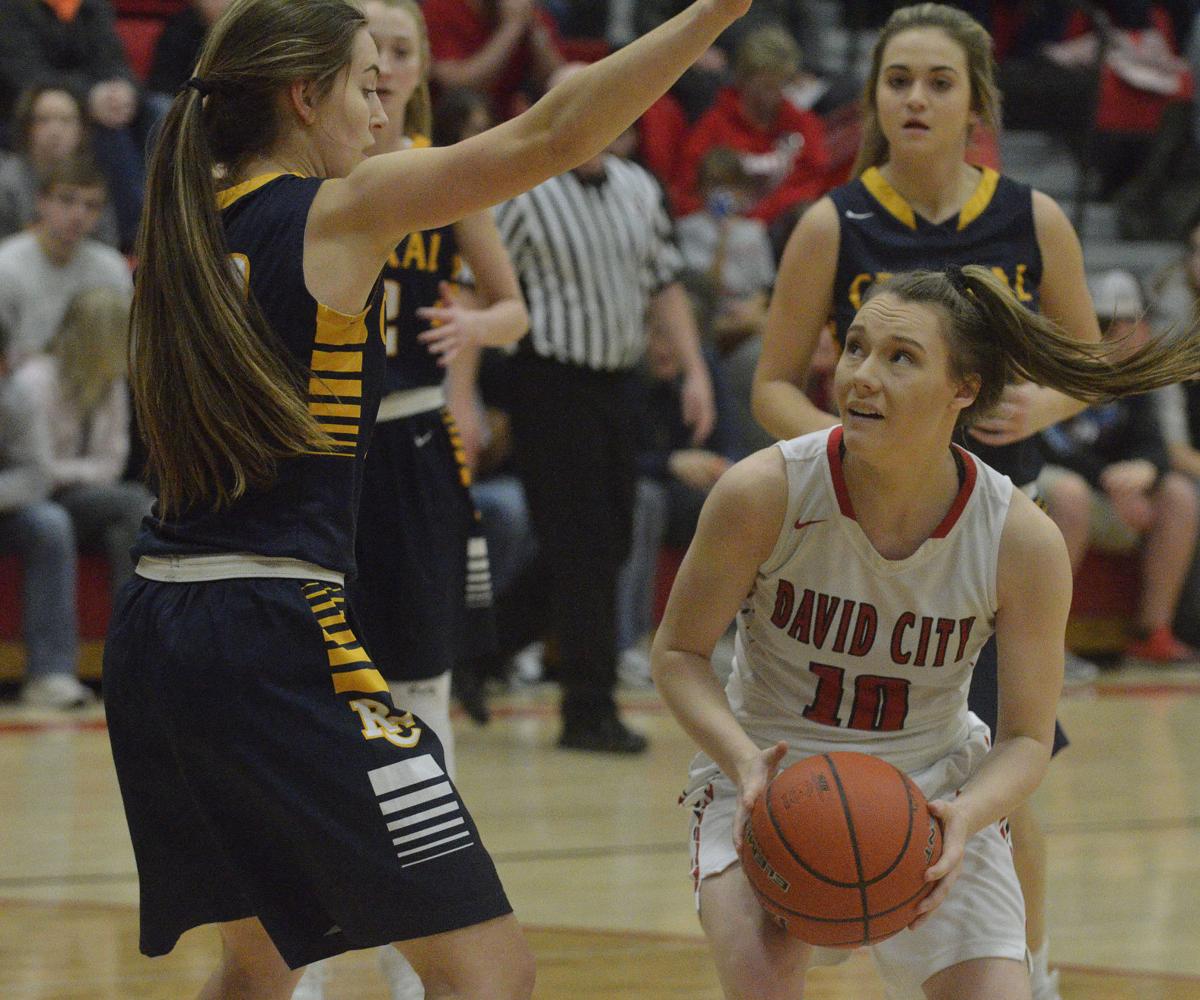 David City's Macy Svoboda goes up for a basket against Raymond Central on Jan. 8. Svoboda and the Scouts went 6-16 on the year.

Postseason Summary: Did Not Qualify

Season Highlight: Defeating Shelby-Rising City 21-6 on Sep. 21. S-RC ended the season 6-4 and qualified for the playoffs.

How it ended: David City finished the season with a 34-16 loss at the hands of North Bend Central. The Scouts fell behind 13-0 in the first quarter and gave up 14 points in the third quarter during the loss.

How it ended: The NSAA did the Scouts no favors putting them in a district that included an opening match with the top team in the state. Wahoo hit .419 for the match and went on two weeks later to win its second straight state championship.

Future Outlook: David City has a junior heavy team with four returning starters. New head coach Tali Reeves will be looking to take advantage of the juniors talents over the next two years.

How it ended: David City was unable to qualify any runners for state and had its season end at districts.

Future Outlook: James Escamilla and Carter Ossian graduated, leaving the Scouts with a void at the front. However, the cupboard isn't exactly empty. Success will depend on new runners seizing opportunities and displaying the work ethic necessary to be consistent point scorers.

Postseason Summary: Blue River went 1-2 in the B-4 district playoff. The Panthers lost 13-1 to Crete in the opening round, defeated Aurora 11-6 in the first round of the consolation bracket and then lost 12-2 to Fairbury to end the season.

Season Highlight: Defeating Aurora in the loser's bracket of the district tournament keeping the season alive.

How it ended: Fairbury controlled a 12-0 lead by the top of the third and never let Blue River find its grove.

Future Outlook: The Panthers only lose four seniors and will be looking to pull in some players from last year’s JV squad. They return some pitchers and will look to be competitive during the season.

Postseason Summary: Lost 79-31 to Wahoo in the first round of the sub-district playoff.

How it ended: A loaded sub-district including two of the top five teams in Class C-1, according to the Lincoln Journal Star, proved to be too steep a hill to climb for David City boys basketball. The 20-3 Warriors dictated the terms early, jumped out to a 22-9 lead through the first eight minutes and controlling play the rest of the way.

Postseason Summary: Lost 67-21 to Wahoo in the sub-district playoffs.

How it ended: Three Warriors scored in double digits for a Wahoo squad that lead 24-4 after the first eight minutes.

Future Outlook: Lauren Vandenberg and Neely Burns became key players for David City throughout the season and will be instrumental for new head coach Beth Bohusvlasky to find success in the win column.

Postseason Summary: Made the state tournament and finished eighth as a team. Jordan Kracl led the team finishing tied for 19th.

Season Highlight: Qualifying as a team to the state tournament.

Postseason Summary: At the state meet, Christian Faz and Carter Ossian competed in the triple jump, Clayton Denker placed seventh in the 400 and also ran in the 200. Macy Svoboda competed in the long jump.

Season Highlight: Denker medaling at state in the 400.

How it ended: David City boys finished 46th as a team in Class C, Christian Faz finished 14th in the triple jump and Carter Ossian took 17th.  Denker took 16th in the 200 and Macy Svoboda finished 16th in the long jump.

Future Outlook: Clayton Denker will returning for his senior season and hopes to be joined by teammates at the state meet. The new year will also bring first-year head coach Tali Reeves first season.

Aquinas Catholic senior Ben Kment was part of a dual win over crosstown rival David City a year ago at the state duals in Kearney. It had been…

Class C No. 3 Aquinas wrestling won its fifth tournament championship of the year on Saturday at the Schuyler Invite in a field loaded with Cl…

Aquinas Catholic senior Isabel Coufal drew contact on an offensive rebound, made the shot and the ensuing free throw and gave her side a one-p…

Monarchs rally in second half to defeat Pierce

Aquinas girls basketball head coach Nathan Wall was not very pleased with how the Monarchs performed in the first half of a home game Jan. 9 a…

Aquinas boys basketball fired out of the gates, locked down opposing shooters all game and won a second straight game on Saturday at home, 56-…

East Butler boys and girls basketball teams traveled to Dorchester on Jan. 16, finding a 65-29 blowout win for the boys and dropping a 41-37 l…

East Butler boys basketball lacked energy in the early going of a home game against Nebraska Lutheran on Jan. 14 but turned it up after halfti…

East Butler faced some of its toughest competition of the year on Jan. 16 during the Butler County Triangular at Aquinas facing off against Cl…

Shelby-Rising City boys and girls basketball teams swept Nebraska Lutheran on Saturday with the boys winning 80-53 and the girls winning 42-30.

After losing its first 10 games of the season, David City boys basketball earned its first win of the year on Jan. 14 defeating Raymond Centra…

Will Danielson tries to avoid a tackler in the Sept. 28 matchup between Aquinas and David City. Danielson and the Scouts went 4-5.

David City's Macy Svoboda goes up for a basket against Raymond Central on Jan. 8. Svoboda and the Scouts went 6-16 on the year.