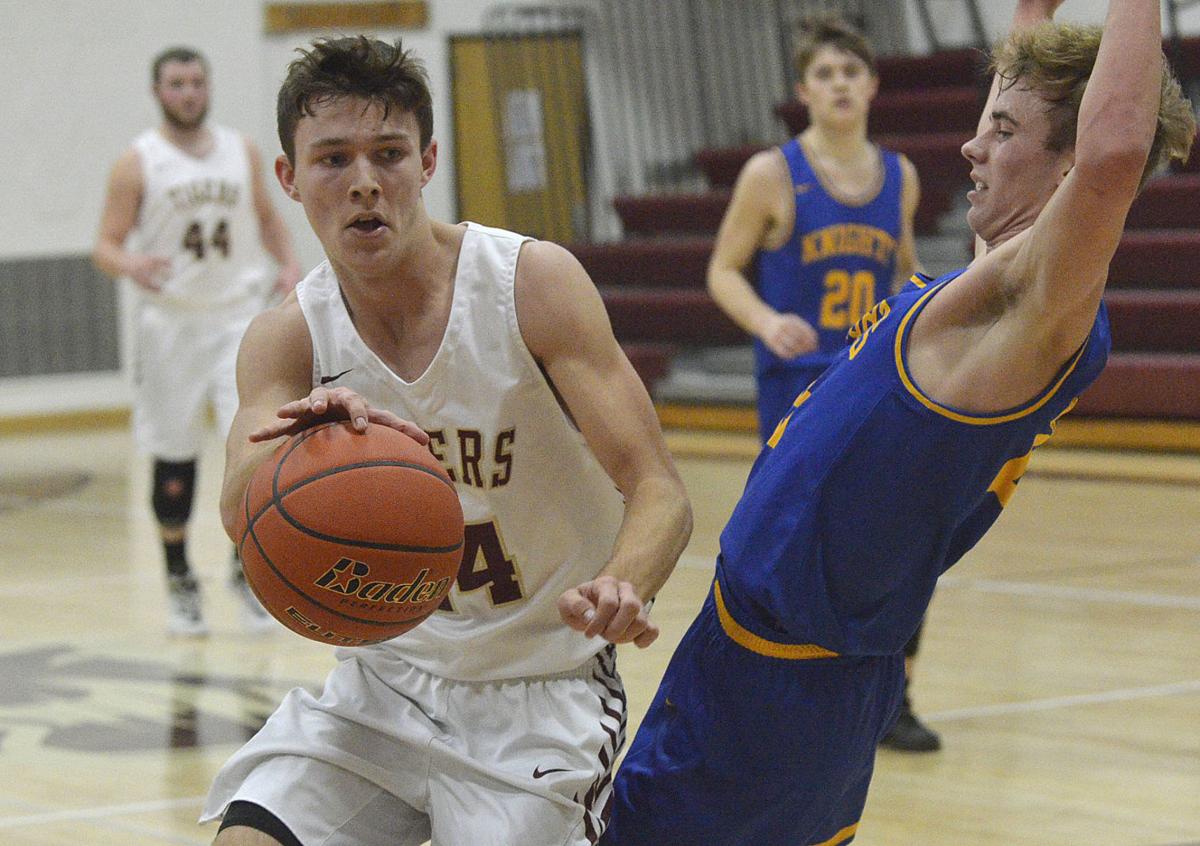 East Butler senior Jaden Rhynalds slips around a defender in a win over Nebraska Lutheran earlier this year. Rhynalds helped lead East Butler to a subdistrict championship this season. 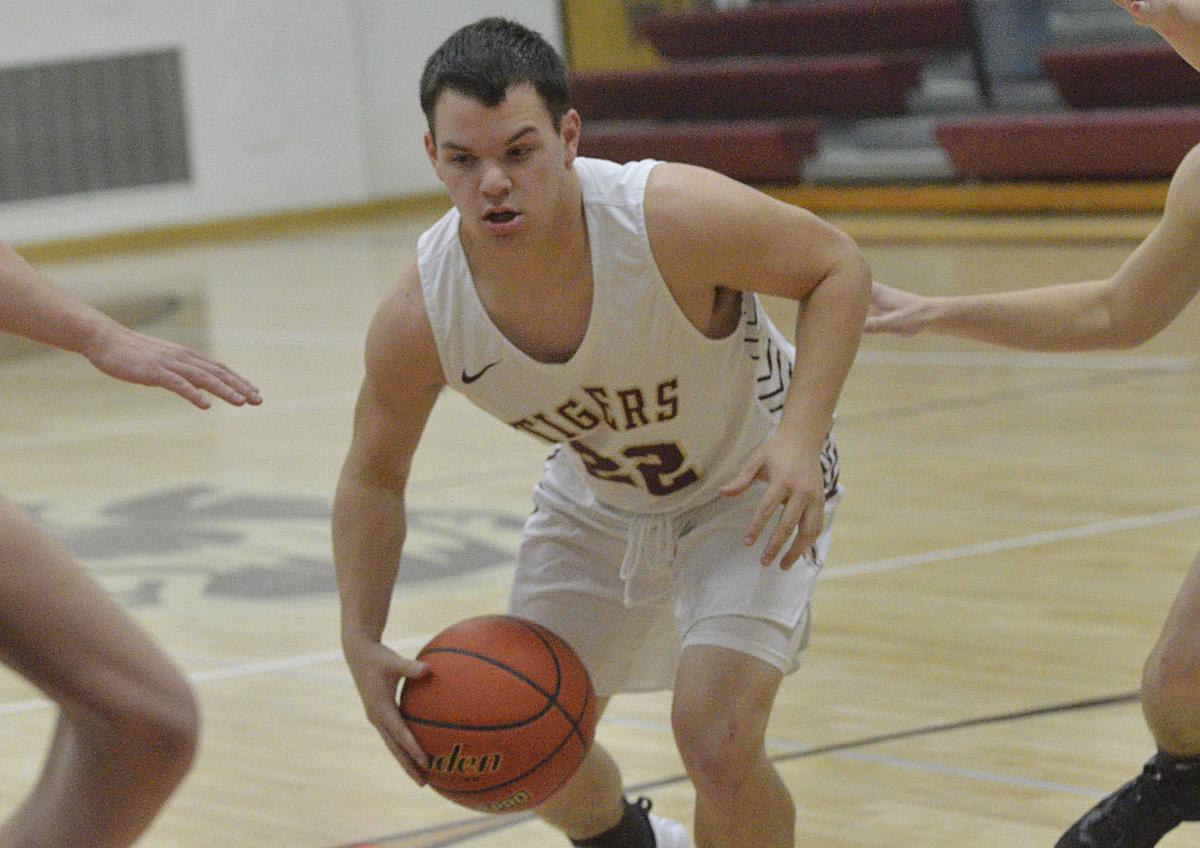 East Butler senior Austin Pierce drives the lane in a game earlier this year. Pierce was part of an East Butler team that was one win away from the state tournament.

East Butler senior Jaden Rhynalds who will leave the program with multiple school records and accomplishments. The last accomplishment he left behind, and possibly most significant, was leading East Butler to its first March game in 10 years.

Rhynalds and Tigers put together a 14-9 record including a subdistrict championship.

He did all of that averaging 25.3 points a game, third in the state according to Maxpreps. He also finished in the top 20 in the nation in steals per game with 5.7.

In games where Rhynalds scored 30 or more points, the Tigers went 6-1. The only loss was to D-1 No. 4 North Platte Saint Patrick's in the district finals.

His most offensive game came on Jan. 14 with 42 against Waco Nebraska Lutheran in a 67-49 win.

Maybe most importantly, Rhynalds and his teammates came together when it mattered most.

"The 2020 group was a group that had everyone back from the previous season," head coach Greg Jahde said. "What we needed was to have players mature and develop around Jaden. That is exactly what took place. Our understanding and knowledge of our offense, as well as improving our anticipation on defense, really helped along the way."

Before the season even started, East Butler was eyeing a chance to play in a district title game.

Everything seemed to be on track to reach that goal when the Tigers opened 11-3.

East Butler then ran into trouble starting in the conference tournament after losing to eventual champion Cross County in its first game.

The Tigers then went 1-4 in their next five games to close the regular season.

East Butler found its mojo again in the subdistrict tournament, going 2-0 to clinch a spot in the district finals.

Rhynalds scored nearly 32 points per game in the subdistrict tournament, including 34 in a 68-31 win over Cedar Bluffs and 29 in the 64-41 subdistrict final over Omaha Christian Academy.

Rhynalds did everything he could to help East Butler upset St. Pat's, scoring 30 points, but the team fell 69-51 after the Irish scored the first 10 points of the game and led wire-to-wire.

"(Making districts) was a goal of ours before the season even started," Jahde said. "We played a really good St. Pat’s team in that final. We pushed them to their limits and made them earn their trip to the state tournament.

"I think we definitely reached our potential. We knew what we had as a team and did what we needed to do to get better, and be playing our best basketball at the end of the season when it mattered the most."

Losing a perennial All-State player, and one of the best players in program history in Rhynalds, will be a difficult hurdle to overcome. But Jahde believes the Tigers are in position to have a successful season next year.

"I think we will be fine," he said. "Maybe won’t be as successful in the win column as we were this year, but I think that there are enough pieces still in place that we will be just fine. It is nearly impossible however to replace a player of Jaden’s ability."

Toughness is a term often overused and not accurately applied. But in a season that included comeback wins, a subdistrict final upset and a tr…

Husky Girls: Learning on the fly

Despite scoring under 30 points a game, Shelby-Rising City girls basketball put together a 10-win season.

The spring sport season was scheduled to begin its first contest on Thursday, but a memo sent out by the NSAA on Monday changed all of that.

For the first time in four years, East Butler girls basketball posted a winning record with a 12-10 mark in the 2019-20 season.

David City girls basketball had no senior leadership and a first-year head coach leaving many unknowns to what this season would hold.

East Butler senior Jaden Rhynalds slips around a defender in a win over Nebraska Lutheran earlier this year. Rhynalds helped lead East Butler to a subdistrict championship this season.

East Butler senior Austin Pierce drives the lane in a game earlier this year. Pierce was part of an East Butler team that was one win away from the state tournament.