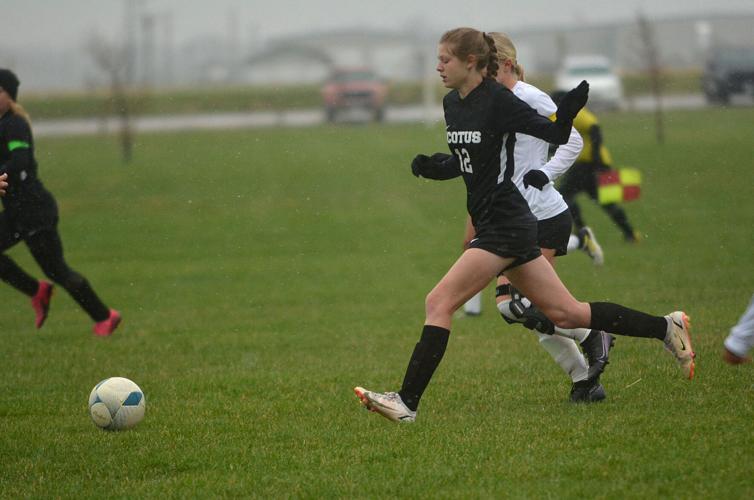 Aquinas freshman Izzie Kadavy leads the break up the field for the first goal of the game in a 10-0 Scotus win Monday over South Sioux City. Kadavy assisted on the first goal and scored the second. 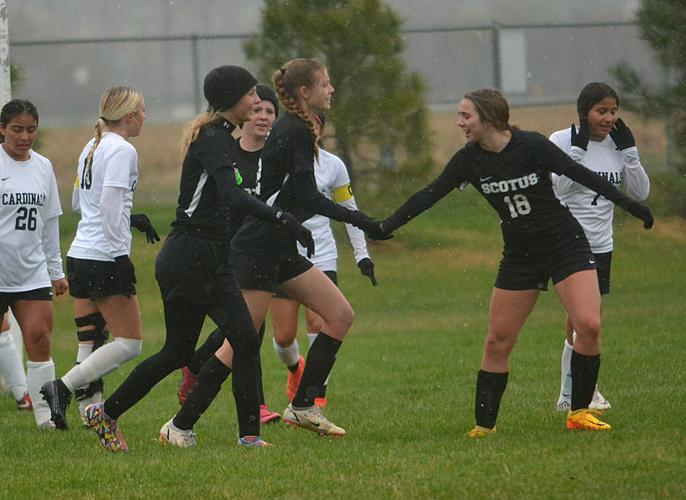 Teammate Shelby Brandenburg (18) greets Izzie Kadavy after her goal made it 2-0 Scotus in Monday's subdistrict win.

Aquinas Catholic freshman Izzie Kadavy assisted on the first goal, scored the second and the Scotus Central Catholic girls were off and running to a 10-0 subdistrict win on Monday at Wilderness Park in Columbus. Kadavy and the Shamrocks advanced to Tuesday afternoon against Lutheran High Northeast for the right to play in a district final.

For all intents and purposes, neither game was necessary to move Scotus to within one win of state. The Shamrocks started Monday third in the Class B points standings and would advance to the district final regardless of Monday or Tuesday's results. Still, the 'Rocks weren't looking to simply back into a chance for state.

If anything, facing wind, rain and cold, Scotus was hoping mostly to avoid injury while dispatching an opponent that it should in easy fashion. Kadavy's part in the first two goals started an onslaught that had the Shamrocks ahead 5-0 before the match was seven minutes old.

They added another before halftime and four more in the opening minutes of the second half for the mercy-rule win.

"That was my main concern - let's get this thing over with," Scotus coach Kristie Brezenski said. "It's always good to start that way. It gives us a little confidence builder. They're starting to really compete and want to win and realize what we're capable of. We've just got to keep taking steps that way."

For Kadavy it was her 12th goal and third assist of the season for 27 points - third behind sisters Emma and Libbie Brezenski.

Scotus had four total goal scorers. Emma put five in the back of the net for the second time this season, put together her fifth game of a hat trick or more and has nine games with multiple goals including each of the last three in which she's scored 11 times. The freshman also added three assists and sits at 72 points - the most in Nebraska.

Libbie had a hat trick of her own, and junior Maysa Kuhl scored her second goal of the year. Keeper Faith Weber was never required to make a save.

Kadavy's 27 points are fourth among all freshmen in Nebraska. She also had a goal last week to put Scotus up 2-0 on Elkhorn North, but the game went into a delay right before halftime and was canceled due to stormy weather. The result, and Kadavy's stats, were made void because of the cancellation.

Scotus won two days earlier, April 26, 8-0 over Hastings during a game in which Kadavy scored twice. Adding in Monday's result gave the Monarch freshman goals in each of the past four Scotus contests.

The 'Rocks had a rematch with one of those four in Tuesday's subdistrict final - Lutheran High Northeast. The Shamrocks defeated the Eagles 4-0 on April 14.

Scotus improved to 13-2 with Monday's win and has won 12 in a row. With a district final likely set for Saturday, the 'Rocks will be looking for a second straight trip to state and their 24th in school history.

Scotus Central Catholic girls soccer and its three members from Aquinas Catholic earned some much deserved time off over the weekend. Followin…

Scotus Central Catholic girls soccer was preparing for a fight against Hasting on Tuesday at Wilderness Park. Although the Tigers had lost fou…

Freshman Emma Brezenski nearly had a double hat trick, three Shamrocks found the back of the net and the Scotus Central Catholic girls ended a…

It wasn't so much payback as it was another step in the process.

OMAHA – The Shamrocks were about to survive 40 minutes of defensive soccer when, perhaps, that very thought crossed their mind and gave way to…

Aquinas freshman Izzie Kadavy leads the break up the field for the first goal of the game in a 10-0 Scotus win Monday over South Sioux City. Kadavy assisted on the first goal and scored the second.

Teammate Shelby Brandenburg (18) greets Izzie Kadavy after her goal made it 2-0 Scotus in Monday's subdistrict win.