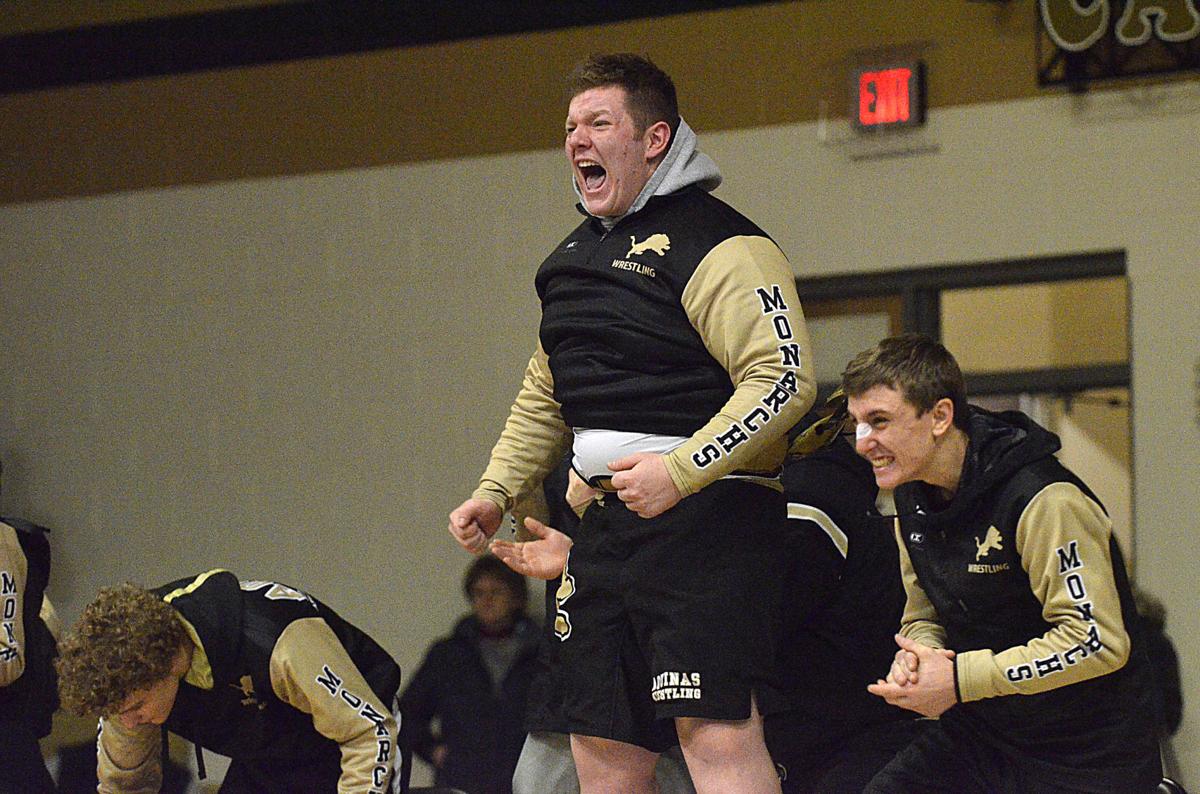 Aquinas senior Owen Schramm and teammates jump for joy after defeating David City in a dual on Thursday 34-27. 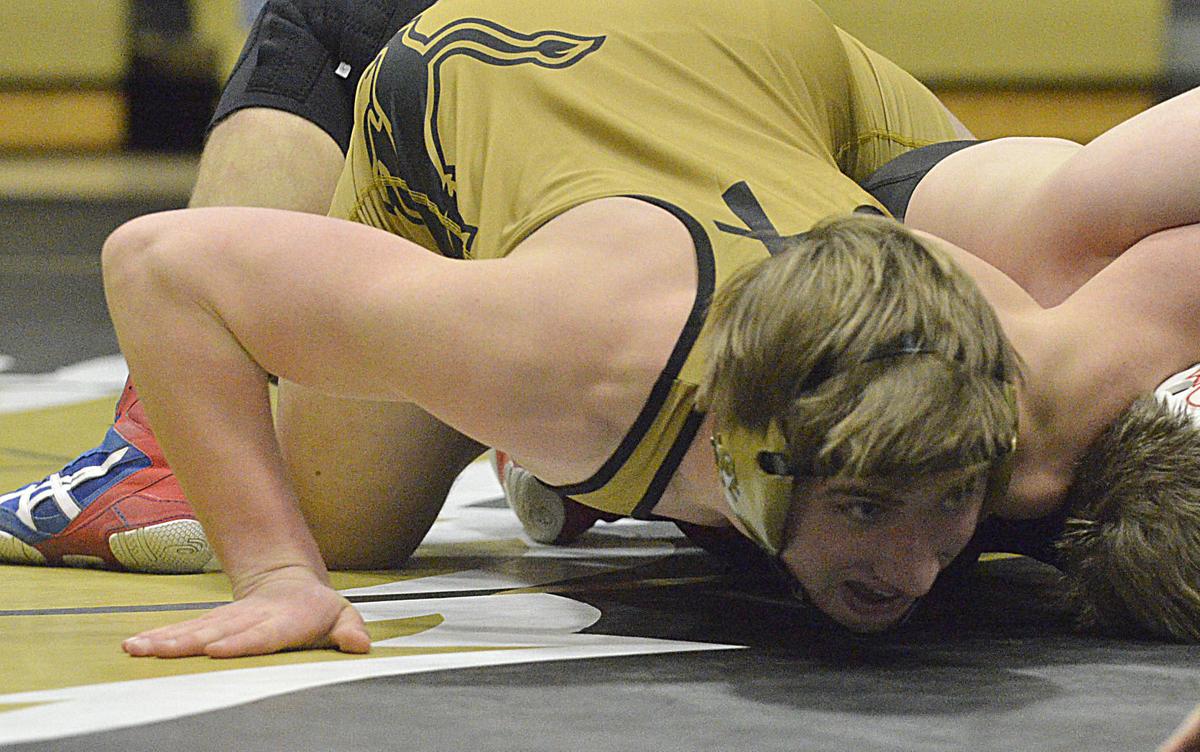 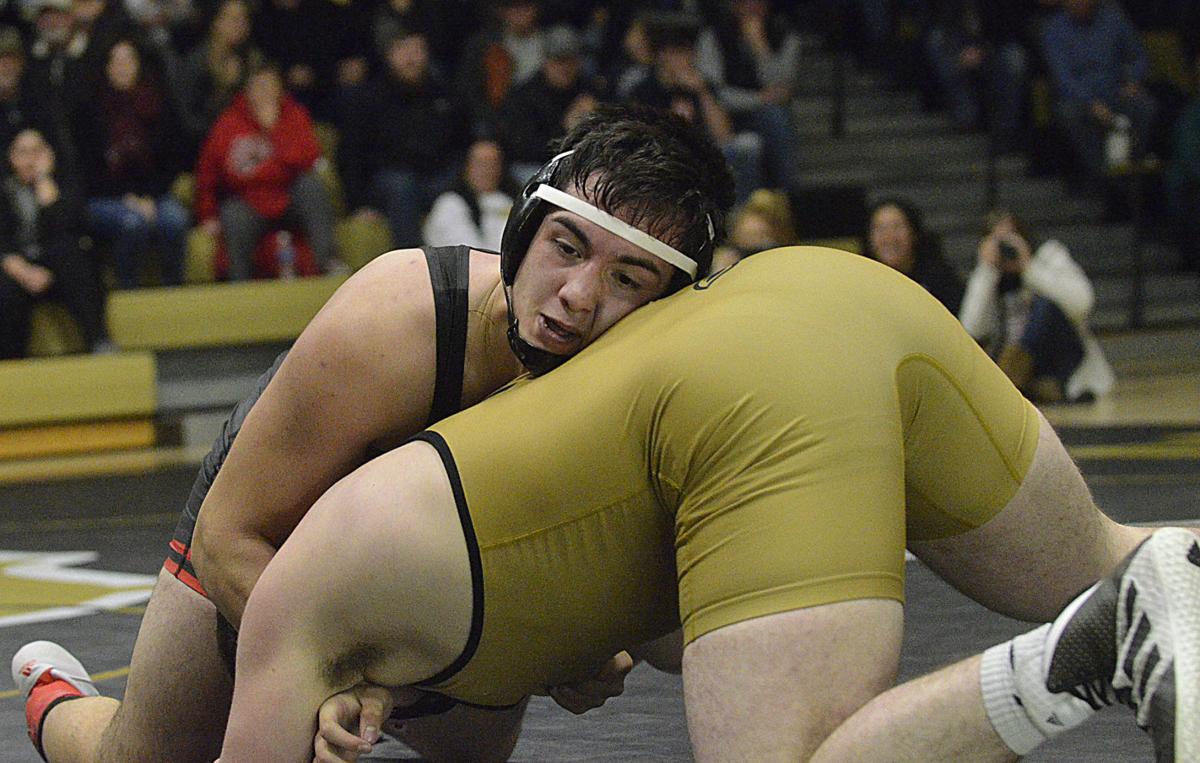 James Escamilla stuffs a takedown from Aquinas on Thursday. 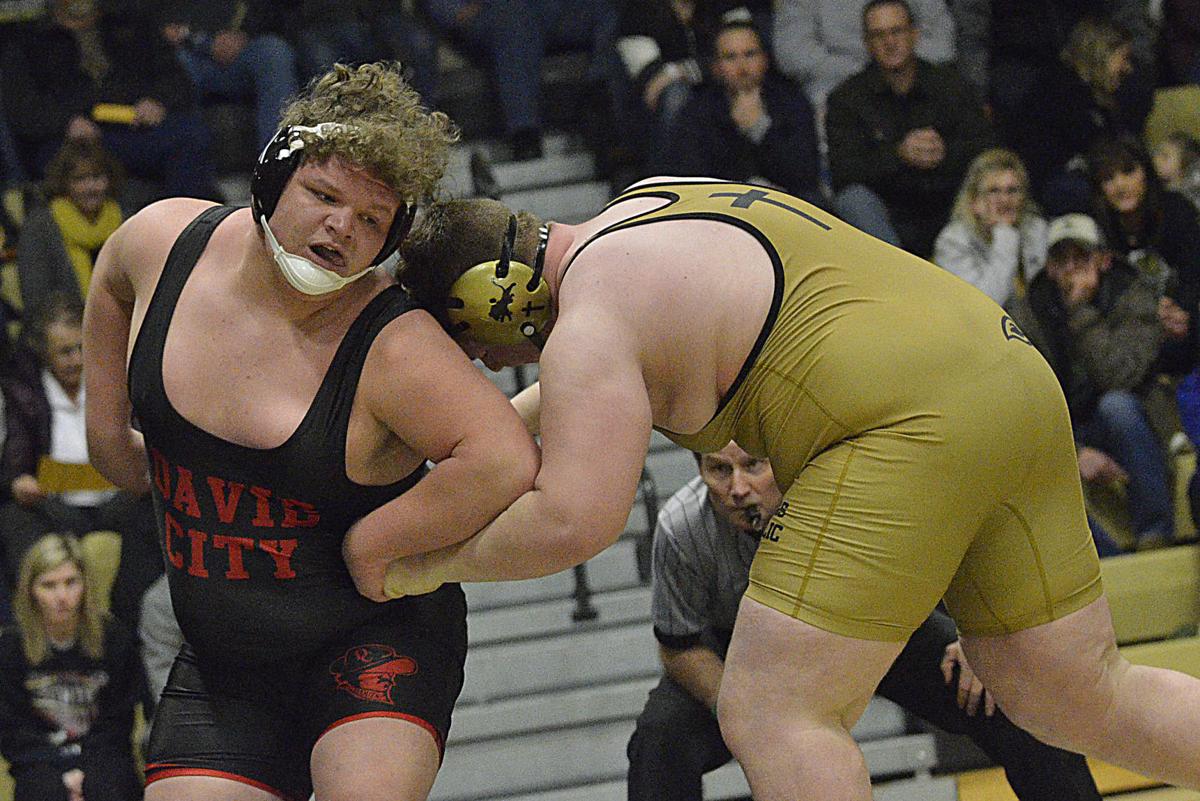 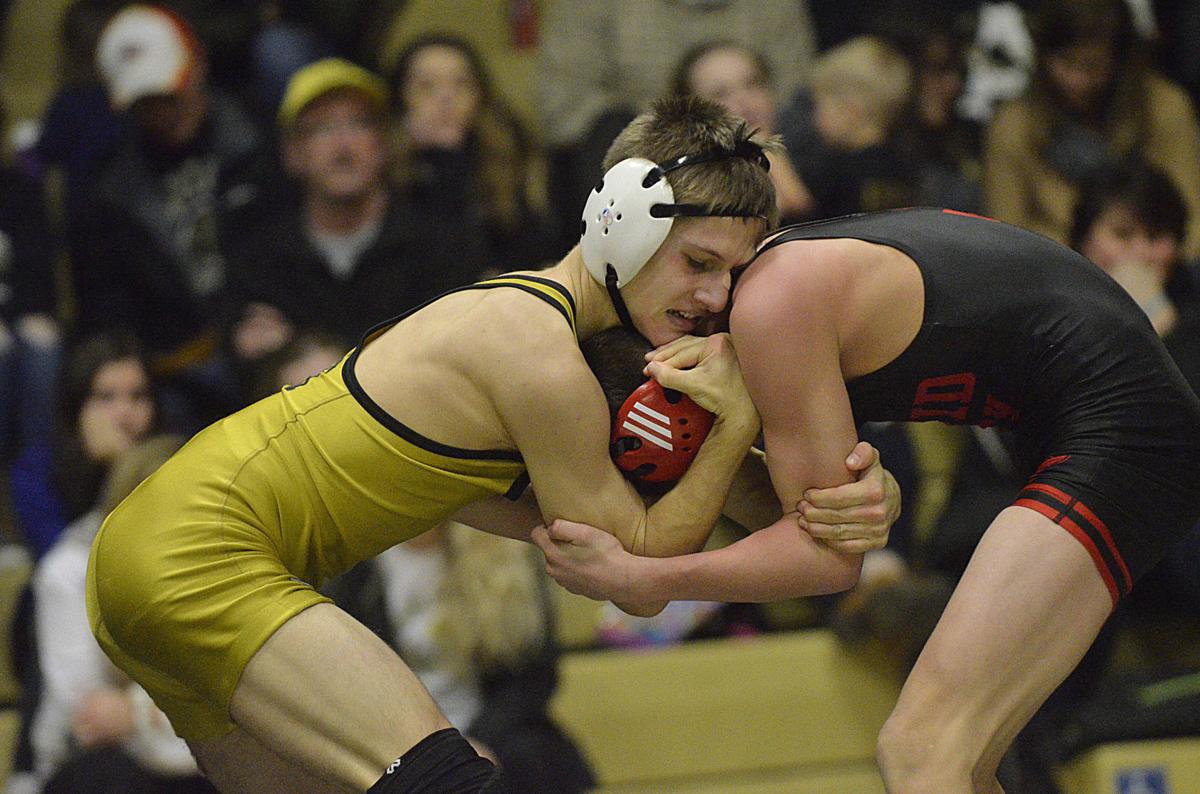 Zander Kavan looks for the takedown against David City on Thursday. 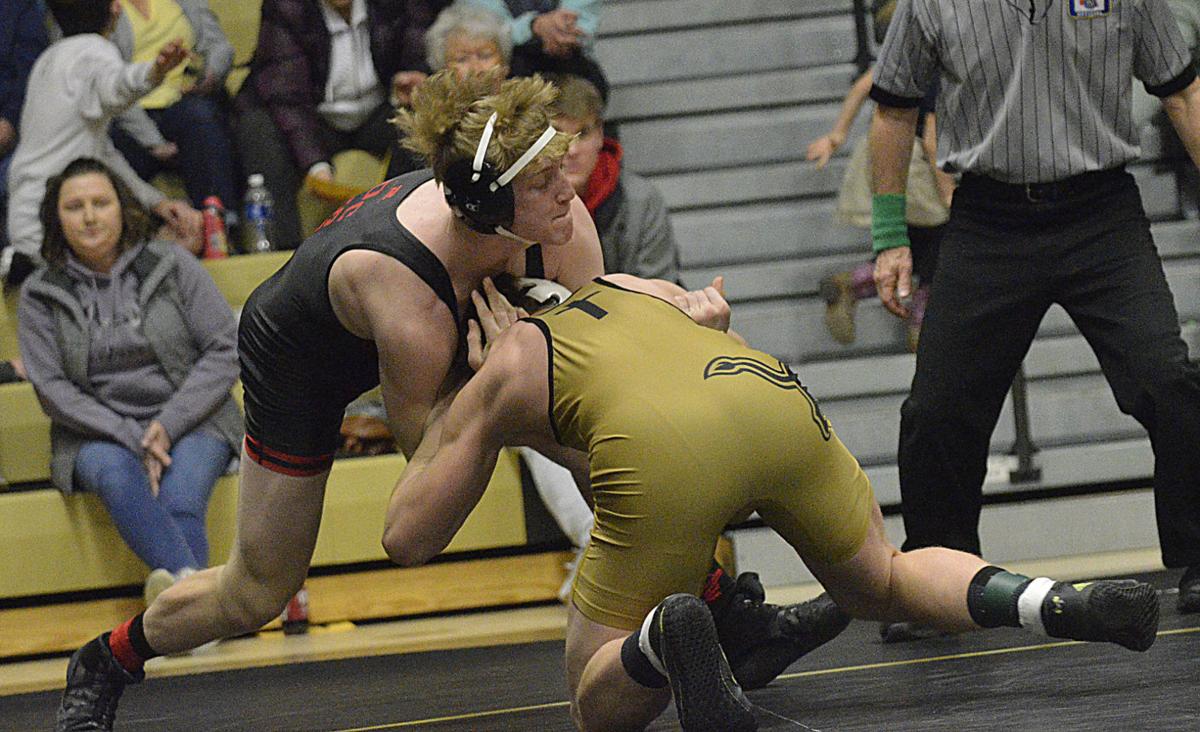 Aquinas Catholic senior Ben Kment was part of a dual win over crosstown rival David City a year ago at the state duals in Kearney. It had been maybe a decade, according to the memory of most involved, since the last time the Monarchs earned wrestling bragging rights over the Scouts.

Jan. 16 he was the reason the Monarchs finally enjoyed a win over the Scouts at home when he earned an upset victory in the final match of the night for a 34-27 final score.

No. 3 Aquinas (8-0) trailed David City 18-0 after the first four matches but battled back and took a late lead.

With only one match remaining Aquinas, led by three when Kment stepped onto the mat for his 182-pound battle with Class C No. 5 Spencer Allen.

Allen could turn the final result in David City's favor with a bonus point win and deny Aquinas the home win it so desperately desired. But Kment seized on the opportunity, took control in the first period and delivered his own bonus point win 8-0 sending Monarch teammates and coaches into a celebration and giving his senior teammates a lasting memory on the final event in their home gym.

"I knew it was going to be a big match," Kment said. "Coach (Roy) Emory came up to me and said it was up to me to win that match, and it was going to make a difference in the dual. I just went out there thinking I have to win this match."

Kment got the Aquinas crowd in a frenzy when he took Allen down to his back and turned him over for a two-point nearfall in the first period to take a 4-0 lead.

He chose to defer his option and Allen chose to start the second on bottom. Kment turned Allen for another two-point nearfall and rode him out for the rest of the period to take a 6-0 lead headed into the third.

The Aquinas senior chose to start the third in neutral and took Allen down one more time to win 8-0, clinching the emotional win. It was the first win for Aquinas over David City in the Butler County duals.

"This win means a lot," Kment said. "It kind of shows that, that win at state duals was not just a fluke. We can come back and win again. It's great."

Kment improved to 20-5 on the season with the win.

"He's a senior and it was his last home dual," Emory said. "I knew he was going to get it done for us because he's a tough kid, and he's worked really hard for four years. He's really made himself into a really good wrestler. I was proud of him."

No. 4 James Escamilla defeated No. 3 Nolan Schultz, 4-3 at 195, No. 2 Wayne Moore pinned Coy Meysenburg in the second period at 220, No. 4 Jake Ingwersen defeated Owen Schramm in sudden victory at heavyweight and No. 7 Zach Bongers pinned Grady Romshek for an 18-0 lead.

Zander Kavan finally got Aquinas on the board when he defeated Simon Schindeler 4-3 at 113. No. 2 Hunter Vandenberg then started a Monarch winning streak at 120 with a pinfall over Ethan Zegers in the second period.

Starting at 138, Aquinas started to move around its lineup to secure favorable matchups.

The gamble paid off as Nickolite defeated Valentine 8-5 after scoring two takedowns and a three-point nearfall in the first, tying the dual up at 21-21.

Aquinas made another lineup adjustment at 152, putting in Michael Andel at 152 where he pinned Harley Eickmeier in the first period giving the Monarchs a 27-21 lead.

The Monarchs put 152 No. 2 Nolan Eller in at 160 to face off against Tre Daro. Eller was close to a pinfall multiple times and almost pulled off a major decision, but a reversal and two-point nearfall by Daro in the closing seconds closed the gap to 12-6 in favor of Eller.

No. 1 Dylan Vodicaka kept the Scouts in the match at 170 after pinning Paul Buresh in the first period closing the gap to 30-27, setting the stage for Kment vs. Allen.

"We started off a little slow in a couple of toss-up matches early," Emory said. "We didn't come out on top, but the kids are resilient and they bounced back and won some big matches towards the end."

Aquinas' decision to switch around a couple of weights comes from the confidence in the second and third wrestlers in each weight class.

"We think we have a lot of depth and we can move guys around and throw some JV guys in," Emory said. "We were just looking to get the matchups that we thought were best for us."

David City has hit a tough slide recently, edging out dual wins against Syracuse and Milford and being left out of the championship round at the Norm Manstedt Invite last weekend.

While the past couple weeks have been a gut check for the Scouts, head coach Tahner Thiem is hoping his group uses the recent struggles as motivation.

"I think we won some of the toss-up matches, but we lost a lot of the matches that I think guys thought they would walk through," he said. "Tough night. The team is kind of in a tough spot right now. Aquinas is a great wrestling team. Over half of the matches were matches that could go either way.

"Unfortunately for David City, Aquinas won more of those swing matchups, and they won those with bonus points, so that really hurt us."

"I think it's going to sting for a few days and that sting is going to carry over into practice and that's exactly what we want to happen," Thiem said. "I talked to the team a little bit about how we won last year at this thing and they beat us at state duals. I'd rather have the trophy from the state dual tournament than this. You want to win all the time, but I think this is just going to be fuel to the fire for our guys for the rest of the year."

Aquinas senior Owen Schramm and teammates jump for joy after defeating David City in a dual on Thursday 34-27.

James Escamilla stuffs a takedown from Aquinas on Thursday.

Zander Kavan looks for the takedown against David City on Thursday.