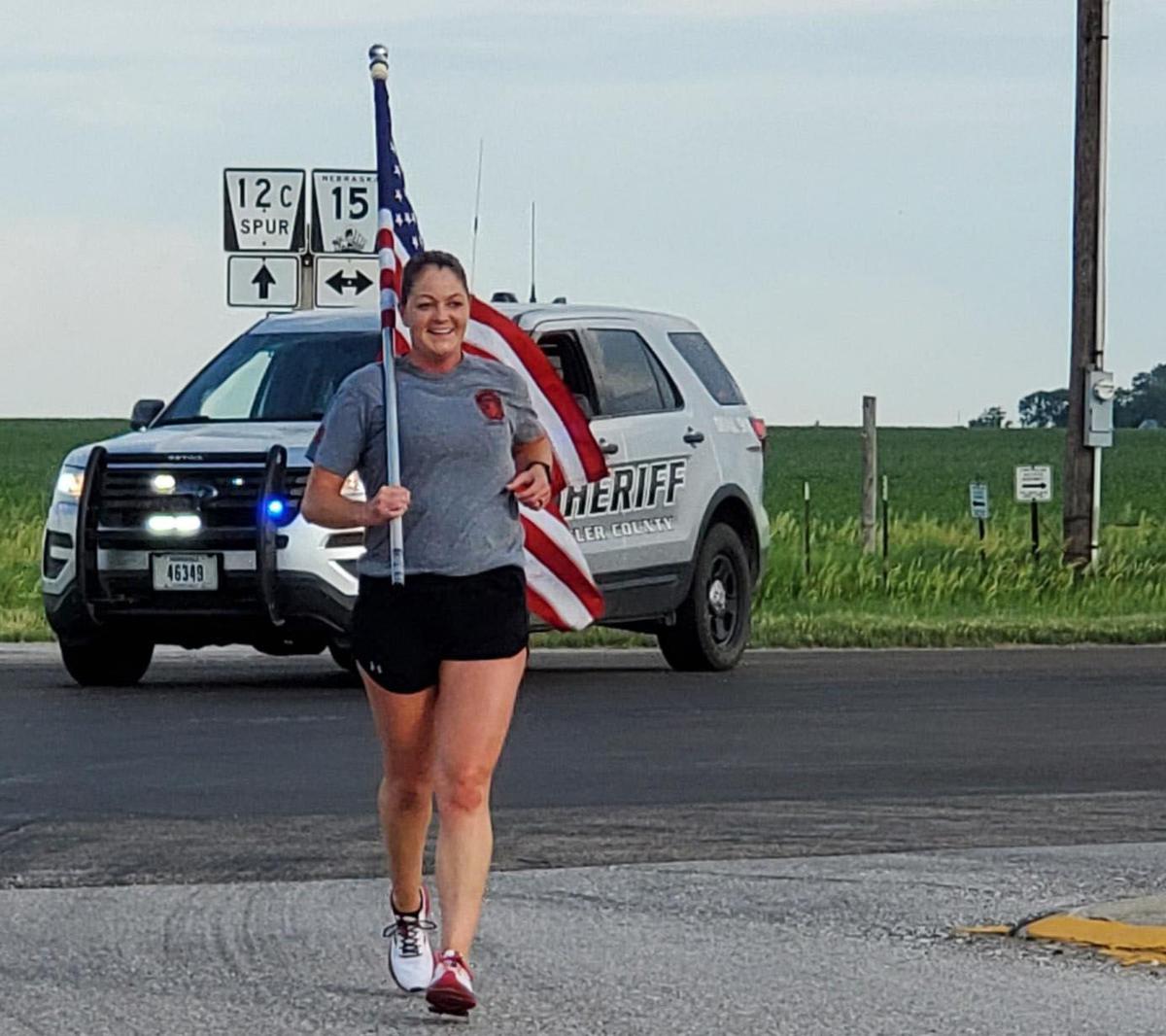 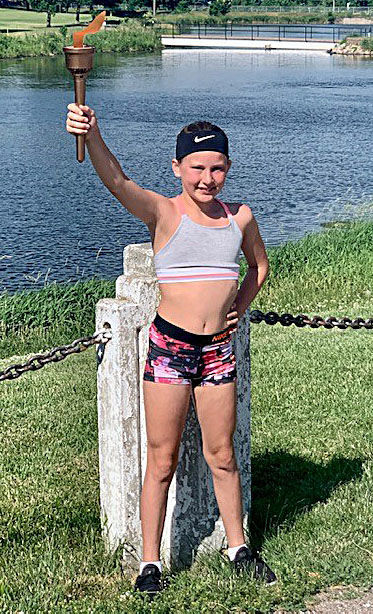 Faith Samek holds a torch after running one mile in the Cornhusker State Games Virtual Torch Run on June 15.

Faith Samek and Patti Lee-Smith represented Butler County in the 2020 Cornhusker State Games Torch Run on June 15. The event, typically held on Nebraska's highways and byways as a lead up to the July Games was held virtually due to the COVID-19 pandemic.

Unlike previous years, the runners ran without a physical torch and completed their leg of at least one mile from a location somewhere in their area, neighborhood or home.

Once runners completed their leg of the torch run they submitted a photo via email or social media.

Lee-Smith runs to represent the Nebraska Army National Guard. She ran three miles in her seventh year of participating in the torch run.  In the past three years, she has represented her current unit, the 1969th Combat Control.

Additionally, this summer will be the fifth year that Lee-Smith has competed in the Games. She has ran in the 5K road race three times and in the 10-mile race during the State Games of America.

She said she didn't notice a difference with the torch run going virtual this year.

"I coordinated with law enforcement, which, generally, the Nebraska Sports Council does," she said. "I coordinated, for safety, obviously, on the highway with the sheriff's office."

With no physical torch, Lee-Smith carried the American flag on her 3-mile leg.

"Other than not carrying the torch or not having the Nebraska Sports Council people with you, there wasn't a lot of difference," she said. "They had a larger turnout because it was virtual. I think there were more runners actually completing miles across the state that they do traditionally."

Lee-Smith said being a member of the running community at large is what keeps her coming back. Every summer is a chance to see old faces and meet new ones.

"I just think the running community in itself and the comaraderie," she said.

When she's not running in the Cornhusker State Games, Lee-Smith is often competing in half-marathons.

She started participating in the torch run as a way to shine a spotlight on her job with the Nebraska National Guard.

"The torch run allowed me an opportunity to represent my Nebraska Army National Guard unit in a public forum," she said.

Faith Samek participated in her first torch run after competing in the Games for three years.

"It was fun and I was glad I got to do it for our county," she said. "I like running, so it was something to do in the summer during the quarantine."

Samek is looking for more success after doing well in her last few appearances. She normally competes in many track meets throughout the summer, but is limited to just the State Games in 2020 after the virus canceled most other events.

Samek will be running in the 100 and 400-meter dashes and competing in the long jump.

"I'm just going to do my best and try to get some medals," Samek said. "I'm doing all the same events. It's something fun to do."

Samek said it's the high level of competitors that gets her excited to keep competing in the event each year.

"It's good competition," she said. "And, I get to get my energy out. I have a lot of energy and I just like competing."

Samek also wanted people to know the torch run is open to anyone and is hoping to see more participation in the event next year.

Bank of the Valley blasts Hooper/Scribner, picks up first win

Without a postseason to end the 2020 abbreviated Legion season, the Shelby-Osceola-Stromsburg Seniors at least had somewhat of a taste what it…

Faith Samek holds a torch after running one mile in the Cornhusker State Games Virtual Torch Run on June 15.