The Monarchs won the 3200 relay in addition to 14 other medals and were 18 points back of champion Arlington. The Eagles had a total of 106 points.

The Aquinas boys won 13 medals that included three silvers and were fourth with 58 points. Host Lakeview nearly doubled the field on a score of 165 and were 80 points ahead of second place Malcolm.

The runner-up trophy made it two invites in a row in which the Monarch girls earned a team trophy.

Both the boys and the girls were set for Saturday's Centennial Conference championship at Pawnee Park in Columbus before the combination of cold, wind and rain canceled the event.

The Monarchs wrap up the regular season on Thursday at Fremont Bergan then host the district meet May 12 with nine other teams.

"Another good day for our girls team with plenty of PRs - 12 in total," coach Tony Smith said. "Our theme going into the meet was 'compete'. I believe we did a good job of that across all events."

The 3200 relay team that consisted of Bianca Romshek, Jocelyn Stara, Elizabeth Roh and Gianna Frasher cut nearly 10 seconds off the best time of the season and won the event in dominant fashion. Scotus was 23 seconds behind.

Each of those four also contributed in other events. Romshek was fifth in the 1600 on a time almost nine seconds better than her previous best mark. Stara ran the opening leg of 400 and 1600 relays that netted her a silver (400) and bronze (1600). Those teams also sent PRs. Roh was fourth in the 800 in a time that was more than a three-second improvement. Frasher was the runner-up in the 800.

Ava Hilger won a pair of medals in the sprints. she was the 100 runner-up and the 200 bronze medalist. Veronica Reimers took fifth in the 200 and sixth in the high jump. Miriam Frasher was more than two seconds better in 400 but settled for second place by just about a second and was behind her best time in the 300-meter hurdles but picked up another silver.

Grace Reiter in the triple jump hit a top mark of 33 feet, 2 inches and was third. Aubrey Novacek landed at 14-11.25 in the long jump and was sixth.

Perhaps the top performance of the day, according to Smith, was in the 3200 where Sydney Hartman competed for the first time and ran 14:59.80 for bronze. She plus the throwers crew and Miriam Frasher also impressed the head coach.

"(Hartman's" willingness to enter into the 3200 provided the difference of our team finishing alone as the meet runner-up instead of tied for second with Lakeview," Smith said. "The second big notable performances was our throwers group. Although they didn't score any points, five had career PRs. A final notable was Miriam Frasher running the 400 for the first time this season and finishing second."

Bryant Stouffer in the sprints and John Prochaska in the hurdles both won multiple medals on the boys team. Stouffer qualified second in the 100 dash prelims at 11.83 seconds then maintained that position at 11.54 in the final. He was third in 200 prelims at 24.09 then ran 23.69 and was again third.

Prochaska and Stouffer were both also a part of the 400 relay that was the runner-up. Leadoff runner Caleb Thege earned sixth in the 100 in addition to this relay medal.

Stouffer and Prochaska also ran the 1600 relay with Xavier Fiala and Luke Reiter. That team was fourth and better than four seconds ahead of the best prior mark. Reiter picked up sixth in the 400. Fiala was third in the 800.

"It was a good meet in all but two events where we pressed too much," coach Ron Mimick said. "The relays were solid. Prochaska and Stouffer ran well with good times, and we had a lot of PRs."

Gianna Frasher and Grace Reiter won gold medals and the Aquinas Catholic girls were runners-up at the Fred Arnold Invite April 21 in Schuyler.

The Aquinas Catholic girls track and field team placed third at the Boone Central Invite on April 12. It took home a dozen medals with Ava Hil…

Aquinas Catholic took home 22 medals at the Puetz Memorial on March 29 in Columbus, opening the season with a pair of silvers. Gianna Frasher … 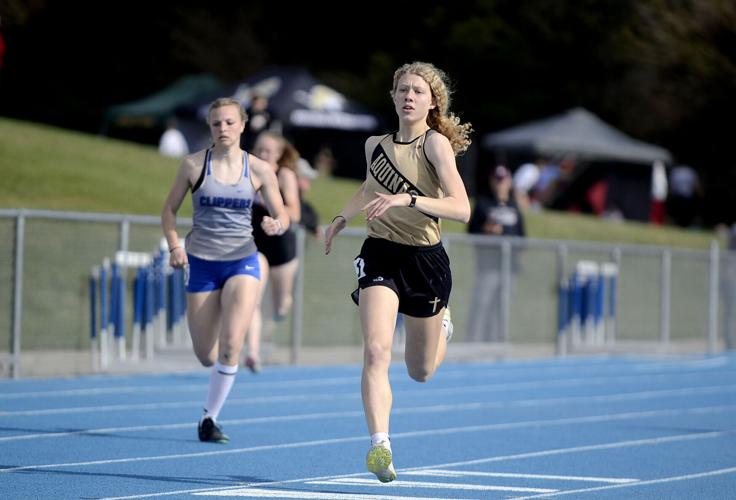 Miriam Frasher leads the field down the stretch in the 400 last week at Lakeview. Frasher was the runner-up in the event and also took silver in the 300 hurdles. 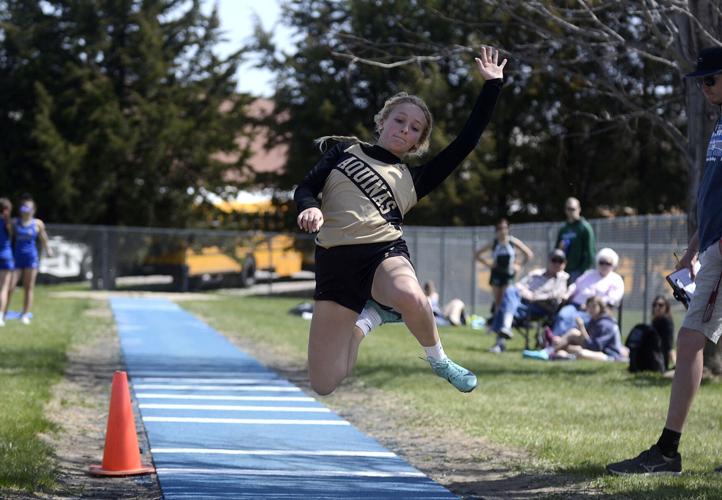 Aquinas Catholic's Gretchen Kozisek takes off from the line during the long jump last week at Lakeview. 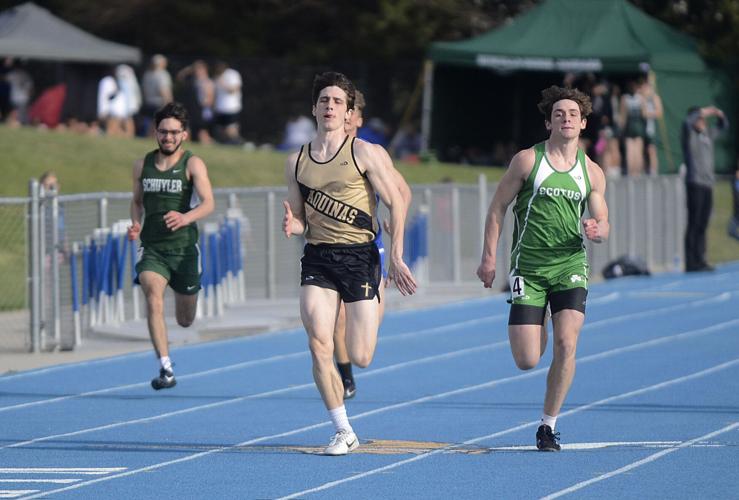 Aquinas sprinter Bryant Stouffer leads the field down the stretch in the prelims of the 200-meter dash last week at Lakeview. Stouffer was the runner-up in the 100 and third in the 200. 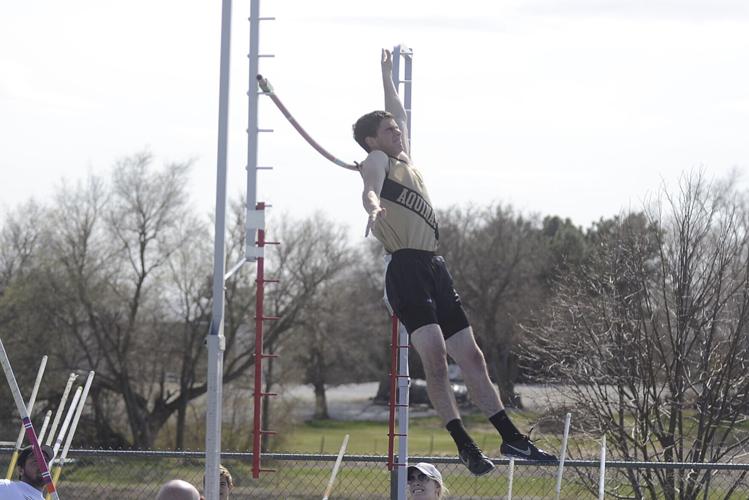 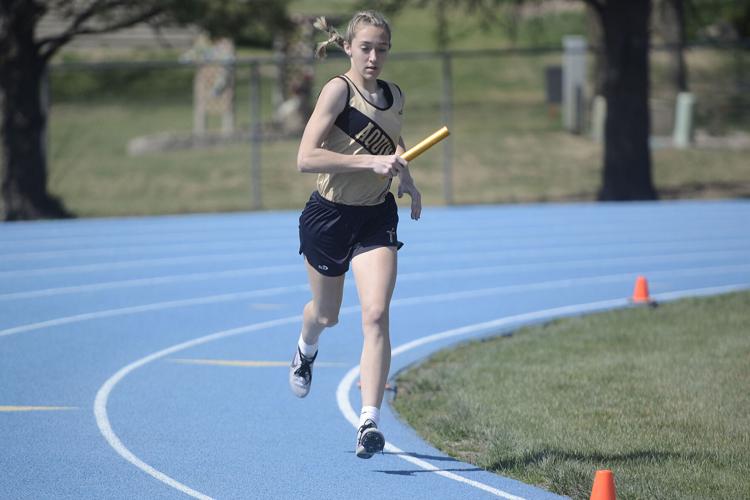 Monarch distance runner Bianca Romshek makes her way around the curve during the 3200 relay. The Monarchs took first in the event and Romshek was fifth place in the mile.