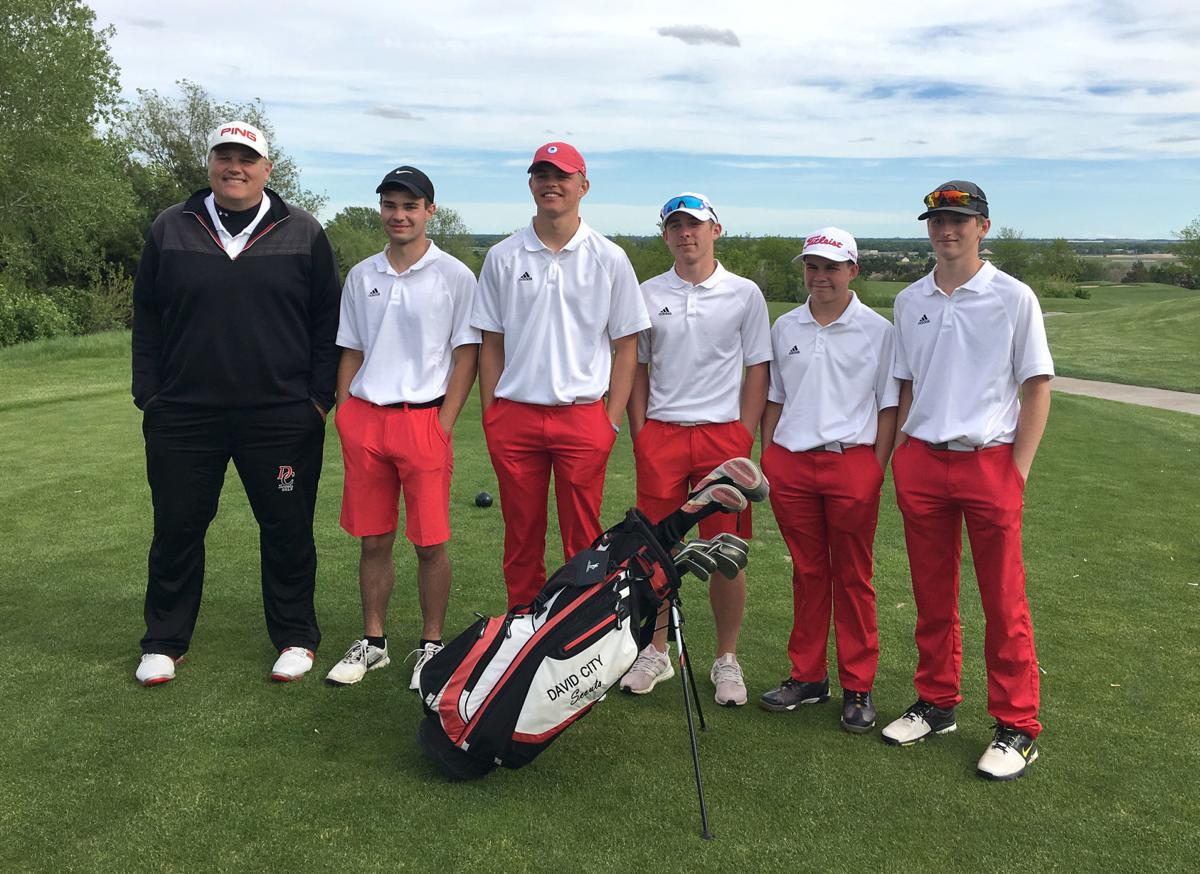 David City golf coach Tom Van Winkle, left, and team members Wiley Hein, Will Danielson, Jordan Kracl, Keyan Helgoth and Ethan Zegers pose for a photo after wrapping up the state tournament last year in Kearney. Kracl, Helgoth and Zegers, along with the rest of David City golf team, will be competing in a tournament at Oakland this summer. 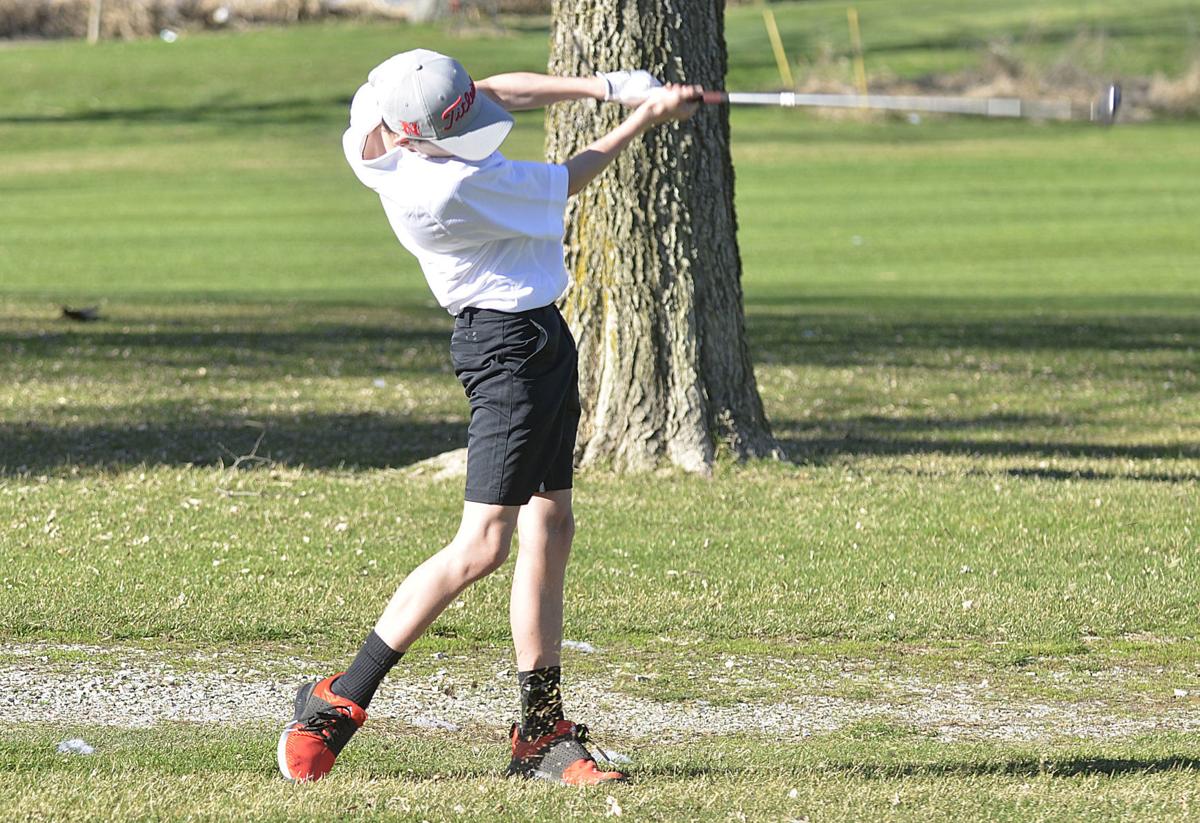 David City senior Jordan Kracl follows through on a swing last year. Kracl will be competing along with the rest of David City at a tournament in Oakland this summer.

While the spring sports season may have been canceled, golfers from David City and Aquinas Catholic will have an opportunity to play one golf tournament together.

Oakland-Craig Athletic Director Dallas Sweet, head boys golf coach Karl Lundquist and some of the parents decided to take matters into their own hands.

The Knights have historically been a golf powerhouse, winning 14 state championships, including 11 in a row. While their chance at another state championship vanished with the cancellation of the spring sports season, they will get a chance to show their potential.

On June 29 and 30 Oakland Golf Club will be hosting a tournament with some of the top golfers in Class C. David City and Aquinas have both been invited to compete.

"We all just got organized and thought it would be nice to put together a tournament," Sweet said. "We were kind of sitting around talking, and I said ‘Why don’t we look at last year’s results from the state golf meet,’ and someone said, ‘Let’s invite the Class C guys.’"

Simon Schindler and Kordell Abel will round out the rest of the David City contingent.

Also invited to the tournament was Tylen and Jaylin Jakub of Aquinas. The Monarchs were supposed to have their first golf season in several decades this spring.

David City will be led by Kracl, a junior, who placed 19th at state last year.

"I thought it would be a great opportunity for us," Kracl said. "Our season got canceled, so we all were kind of bummed out. Having this tournament just gives us some confidence that we still have a good chance to show what we have this year."

Kracl will be looking for individual success, but David City also hopes for team success at the event.

"It’s a unique opportunity, so I want to take full advantage of that. You have to take it seriously, as a regular golf tournament. I just hope we can get it done when the time comes."

He said he believes if one of them can shoot under 100 the Scouts have a solid chance of competing at the tournament.

"It speaks a lot about our program," Van Winkle said. "It was an honor to be asked and to be considered one of the better teams in the state. I was proud. I was happy to be recognized that way. It was awesome to see other coaches are recognizing our program is successful and would have a heck of a chance to be successful this year."

Junior Tylen Jakub was excited to be part of the first Monarch golf team since 1978.

Neither of the Jakubs are strangers to competitive golf, having both competed in tournaments during the summer.

While Tyler is disappointed that he wasn't able to get a full spring season, he said that this tournament does help with some of the disappointment.

"I was very thankful to get invited," he said. "I originally heard about it from some of the players on the David City golf team. It was actually through their coach I got in. I was very thankful for what they did for us. I’m just happy for the opportunity."

Jaylin was a freshman and will get his first look at the level of competition he'll see for the next three seasons.

"We’re just trying to recognize those kids and give them a chance to compete against each other and see what happens," Sweet said, "It will be a fun event."

Peter Huguenin is a sports reporter with The Banner-Press. Reach him via email at DVDsports@lee.net

For some, it was the last hurrah. For others, it was an introduction. But all involved from Scotus Central Catholic agreed that the Class C bo…

David City golf coach Tom Van Winkle, left, and team members Wiley Hein, Will Danielson, Jordan Kracl, Keyan Helgoth and Ethan Zegers pose for a photo after wrapping up the state tournament last year in Kearney. Kracl, Helgoth and Zegers, along with the rest of David City golf team, will be competing in a tournament at Oakland this summer.

David City senior Jordan Kracl follows through on a swing last year. Kracl will be competing along with the rest of David City at a tournament in Oakland this summer.