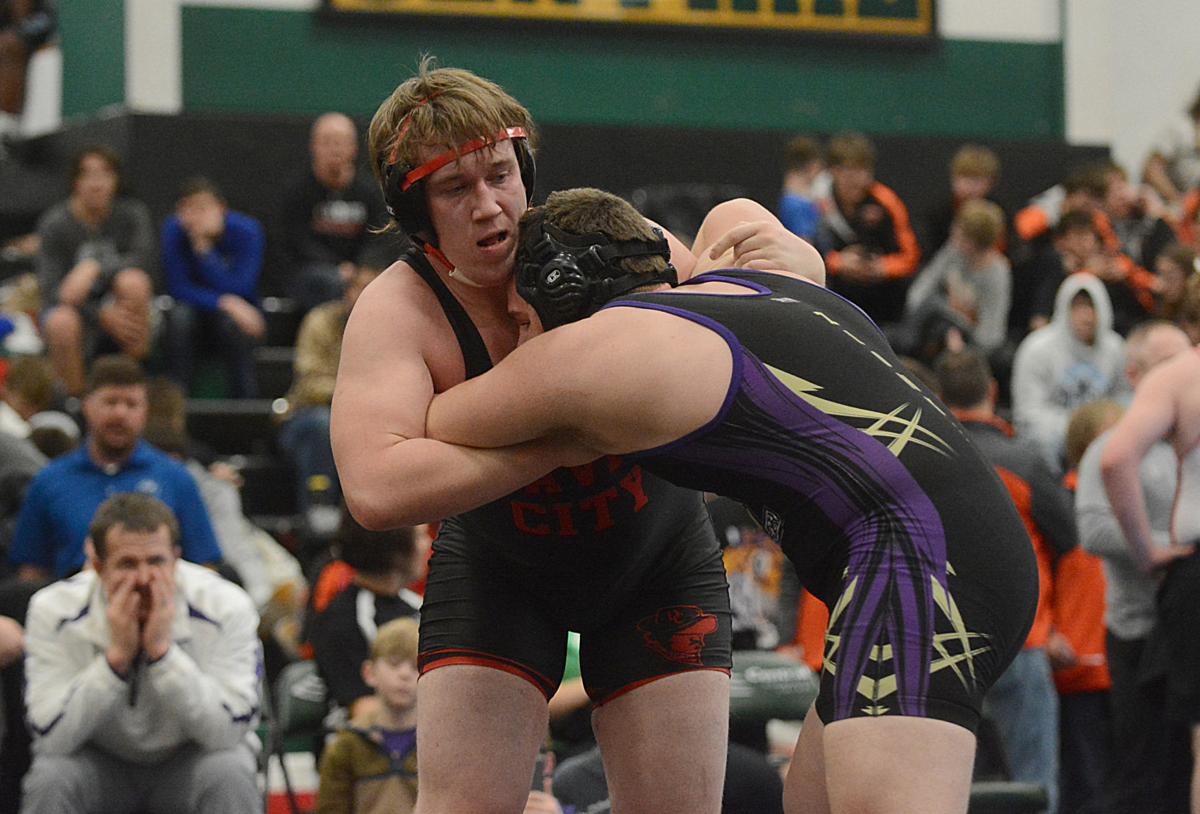 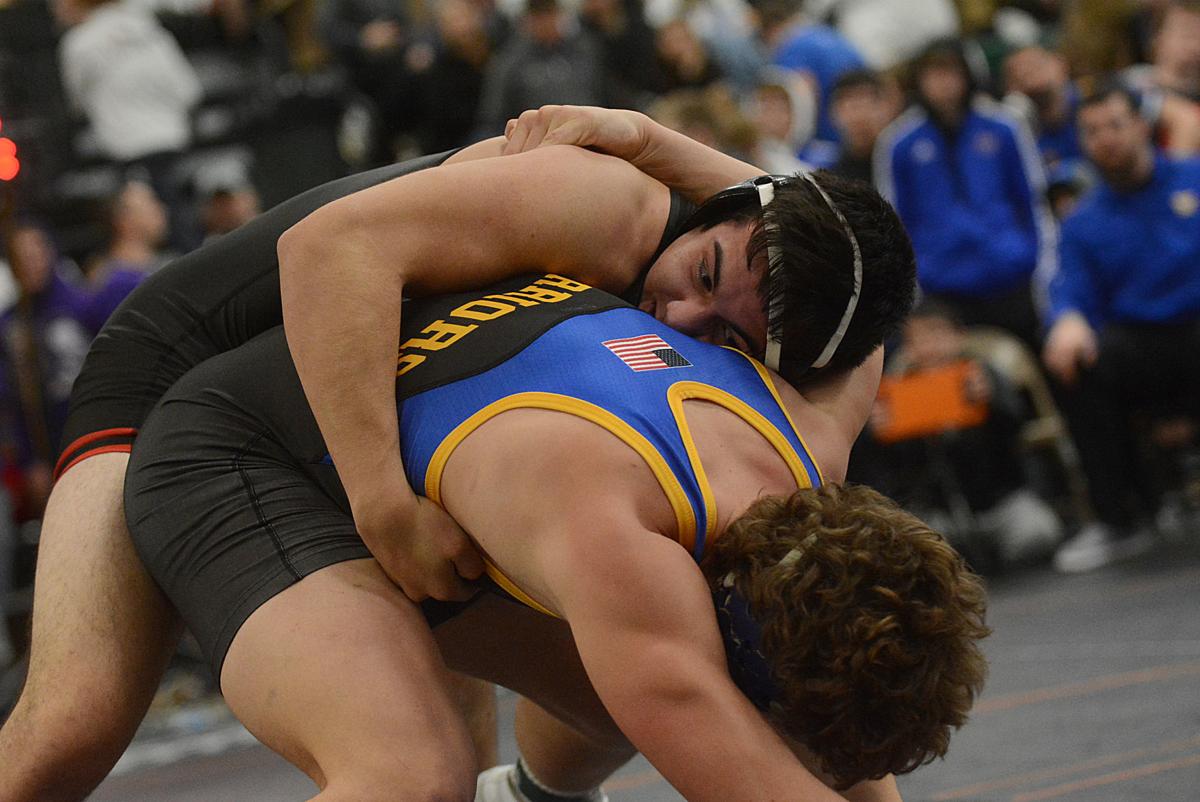 David City junior James Escamillia tries to take Kole Bordovsky of Wahoo down to the mat on Saturday. 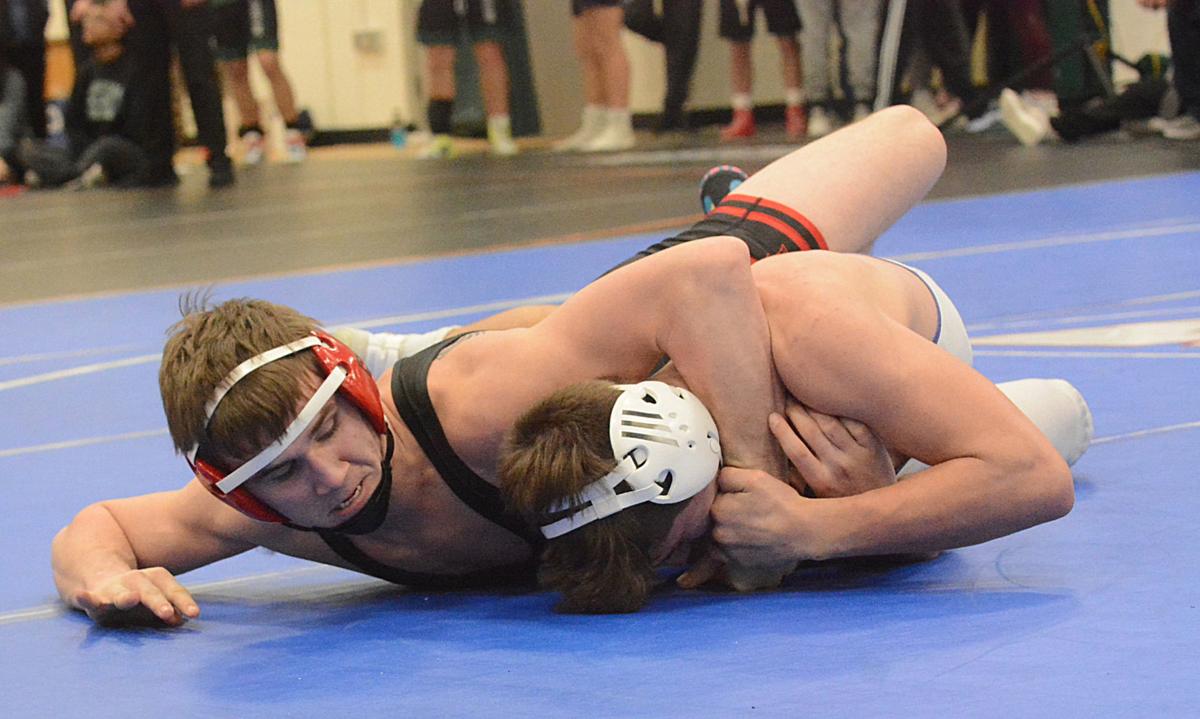 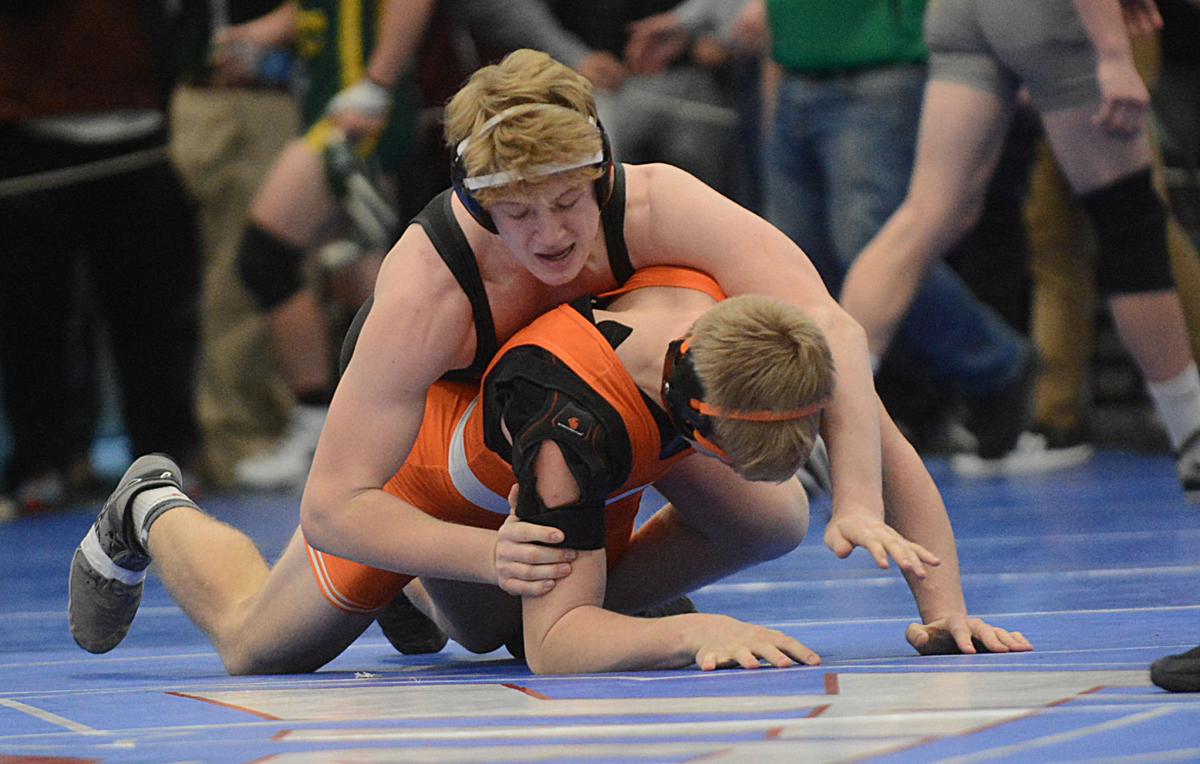 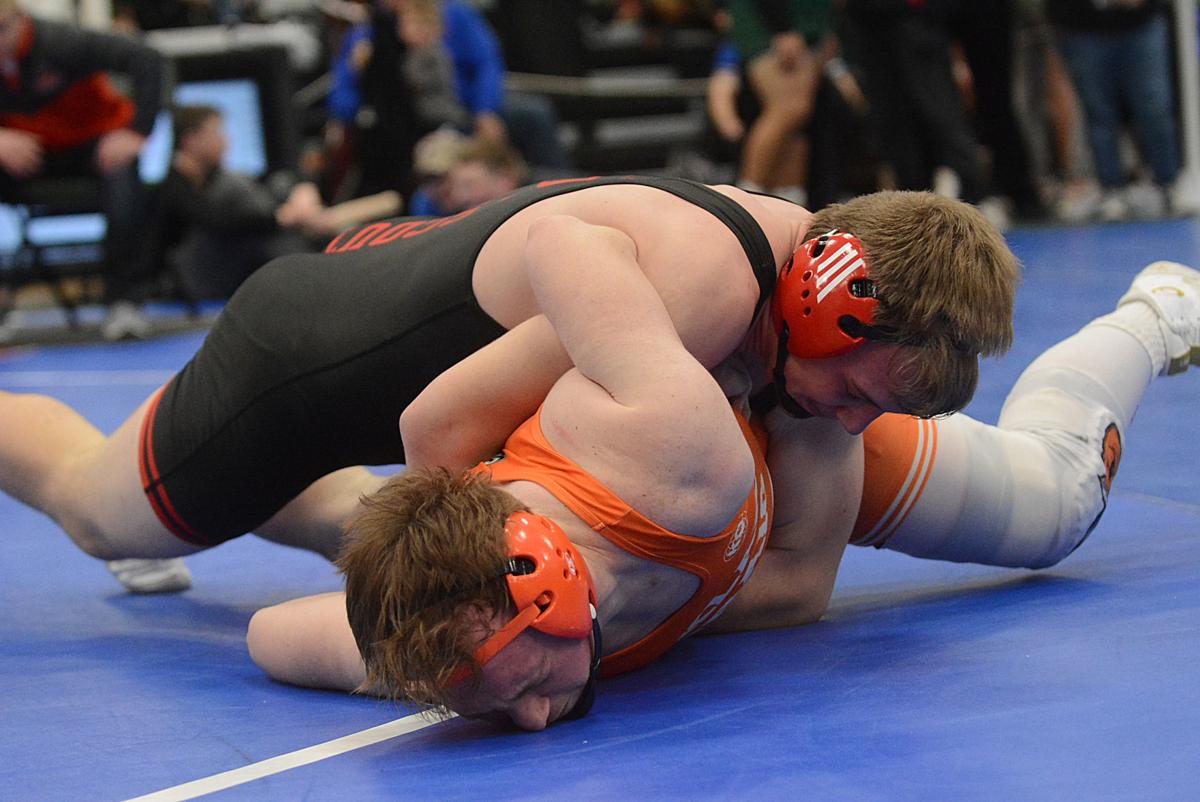 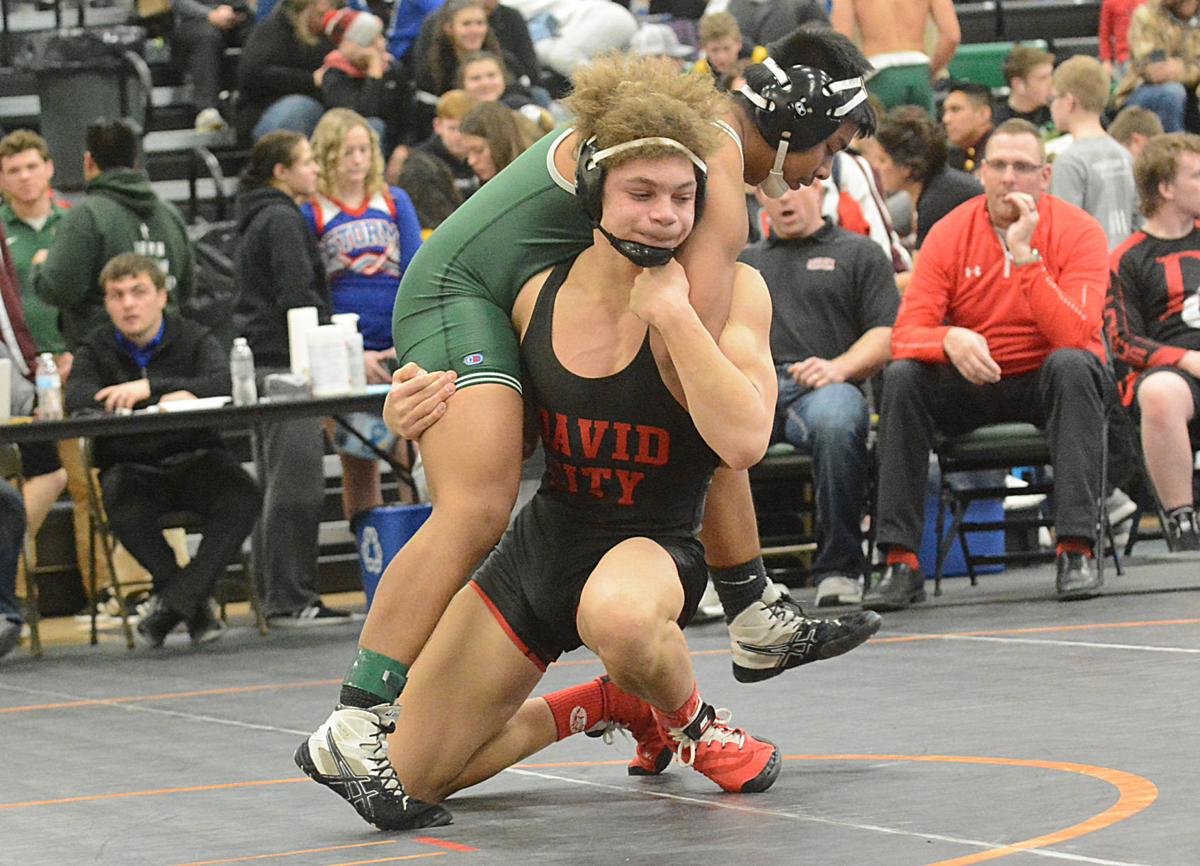 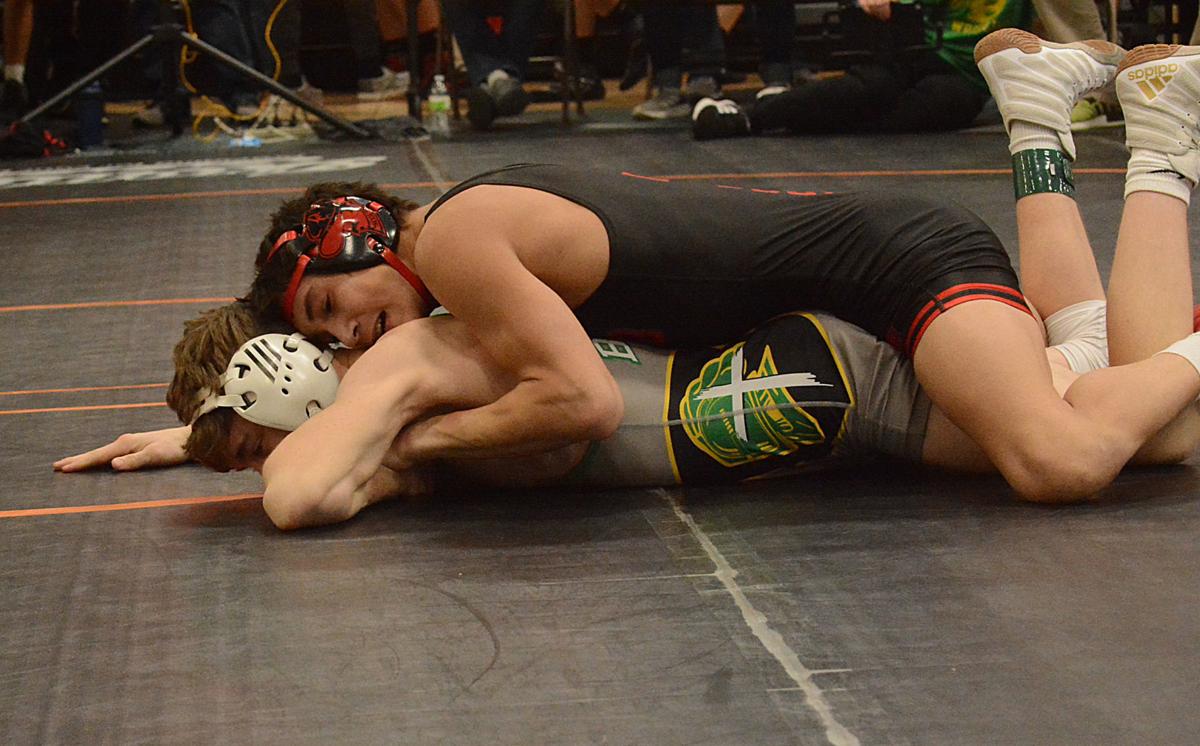 David City junior James Escamillia tries to take Kole Bordovsky of Wahoo down to the mat on Saturday.

Saturday did not go as planned for the David City wrestling team. With hopes for multiple gold medals, all of the Scouts watched the finals of the Norm Manstedt Invitational at Central Community College-Columbus from the stands as spectators.

It wasn't all bad news. The Scouts finished in fifth place as a team and had eight medalists. And while that was among a field including programs from every level of Nebraska High School wrestling, it was still somewhat bittersweet.

The only teams David City finished behind were Class No. 2 Lincoln East, which won the tournament, Class A No. 3 Columbus, Class C No. 1 Valentine and Class B Adams Central.

"Tough tournament like this you just hope you get a couple guys into the finals," head coach Thaner Thiem said. "In this tournament, where you see some of the toughest of Class A, B, C and D, the matches you don't want to lose are the Class C matches. We dropped a few of those matches today."

While the tournament was a gut check for David City, the Scouts know there's still time to improve before the postseason starts in February.

"Luckily it's only January," Thiem said. "We have another month to get ready for February when it really matters. We exposed a lot of weaknesses this weekend. That's why we have a schedule like we do. We could choose to go to an easy tournament and have all our guys really shine. We've chosen to come to tournaments like this to expose weaknesses and expose the holes in our game and get them fixed.

"Is it a disappointment? Yeah, it was a disappointing weekend for us. I think it sets you up for some better practices. Guys don't slack in practice. They're more hungry because they get tired of getting beat."

Valentine went 4-0 on Friday during pool matches with all four matches ending by pinfall. He defeated Class D No. 7 Roy Guzman of Palmer in the quarterfinals but lost in the semifinals to Class A No. 2 Breckin Sperling of Lincoln East by pin. He rebounded in the third-place match to defeat Korbyn Battershaw of Battle Creek.

"It didn't go exactly as I planned," he said. "I fought all the way back after I was pinned in the semifinals. I placed the best I could after that loss."

Vodicka also went 4-0 on Friday, pinning three of his opponents. He started out Saturday by defeated Class D No. 1 Dylan Soule of High Plains but lost to Class A No. 1 Grant Lyma of Lincoln East in the semis. He finished the day by defeating Tom Maline of Oakland-Craig in the third-place match.

"Coming in, I thought I could win it," he said. "It went pretty well. I won some good matches against some good kids. I lost the one pretty bad, but it just shows I have to keep working."

Spencer Allen went 3-2 on Friday and 1-2 on Saturday. Two of his losses came against Class A No. 2 Anthony DeAnda of Columbus. Allen did get a victory over Class B No. 4 Travis Marxsen of Schuyler on Friday.

Escamillia went 4-1 on Friday with his only loss coming to Class A No. 1 Kasten Grape of Columbus. He went 1-2 on Saturday with losses to Class A No. 2 Tony Pray of Creighton and Class B No. 2 Kole Bordovsky of Wahoo.

Moore went 2-0 on Friday before going 1-2 on Saturday.

David City is in action next at 6:30 p.m. on Thursday at the Butler County Triangular at Aquinas featuring David City, Aquinas and East Butler.

We can deliver obituaries to your email. Sign up here.

Want a summary of today's news? Sign up for daily headlines.