David City entered the 2021 volleyball season in a state of transition. The year prior, the Scouts put together a 21-9 record led by three key seniors in Lauren Vandenberg, Maya Couch and Payton Andel.

Twenty-one wins was more than the program had achieved in at least 17 years. But keeping the momentum going looked to be a challenge. A handful of veterans remained, but much of the lineup would be filled by either youngsters or players new to varsity.

That group put together a 15-14 season, and by all accounts, reached its potential. Back-to-back winning seasons is also the first time that's been achieved in 20 years or more.

"After losing the seniors we did, I knew coming in and with a lot of younger girls that we would struggle a bit," coach Tali Reeves said. "But honestly, our winning record and some of the teams that we played with and even beat, I thought we did way better than expected."

The preseason goal for David City was to finish with a winning record. Granted, Reeves realizes that was only achieved by the slimmest of margins, but it was a major accomplishment nonetheless.

Several factors were working against the Scouts when the season started.

Firstly, Neely Berhns was the only true attacker with any experience. As talented as she is, teams with one go-to weapon become rather predictable.

At setter, the Scouts had to find a new option following 688 assists that went with Andel when she graduated. Behrns was the leader in the back row as a junior, but behind her, second, third and fourth in digs were Blum, Vandenberg and Andel.

Could the newcomers do it and do it as well. Initially, it took some time to answer that question. David City dropped eight of its first 12 matches.

A three-match winning streak followed and sparked a finish that saw the Scouts go 11-6. They split four matches in the Southern Nebraska Conference Tournament to end the regular season then faced Scotus again in the first round of the subdistrict tournament.

David City had come quite a long ways, but beating a team that had just played seven straight ranked opponents was a tall task. The Scouts lost in three. Still, David City showed fight in responding to a big loss in the first set and had a late lead in the second.

"I know it was only by one game, but that was huge for this team, especially with having such younger girls on the court," Reeves said. "There was a couple games in there that we probably should've won, but in the end, I thought our team did a really good job this year."

David City faced three teams that qualified for state. Its best win was on Oct. 7 in the second match of a triangular. The Scouts downed Class C-2 state runner-up Sutton in straight sets.

Berhns proved to be the stalwart the team expected, Avery Couch developed into a solid second option, Emily Johnson took over at setter and passed Andel's total from the year before and Lili Eickmeier found her way as the libero.

Behrns broke the school record with 376 kills and capped her varsity career with 798 kills, 670 digs, 99 aces and 64 blocks. Couch totaled 283 kills, more than doubling her total from last year and doubling her average per set.

"Neely did a tremendous job for us this season. It was such an accomplishment for her to break the season kills record, but no surprise if you ever got to watch her play this season," Reeves said. "She was an amazing four-year starter for us, and her leadership and competitiveness is going to be missed greatly by our program."

Johnson, who switched positions finished with 705 assists, 17 more than Andel had the year prior.

"Last year being a right side hitter, she (Johnson) stepped up in a huge way. She was a really smart hitter for us," Reeves said. "She mixed it up when she needed to and gave it to the hot hand when we needed it to. Her defense really picked up this year."

Perhaps the most important of all was the emergence of Eickmeier. Unsure of how potent or consistent the offense could become, keeping the ball up and playing defense was a must. Eickmeier stepped in and led the Scouts with 274 digs.

"At the beginning, we weren't as scrappy, but we got more scrappy as the season went on and made teams work for their points," Reeves said. "Leading the way was Lili Eickmeier. She laid it all out and gave some huge digs for us."

Freshman Hailey Glodowski tallied 42 kills. Another freshman, Addison Kuhlman, served the third-most aces with 34 to go with 137 digs. Contributing early on is their careers is a good sign for both and the program as well.

"Honestly, they (Glodowski and Kuhlman) gained confidence throughout the season," Reeves said. "I thought Jaiden Ray was another freshman who ended up coming in and playing back row and doing a phenomenal job for us."

The Scouts featured four seniors in Eickmeier, Behrns, Johnson and Kaidence Morlan. Each had a different purpose and a different impact, but all were in it together.

"Some of them didn't have as big a role, but there was leadership and each one brought something different to the table. We're going to miss each one of them," Reeves said. "Neely being the all-in athlete... the definition of a competitor. Just having them at practice and their leadership. They all lead by example, and we're definitely going to miss that."

The Scouts will return six players from the varsity squad. While some regulars return, the lineup will again be incorporating new members.

"We don't have too many juniors coming up that have varsity experience and so we're definitely going to be a young team again, even younger," Reeves said. "We'll see what the summer brings. I hope they learn from these seniors this year to be competitive."

Sam Ficarro is a sports reporter for The Banner-Press. Reach him via email at DVDsports@lee.net.

For the second time this season, Aquinas Catholic went on the road to face Fremont Bergan. This time the two sides met for a spot in the NSAA … 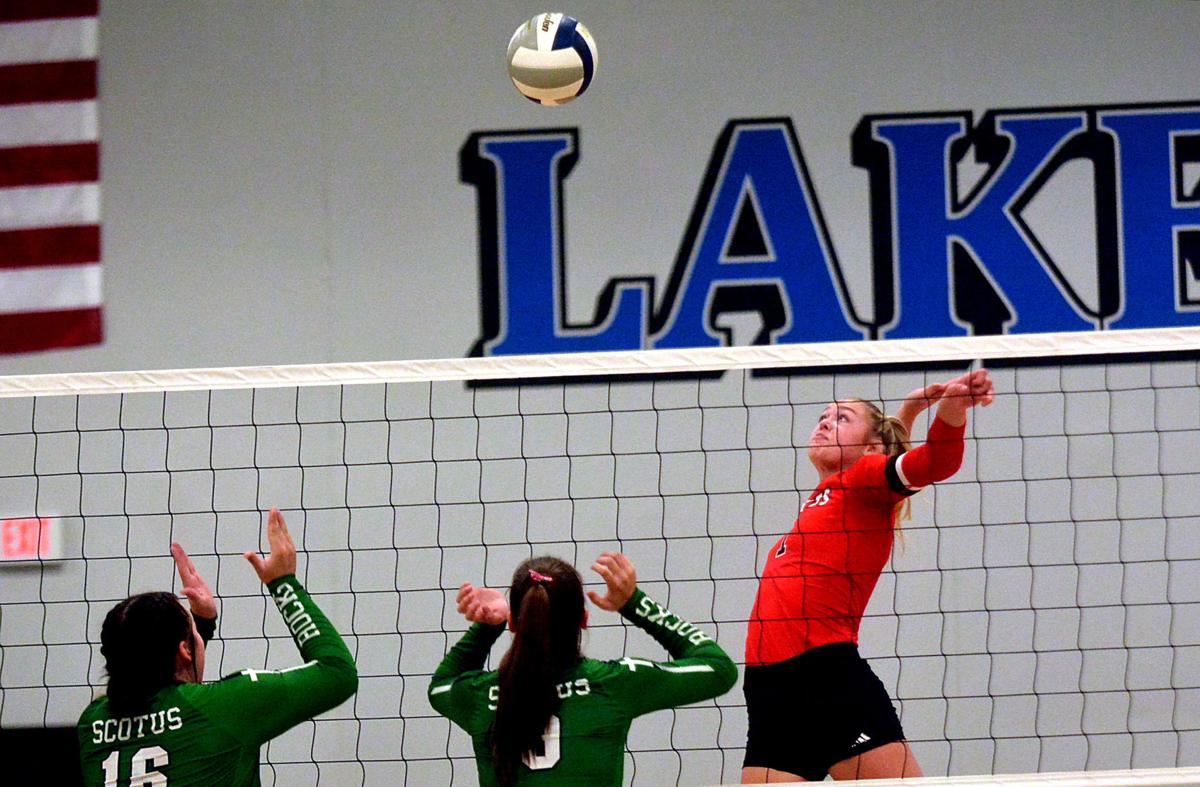 David City junior Avery Couch winds up for a swing in the subdistrict match Oct. 25 against Scotus. Couch was David City's No. 2 option in the attack with 283 kills. 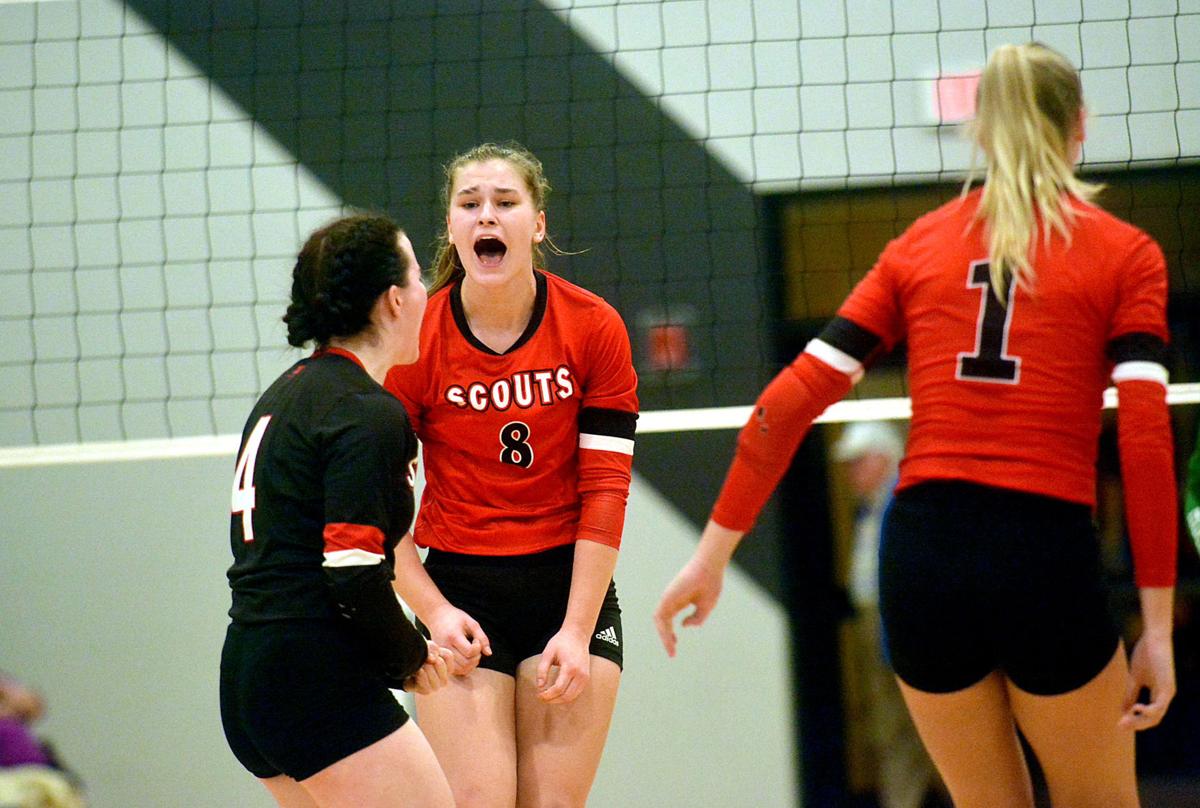 Scout senior Neely Behrns hollers to Lili Eickmeier after winning a point in the Oct. 25 subdistrict match in Columbus. The Scouts went 15-14. 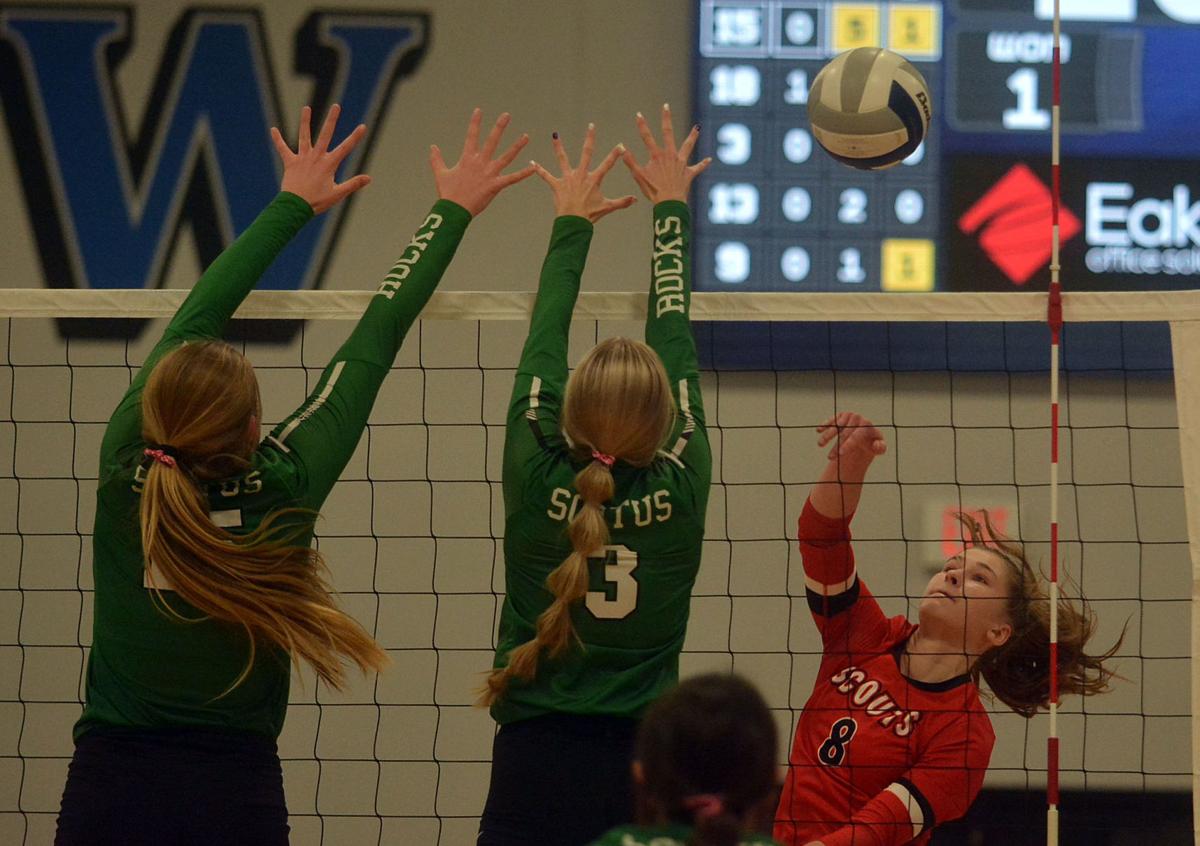