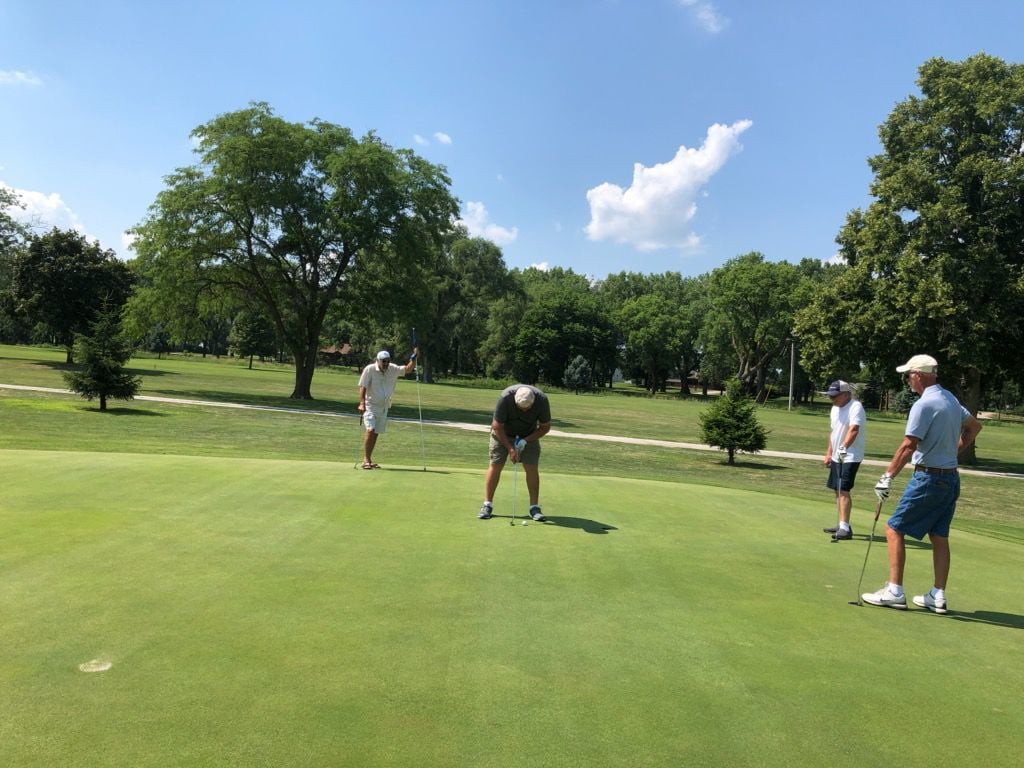 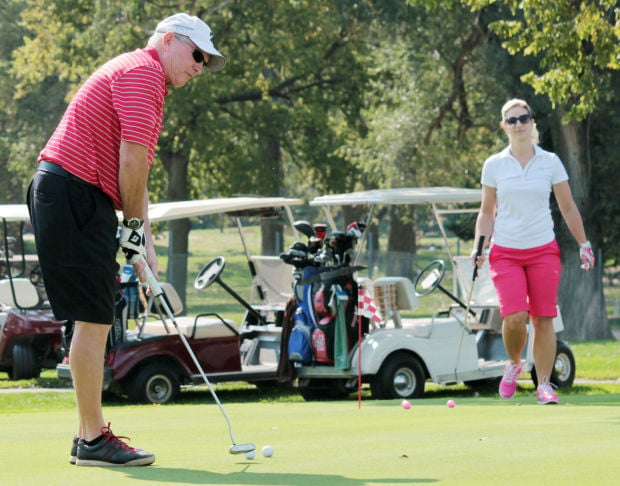 Steve Bailey, left, practices his putting at a Fall Frenzy event. The Schuyler Golf Club has a boom in membership amid the COVID-19 pandemic. 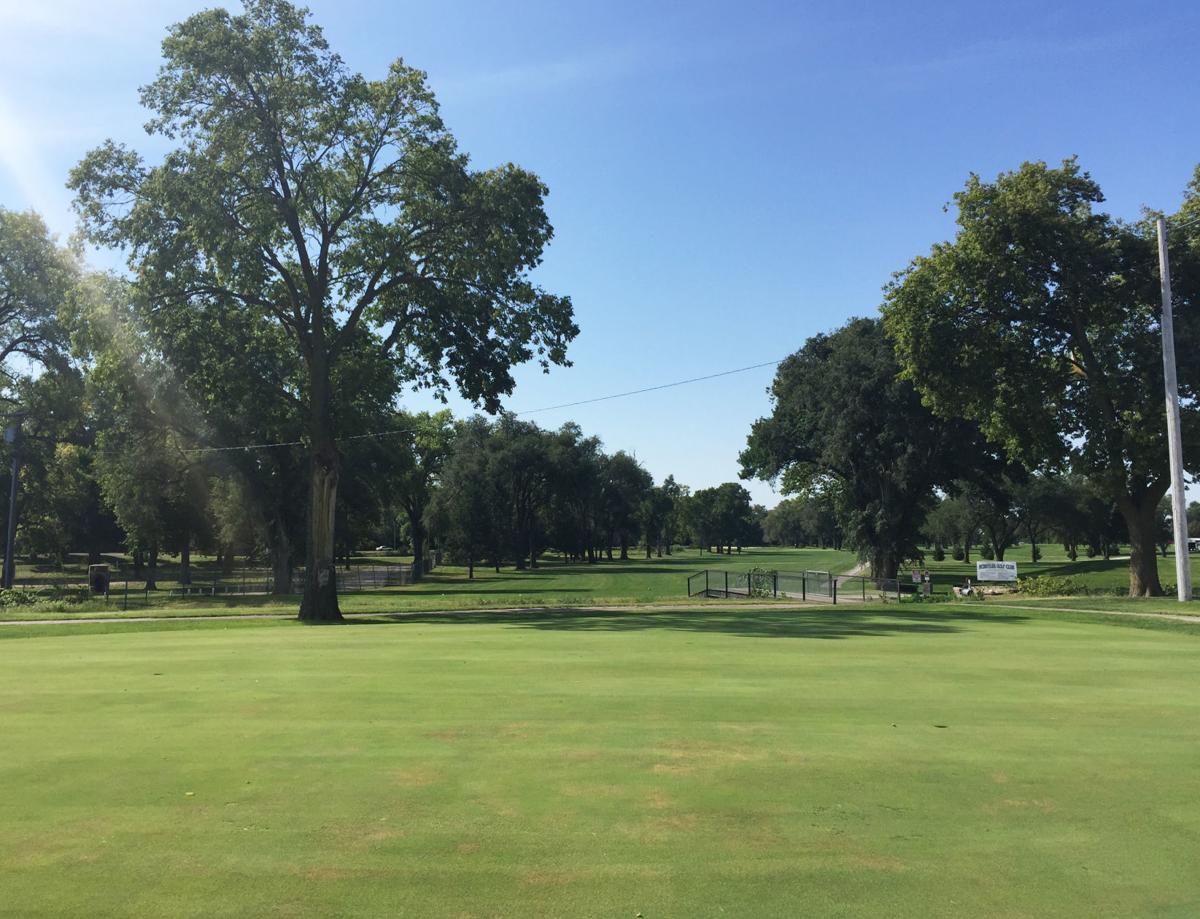 A glimpse at a portion of the Schuyler Golf Club.

Every year, a family from Colorado makes the trek to Schuyler, Nebraska to visit relatives and participate in the Schuyler Golf Club’s annual Firecracker Open 4th of July weekend, said manager Luann Vavricek. But this year they didn't come.

Vavricek said she’s sure it’s because of traveling and the virus and she can see where they want to be safe. But, despite COVID’s impact on the economy, the club has added twice the number of members this year as normal and with a string of events and tournaments lined up, they’re looking forward to a sense of normalcy.

“Each week I’ve noticed we are getting busier and busier, kind of getting back to as normal as anybody can be,” Vavricek said. “We just knew we had to go with something. There was so many things at the beginning canceled -- graduation parties, class reunions. Some are still hesitant. But at least we know we are able to offer the facility.”

It’s people’s choice if they want to come, she said.

Earlier this year, the coronavirus outbreak in Schuyler prompted a temporary closing of the bar area and grill.

“It really was a struggle in March and April partly because we did not know for sure,” she said. “When it really broke out bad in the middle of April here in Schuyler, we offered then only takeout. People have been very obliging with that. We still do quite a few takeouts. We do what people feel comfortable with.”

The community has been very supportive, she said, something Schuyler Area Chamber of Commerce Director Audra Jedlicka agrees is something positive to come out of the current pandemic.

Jedlicka said she is excited to work with Vavriceck and the Schuyler community and agrees it’s nice to feel a sense of normalcy.

“Isn’t that the truth? I think we’re all feeling that. It is also hard to schedule events not knowing. We have to start planning and hope that we can stay normal. It would be nice,” Jedlicka said. “I just hope the numbers are really low.”

It’s not just the golf course they plan to get busy. They are working with other venues like the library event center. Schuyler has a lot of great event spaces for a small town, she said, and the golf club is an integral part of the community.

“They offer food, it is a community place to gather, so a lot of people will have their events there. The golfing is an entertainment aspect as well,” Jedlicka said. “They’re just a very important part of community. I am super excited to start working with them to promote some fun and entertainment.”

For Vavricek, the golf course offers a place for people to come for an hour and get away from all the worries COVID-19 brings.

“We’re not taking away the pandemic or the economy, but it’s giving them a chance to have some relaxing times,” she said.

After the July 4 Firecracker Open there will be a women’s powderpuff with two-person teams on July 11, a one-person scramble Aug. 9, and a rookie scramble on Aug. 15. The rookie scramble is a new thing, she said, since with all the new members and new golfers, some are hesitant to be on league.

“Golfing is about the one activity you can do, you know a lot of ball games and things got delayed,” she said.

Vavricek said with golfing they make sure groups are distanced anyways so you don’t hit each other with the balls and they are still careful they sanitize the carts and there are extra steps with their cleaning.

Students make masks for those in need

After teacher Jared Severson posted a photo online of the face masks his Warrior Academy students had made, Colfax County Deputy Emergency Man…

The City of Schuyler’s main losses so far this year were in Keno funds and sales taxes, said City Clerk and Treasurer Lora Johnson. The City's…

Clarkson/Leigh makes most of shortened summer

The champagne flowed at the Schuyler Golf Club last Thursday to christen a newly-renovated bridge, a project undertaken after flooding last Ma…

Luis Salinas’ family has owned Burrito House for almost two decades. They opened two weeks before 9/11 and now are weathering the COVID-19 pandemic.

Schuyler grads get their day

For Nicole Taylor, music teacher at Schuyler Elementary School, the students who graduated from Schuyler Central High School on Saturday have …

Steve Bailey, left, practices his putting at a Fall Frenzy event. The Schuyler Golf Club has a boom in membership amid the COVID-19 pandemic.

A glimpse at a portion of the Schuyler Golf Club.