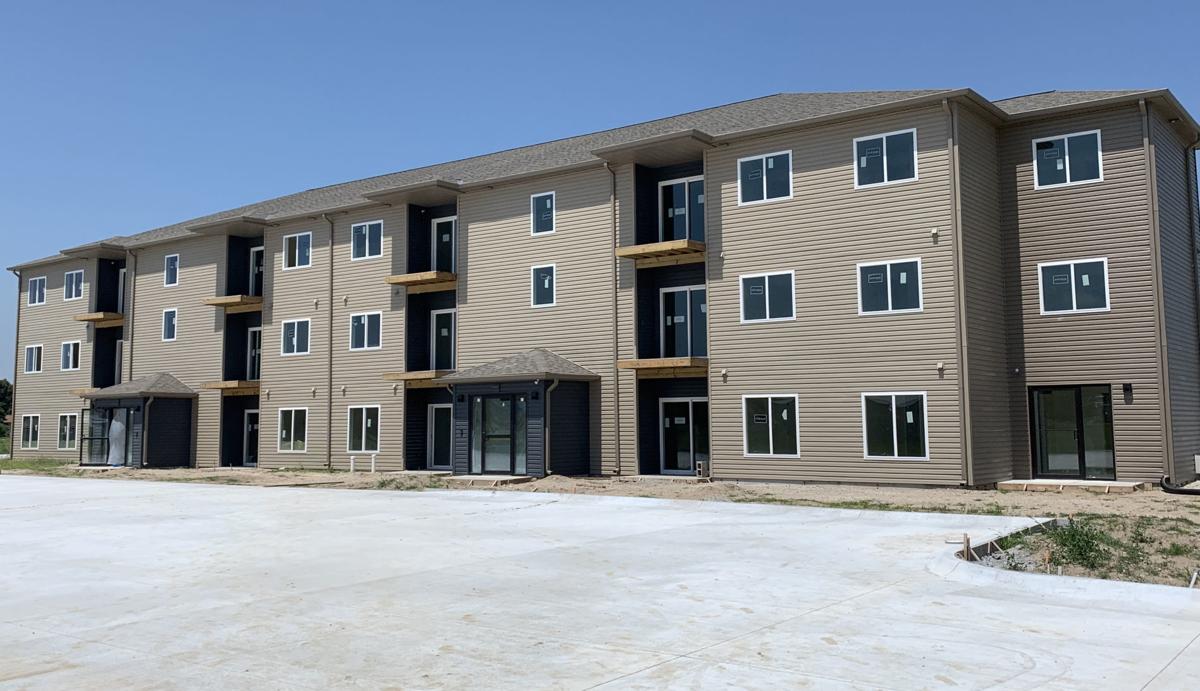 The exterior of Eastview Apartments progresses nicely through construction. The apartments, the first of its kind to open in Schuyler in more than 20 years, should be completed in October. 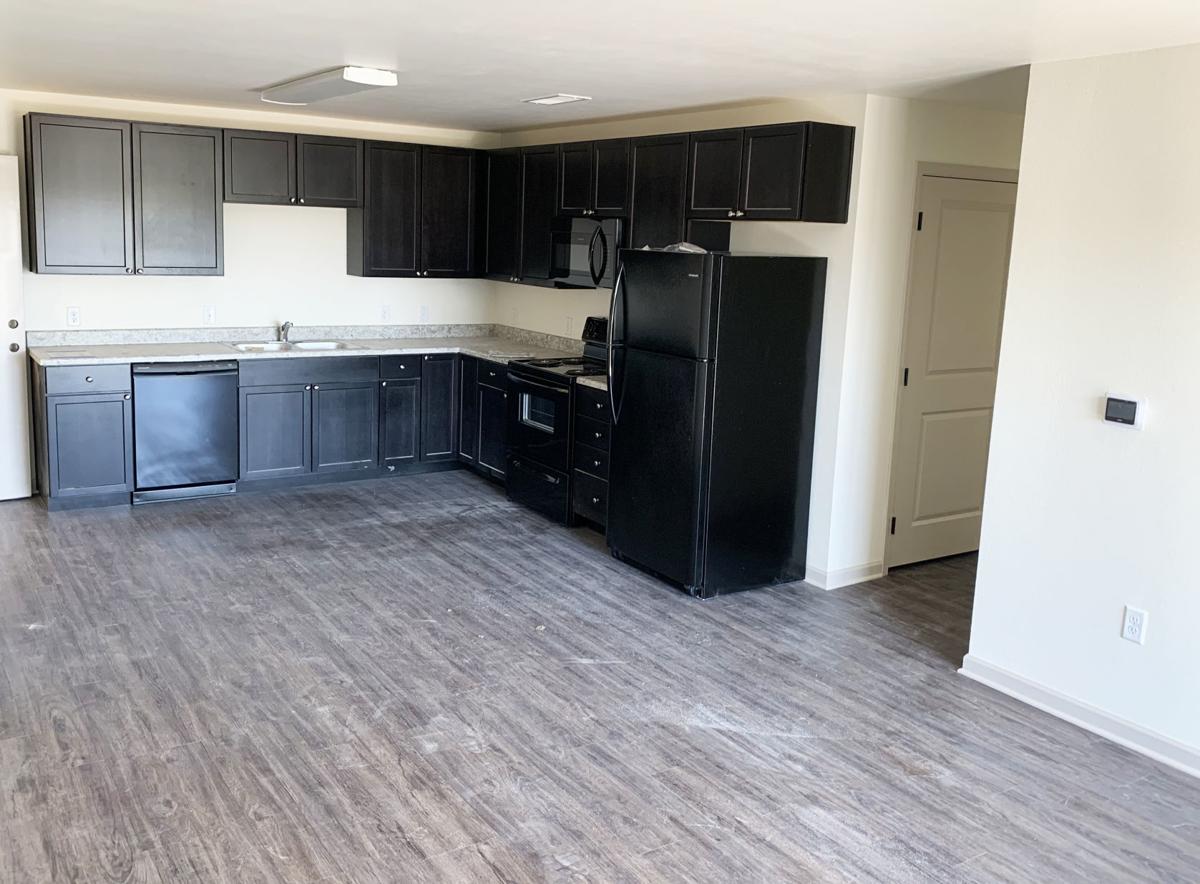 A view of a kitchen area in one of the new Eastview Apartments in Schuyler. The building is slated to open around the beginning of October. 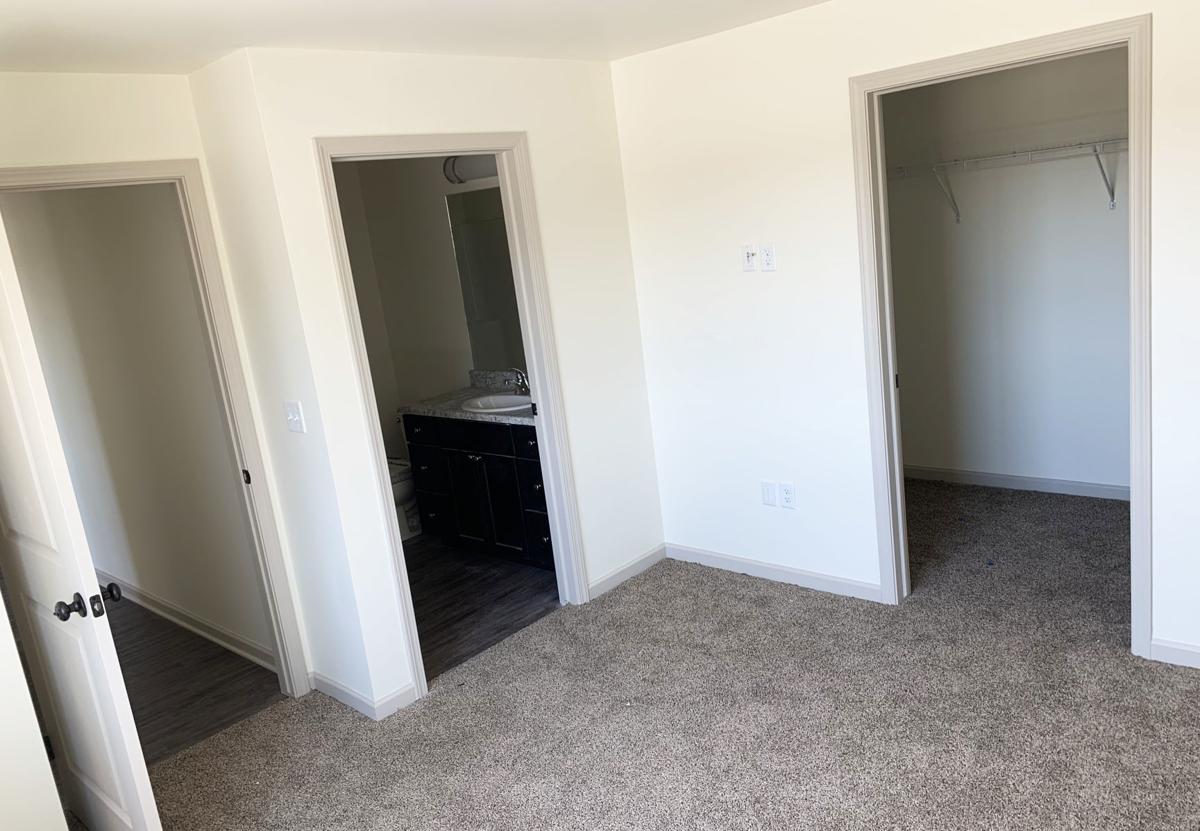 A view of one of the bedrooms and bathrooms in an apartment at Eastview Apartments in Schuyler. The new complex is slated to open around the beginning of October.

For the first time in more than 20 years, a new apartment development is opening in Schuyler.

The finishing touches are now being placed upon Eastview Apartments, 1921 H St., which are scheduled to open during the first weeks of October. Work has been happening at the facility for some time and overall, it has been a productive undertaking.

“They broke ground nearly a year ago,” said Brian Bywater, community housing specialist for Schuyler Community Development. “(They) worked all through the winter when it was freezing cold, all through the wet spring and summer and we’re almost to the point of completion.”

Bywater helped secure funding for the project. Although it is a private venture, the project received funding from Schuyler Community Development through grant money it received from the Rural Workforce Housing Fund. The new complex fills a need for affordable workforce housing that has been long overdue in Schuyler.

“The last apartment development was built in the late '90s,” Bywater said. “Those had income guidelines attached to them, where this apartment complex is pretty well market-rate. People don’t need to worry about how much they make.”

Bywater noted that the apartments will be a good way to help bring workers to Schuyler and integrate them into the community.

“It’s a great employee expansion/retention option for the local employers to have in Schuyler to keep their employees living in Schuyler and to attract new ones,” Bywater said.

Property Manager Bryce Meyer said that people who are not ready to own a full home will find a perfect spot in Eastview.

“Leasing an apartment is a whole different ballgame,” Meyer said. “Those people who don’t want to make the jump into owning their own home, they want something new rather than a dilapidated old house (or) maybe they don’t want to be in a different crowd on a different piece of property. This is more family-oriented, younger-adult living in this type of project.”

Meyer is fast at work attempting to fill the building with tenants. There are plans for additional buildings beyond the first apartment, but at the moment, Meyer’s focus is getting his first building filled.

“In a perfect world, we get this building filled and keep it filled,” Meyer said. “Our big thing is to get it filled as fast as possible.”

The initial opening date has been set for Oct. 1, however, that is more of a soft date than anything else. Meyer said that the third floor is rent-ready, with the other two floors still finishing up. Things are going well for the complex and if needed, they could open on the first of the month.

“I think tenants could start moving in (on the 1st),” Meyer said. “The interior corridors would likely be the last thing to get a little bit of work done to them, with whatever flooring and that type of stuff outside the units.”

Still, these are exciting times with Schuyler having a brand new option for those looking for good, affordable workforce housing. Bywater is especially happy to have people come in and find a comfortable place that they can call home.

“It’s new and it’s here,” Bywater said. “It’s extremely exciting. Seeing the growth that Schuyler has had in housing, with this project as well as other projects that we’ve had in the past 3-4 years, has been a thrill for me to be involved with.

“The fact that we are able to construct these projects and get them built up or sold, whichever the case may be, is indicative that people are interested in living in Schuyler. They’re interested in working in Schuyler and we are a growing community, which can’t be said for a lot of rural communities in Nebraska. I’ve said it before that Schuyler is open for business and we’re looking forward to people moving to Schuyler and making Schuyler their home.”

Although the dynamics of Brian Bywater’s job are intricate, the overlying concept is pretty straight forward.

The exterior of Eastview Apartments progresses nicely through construction. The apartments, the first of its kind to open in Schuyler in more than 20 years, should be completed in October.

A view of a kitchen area in one of the new Eastview Apartments in Schuyler. The building is slated to open around the beginning of October.

A view of one of the bedrooms and bathrooms in an apartment at Eastview Apartments in Schuyler. The new complex is slated to open around the beginning of October.