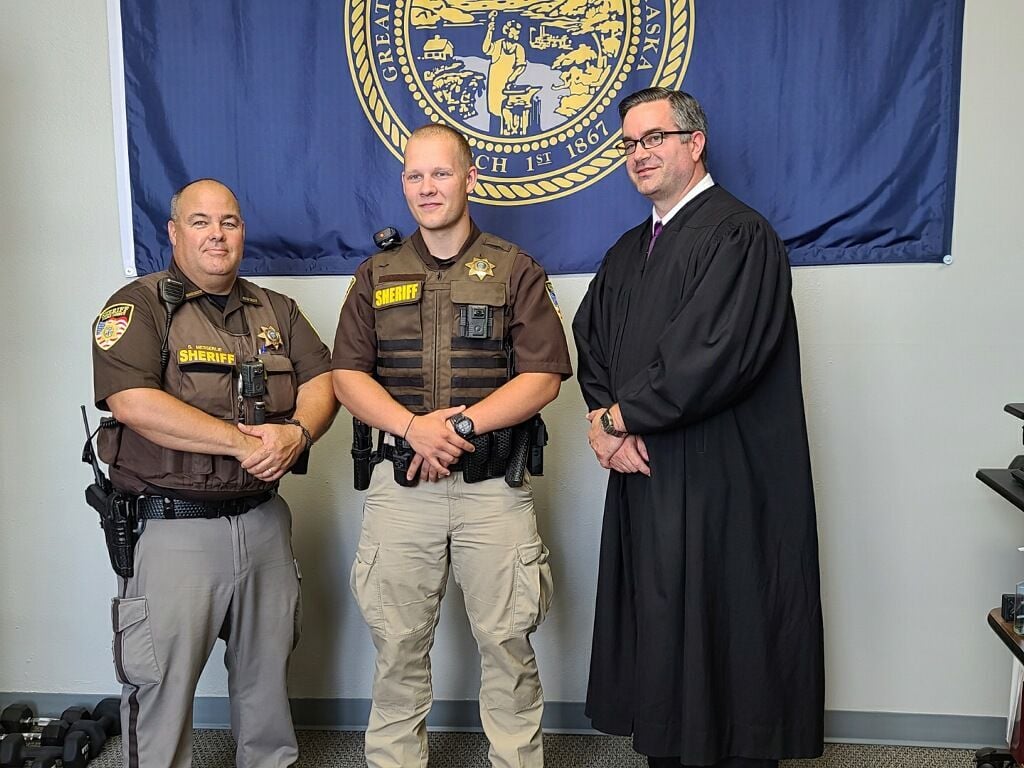 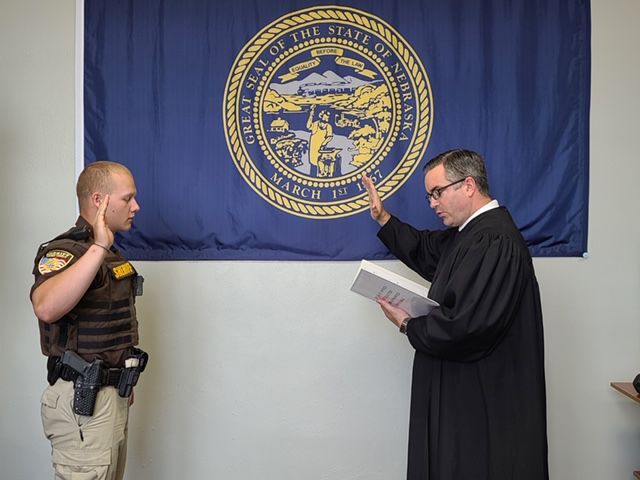 Deputy Sheriff John Dodge is sworn in by the Hon. Andrew R. Lange.

Following that period of his life, Dodge dropped out of community college, joined the U.S. Marine Corps and moved from his home state of Colorado to Nebraska with two weeks' notice, all to pursue his goal. Last week, the Colfax County Board of Commissioners approved Dodge's appointment.

“My band teacher was…a Marine Corps veteran and retired police officer, and he would always tell us his cop stories,” Dodge said. “It just kind of drew me into it and ever since then I was really looking forward to pursuing a career in law enforcement.”

Dodge enrolled for one semester at Arapahoe Community College in Littleton, Colorado, he said, before joining the Marines as an artillery cannoneer.

“I was getting good grades in college and everything, but I just hated going and sitting in a classroom (and) staring at PowerPoints all day,” Dodge said. “I felt like there was something I could be doing with my life that was more beneficial to me than just getting a piece of paper that says I took these courses.”

Other law enforcement officers he knew told him there are different paths to starting a career in law enforcement. The two main avenues he heard about were college or the military.

“I tried college and didn’t really like it,” Dodge said. “It was kind of difficult for me to stay in college, so the decision to drop out wasn’t any issue. I was just ready to do something different with my life.”

He went to the Marine Corps reserves and his unit got together once a month.

“I had to find something to pay the bills,” Dodge said.

He was working at a summer job he’d previously when a buddy told him about an opportunity in Sheridan County.

“It was pretty easy for me to just pack up all of my stuff and move to Nebraska,” Dodge said. “I just made the decision that this is the career I want to be in and, if this is my foot in the door, then I’m ready to make that change.”

Dodge has only been in Schuyler for a few weeks, but he said he likes it. His dog, Roxie, can run around and he can visit more secluded areas, but there are still people. He also already knows others in Schuyler law enforcement from the police academy.

One of the guys in the Sheriff's Office went to the academy with Dodge and had nothing but positive things to say about him, noted Sheriff Shawn Messerlie.

“I’m very impressed with him…He seems to really have his life together. He’s had a lot of good experiences serving our country,” Messerlie said. “I hope he sticks around.”

Dodge is a quick learner, Messerlie said, and is very intelligent.

“He’s out there right now learning…so he’s not going to learn everything overnight,” Messerlie said. “He’s doing rather well, and I’m excited for him to get out there and get working on the road by himself. I know he’s looking forward to it. He’s got a lot of ambition and I really like that -- I want somebody that wants to actually go out and work.”

This is a contentious time for law enforcement around the country, but Dodge said he looks at it as an opportunity to create good relations and help build a rapport with the community.

“That way they can see it as not all police officers are bad, not all sheriff’s deputies are bad, and a lot of us are really just trying to go out there and help our communities the best we can,” he said. “Community relations is always something I’ve been passionate about.”

“I don’t want to get too far ahead of myself, but eventually I’d like to see myself in more of a specialized form of law enforcement so whether that’s a K-9 handler or maybe an investigator,” Dodge said. “That’s ultimately what I want to do.”

The first thing Randy Wendt’s family is grateful for is that he didn’t have a heart attack.

Schuyler resident Kara Dinslage had a tough Christmas last year when she received an unexpected and unwanted surprise – a breast cancer diagnosis.

Lilly Suzette Nilo was the child her parents Ana and Juan had been dreaming of.

As of Monday, Oct. 19, six Colfax County residents had died of COVID-19, according to the East-Central District Health Department’s COVID-19 d…

I grew up on a farm and live today in rural Ashland, where the Raikes family has been farming for more than 100 years. Growing up I walked bea…

Steve Avery, the co-owner of the new Dairy Queen, promised at the Sept. 23 groundbreaking he and his wife will be supporters in the community.

Deputy Sheriff John Dodge is sworn in by the Hon. Andrew R. Lange.