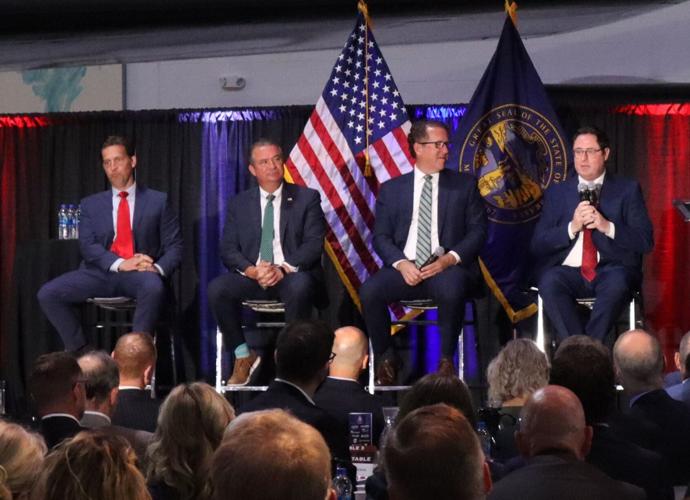 Sen. Ben Sasse, Congressman Don Bacon and Congressman Adrian Smith react as Mike Flood attempts to answer a question on a third microphone after the first two cut out while he was speaking at the Federal Legislative Summit at the Strategic Air Command (SAC) Museum on Aug. 25. 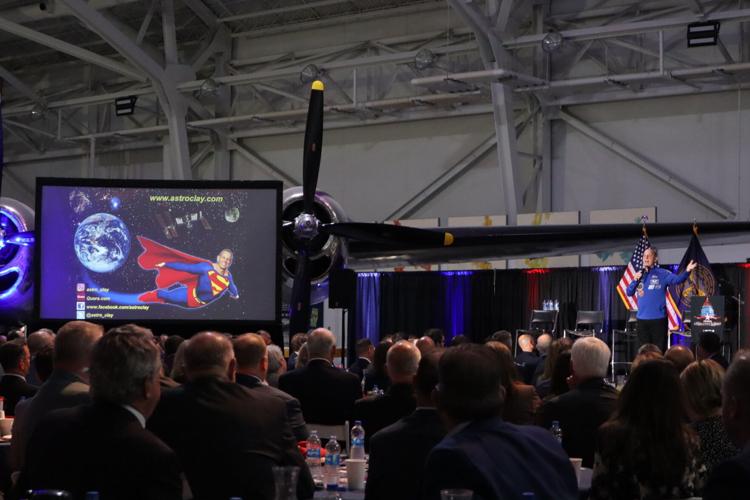 Retired NASA astronaut and Ashland native Clayton Anderson makes an expressive gesture at the end of his keynote speech at the Federal Legislative Summit at the Strategic Air Command (SAC) Museum in Ashland on Aug. 25.

Every year, the Nebraska Chamber of Commerce holds its Federal Legislative Summit, where attendees hear from federal representatives for the state of Nebraska talk about commerce and economics and issues within those spaces.

On Aug. 25, Mike Flood joined the foray in his first term as a representative, along with Sen. Ben Sasse, Congressman Don Bacon and Congressman Adrian Smith. Sen. Deb Fischer was unable to attend due to a death in the family.

"In a congress that's filled with lots of differing opinions I really appreciate being able to sit on stage and hear my colleagues answer these direct questions because we don’t get time necessarily during the day or in congress to have some of these discussions," Flood said.

Retired NASA astronaut Clayton Anderson of Ashland was the keynote speaker at the event.

His speech related to his experiences as a Nebraskan, astronaut, Ashland native and president and CEO of the summit's venue, the Strategic Air Command Museum.

"Look around," Anderson said, referring to the planes around the meeting space. "The Embassy Suites doesn't have this, the Cornhusker Hotel doesn't have this. Come back any time. We're here."

After relaying stories around his launch to and landing from the International Space Station and what it means to be Nebraska's only astronaut, Anderson closed his speech with a statement about coming back to his hometown to run the museum.

After the event, Anderson added that what makes Nebraska special is its people's ability to come together and support each other.

The topics at hand for Nebraska's legislators centered around commerce and economics in Nebraska, through a series of panel questions and short "lightning round" of more light-hearted questions such as their favorite state fair foods.

The first question related to the legislators' views on immigration; if it should change, how it works now, etc. Here, Flood revealed he will be traveling to the U.S./Mexico border Aug. 29 to see the state of affairs in regards to security there.

Primarily Flood said he was concerned about drugs and guns coming over the border when it came to immigration. Part of his visit to the border will involve inquiries about the technology needed for optimum security there.

"China is sending fentanyl to Mexico," Flood said. "Fentanyl is coming up through our southern border and it's causing first responders to respond to scenes where we have overdoses everyday in rural and urban communities across the congressional district."

Flood noted that the immigration system has made minor progress in the way of visa applications in the last year, but he wants to see it be better.

"There is a lot of rigidity, we need a system that works," Flood said. "One of the things I'm going to focus on is let's process the applications that are going through the process legally."

Flood also voiced his opposition to some of the economic decisions being made by the current administration, including the recent student loan ruling and some of the proposed banking and tax regulations.

"I think our current banking system left to its own devices is very good at discerning the risks and the opportunities and the security necessary to keep our banking system sound and we should let the market and bankers do that listening to reasonable regulation," Flood said.

As for his experiences being in the U.S. House of Representatives, Flood said he's excited to represent his district and the state.

"The breadth and the depth of the federal government is huge, there's foreign policy, there's armed services, there's national security and having the opportunity to represent Nebraska's first congressional district on those topics and those issues has been an incredible privilege," Flood said.

Flood added that while being in the U.S. House of Representatives is different from the unicameral, his experience at the state level has allowed for a smooth transition.

"Using my 10 years in the Nebraska legislature is really helping me to do that (represent the first congressional district) but just the issues are different and it's new and exciting and fun to learn the new issues," Flood said.

The environment, Flood said, can be heated at times, as it's an open discussion in a bicameral system, but that's one of the things he enjoys about it.

"What I like about the house of representatives is it's like a bar fight of politicians. I like the raucousness of it," Flood said. "I didn't think I would but I enjoy that part of it because it's a chance to express yourself."

Editor's note: Leaders of Tomorrow is a new series in which The Schuyler Sun features youths in the Colfax County community who lead by exampl…

As previously reported in July, the City of Schuyler has been in talks with Nebraska artist Oria Simonini about a mural for the community.

Invested in Schuyler: Bank of the Valley open for business

After almost a year and a half, Bank of the Valley is finally open in Schuyler. Being the third bank represented in Schuyler, employees are ex…

In the four days leading up to Schuyler Central High School's homecoming on Sept. 9, students participated in a variety of lighthearted fun ac…

Tamyra Fuller, better known as Tami, has been performing the duties of postmaster in the Schuyler Post Office since December, but in August, F…

Roger Barry has left a major impact on Schuyler Central High School and even state athletics at large. More importantly, though, he left an im…

Roll with it: Knights of Columbus' Tootsie Roll campaign returns

Every year since 1994, the Knights of Columbus have held its annual Tootsie Roll Drive in Schuyler to support a cause.

Sen. Ben Sasse, Congressman Don Bacon and Congressman Adrian Smith react as Mike Flood attempts to answer a question on a third microphone after the first two cut out while he was speaking at the Federal Legislative Summit at the Strategic Air Command (SAC) Museum on Aug. 25.

Retired NASA astronaut and Ashland native Clayton Anderson makes an expressive gesture at the end of his keynote speech at the Federal Legislative Summit at the Strategic Air Command (SAC) Museum in Ashland on Aug. 25.