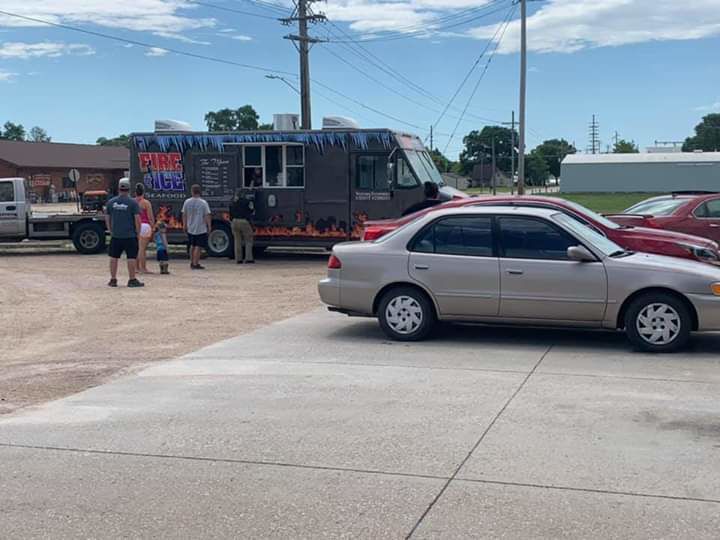 The Fire and Ice food truck outside of the Schuyler Home and Building Supply in June. 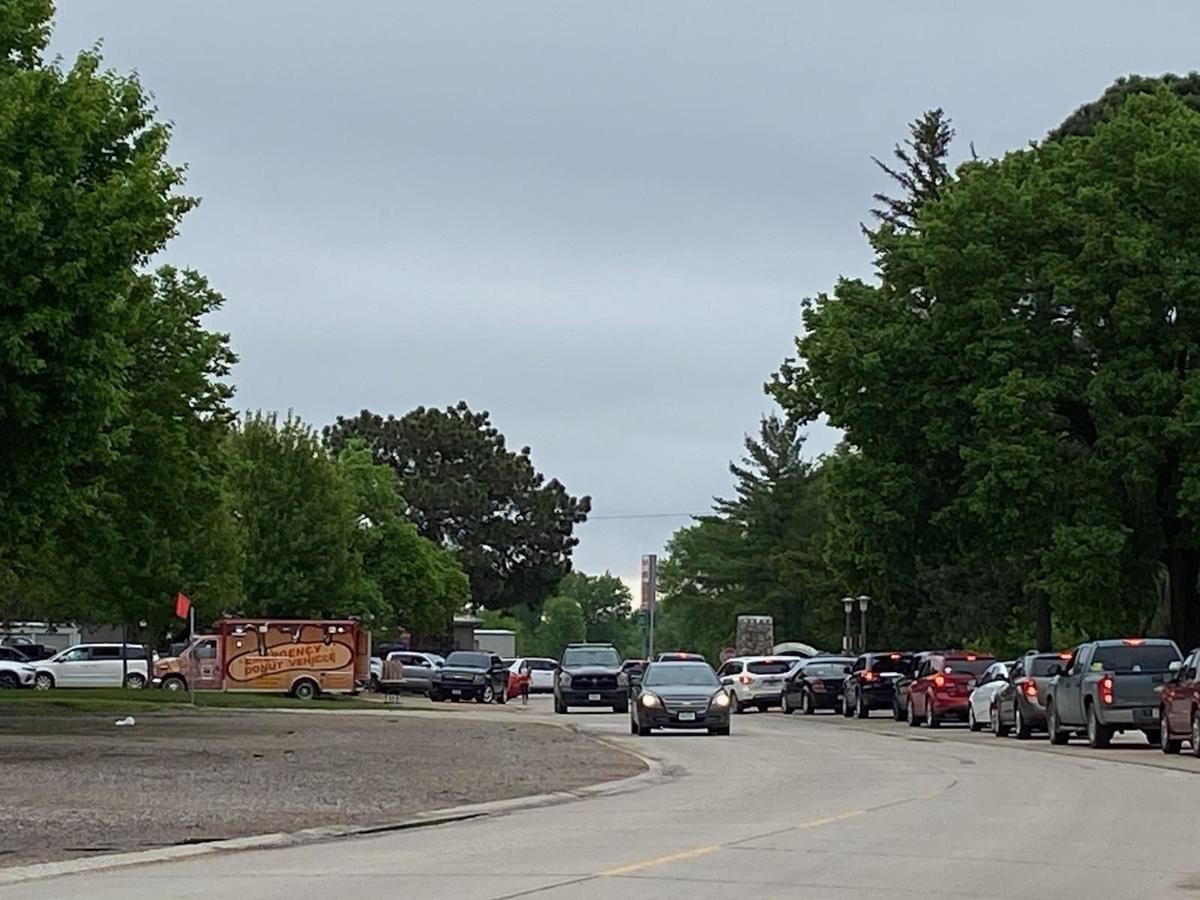 A Hurts Donut Company truck was parked outside the Oak Ballroom on Sunday as employees prepared to serve the community.

Law enforcement may be able to fine food truck vendors for failure to comply with City of Schuyler ordinances, if the City adopts new regulations discussed by the planning commission this recently, said City Clerk Lora Johnson.

The City is also looking at changing permit approval from the Schuyler City Council to Mayor Jon Knutson, changing from requiring a bond to requiring liability insurance and additional fees for selling on public property. The discussions came a month after a dispute over the Hurts Donut Company’s Emergency Donut Vehicle, but Johnson said they had some of these in the works before that happened.

“Just different issues have arose we felt we needed to make some changes and do an update to ordinances (to) better suit everyone’s needs,” Johnson said. “It will be at the July 28 meeting. They would give their recommendations to the council and they wouldn’t be approved until August’s meeting for the City Council.”

They are switching from a bond to insurance, because with a food truck, you receive the product immediately. A bond can typically be used for to protect against not receiving an adequate product or service.

In May, Hurts Donuts sent its "Emergency Donut Vehicle" to Schuyler. There was a mix-up about the ordinance versus having a permit and after multiple location changes for the truck, they finally sold their doughnuts outside of the Oak Ballroom, which Knutson said was technically in violation of city ordinances.

Johnson said the City still has not seen any paperwork or fees from the Hurts Donut Company but in the future, if the ordinance is changed, police can step in to fine people who don’t comply.

The Hurts Donut Company did not respond to a request for comment.

The potential switch to the mayor's approval could make the process a little more efficient, but it still takes seven to 10 days to process an application, she said.

For Janet Haller, one of the owners of the Fire and Ice Seafood Food Truck which came to Schuyler last week, she said these new regulations don’t make a difference because they follow the rules no matter what.

Haller owns the shop with her husband, Joe, and her son, Justin. On June 24, the food truck set up shop in Schuyler and although Haller was not there she said she know they had “a real good turnout.”

“We did better than most places,” she said. “Of course the thing is it’s not uncommon, either, for us to do really well the first time we’re at a place. Everybody wants to come check you out.”

This was the first time the Norfolk-based food truck came to Schuyler, which she said is the only town they’ve run into which required an extra bond.

“That was kind of the hold up on why we didn’t go to Schuyler right away, because of the bond that they wanted, which was not really a big deal. It was just another step and more money,” she said. “Well we’ve got the bond now. It’s just for a year. We wouldn’t have to renew it in a year. But as for right now it won’t make it any easier for us because we did obtain it.”

Haller said they call each town they visit to find out what the regulations are.

“It took us three months to get into Neligh because they didn’t have anything in place and so they had to go through the planning commission, City Council,” she said. “They meet once a month. In the third meeting they put in an ordinance.”

In some places they have found the regulations unfair and the fees high. She said they chose to pay Schuyler’s yearly fee of $125 which seemed reasonable to them.

“There’s a huge variance in a permit price. Schuyler is pretty much in the middle,” Haller said. “Whatever every town or every city wants that’s what we do.”

Students make masks for those in need

After teacher Jared Severson posted a photo online of the face masks his Warrior Academy students had made, Colfax County Deputy Emergency Man…

The champagne flowed at the Schuyler Golf Club last Thursday to christen a newly-renovated bridge, a project undertaken after flooding last Ma…

Schuyler grads get their day

For Nicole Taylor, music teacher at Schuyler Elementary School, the students who graduated from Schuyler Central High School on Saturday have …

The crowd cheered as Love’s Travel Stop employees stood in a long line and cut a red ribbon July 8 with abnormally large scissors.

ViviAnne Sayer had never entered any fashion design competitions but, just this month, she won a silver medal for fashion construction in the …

The Fire and Ice food truck outside of the Schuyler Home and Building Supply in June.

A Hurts Donut Company truck was parked outside the Oak Ballroom on Sunday as employees prepared to serve the community. 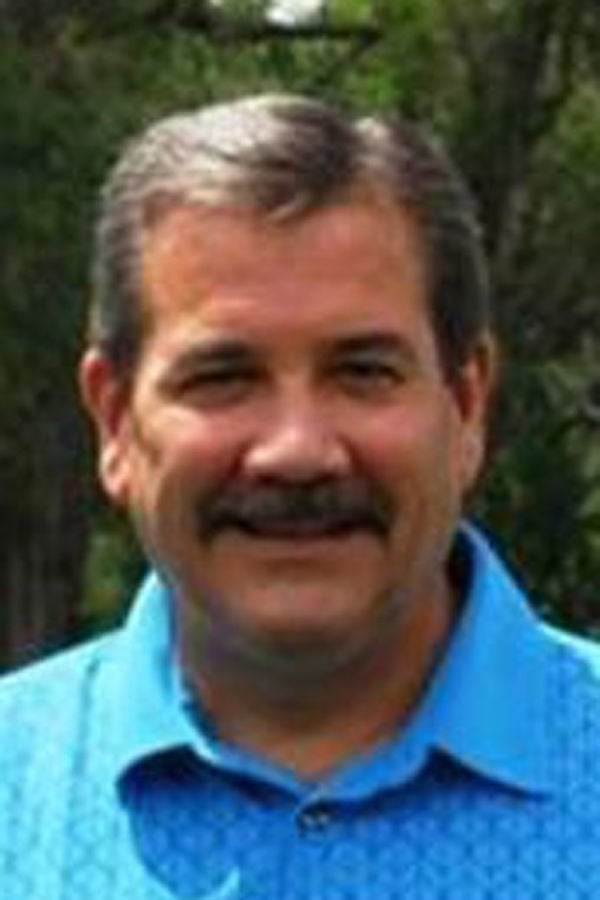