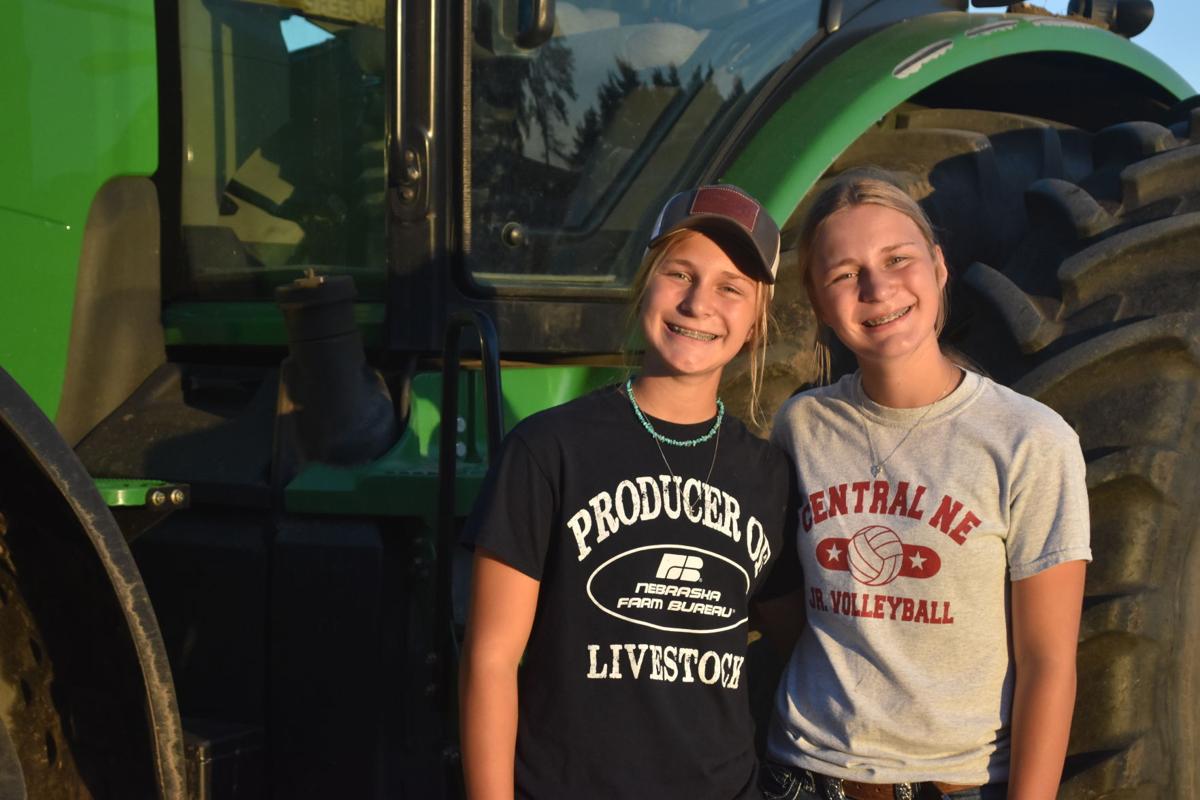 Allison and Addison Vavricek pose next to a John Deere tractor on the family Farm on Aug. 19. 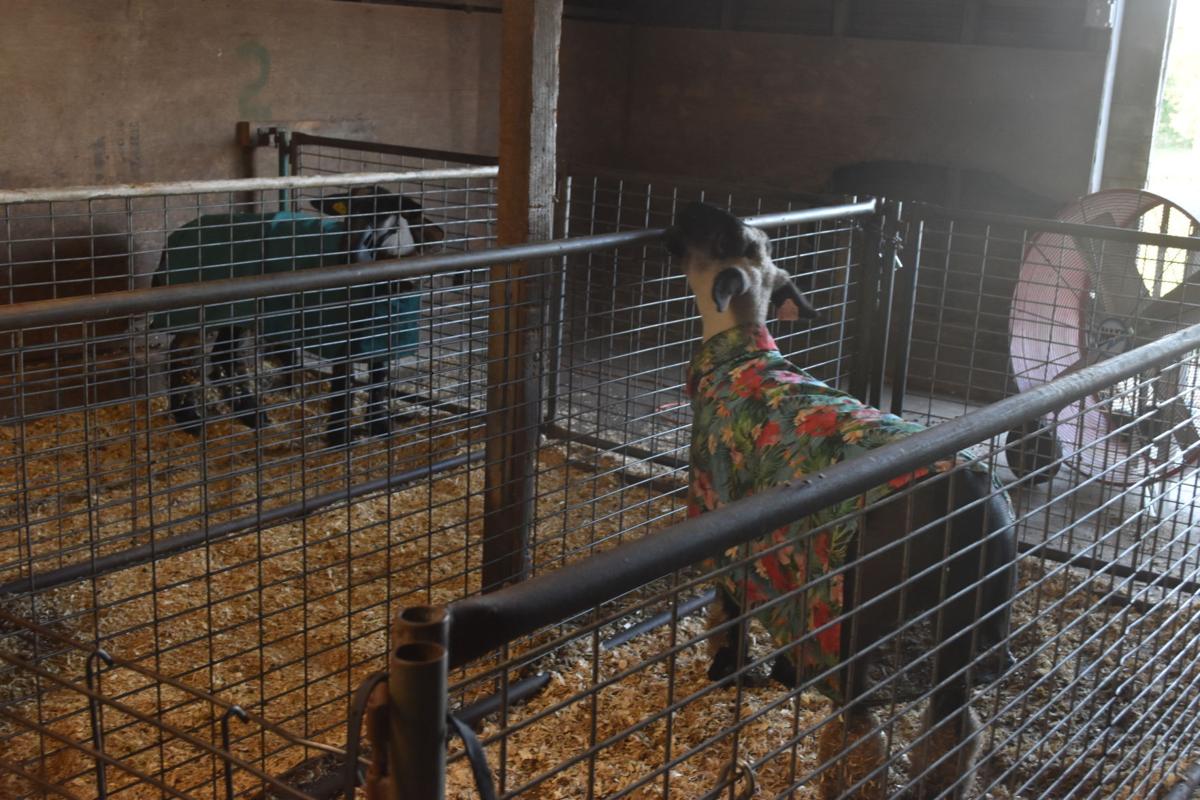 The Vavriceks' show sheep in their pens, all wearing blankets. Some have animal-print patterns. 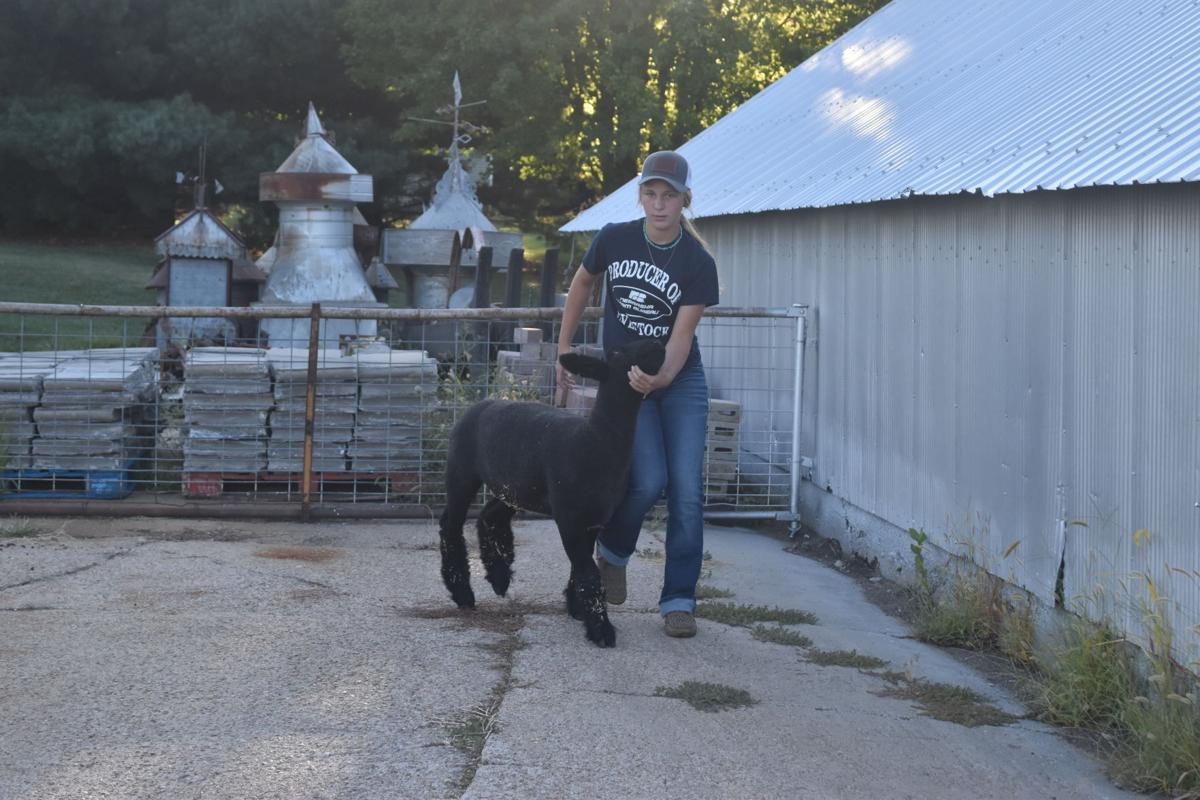 Allison Vavricek walks one of her show sheep. 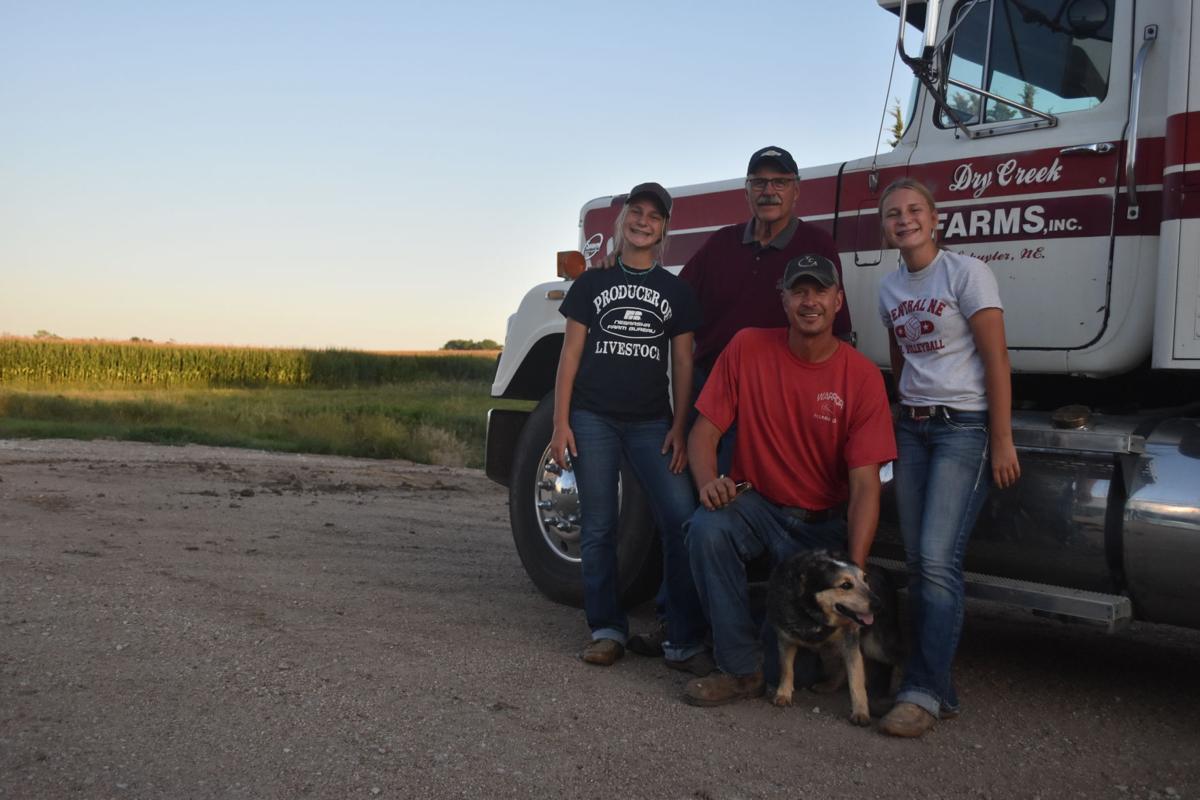 Three generations pose together, with the family dog Mack. 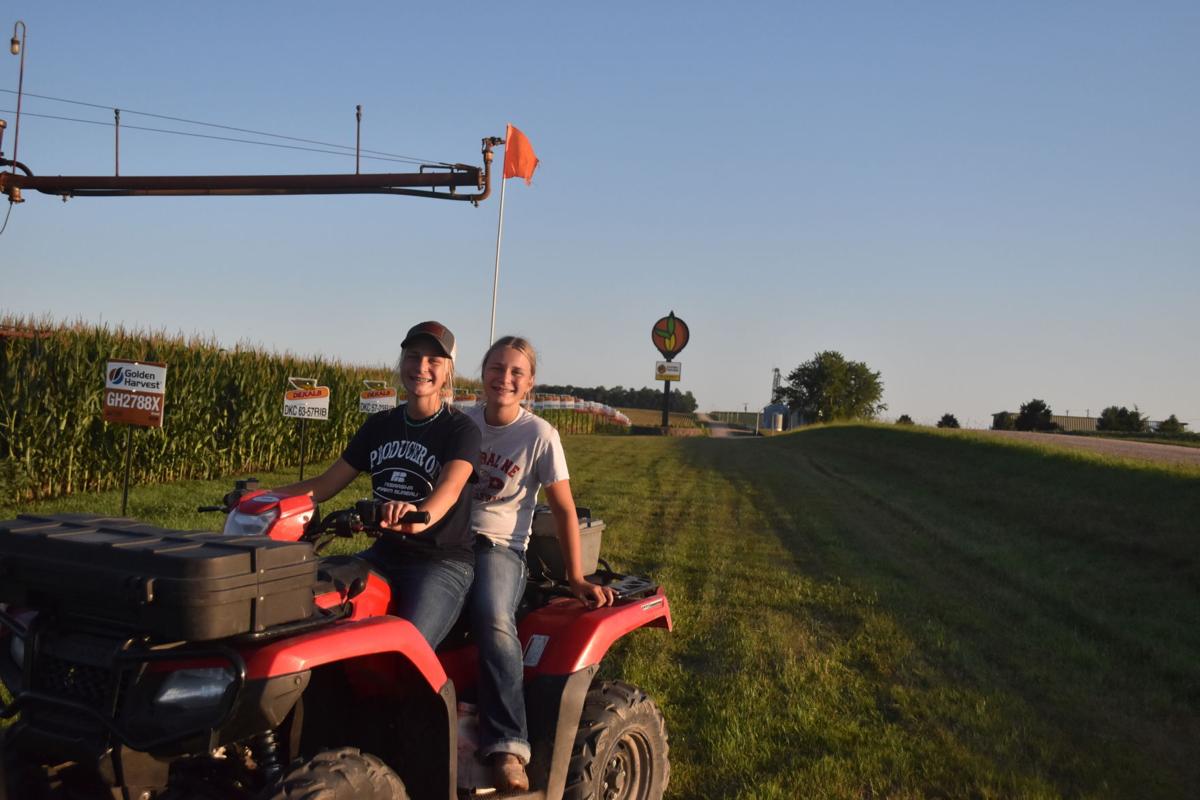 The twins drive on the side of Road 13 in Schuyler. 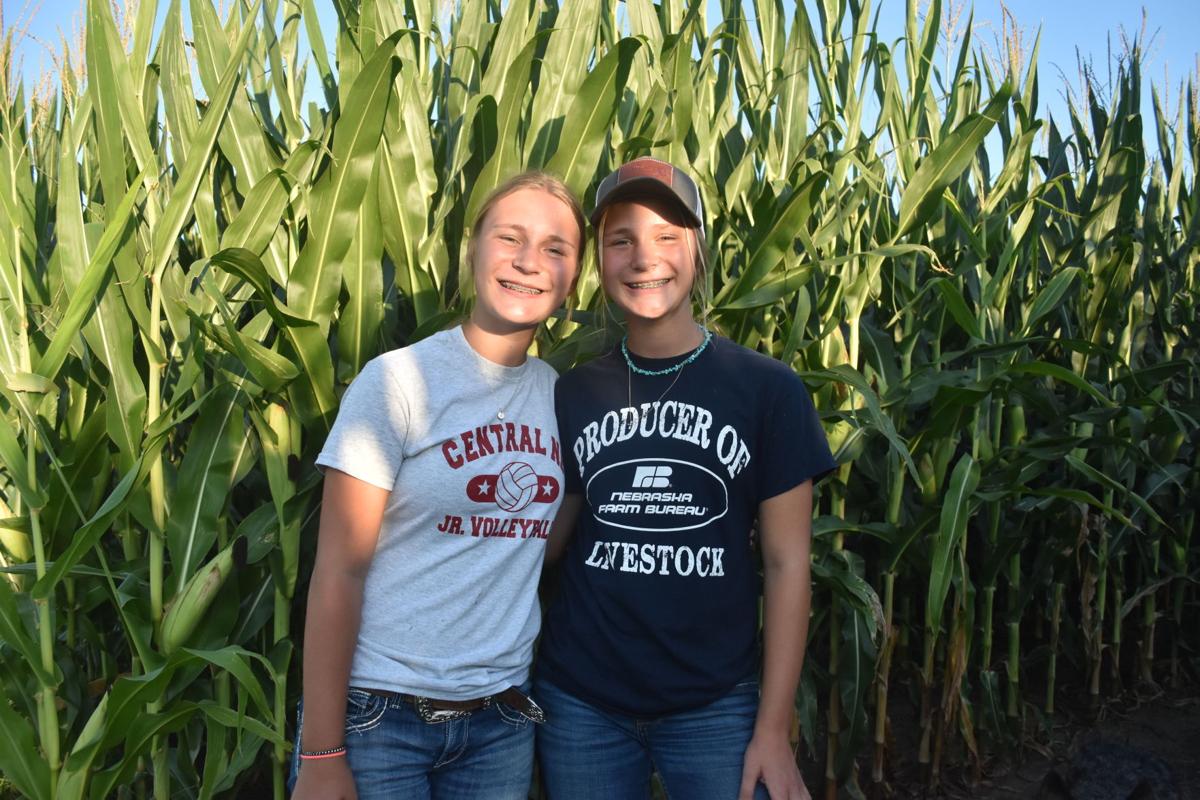 Addison and Allison Vavricek pose in front of corn on their family's farm. 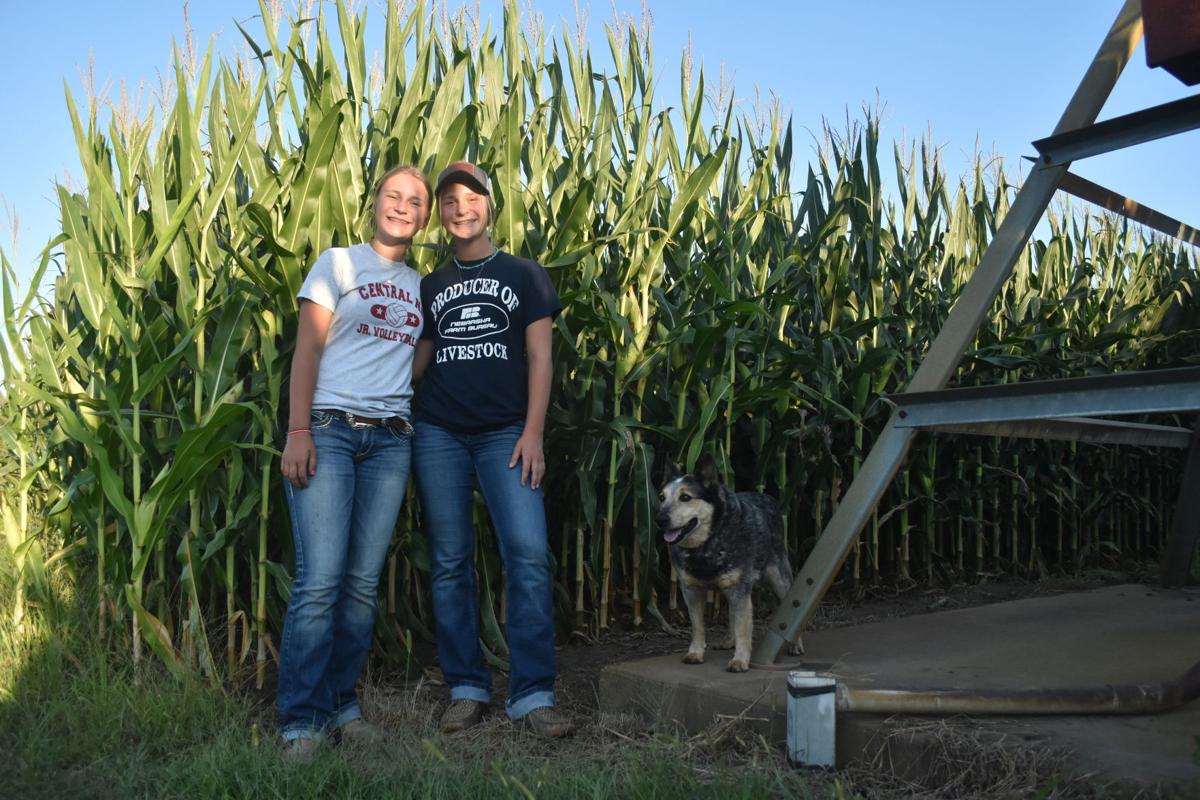 Addison, Allison and their dog Mack pose next to a pivot. 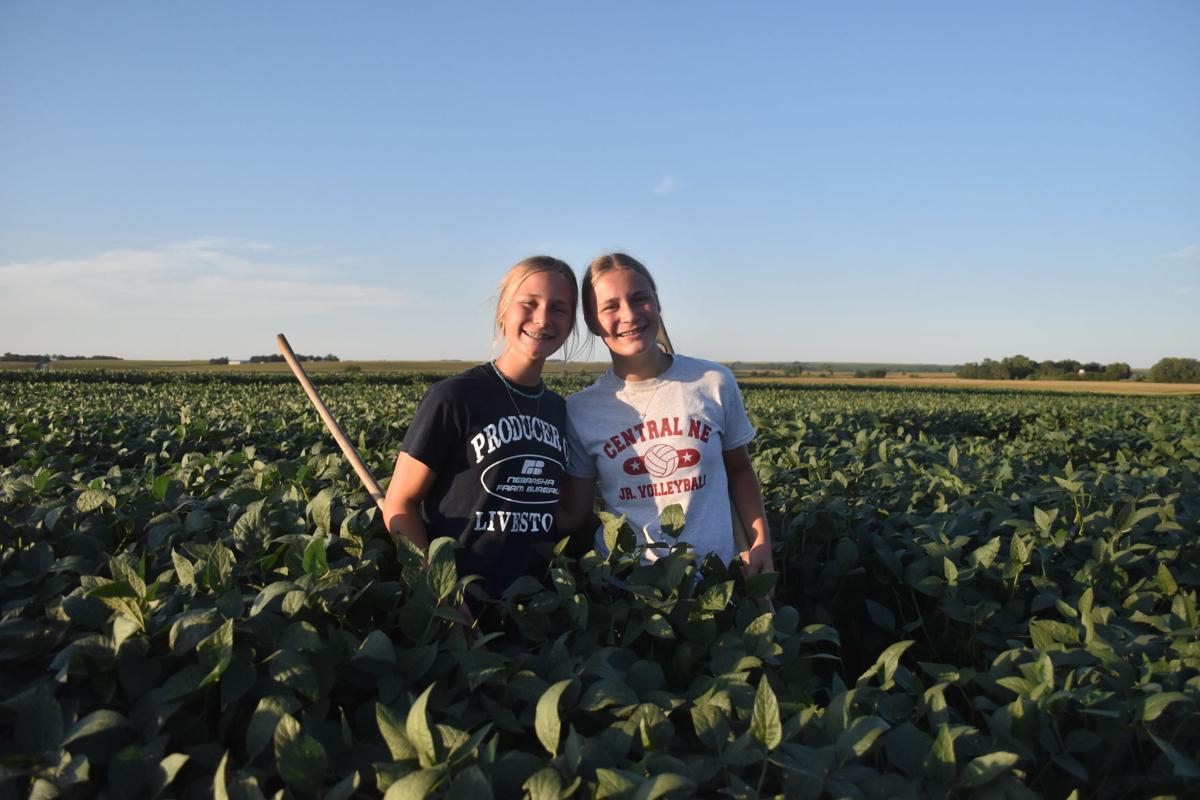 Allison and Addison Vavricek pose in a soybean field.

Addison and Allison Vavricek walked into a building with sheep, including one wearing a Hawaiian-shirt-patterned blanket. Later, they trudged through a soybean field on their family farm in Schuyler as the sun was setting on an early August evening.

The twins became the fourth generation on the land when they were born 13 years ago, not counting the family dog, Mack, who arrived around the same time.

Now, as they’ve started the eighth grade and are finally the oldest at their school, they’re gearing up for sports seasons and their father said they might help out with harvest this year.

Plus, Allison was getting sheep ready for this year's state fair and two other major shows, American Royal in Kansas City and Aksarben Stock Show in Grand Island.

The twins sat next to each other on a Zoom call inside their house for an interview in August.

“Dad just taught us to work the lawnmower over quarantine,” Addison added. “It was kind of hard at first and it was kind of swerving, but after we did it a couple of times, our lines got straighter.”

Allison said it was a little scary at first. There are some drop-offs in their yard and it is pretty easy to spin out, but they eventually got the hang of it.

They mostly do irrigating and bean-walking, the latter of which their dad said is one of his favorite jobs to have them do. They also take farmers to fields.

“One of our bigger jobs in the spring is we were cleaning out the windbreak in three different places,” Allison said.

But the two are involved in agriculture beyond the family farm.

“You can start showing in 4-H when you’re 8-years-old, so that’s when I started,” Allison said. “We didn’t actually start doing well until last year because we found some sheep breeders and now they help us out all the time.”

A good sheep, said Allison, must have a lot of butt muscle, leg wool, its shoulder and hips need to line up, and it has to have a good chest, among other criteria. But in the end, all judges have different opinions.

“I want to go to the University of Wyoming and be on the livestock judging team and eventually be a judge,” Allison said. “That would be my goal, but obviously plans change.”

Addison used to show sheep but decided to focus more on sports. Now, it’s just Allison and her older sister who show sheep.

Allison also started welding (melting metals together) when she began 4-H after her dad and grandfather helped teach her. Although at first she was afraid of the sparks, since then she’s made an owl, a truck, a hot air balloon, and a big metal wheel with a V on it to put on the farm.

For 4-H, Addison does a lot of woodworking, which her dad and grandfather also helped teach her.

“I redid this nightstand and painted it and sanded it and I make signs sometimes,” Addison said.

Farming isn’t the only place the two excel. They both play basketball, soccer, volleyball, track and do competitive dance. Their father taught them the way of the farm and is their basketball coach.

“He wants us to practice (basketball) more,” Allison said.

How do they manage to fit all this in? They go to school, they practice after school and they work with sheep after that.

“In the summer, it’s mostly just working for dad and we find the time to practice our sports when we’re not working,” Allison said. “We usually have to wake up early and go to bed pretty early.”

Addison sleeps in a little later than Allison. She wakes up at 7 or 8 as compared to 6 a.m.

Addison also likes to read, and over quarantine has been reading a lot. One of her favorite books is "The Hunger Games."

In the book, children from various districts compete to the death for the Capitol and its tyrannical leader President Snow. Katniss, the heroine from District 12, is torn between two boys, her best friend Gale and the baker's son, Peeta. Allison thinks Katniss should have chosen Gale. Addison said Peeta.

Two of the sheep are actually named Gale and Peeta.

“The best one’s name is Gale because Gale is better,” said Allison, as her sister shook her head.

Family is important to them, and they said it’s special to be a twin.

“It’s easier because you just have someone who can always be with you and you’re not as nervous for things,” Addison said.

On the farm that late August evening, the twins rode on a four-wheeler together, operated and helped explain how machinery works together.

“I can’t imagine not having that because I would be so nervous to do stuff by myself,” Allison added. “We just can tell each other everything and we say the same things and sometimes think the same things.”

It’s also easier to practice with another person, the two said, but sometimes it can be easier to fight if they’re together a lot. It’s fun having a best friend all the time, Allison said.

“It’s pretty amazing to have a front-row seat to their bond,” said Cori, their mother. “It’s pretty magical.”

They switch their desks or sweatshirts at school sometimes and their teachers don’t notice, but it didn’t work on their parents the one time they tried.

Next year, the two will be able to do Future Farmers of America.

“I’m excited to take all the classes and kind of find out what I’m good at and what we want to do in college,” Allison said.

Although the pandemic has changed a lot, the two were able to take a break from sports and just focus on helping their dad.

“It was a nice break to have and to spend time with our family,” Addison said.

Their dad always turns stuff into a life lesson, the twins said, and taught them agriculture is important.

“He teaches us to be hardworking,” Allison said. “You have to work for everything you have and (know) not everything’s going to get handed to you.”

Cash Fehringer and his mom, Kim, didn’t realize his exhibits at this year’s state fair would be judged, so they were surprised when he claimed…

Last December, Steve Avery recalled a mutual friend stopping by his office with some news – Schuyler was looking for a restaurant.

There seems to be some contention regarding a house in Schuyler between the City and a father-son rental business that wants to save it.

Allison and Addison Vavricek pose next to a John Deere tractor on the family Farm on Aug. 19.

The Vavriceks' show sheep in their pens, all wearing blankets. Some have animal-print patterns.

Allison Vavricek walks one of her show sheep.

Three generations pose together, with the family dog Mack.

The twins drive on the side of Road 13 in Schuyler.

Addison and Allison Vavricek pose in front of corn on their family's farm.

Addison, Allison and their dog Mack pose next to a pivot.

Allison and Addison Vavricek pose in a soybean field.