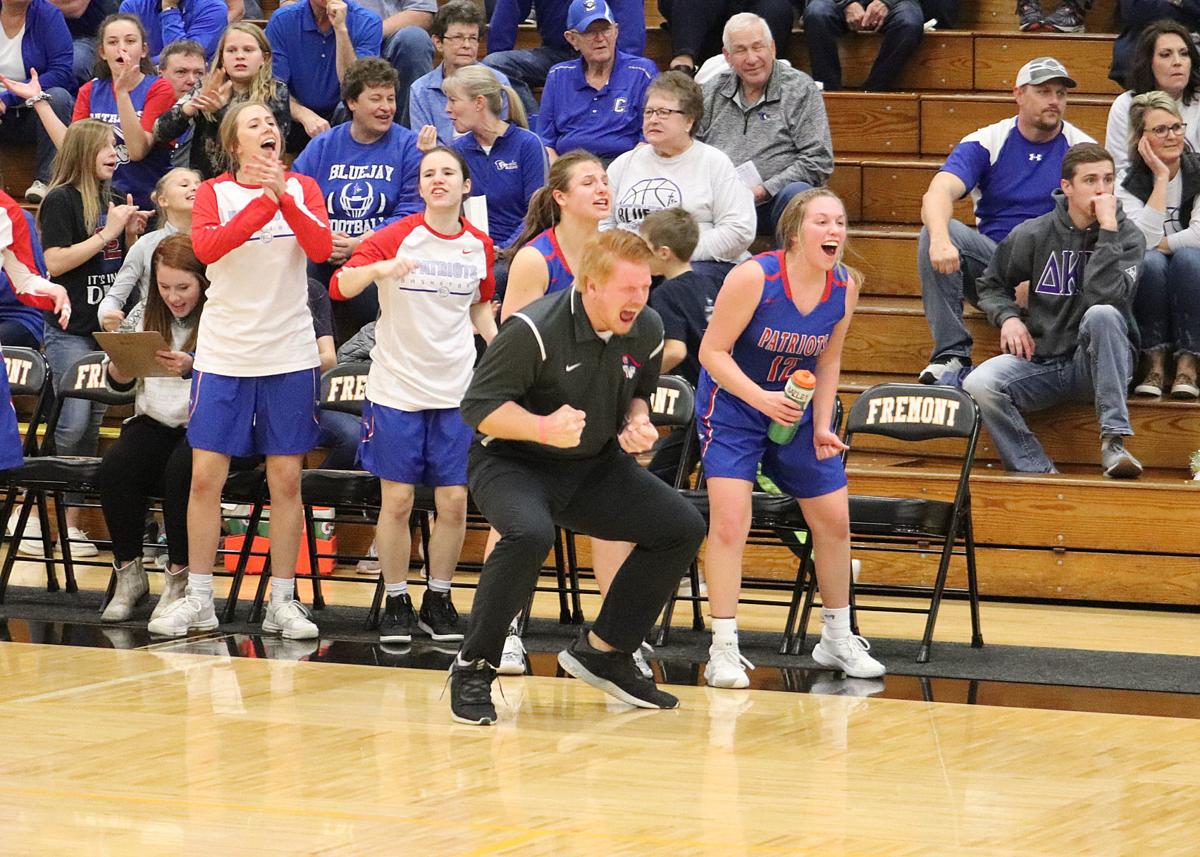 Clarkson/Leigh head coach Matt Murren and the Patriot bench celebrates after a big play at the district final in Fremont. Clarkson/Leigh defeated West Point GACC to earn its first-ever trip to the state tournament. 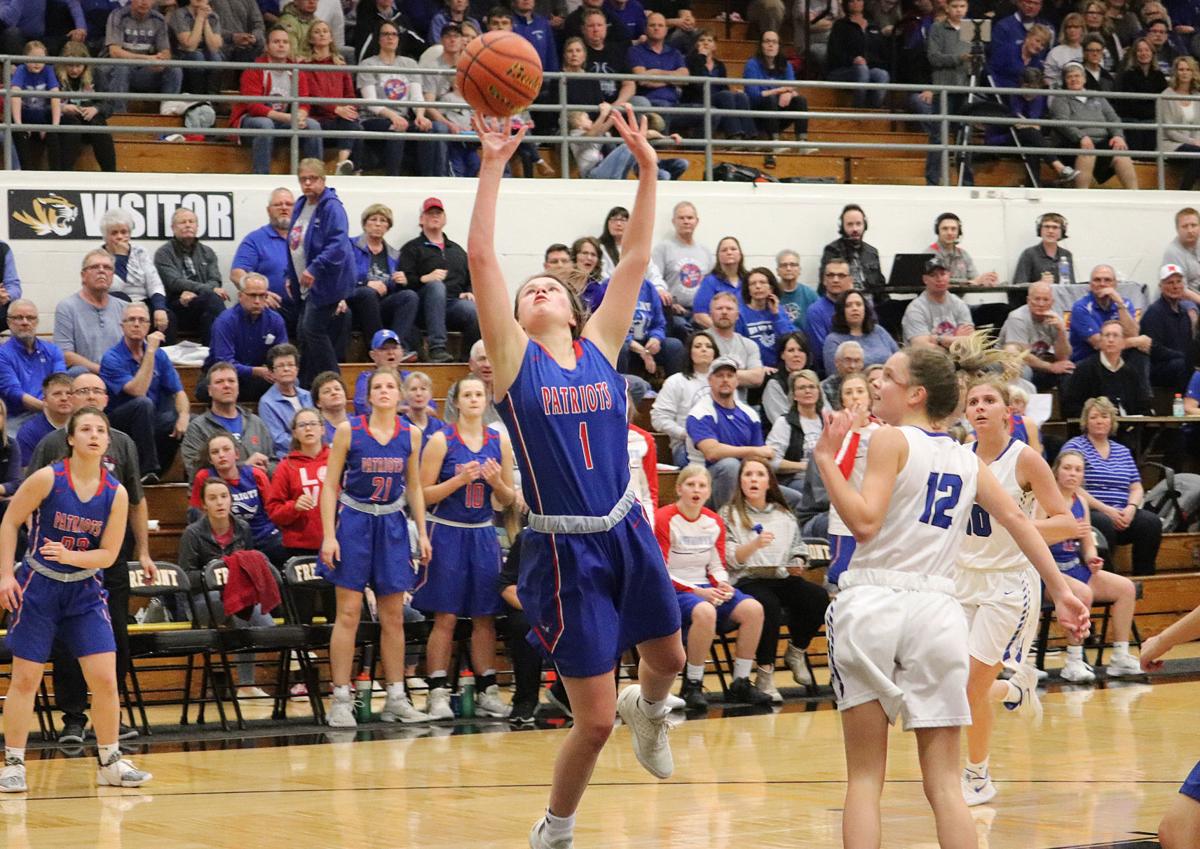 Clarkson/Leigh senior Ashlynn Novotny goes up for a layup during the district championship against West Point GACC. The Patriots are headed to their first ever state tournament after a 45-44 win over the Bluejays. 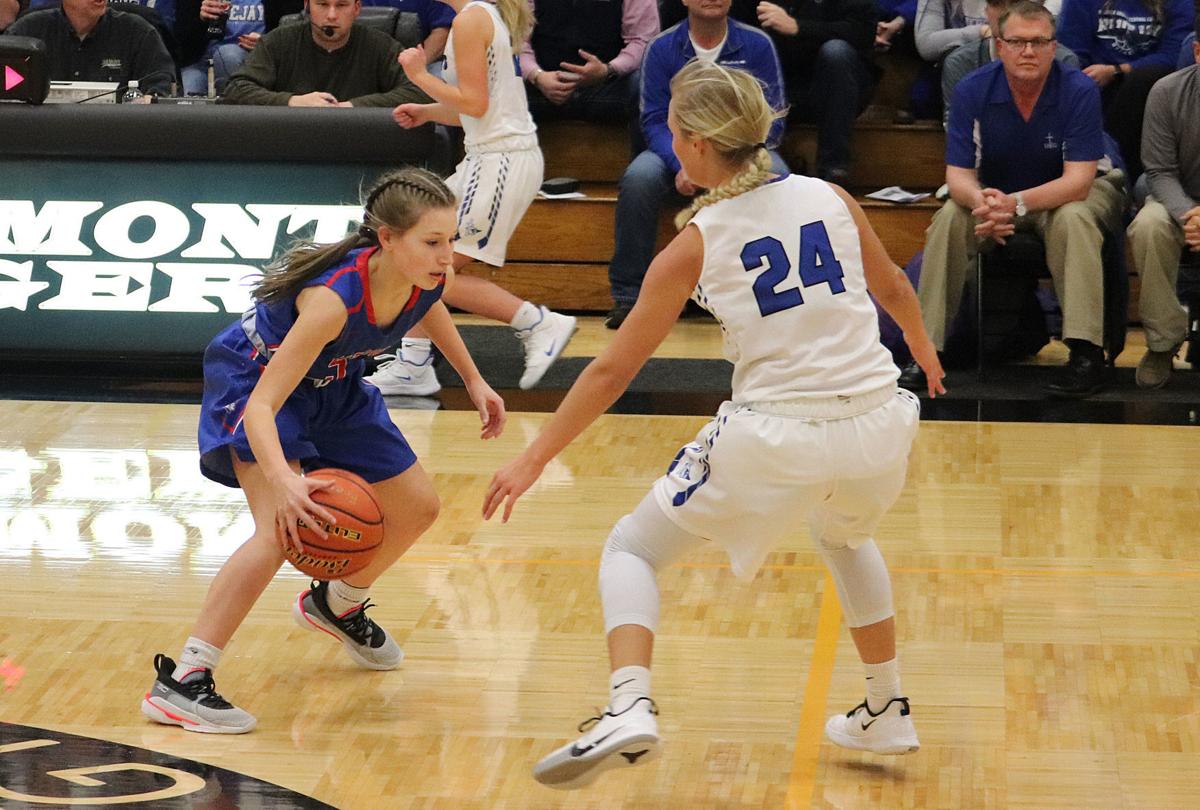 When Clarkson/Leigh head coach Matt Murren makes up a game plan, he normally lists a dance move that he'll perform in the locker room if the Patriots are victorious.

He never got a chance to show off his moves on Friday. After a 45-44 win over West Point Guardian Angels Central Catholic in the district final played in Fremont, the Clarkson/Leigh student section and many Patriot fans started their own dance on the court with the team.

"It was wild," Murren said. "I’ve probably watched it 50 times now on film. The girls all sprinted to half court. The fans in the stands were going wild. The student section was going wild. Coaches were going wild. It was quite the scene. It was awesome to see the raw emotion the girls showed after the final buzzer sounded."

In the opening minutes of the game it didn't appear that any Clarkson/Leigh fans were going to be celebrating after the Patriots (20-5) trailed by 9-0. But thanks to a 3-pointer by backup player Faith Indra, and a big first half by Kayden Schumacher, Clarkson/Leigh clawed back into it.

Alissa Kasik then went on her own personal scoring run in the fourth quarter that gave the Patriots the lead for good. GACC scored to cut it to one in the final seconds. But without any timeouts, and with less than five seconds showing on the scoreboard, all the Bluejays could do was watch as the Patriots let the clock hit zero and celebrate the first state tournament in program history.

"We just kept our composure," Murren said about the big early deficit. "That’s something we talked about the whole time. We called a timeout and talked to the kids. The girls kept their composure and played extremely hard from start to finish regardless of the score.

"Realistically it was just a timeout and we just talked. There was no yelling. That wasn’t going to do any good. It was just calm and we need to settle in here. 'We’re fine. We need to start doing the things we do.' We made a couple of errors. It was more of a calm timeout, getting everyone to take a deep breath and relax and calm down and enjoy the moment."

Clarkson/Leigh then went on a run in the fourth quarter and outscored GACC 20-16.

After falling behind 9-0, the Patriots finally made their first basket of the game over halfway through the first quarter. Indra came off the bench to hit a big 3, which sparked the Clarkson/Leigh offense and settled the Patriot nerves.

Clarkson/Leigh still trailed 10-4, but then Schumacher began to go to work.

In the fourth quarter, the Patriots were down 33-32 when Kasik hit a 3-pointer, sank a short jumper on the next trip then capped off her own personal run with another shot from behind the arc for a four-point Clarkson/Leigh lead with just over three minutes left.

The Patriots never trailed from that point on.

Clarkson/Leigh now prepares for the state tournament where it plays No. 1 Oakland-Craig (25-1) at 2 p.m. on Thursday at Lincoln North Star.

"We had a really good year last year," Murren said. "This year we’ve done so many good things. We’ve improved from start to finish and this team is the closest tight-knit team I’ve ever coached. They all get along. They get along.

Since the end of the game it's been non-stop getting ready for Thursday.

"It’s been a blast," Murren said. "From Friday night to now, just getting things ready, as far as t-shirt orders and state lodging, transportation things like that. It’s just been a lot of fun. It’s a new experience. It’ll be the first time we’ve ever practiced in March as a program. It’s just been a whirlwind for the last 48 hours."

Peter Huguenin is a sports reporter for the Schuyler Sun. Reach him via email at SCHsports@lee.net

LINCOLN - Clarkson/Leigh's first-ever trip to the state tournament was made a short one Thursday afternoon by No. 1 Oakland-Craig in a foul-fi…

Clarkson/Leigh head coach Matt Murren and the Patriot bench celebrates after a big play at the district final in Fremont. Clarkson/Leigh defeated West Point GACC to earn its first-ever trip to the state tournament.

Clarkson/Leigh senior Ashlynn Novotny goes up for a layup during the district championship against West Point GACC. The Patriots are headed to their first ever state tournament after a 45-44 win over the Bluejays.