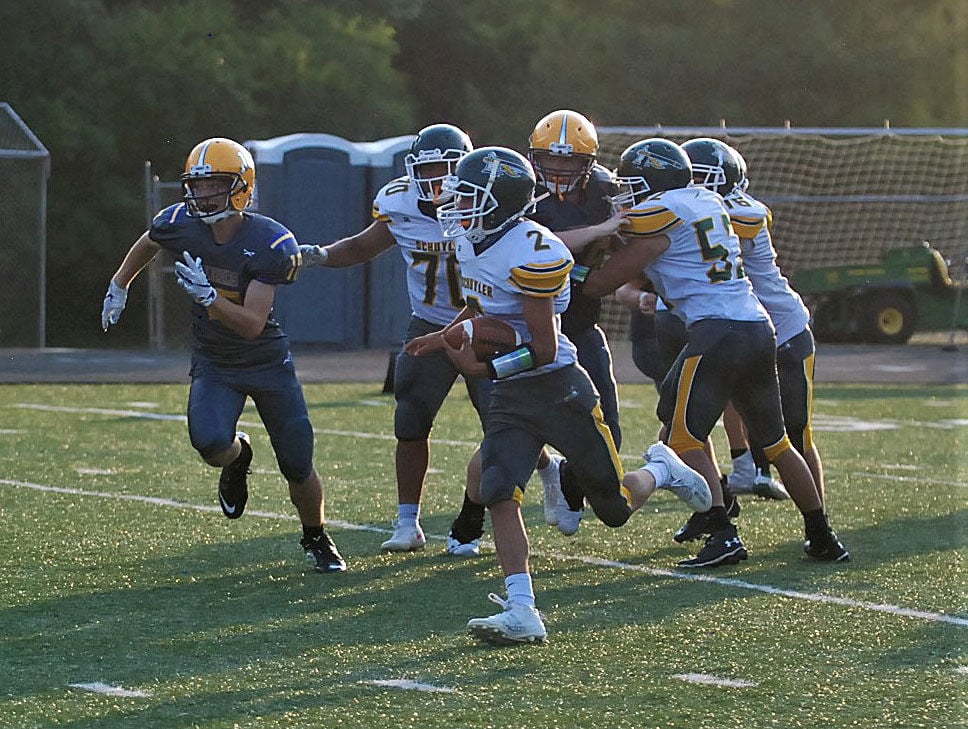 Diego Svoboda turns the corner for a big gain on Friday in Nebraska City. Svoboda caught five passes for 60 yards in a 36-6 defeat. 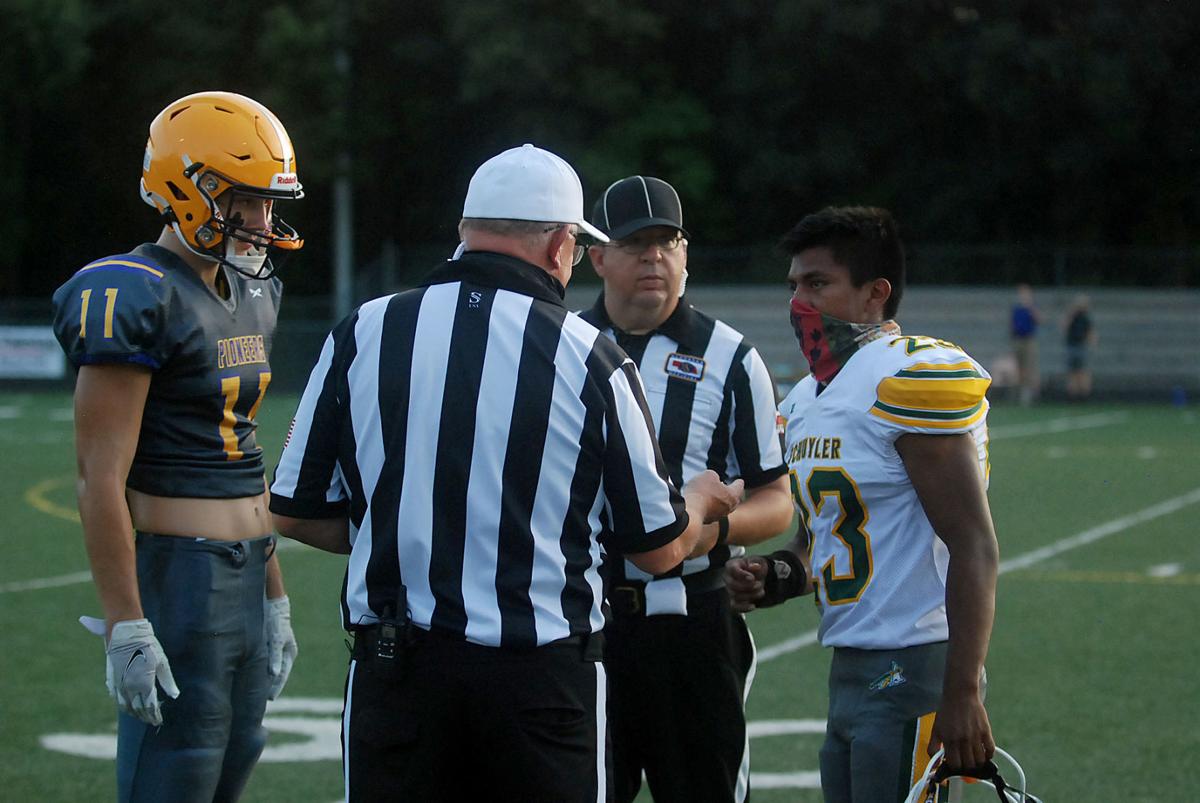 The Schuyler Central High School Warriors learned the hard way against the Nebraska City Pioneers last Friday night that they will have a difficult time overcoming their own mistakes against any team that they play this season. Three turnovers, two touchdowns called back by penalties, a missed field goal and extra point and several missed tackles on defense spelled doom for the Warriors as they dropped a 36-6 battle to the Pioneers in Nebraska City.

The loss dropped Schuyler to 0-2 on the season while the Pioneers won their season opener before a nice crowd on Senior Night.

SCHS quarterback sensation Dennis Martinez scampered 20 yards on the first offensive play from scrimmage, part of his 74 rushing yards in the game on 18 carries, but that drive ended near midfield and was an omen for how the Schuyler offense would fare against the Nebraska City defense.

Nebraska City quarterback MJ Nelson took over and led his team 46 yards to the opening points on five plays, culminating the drive with an 11-yard pass to Riley Wehling, giving the Pioneers a 7-0 lead with 3 and 1/2 minutes to go in the first quarter.

Schuyler followed with an impressive 11-play drive thatwent deep into Pioneer territory. But a two-yard run by Johnathan Gonzales on fourth-and-four at the Nebraska City 5-yard line ended the drive and handed the ball over to the home team.

The Pioneers went 94 yards on only four plays as Nelson connected with Braden Thompson on a 42-yard touchdown strike to open up a 14-0 lead.

Schuyler delighted their fans on the following kickoff as Diego Maganda scampered 82 yards for an apparent Warrior touchdown, but the play was nullified by a block in the back penalty.

Nebraska City’s defense then went into scoring mode as Baylor Poston picked off an errant Martinez pass and took it all the way to the end zone for a 35-yard score. That play left the Pioneers with a 21-0 lead after one quarter of play.

Midway through the second quarter the Warriors drove deep into Pioneer territory once again, but a 33-yard field goal attempt by Maganda fell a couple of feet short off the crossbar, ending the Schuyler threat.

Nelson teamed up with his wideout Wehling once again on a beautiful 50-yard scoring strike with 1:55 to go in the first half, giving the Pioneers a comfortable 28-0 lead over the Warriors at the intermission break.

Schuyler Central head coach Jason Ankrah stated that his team must eliminate the big plays if it is going to win games this season.

“We have got to limit the big plays and we have to communicate because there was no communication out here on defense tonight,” said Ankrah. “Our kids were caught off guard by how they were doing things on offense, but we just have to learn to adjust.”

Nebraska City scored less than two minutes into the second half to make it 36-0 when Nelson completed his fourth touchdown pass of the game, this time covering 22 yards to Thompson.

With the running clock rule in effect, the Pioneers put the game away, playing their reserves for much of the fourth quarter.

The bright spot for the Warriors came on defense by Maganda when he picked off a Nelson passed and returned it 60 yards for a Schuyler touchdown midway through the third quarter. The extra point kick attempt by Maganda sailed wide of the left upright.

Offensively, the Warriors rushed for 125 yards on 35 carries, and Martinez completed six passes in 15 attempts for 69 yards giving Schuyler 194 yards of total offense in the contest. The Schuyler Central defense allowed 164 rushing yards and another 182 through the air for a total yardage count of 346.

Despite the loss, coach Ankrah felt good about the way that his younger players stepped things up in the second half, and he looks for even better things to happen as the season moves forward.

“That sophomore group has some heart,” stated Ankrah. “There are also some freshmen that you will see more of in the coming games. Really, the whole team has heart. The whole team will fight. Our guys may not be physically up to par with some other people, but I tell them all the time that doesn’t matter. I will take heart over size any day.”

The Warriors return to action Friday night when they take on D.C. West at 7:00 p.m. at the Schuyler football complex.

Doug Phillips is a freelance writer for the Sun. Reach him via email at SCHsports@lee.net.

Local Schuyler residents may have noticed a group of dancers wearing large orange hats and a dancer in a tiger costume in the middle. That dan…

Every time the Big Ten conference big wigs have a chance to totally redeem themselves, they hit into a triple play to end the inning.

Ellie and Grace Baumert were responsible for 40 points in four sets in Sept. 8 Howells-Dodge bounce back victories over Pender and Tri-County …

Schuyler sophomore quarterback Dennis Martinez had a big night, but Sandy Creek's Michah Biltoft had a bigger one and led his squad to a 37-20…

Diego Svoboda turns the corner for a big gain on Friday in Nebraska City. Svoboda caught five passes for 60 yards in a 36-6 defeat.