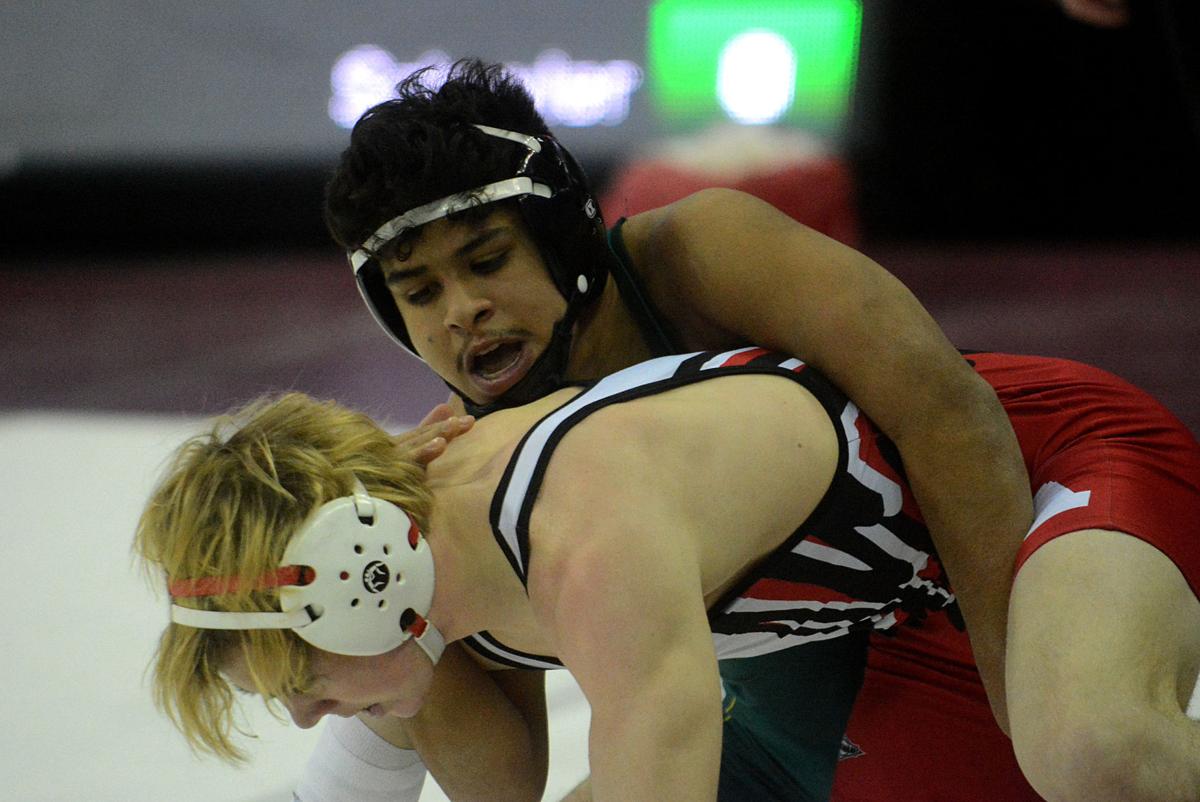 Diego Maganda works to keep his opponent on the mat at the state tournament. Maganda won twice and came up one match short of the medal round. 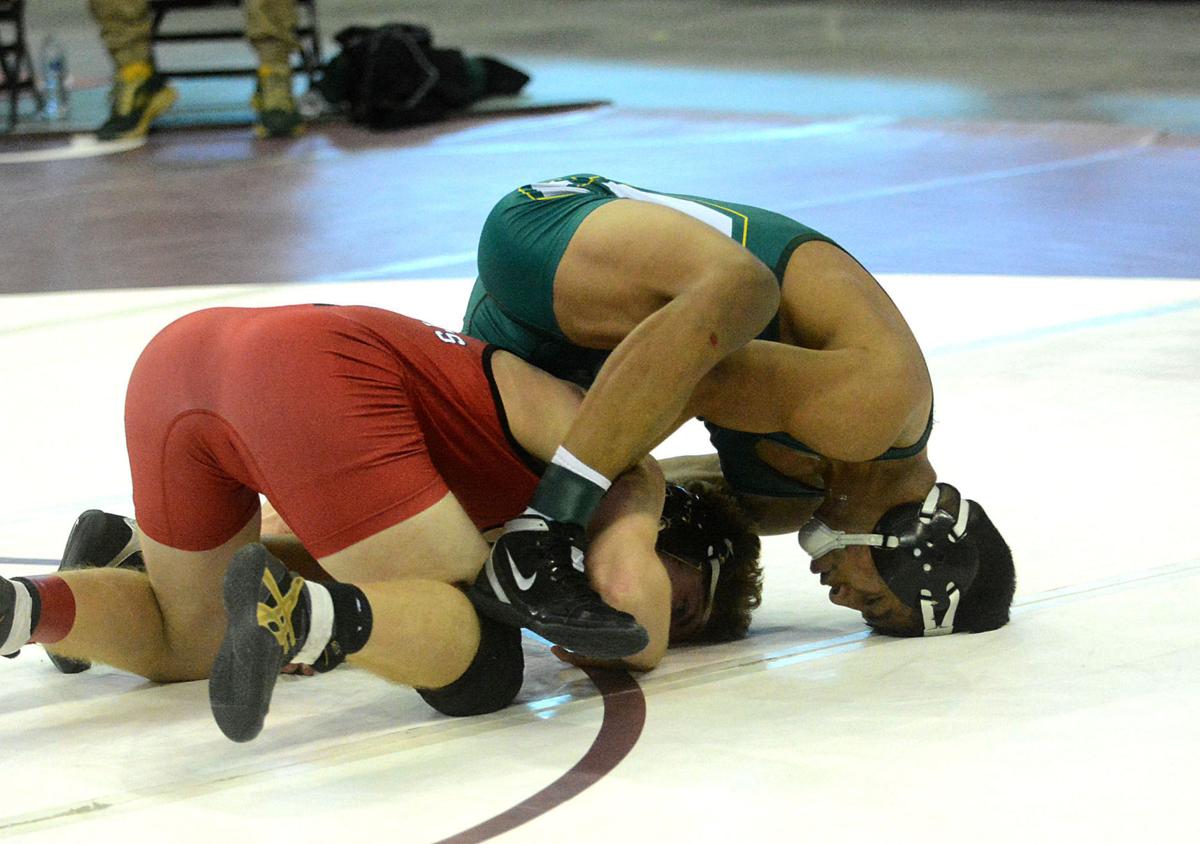 Schuyler senior Johnny Gonzalez fights for control during a match at the state tournament in Omaha. 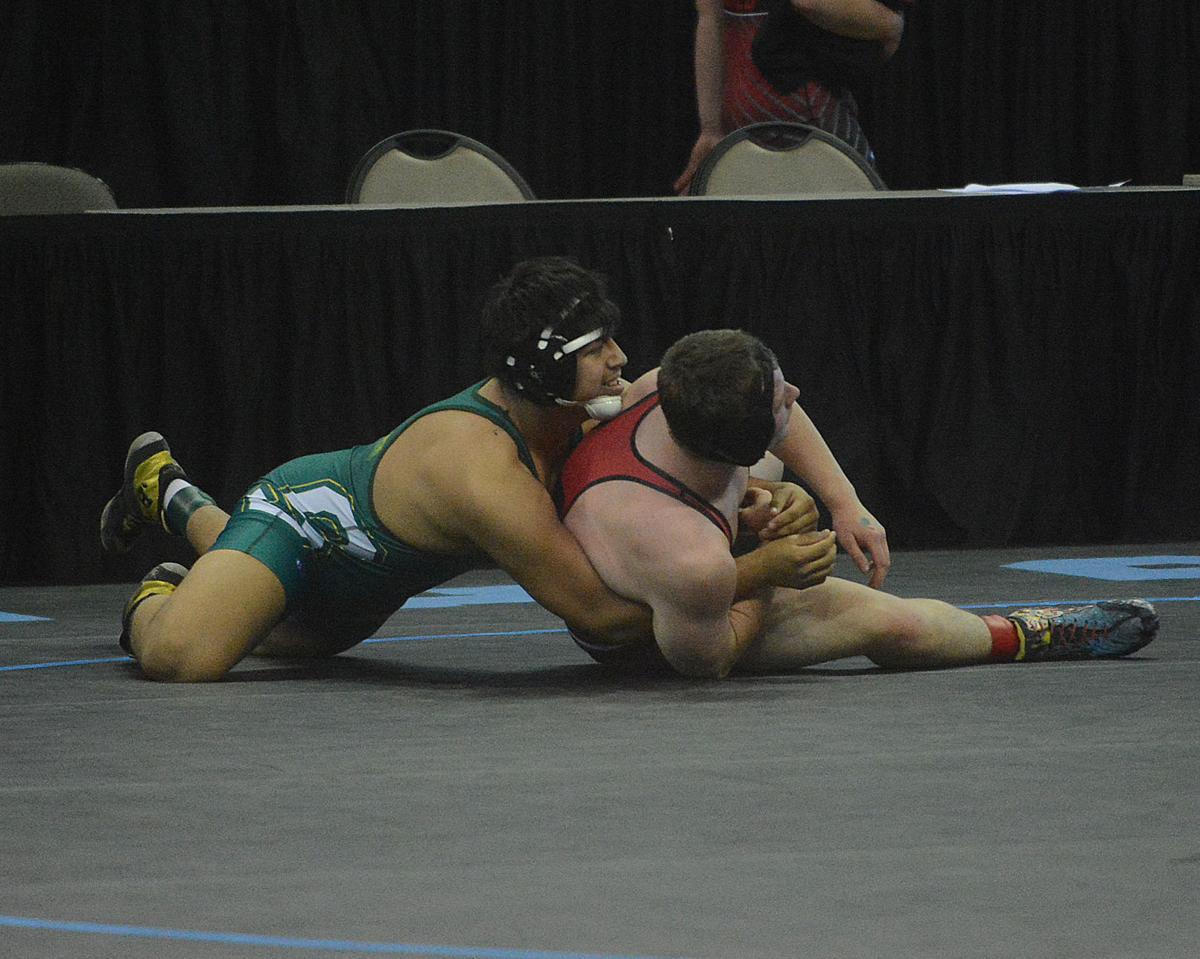 Schuyler junior Gabriel Moyao scores a takedown during a match at the state tournament. Moyao won a match in his first trip to Omaha. 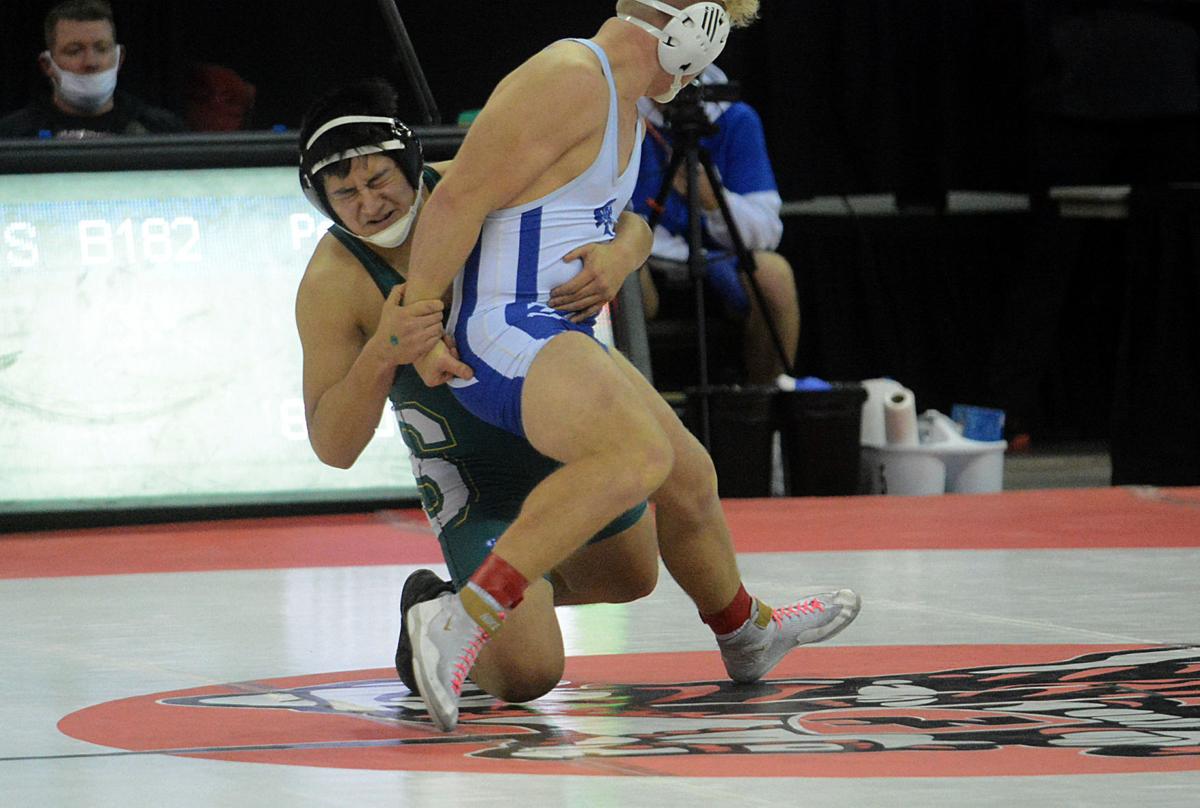 Schuyler junior Edgar Diego fights for control during a match at the state tournament.

OMAHA - Four Schuyler wrestlers won three matches last week at the state tournament in Omaha. Initially, that doesn't sound like much of an achievement. But considering all four came in as 3 or 4 seeds, the Warriors were a group of overachievers, coach Jeremy Hlavac said.

Senior Johnny Gonzalez (145 pounds), sophomore Diego Maganda (152), junior Edgar Diego (182) and junior Gabriel Moyao (195) represented Schuyler in the Class B tournament at the CHI Health Center. Maganda won two matches, coming one victory short of making the medal round. Moyao lost his opener but bounced back with a win before elimination.

"Coming into the state tournament with three fourths and a third place, that's an uphill battle right away. I thought we performed probably better than expected," Hlavac said. "Gabriel had a big win, Diego made it to the heartbreak round, and I was real pleased with it. Johnny, our senior making it to state, completed a really good year, and Edgar Diego, what a good story."

Diego came to Omaha with a 10-15 mark following fourth at the district meet with a 2-2 performance and a 1-1 showing at the subdistrict tournament for third.

He suffered two pins in Omaha - one to the No. 6 ranked wrestler by the coaches association and another with a 31-5 record but built some momentum for the future.

Gonzalez had his career rewarded with a state tournament that saw him lose 10-2 and by fall. His defeats came at the hands of the No. 3 wrestler and another with a 29-9 record. Hlavac pointed to Gonzalez as an example of what perseverance and hard work can do over the course of a career.

Moyao was pinned in the first round with three seconds left in the first period, came back for a 5-2 win then was pinned by the eventual fourth-place medal winner. He scored his victory over 22-15 Hunter Ahrendt of Sidney 5-2 on takedowns in the second and third periods.

Maganda opened with a 15-4 major decision over Brad Hall of Auburn then lost by fall to No. 2 Cameron Zink of Ogallala. The two were tie 1-1 after six minutes and couldn't decide it in sudden victory time. The overtime flip went to Zink, he deferred and Maganda took bottom. Zink kept him to the mat and pinned him with five seconds showing on the clock.

Maganda bounced back with a pin of 28-14 Lee Hobbs of Nebraska City in the second period after building a 6-3 lead but then went beyond six minutes again and took a frustrating 2-1 loss in sudden victory time to 35-12 Daniel Wellnitz of Chadron.

Just like the quarterfinal loss, Maganda went to sudden victory time tied 1-1. A stalling call at the end of regulation proved to be a deciding factor when Maganda was called for another and was eliminated with a 2-1 defeat.

"The thing that I talked to him the most about was how close he came this year," Hlavac said. "He needs to use this season and that state tournament experience as more fuel for the fire for next year."

That was clearly the case when class was back in session on Monday. Maganda was already in conversation with Hlavac about returning to the wrestling room, what the offseason looked like and he wasn't the only one.

"I had several boys, him included, ask when we're going to get on the mat and start our offseason so we can get ready for AAU and USA State," Hlavac said. "I've got guys that are already ready one day off of a break."

Schuyler sent two to Omaha a year ago and came away with one medal. Though the Warriors were shut out of the podium this time around, they will be older next season and with all but four spots in the lineup set to return.

"We have points coming back for next year, we have kids in the right place with the right mindset and we have a lot of sophomores and juniors that barely missed districts," Hlavac said. "When you have those leaders like a Diego Maganda, Edgar Diego and Gabriel Moyao in the room now, the expectation is just raised."

Nate Tenopir is the sports editor of the Schuyler Sun. Reach him via email at SCHsports@lee.net.

I have taken the time to do this in the past, but with more and more Covid restrictions being lifted and loosened, I thought it was time for a…

Howells-Dodge wrestling sent six members to state a year ago and collected four medals. All four were won by seniors. The two holdovers, junio…

Diego Maganda works to keep his opponent on the mat at the state tournament. Maganda won twice and came up one match short of the medal round.

Schuyler senior Johnny Gonzalez fights for control during a match at the state tournament in Omaha.

Schuyler junior Gabriel Moyao scores a takedown during a match at the state tournament. Moyao won a match in his first trip to Omaha.

Schuyler junior Edgar Diego fights for control during a match at the state tournament.