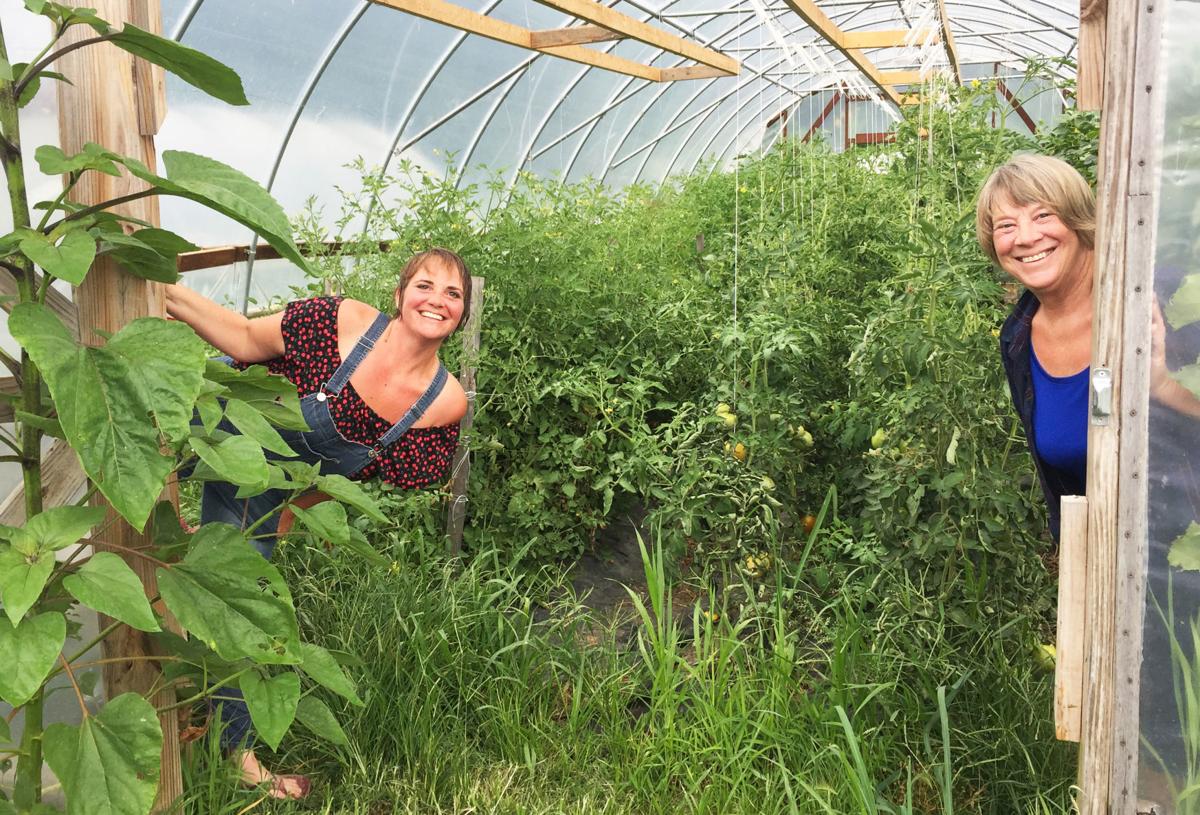 Kristy, left, and Linda Theilen show off their greenhouse last week at Theilen Produce Gardens. The gardens and farm land have been in the family name for more than 160 years. 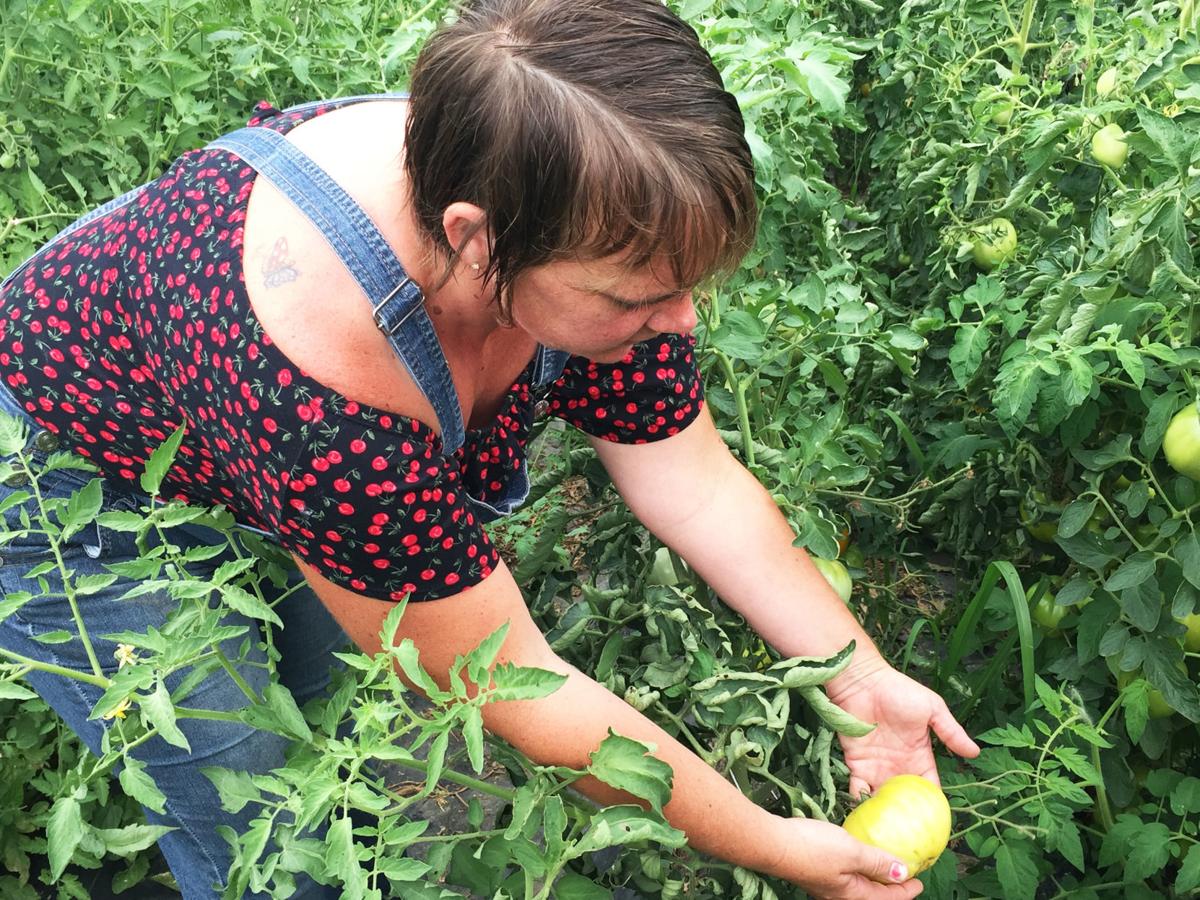 Kristy Theilen picks a tomato out of her greenhouse last week at Theilen Produce Gardens. Kristy returned from Arizona to Schuyler in 2013 to help run the farm and garden alongside her mother, Linda. 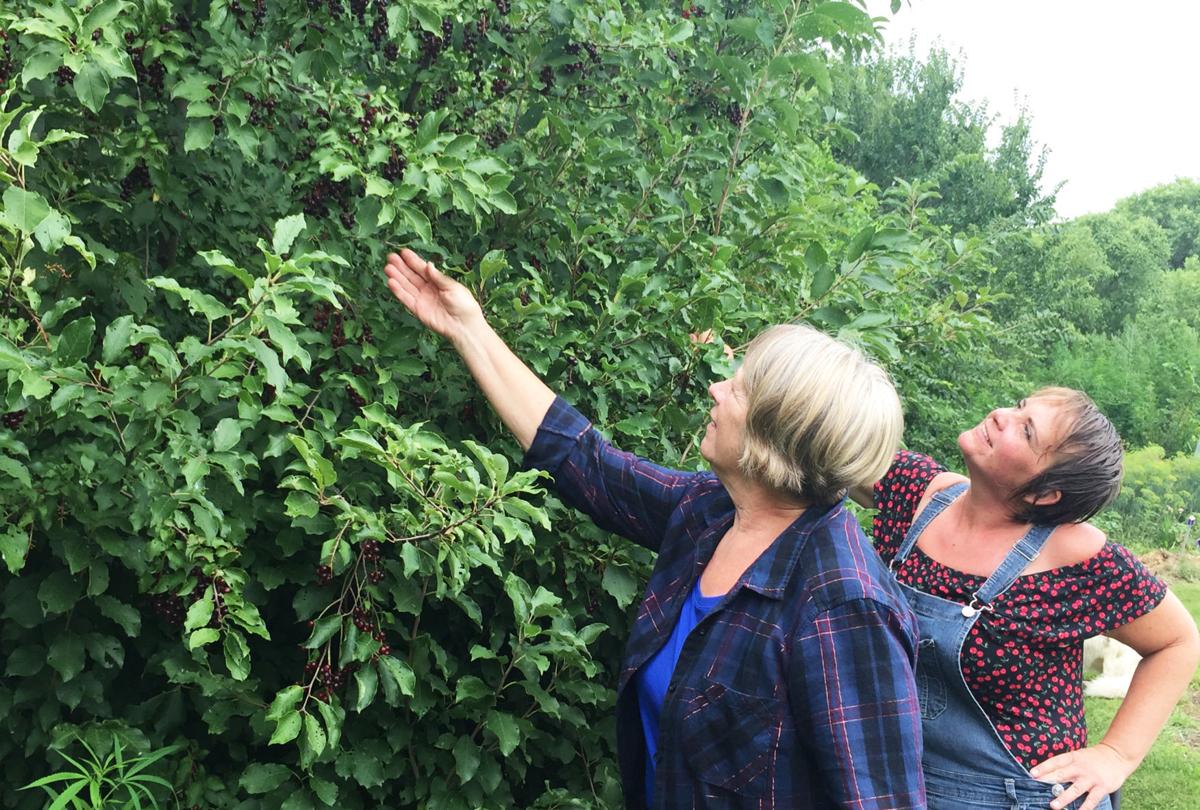 Linda, left, and Kristy Theilen look at the latest crop of cherries from their trees last week at the Theilen Produce Garden. Cherries are among the many crops grown at the garden, which includes tomatoes, zucchini, peppers and lettuce.

Linda Theilen was born on the property she now owns, which doesn’t seem like a remarkable feat until one learns about the history behind the land she and her daughter call home.

In the 1850s, Nebraska was an unorganized territory between the Missouri River and the organized Western territories. During this time, a group of people from Chicago crossed through what would eventually be Nebraska on their way to California to drop off cattle. While moving through the territory, they saw potential in a plot of land in Colfax County from which they would ultimately start a farming operation.

“(My) relatives came here, decided to go to California and then came back with them (the animals) and settled in the area,” Linda said.

Thus, the Theilen Produce Garden was born, although, in the beginning, it sold more than just grain and crops. There were chickens, goats and pigs, all grown to top specifications. For more than 140 years, the farm grew its livestock, but due to the inherent difficulty regarding keeping pigs and sheep fat and happy, Theilen decided to end their involvement in the livestock business in the late 1990s.

“We were big in hogs, and we sold a lot of hogs,” Linda said. “The price was killing us. The packers were making all the money and they can produce more at a lower cost than a small farmer can. We had to get out before we lost things.”

Now, the garden sells a wide variety of produce, ranging from tomatoes, lettuce, zucchini, broccoli and snap peas. It’s now in the hands of Linda’s daughter, Kristy Theilen, who returned to Schuyler in 2013 after 13 years away. When Kristy graduated from Schuyler Central High School in 2000, the last thing she wanted to do was return to the family farm. However, she returned in large part because she didn’t want to see the land go to waste.

“One of the things that pulled me back here is that we’re losing family farms,” Kristy said. “The amount of people that are still on family farms is decreasing. I think living on the same farm that my ancestors 150 years ago did (gives me) a better sense of the history of the area. I have three books of people telling (me) about their memories growing up on a farm.”

Linda still owns the land, but it’s Kristy who runs the show, serving as the face of the farm at the Schuyler Farmers Market and at the Omaha Farmers Market, not to mention the Community Supported Agriculture program she introduced. She brought in new plans to revitalize the soil on the property, allowing for a good soil ecosystem from which to grow top-tier produce.

“I think it’s important for the future of our land to have living soil,” Kristy said. “With biodynamics, it’s more intensive than organics. You don’t spray anything, it’s simply an understanding of improving the living soil so that you have an ecosystem living in your soil so that you have healthy soil. That prevents diseases in your plants and helps your plants resist predators and pests so that you don’t need to use chemicals.”

Kristy said she believes that in her six years back at her garden she's helped bolster the farm’s image in Schuyler and throughout Nebraska as a whole. Now, she’s thinking of expanding - to an extent. While she isn’t willing to build a bathroom and open a full-fledged coffee shop out of her shed, she has started plans to hold events at the farm, where people can relax with a cup of coffee or tea and listen to some good music under the Schuyler sky.

“The event nights that I have on the website, those things haven’t really started happening,” Kristy said. “They are things that I would like to have more of, to have more community involvement. I’d like to have a coffee shop atmosphere and to have events every month where people come and hang out and play music.”

Schuyler’s 150th-anniversary celebrations kicked off in style on Jan. 18 with a nod to the past and a look to the future.

Colfax County looking to catch up on Census workers

With the 2020 Census fast approaching, the Census Bureau is looking to increase the number of people working in Colfax County to facilitate it.

Schuyler wrestling hosted its home invitational on Saturday and saw one of its top wrestlers, senior Travis Marxsen, win a gold medal.

The first seven days of this session consisted of senators “dropping” bills to begin the hearing process and floor debate on carryover bills.

No. 7 Logan View too much for Schuyler

Schuyler wrestling faced one of the top teams in Class C in a road dual on Jan. 16 at No. 7 Logan View.

Kristy, left, and Linda Theilen show off their greenhouse last week at Theilen Produce Gardens. The gardens and farm land have been in the family name for more than 160 years.

Kristy Theilen picks a tomato out of her greenhouse last week at Theilen Produce Gardens. Kristy returned from Arizona to Schuyler in 2013 to help run the farm and garden alongside her mother, Linda.

Linda, left, and Kristy Theilen look at the latest crop of cherries from their trees last week at the Theilen Produce Garden. Cherries are among the many crops grown at the garden, which includes tomatoes, zucchini, peppers and lettuce.