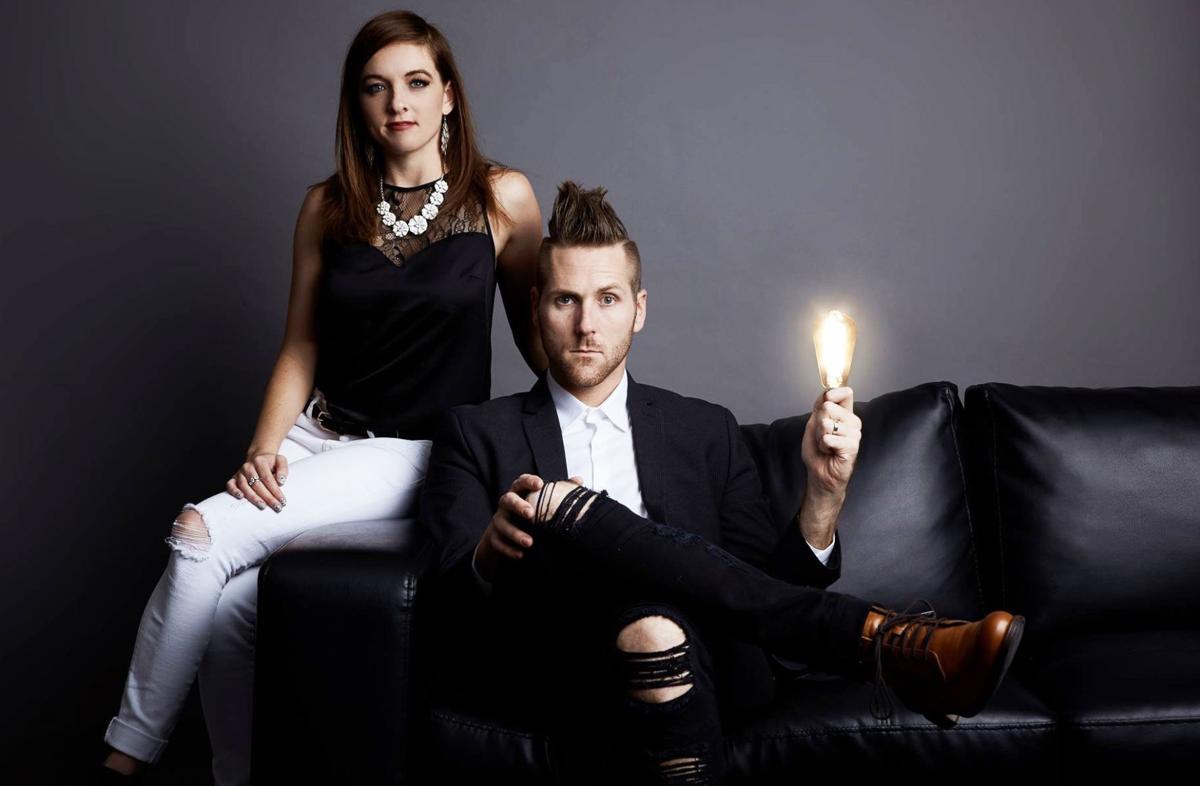 Bryan Drake, right, and his wife, Karla, will bring their brand of Christian-inspired illusions Sept. 4 to Columbus, with help from First United Methodist Church's youth program. 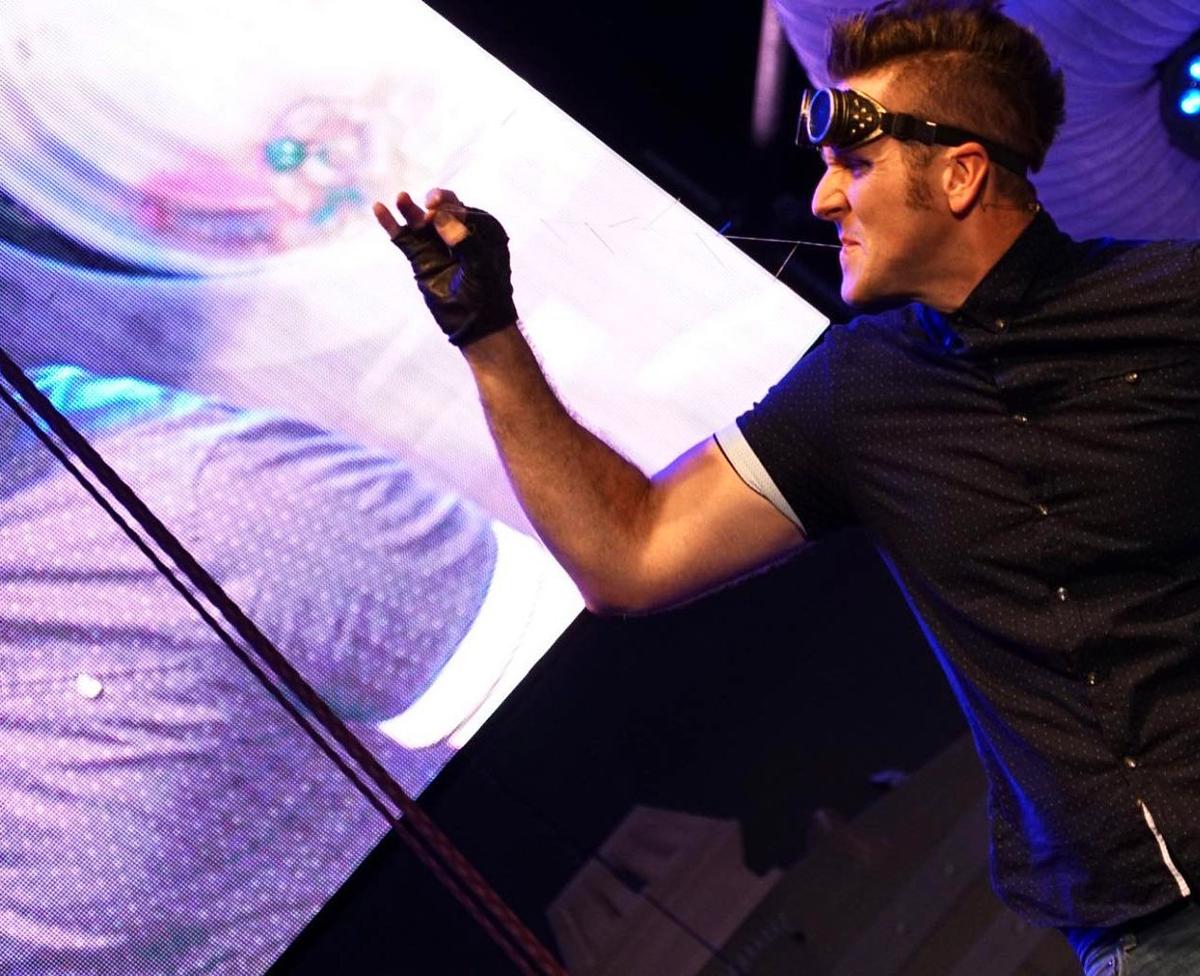 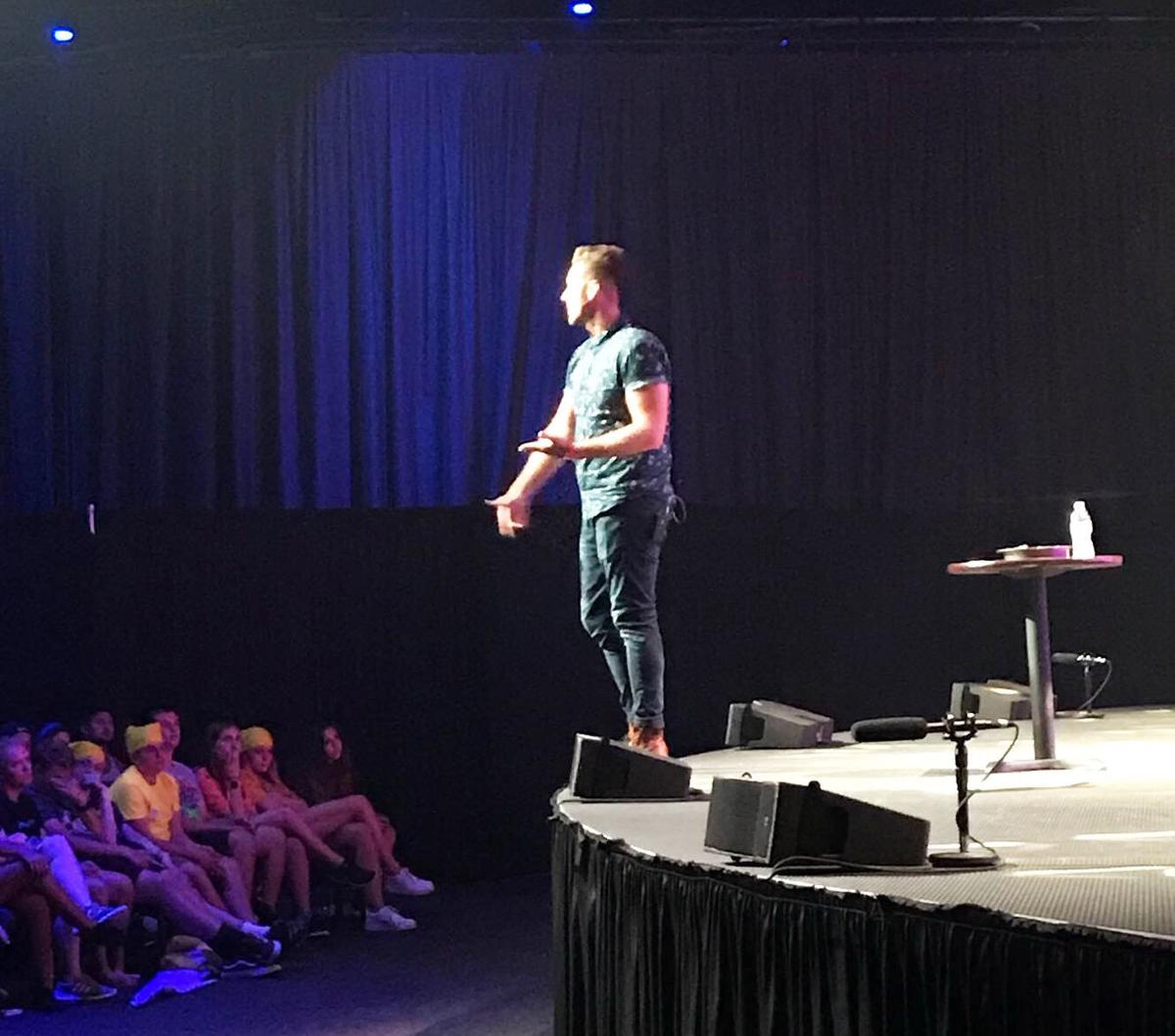 Illusionist Bryan Drake speaks to an audience at a recent performance. He will bring his art Sept. 4 to Columbus for a performance sponsored by First United Methodist Church's youth program.

Sarah Borgman had been trying for some time to lure someone to Columbus for an event that the entire family could enjoy.

In her role as youth director at First United Methodist Church, she had tossed around various ideas, including musical performers, before one day, she found a postcard sitting on her desk.

“I decided to check it out,” Borgman said. “Our program director, her and I got together here and we’re like, ‘Let’s do this.’”

That postcard came from the publicist of Bryan Drake, an illusionist who has performed across the United States over the past 12 years. Eventually, the two got in touch and managed to land Drake’s services for the night of Sept. 4 (at 7 p.m.) in the Nantkes Performing Arts Auditorium at Columbus Middle School.

According to Drake’s website, he is not just an illusionist, but also a mentalist and a motivational speaker. Most importantly, he is a Christian illusionist, which made him an obvious fit for the FUMC youth group.

“He’s very well known for bringing Scripture into his illusions,” Borgman said. “The Gospel and Scripture are woven into every illusion he performs.”

Drake refers to himself as an evangelist, as well, and that evangelism is on display in his work. He uses an example from his work to illustrate how his faith and his work are intertwined in the show.

“If I tell someone to think of a name, the only way people are impressed is if it’s the right answer,” Drake said. “There are infinite wrong names that it could have been, but there’s only one right answer. It ties into a verse Jesus talks about, especially John 14:6, which talks about, ‘I am the way, the truth and the light.’ One of the lies we tell ourselves on a daily basis is that we can do whatever with whoever however we want and it’s fine because we all get to the same place. But, Jesus makes very specific claims that go against conventional knowledge.”

Drake will perform a variety of different stunts and illusions and he changes up his show every year. It's not just to keep it fresh and provide a unique experience for the audience, but also to put together the very best show that he and his wife, Karla, can.

“We have enough material for three separate shows,” Drake said. “We’re always constantly developing new material, so we like to keep that together. That’s where Karla really comes in; she develops a lot of the routines that we do and really works them out.”

Drake and his wife are self-taught and everything within the show has been honed through years of practice. The vision is simple: Imagine just what the act will look like after it has been completed, and go from there.

“The idea is, ‘OK, that’s the end result. Let’s work backward; how do we get there without stabbing yourself in the hand?’” Drake said. “You chisel away until you build that routine.”

Both Drake and Borgman have different ideas for how they envision next Wednesday night to proceed. For the performer, it’s all about leaving the audience speechless.

“Because our focus is evangelism first, we never want to water down the art that we do,” Drake said. “We believe strongly that you should do everything to excellence, so we want to do the very best show where people walk away and go, ‘That was the craziest experience I’ve ever had,’ but knowing that it is a vehicle strictly to get to the Gospel.”

Borgman just wants to see the community come out and have a fun evening. She would love to have 500 people come out, come together and do something that she feels has been missing from the Columbus scene for far too long.

“The community hasn’t had an event like this in a long time,” Borgman said. “This is more of an outside event to bring in and an opportunity for people to come together, meet each other, be entertained and also at the same time, experience Scripture opened up to them in a way that they have never thought before."

Shrine Circus coming back to Columbus

The Pawnee Shrine Club will host its annual circus March 11 at the Platte County Ag Park, promising an exciting show with thrills and spills f…

Bullied at school for his dwarfism, 9-year-old Quaden Bayles sobs uncontrollably in the back of his mother's car — saying to the camera: "Give me a knife, I want to kill myself."

Harry is still permitted to use his royal titles — Sir or His Royal Highness — for a few more weeks, but has agreed to give up the descriptors when he officially steps back from the family on March 31.

MIAMI (AP) — Grammy award-winning singer Pharrell may have been fired from three different McDonald's as a teen, but that didn't stop him from opening what has become one of the hottest restaurants in Miami.

It might be somewhat difficult to find the passion for music in Tim Tarnick’s appearance. By day, he is a loan officer at Columbus Bank and Tr…

Kids shine as Broadway's 'To Kill a Mockingbird' goes big

NEW YORK (AP) — The cast of “To Kill a Mockingbird” ditched its somber Broadway home Wednesday for the cavernous Madison Square Garden, performing the play for 18,000 school kids in an electric one-time-only performance that one actor called “primal.”

The top 10 movies on the iTunes Store

WASHINGTON (AP) — Melania Trump on Monday cited the influence of “Achy Breaky Heart” singer Billy Ray Cyrus as she asked spouses of the nation's governors to address cyberassault in their states.

Our movies podcast, '... Just to be Nominated' looks forward to the films coming out in 2020

Want some insider info on movies worth looking forward to this year? Our podcast ... Just to be Nominated, has you covered!

Bryan Drake, right, and his wife, Karla, will bring their brand of Christian-inspired illusions Sept. 4 to Columbus, with help from First United Methodist Church's youth program.

Illusionist Bryan Drake speaks to an audience at a recent performance. He will bring his art Sept. 4 to Columbus for a performance sponsored by First United Methodist Church's youth program.