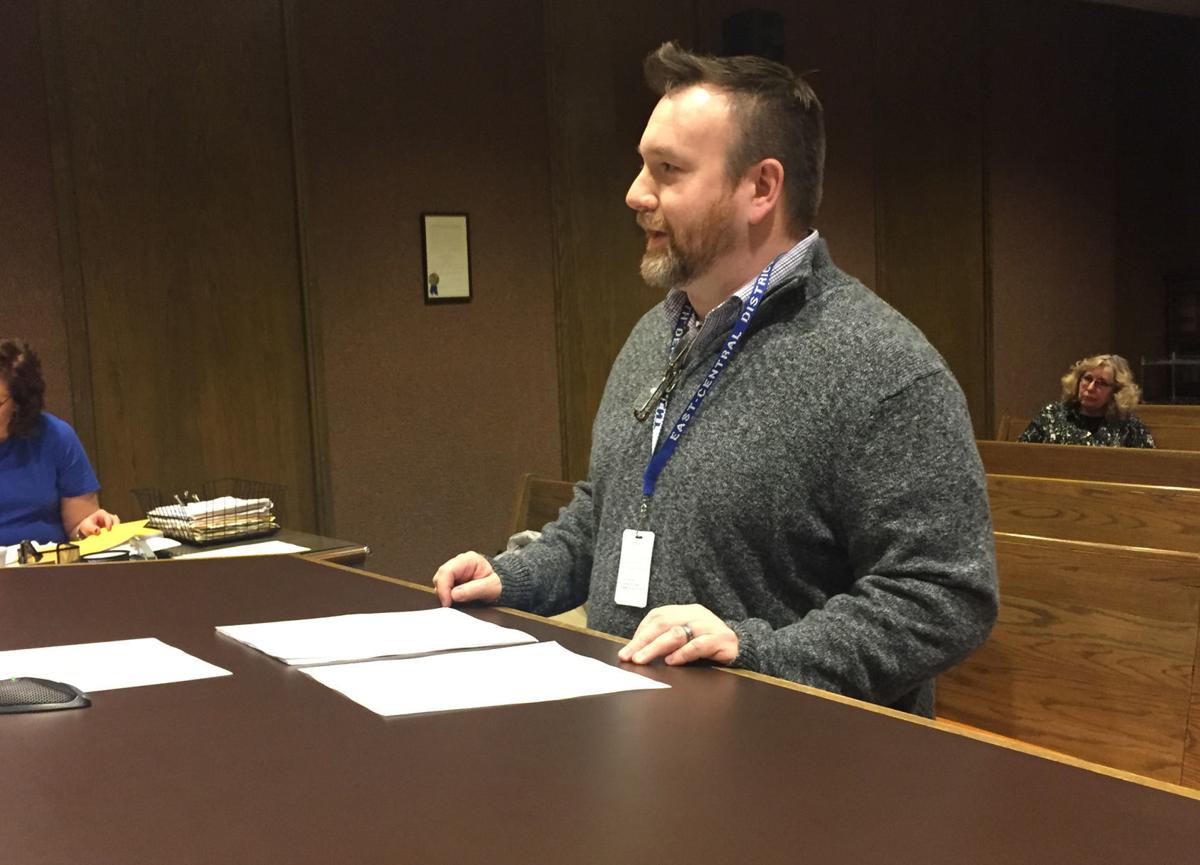 Chuck Sepers, the chief public health officer for the East Central District Health Department, speaks Tuesday to the Platte County Board of Supervisors on public health issues during the latter part of 2019, including the prominence of this year's strain of flu and the department's many public health programs. 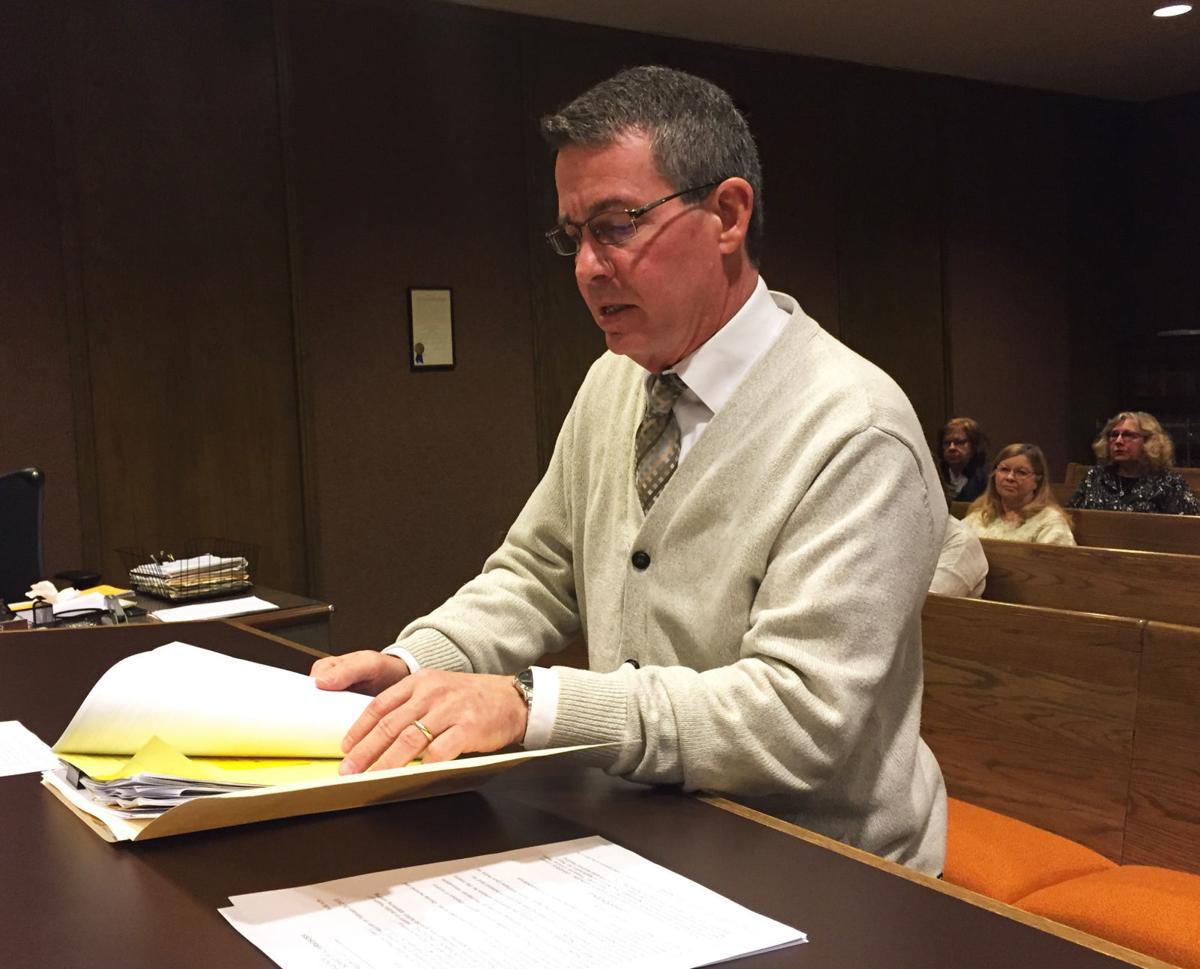 Platte County Attorney Carl Hart shuffles through documents Tuesday during his appearance before the Platte County Board of Supervisors. Hart was asking for the board to approve the appointment of a new deputy county attorney to replace Elizabeth Lay, who resigned last month.

The East Central District Health Department has begun preparations to quell the risk of COVID-19’s potential spread through its coverage area.

ECDHD Chief Public Health Officer Chuck Sepers said Tuesday at the Platte County Board of Supervisors meeting that the overall risk of the coronavirus remains at “a 3 or a 4” out of 10, in comparison with the flu, which still remains at a 5 or a 6 as winter changes over into spring. But, Sepers acknowledged he is well aware of the illness’s vast spread throughout the United States, with 105 different cases popping up in several different states, along with multiple deaths.

“If you look at the case breakout, it’s really high,” Sepers said. “What we’re starting to see, though, is cases popping up nationwide. What we’re safely saying at the CDC and DHHS and locally, is that we have really good evidence for community spread. Community spread simply means that this is cropping up in ways that we can’t specifically track to a travel location.”

No cases have been reported in Nebraska or Platte County as of Tuesday night, but ECDHD is taking no risks, opening up an operations center in order to track the spread of the virus if it does reach Platte County. The facility allows them to track whether or not the county is at risk while developing procedures to prevent a widespread outbreak.

“The various activities that we’ve been doing have been reaching out to various (local) entities,” Sepers said. “We’re working very closely with our health care partners to make sure that they have the latest information from the CDC and DHHS.”

They have reached out to various sectors within their region, including health care institutions, schools and city and county government in order to inform them of the potential risk. Sepers said he wants people to get good, accurate information in order to protect themselves from the vastly spreading disease.

“(We’re) really getting the information that folks need to have to be safe at this moment,” Sepers said. “We’re taking active measures to monitor this situation very closely.”

ECDHD did training over the weekend in order to develop a protocol for their employees in case the find potential symptoms of the virus. The protocol will allow for people to be screened and routed through their system before being sent to a local area hospital for treatment.

“We used that protocol and we sent that out to the four county hospitals,” Sepers said. “They can adapt our protocol to something that could work well for them.”

Despite the potential risk, there isn’t any sense of panic on the part of ECDHD. They are currently preparing potential public service announcements that will educate people on handwashing and making sure that they are doing whatever it takes to prevent the spread of COVID-19.

“We’re going to do a pretty aggressive handwashing campaign,” Sepers said. “These are all precautionary measures. We’re not hitting the panic button. It’s not time for people to run for the hills, but we’re bringing maximum effort and we’re really treating this as if it were a flood or some other large scale county event.”

In other board happenings:

*The board approved the appointment of Darin Jay Knepper as a new deputy county attorney, replacing Elizabeth Lay, who resigned last month. Knepper impressed Platte County Attorney Carl Hart, Jr. with his skill and military background, finding him to be the right replacement for Lay.

“He is outstanding,” Hart said. “He called me this morning, visited with his family, and he stands ready to accept an offer of employment here.”

St. Anthony kids pay it forward: Cards sent to those in coronavirus quarantine

When students at Columbus’ St. Anthony’s Home and School heard about the people on a cruise ship who were stuck in a coronavirus quarantine in…

Chuck Sepers, the chief public health officer for the East Central District Health Department, speaks Tuesday to the Platte County Board of Supervisors on public health issues during the latter part of 2019, including the prominence of this year's strain of flu and the department's many public health programs.

Platte County Attorney Carl Hart shuffles through documents Tuesday during his appearance before the Platte County Board of Supervisors. Hart was asking for the board to approve the appointment of a new deputy county attorney to replace Elizabeth Lay, who resigned last month.