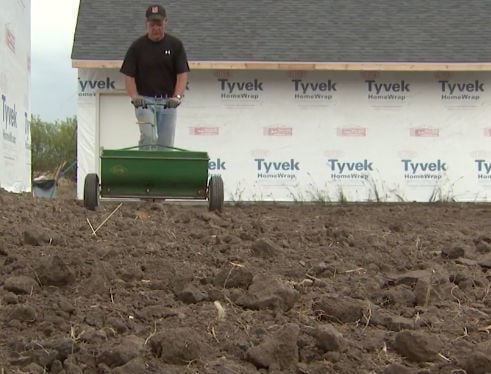 One of the benefits of dormant seeding is being able to prepare the soil and lay down seed during the dry late fall weeks rather than trying to time work during the small window between frozen ground and soaking spring rains. 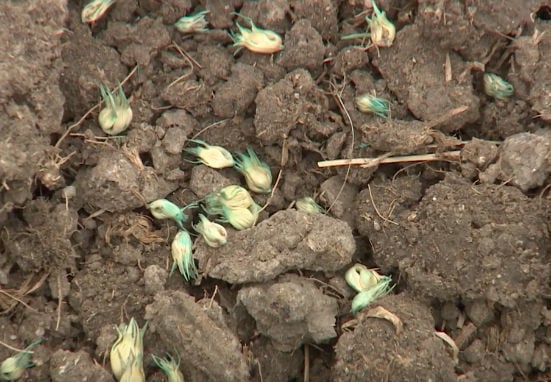 Traditionally, we think of seeding lawns in either spring (April-May) or fall (August-September). But increasingly, turf specialists are recommending a new option -- dormant seeding.

With this method, the area is prepared in fall but the seed is not distributed until after the growing season has ended. Seed remains in place but does not begin to grow until soil temperatures are warm enough for germination in mid-April.

Dormant seeding has several benefits. First, soil preparation can be done at your leisure during dry fall conditions. There’s no rush to get the work done in a short window of time in spring between frozen soil and wet soil. Dormant seeded turf grows well and fills in during cool spring weather, preventing much of the potential invasion by weeds. Finally, plants have more time to develop vigor and hardiness before hot summer conditions arrive, making them more able to tolerate summer stresses.

The actual process of seedbed preparation is the same as other times of the year, but dormant seeding is most effective when soil preparation, such as core aeration, power-raking, tilling or some other form of cultivation is done in fall.

Simply broadcasting seed and allowing it to work into the soil naturally through frost-heaving might be effective, but having soil preparation done first to improve seed-soil contact is important for successful dormant- seeding.

Prepare small areas by hand raking to remove excess dead top growth and loosen the soil surface. The best technique for preparing larger areas is aerating. Aeration opens up the soil and provides a good surface for seed germination. Seeds that fall into the aeration holes will germinate and grow well; there is no need to topdress or fill in the holes before seeding.

Power raking can also be used to prepare the site but is more damaging to existing turf. The only benefit of power raking over aeration is to reduce excess thatch, if more than a half-inch thatch layer is present. If power raking is used, go over the turf lightly only deep enough to penetrate the top quarter inch of soil.

Once seedbed preparation is done, dormant seeding should ideally take place from mid-December through mid-February. Soil temperatures must be 40 degrees F or below to ensure seeds will not germinate. Since the seed needs to have good soil contact, don’t apply seed over snow. Dormant seeding should be done no later than March 15.

The amount of seed applied when overseeding into a thin lawn is usually half the amount used for a new seeding. Kentucky bluegrass should be applied at 1-2 lbs. per 1,000 sq.ft. and tall fescue at 3-4 lbs. of seed per 1,000 sq.ft.

When working with small amounts of seed, mix sawdust, dry sand or any other suitable material with the seed to aid in obtaining uniform coverage.

Instead, wait until mid-April and the first week of May to apply. Several days of soil temperatures 55 degrees F or above are required for crabgrass and foxtail seeds to germinate. Be sure the pre-emergent herbicide is in place before that time. Monitor your local soil temperature at Nebraska Extension’s Hort Update, http://hortupdate.unl.edu.

For new seedings, use the lower recommended rate and repeat the application one month later.

Pre-emergent herbicide is usually combined with a starter fertilizer for new seedings. A combination application made between mid-April and the first week of May is a good way to provide fertility and control weeds at the same time.

Don’t rely solely on spring rain for germination of your new seeding. Begin watering the seeds 2 to 4 times per day in late April to ensure good germination. Base your watering schedule on weather conditions and how fast the soil dries. Water frequently enough to keep the top half inch to 1 inch of soil moist, but avoid over-watering and saturating the area.

One risk involved with dormant seeding is warm winter and early spring temperatures. If conditions cause seed to germinate and are followed by a cold period, seedlings may be killed. Continuous snow cover provides the best protection for seeds.

Monitor seeded areas in mid-spring for the need to do additional overseeding, but give the seeds plenty of time to germinate.

Sarah Browning is an extension educator with Nebraska Extension. To ask a question or reach her, call 402-441-7180 or write to her at sarah.browning@unl.edu or 444 Cherrycreek Road, Lincoln, NE 68528.

A trio of wasp species has been introduced in the area to battle the emerald ash borer. But don't worry: They don't sting.

Our refrigerators see a lot of turnover, which can make them one of the most difficult places in the house to organize. If you’ve ever opened the door to a funky smelling head of broccoli, you also know it’s one of the most important spots to keep tidy. An organized refrigerator doesn’t just make cooking a breeze—it can also cut down on food waste and grocery costs. Here are 4 gadgets to help you hack your fridge.

Amazon shoppers like these earbuds better than Apple AirPods

The best part? They'll actually stay in your ears.

3 homemade air fresheners you can make in minutes

Whether you love DIY projects or just need to freshen up a stale smelling space, these simple homemade air fresheners will leave your home smelling better than ever. They also don’t contain any of the harsh chemicals often found in commercial air fresheners, and you can make them in minutes.

Buying Guide: This traveling slow cooker is perfect for potlucks

You're about to rule game day with this tailgating companion. 🏈⚾⚽

Earth Talk: How can fungi help clean up contaminated soils?

While fungi primarily consume biological matter (like dead wood), their enzymes can also break down a wide array of man-made compounds.

This year the National Garden Bureau is promoting iris as their bulb of the year. Irises are among the easiest of perennials to grow from bulbs, roots or rhizomes.

Sarah Browning: Onions can get an early start in the garden

Planting onions from small bulbs or "sets" is not the best way to grow large onions for storage. Plants grown from sets often begin blooming in mid-summer and stubbornly refuse to stop. Once that happens, onion bulbs don't increase much in size.

Is your laundry area in need of a facelift? A good place to start is replacing the old fiberglass wash sink with a stylish new laundry tub. It seems the utilitarian sink designed to collect water from the washing machine does a lot more than that while accumulating stains and scars from years of painting and gardening chores.

Amazon's new WiFi router is quick and easy to set up

Start streaming, buffering, and gaming without the headache.

One of the benefits of dormant seeding is being able to prepare the soil and lay down seed during the dry late fall weeks rather than trying to time work during the small window between frozen ground and soaking spring rains.