A feeling of family: Hash vital part of Scotus community
View Comments
Share this
{{featured_button_text}}
1 of 2 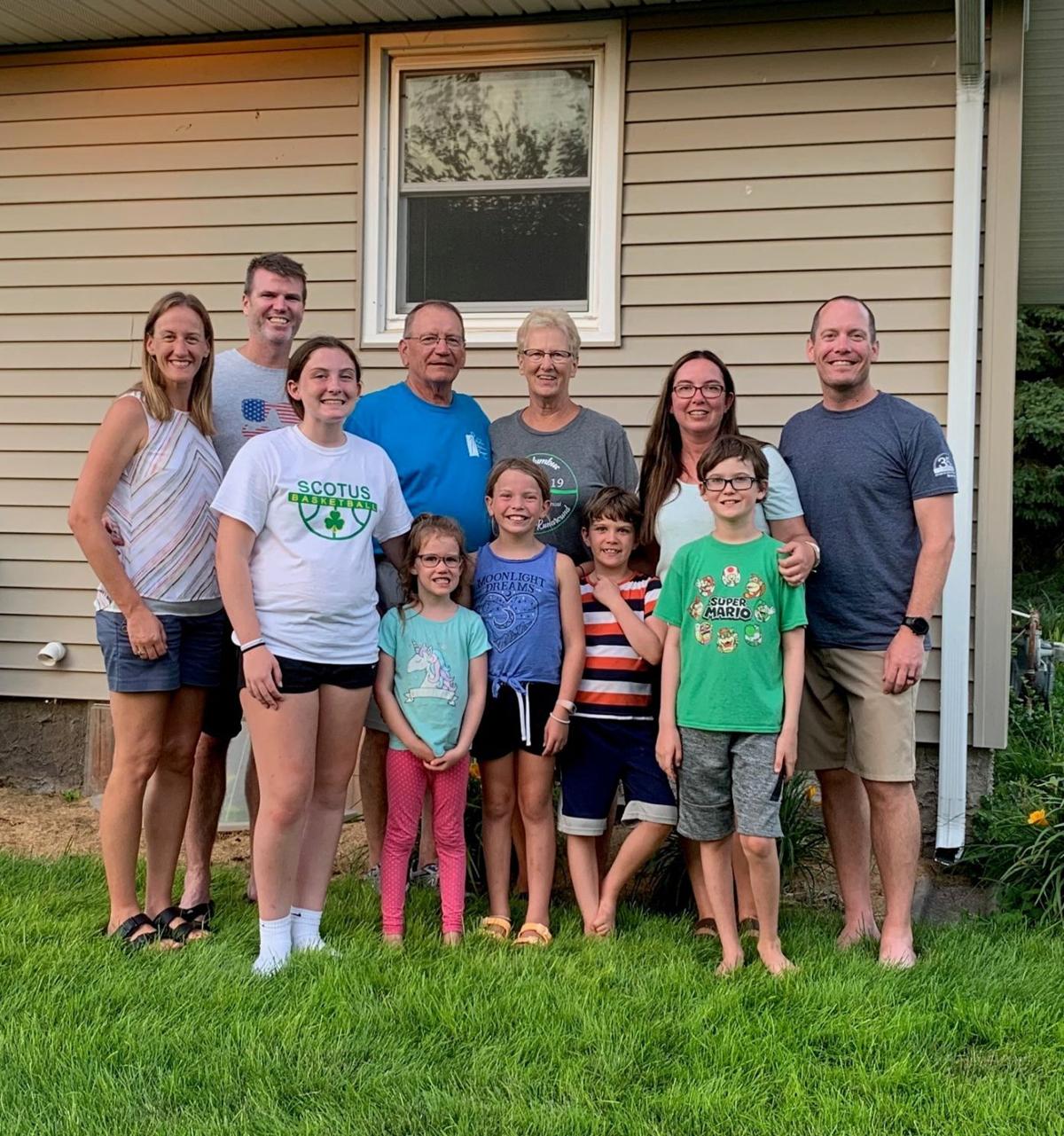 Annette Hash is pictured in the middle with her family. In addition to supporting Scotus athletics and activities, Hash also enjoys spending time with her children and grandchildren. 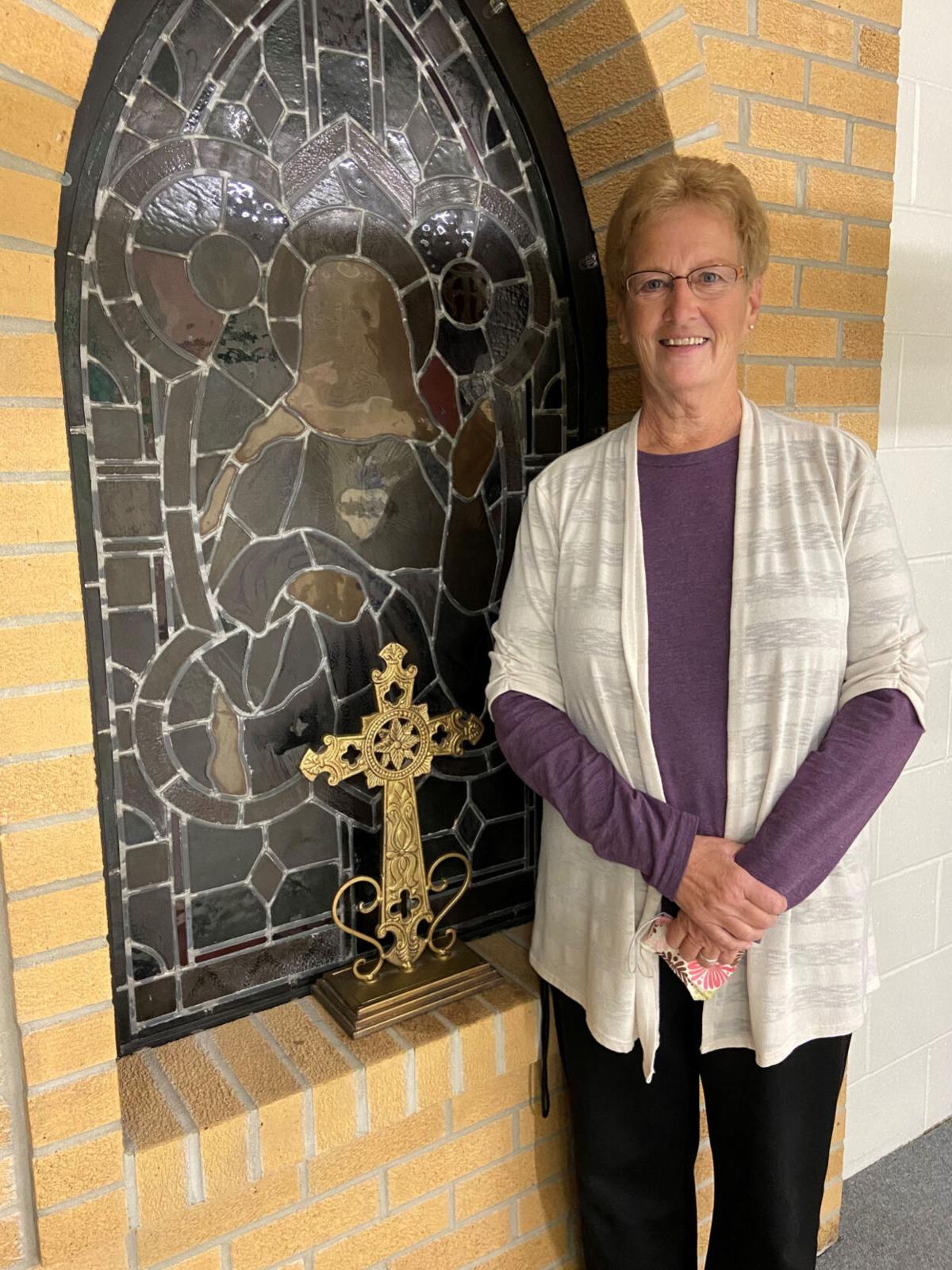 Annette Hash of Columbus is pictured in the chapel of Scotus Central Catholic.

The longest-serving employee at the school, Hash is known for going above and beyond her position with the activities office, said Scotus Development Director John Schueth.

“She’s always there. She knows people, she supports the programs, she has enthusiasm and she has a real love for the school,” Schueth said.

Hash is no stranger to the rural community, as she grew up in St. Edward.

“I loved living in a small town,” Hash said. “I was the middle of six children and you just rode your bikes, you walked, just whatever. It was just a great place to grow up.”

Hash graduated from St. Edward High School in 1970 and, the following November, married her husband Terry. She met Terry, who grew up in Genoa, in her junior year of high school.

As her husband was enlisted in the Navy, the couple moved to Portsmouth, Virginia, for a year before he was shipped to Spain.

“I came back and lived with my parents and worked at a country school as a teacher’s aide,” Hash recalled. “He got out and went to the University of Nebraska, and I started working in Lincoln.”

They had their first child, Erik, while living in Lincoln. After her husband graduated from college in 1973 with a degree in animal science, the family moved to Kearney then to Kalona, Iowa, where the couple had their second child, Amy.

“I remember (we) had gone over to Iowa City – my husband was interviewing over there – when we left the hotel, they said ‘Be careful because when you’re heading to Kalona, you’ll see horses and buggies’ and, well, we did,” Hash said, laughing.

According to Hash, they lived on a large chicken farm while Terry worked for a livestock equipment employer.

“It was a great place to live and we had really good friends,” Hash said.

In March 1981, the family moved to Columbus, where Hash discovered a second family – Scotus Central Catholic.

Hash focused on raising her children before starting a part-time job at Scotus in the fall of 1984. She recounts her first job was being involved in conducting a census of the Catholic schools.

“They were trying to find… the census of all the… Catholic elementary schools to get a count of how many students would be coming to Scotus in the next 10 to 15 years,” she noted.

Her job grew into a full-time position and, throughout the years, has worked in every office at Scotus.

For over 25 years, Hash had been heavily involved in organizing the annual Scotus Gala, which is the school’s largest fundraiser of the year.

“It was a big moneymaker, so it was a lot of hours of work,” Hash said. “It was a lot of fun because it was a great way to meet other chairpeople, the parents and you really got to know them on a different basis rather than just as a parent of a student.”

Hash returned to a part-time position in 2015, though she still volunteers with the Gala. She now assists the activities and development offices.

“In activities and athletics… there’s no day ever the same. I think that’s probably what I enjoy most,” Hash said, adding that even a rainy day can cause a chain reaction of games being canceled, resulting in her making phone calls to various officials and members of the media.

Her longevity with Scotus makes her an important piece of the puzzle.

“First of all, Annette’s been here quite some time. I think she started back in the early 80s, so she knows everybody. That’s really one of the assets she brings to Scotus every day,” Schueth said. “She knows all of our families, she knows people in the Columbus community... If you run a name by her, she recognizes it and knows how to spell it, even the more difficult Columbus names.”

To Hash, getting to know the students and their families is an enjoyable part of the job.

Schueth noted that Hash is always willing to lend a hand. For example, right before being interviewed by the Telegram, Hash had stopped by his office to help do mailing while substituting in the front office for an hour.

“(She’s) always ready to pitch in, in any capacity,” he said.

Most notably, Hash can be seen at games and activities, supporting various programs and the students participating in them.

Whether an older employee or a newcomer, staff and faculty at Scotus can work in harmony, Hash noted.

“Every time someone interviews someone at Scotus, they always say family. I think that’s probably what I enjoy the most,” Hash said. “…It’s just a feeling of family there. Everyone seems to get along well and if someone is gone, I help cover for them… there’s always someone to step in and help you out if you need it.”

Hash’s children went to Scotus and now her oldest grandchild is in her second year at the school.

“When I went part-time in 2015… she said, ‘Grandma, you can’t retire, you have to stay until I get there,’” Hash recalled. “I said when she was little, ‘I will not be at Scotus when you get there, Ella.’ As it got closer, it was like, well I still really enjoy my job, I like part-time, I like (how) they’re very receptive to me.”

In 2003, Hash was given the Scotus Outstanding Service Award, which recognizes one person a year for contributions made to the school. Twelve years later, she was inducted into the Shamrock Hall of Fame as a boaster.

“That’s an example of the entire school community saying ‘hey, you deserve to be recognized for what you do for this place,’” Schueth said.

OUT IN THE COMMUNITY

Since moving to Columbus, Hash has been involved in the community as a whole in addition to Scotus.

She’s helped with the packet pick up for the Downtown Runaround, a running event in Columbus, with her neighbor Lynne Trouba, for many years.

“I remember we walked in and we had to wait in line for our packets and we walked up to the packet pick up and it was an old gentleman, sitting there and trying to find everything,” Hash said. “It wasn’t in very good order, I guess. So we made the comment, ‘We can do this a lot better’ and the next year, we were in charge of packet pick up.”

In her free time, Hash enjoys reading, crafts and traveling. Erik and his wife and two children live in Columbus while Amy, her husband and three children live in Sarasota, Florida. Hash enjoys spending time with her grandkids in town, as well as seeing the rest of the family in Florida at least a couple of times a year.

“As long as I’m healthy and still enjoy work, I’ll continue to work part-time,” Hash said. “Hopefully we’ll stay healthy and continue the way we are.”

A 37-year-long employee of Scotus Central Catholic, Annette Hash has worked in every office of the building. She's currently employed in the a…

Annette Hash is pictured in the middle with her family. In addition to supporting Scotus athletics and activities, Hash also enjoys spending time with her children and grandchildren.

Annette Hash of Columbus is pictured in the chapel of Scotus Central Catholic. 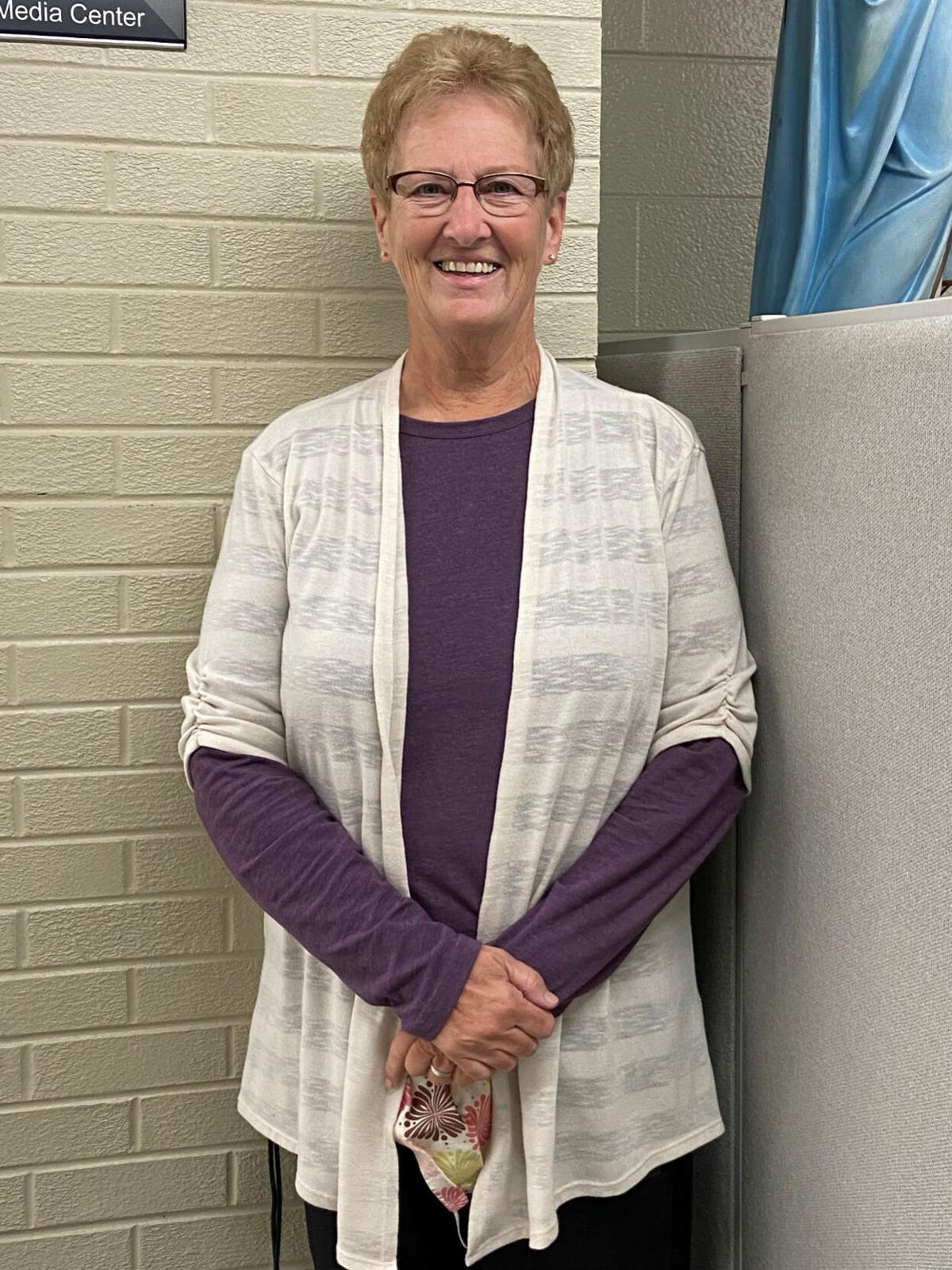 A 37-year-long employee of Scotus Central Catholic, Annette Hash has worked in every office of the building. She's currently employed in the activities office.