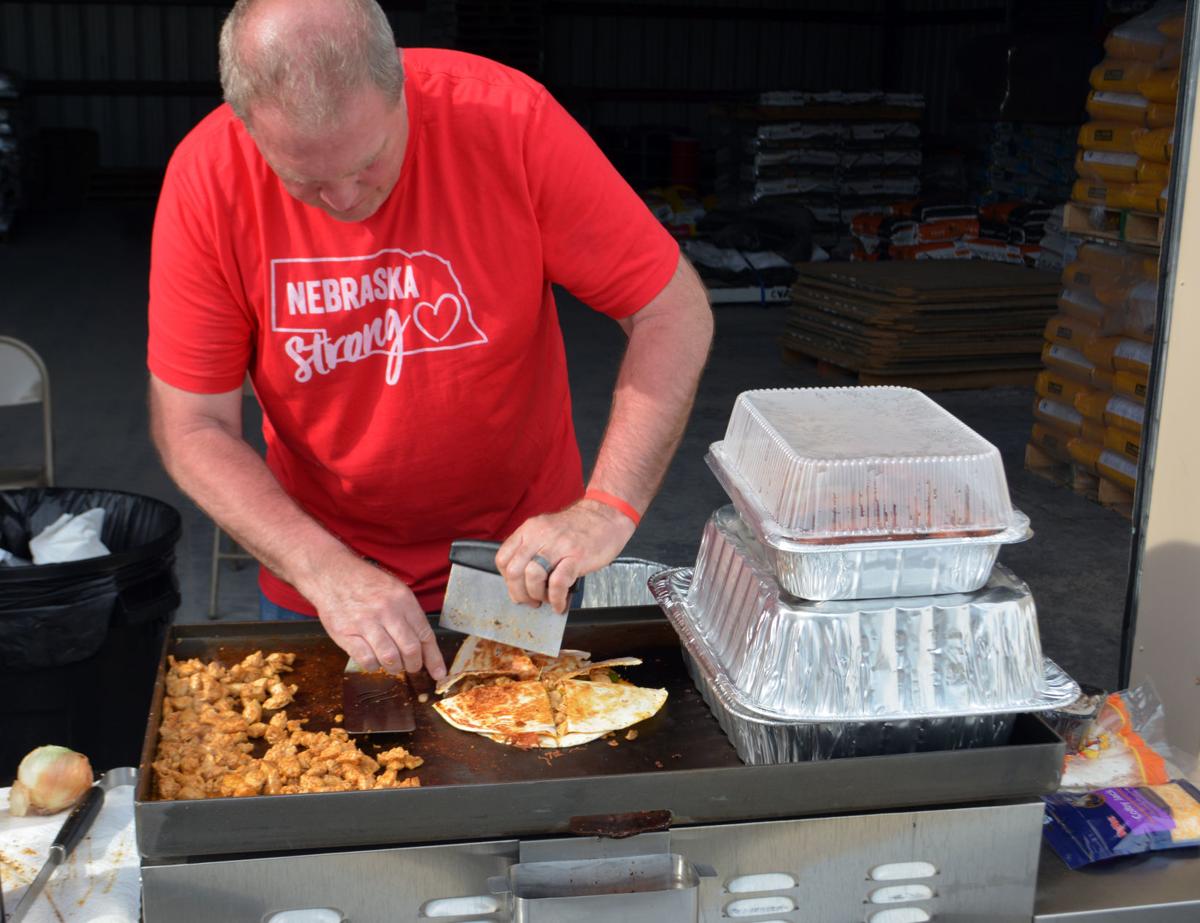 Scott Ahrenholtz, a technical sales representative for Verdesian Life Sciences, cuts a quesadilla into pieces on his grill Tuesday evening in the Central Valley Ag parking lot. Ahrenholtz and some of his colleagues spent the afternoon serving area producers affected by the severe March flooding. 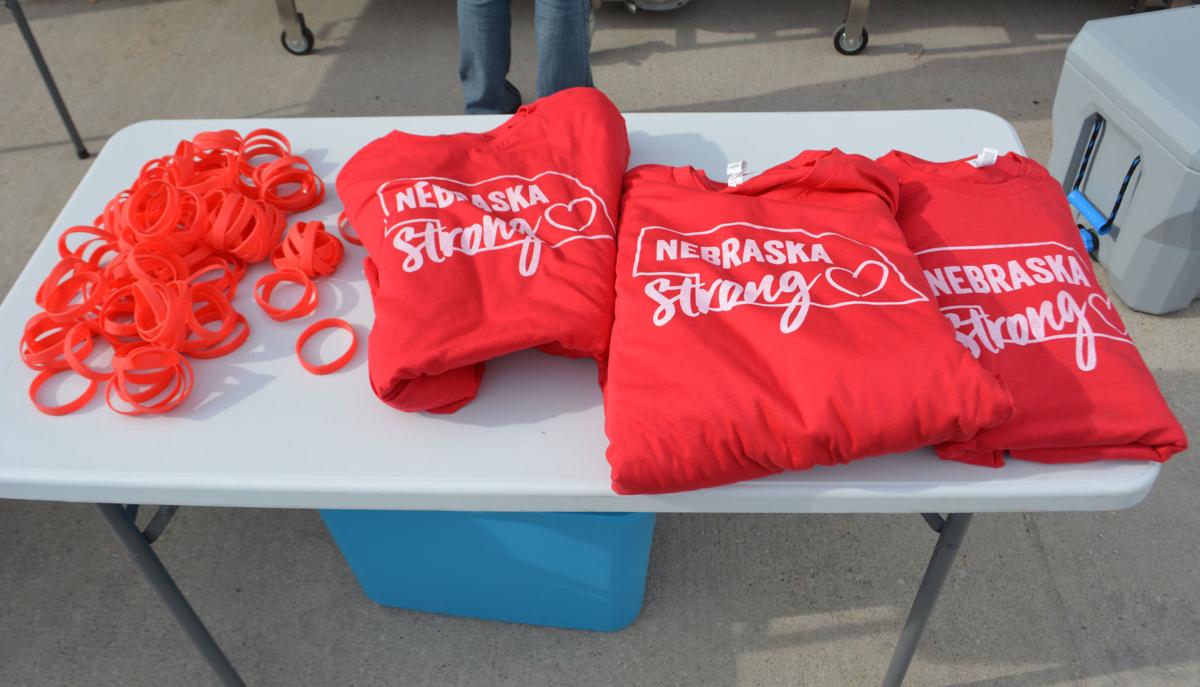 'Nebraska Strong' shirts and bracelets sit on a table Tuesday evening in the Central Valley Ag parking lot, which served as the site of a free dinner provided to area producers who were affected by the March natural disaster.

Deb Johnson has been immersed in the agriculture industry for the past 30 years through her work.

During that time frame, she said she has seen producers deal with some pretty difficult circumstances around the country. But nothing she has personally seen stacks up with the March flooding that placed approximately a million acres of Nebraska land underwater.

“It’s going to be an ongoing struggle because it will take years for that ground to get back to where it was,” said Johnson, a technical sales representative for the micronutrient company Verdesian Life Sciences. “On top of the low commodity prices, now they are forced to deal with all of this.”

Now, Johnson and some of her colleagues are trying to do their part to lessen the load for area producers by hosting more than a dozen meal outings in some of the communities most adversely affected by the natural disaster.

From 4-7 p.m. on Tuesday, Johnson and other Verdesian Life Sciences team members served burgers, brats, chips, cookies, quesadillas and drinks to area producers in the Central Valley Ag parking lot, 1362 Third Ave. In addition, there were ‘Nebraska Strong’ bracelets and T-shirts available for those in attendance. Prior to the event Tuesday, Johnson said she and her cohorts were prepared to serve up to 400 people.

Although she’s playing an important role in setting up the Platte County event, Johnson made it clear that she wasn’t the brainchild of the outing.

“I can’t take credit for it,” Johnson said. “Every week we do conference calls and I was telling them how I was dropping in my (sales) forecast because there was so much flooded land. And at first, I think they thought that maybe I was a rep who was just anxious and may not make my goal.”

Then the following Saturday, members of Verdesian’s corporate team in North Carolina saw the destruction on national news outlets and gave her a direct phone call.

“They called and kind of apologized and said they saw how big of a deal it was,” Johnson said. “They said that they wanted to help out.”

Over the course of about a week, Johnson and others will be hosting free meals in places like Fullerton, Genoa, St. Edward, Verdigre, Randolph, Pilger, West Point, Oakland and Tekamah. On Monday, the group made a pit stop in North Bend.

Scott Ahrenholtz, a technical sales representative for Verdesian in Iowa, noted that his state also received a fair amount of destruction.

“The western part of the state in the Missouri River bottom, there were some levees that were breached and there was a lot of towns and farm ground that were devastated,” Ahrenholtz said while manning a grill piled with quesadilla fixings.

He added that he was more than happy to make the trip to Nebraska to aid his colleagues and help provide people with a good meal and perhaps some elevated morale.

“The agricultural industry is a family – it’s close-knit,” he said. “We are all one family and when they are in need we are here to help.”

On Monday, April 22, the Verdesian group is making its way to Battle Creek. This is expected to be one of the largest dinners, with an estimated 400-700 people scheduled to be in attendance.

“Boy, in that area they just got slammed. It was really bad,” Johnson said. “… In a lot of places, there’s 3- to 4-feet of sand on top of that land. And what can you grow in sand?”

Johnson said that her company isn’t using this as an opportunity to push its products whatsoever, it’s just people coming together to help people. Tuesday’s turnout wasn’t as heavy as expected – Johnson said she believes the nice weather may have kept many farmers in their fields. But, there were people swinging by periodically through the afternoon, she added.

Those that did attend, though, undoubtedly left full and thankful.

“All we want to do is just our part,” Johnson said.

Residents of Columbus will notice several new developments popping up along 33rd Avenue and Highway 30, including a potential new stand-alone …

A Columbus nursing home recently announced that eight of its residents and two associates have tested positive for COVID-19.

One lucky 5-year-old girl received a special surprise Wednesday during her birthday parade: A visit from the Columbus Police and Fire departments.

Columbus High School senior Noaha Macario didn't have the easiest life growing up, but that never stopped him from trying to achieve great hei…

Scott Ahrenholtz, a technical sales representative for Verdesian Life Sciences, cuts a quesadilla into pieces on his grill Tuesday evening in the Central Valley Ag parking lot. Ahrenholtz and some of his colleagues spent the afternoon serving area producers affected by the severe March flooding.

'Nebraska Strong' shirts and bracelets sit on a table Tuesday evening in the Central Valley Ag parking lot, which served as the site of a free dinner provided to area producers who were affected by the March natural disaster.