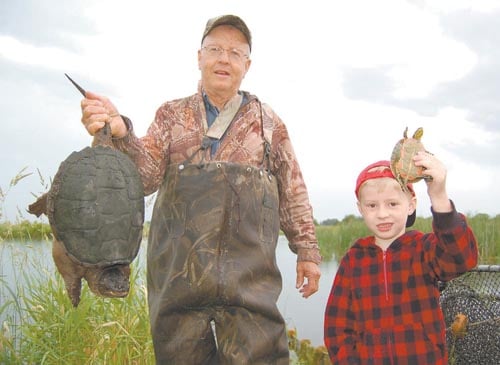 Turtle trapper Lee Rupp, showing a 15-pound snapping turtle, and his grandson, Colton, pictured with a common painted turtle, work together to trap painted turtles for use in the upcoming Monroe Fest Turtle Races to be held Saturday at Monroe Fest 2010. 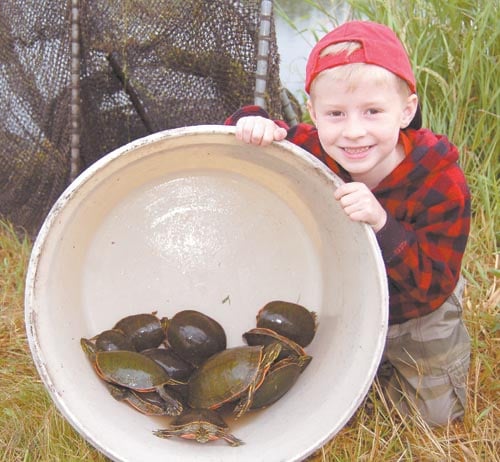 Colton Rupp, the son of Mark and Laura Rupp, shows some painted turtles. 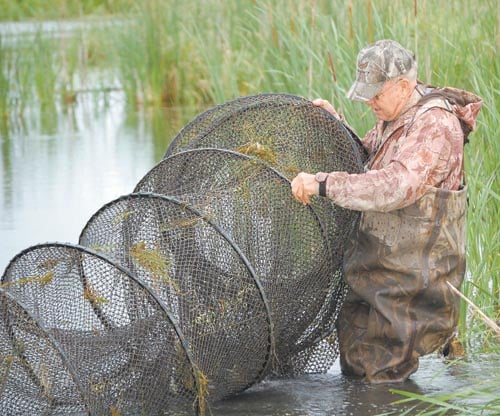 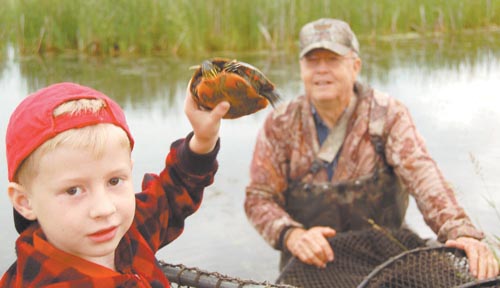 Colton Rupp, 6, holds up a catch at one of four ponds located on his grandfather’s property in rural Monroe Monday morning. 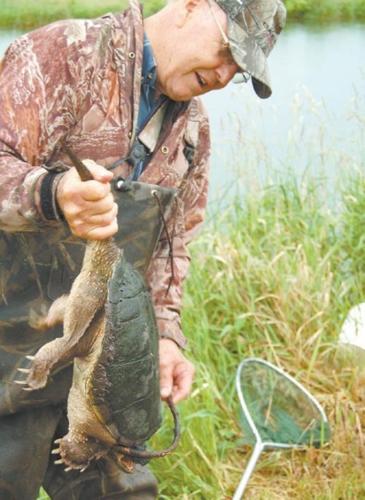 Lee Rupp shows the bite power of a 15-pound snapping turtle that he may have on display at the upcoming Monroe Fest Saturday. Rupp has been trapping painted turtles for area turtle race events for more than 30 years. 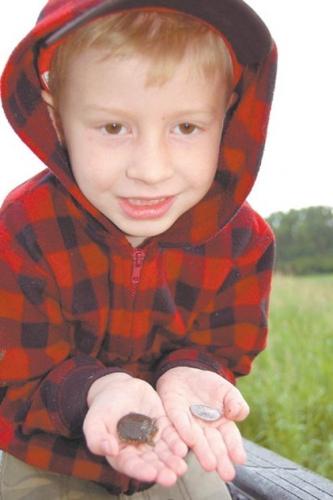 COLUMBUS — Life-long Platte County resident Lee Rupp has been trapping turtles for use in area turtle races for more than 30 years.

The veteran turtle wrangler has enjoyed his tag-along apprentice — grandson Colton Rupp, 6 — since the boy could walk alongside in the tall grass.

Asked what he wanted to be when he grew up, Colton said he “wants to work with turtles and bugs” like his grandfather.

The elder Rupp worked as a fisheries biologist with the Nebraska Game and Parks Commission from the early 1960s until 1982 when he was elected to the District 22 seat of the Nebraska Legislature.

“I first started trapping turtles for turtle races that were to be held for the Fourth of July celebration in Platte Center back in the early ’70s,” Rupp said. “Later, in the 1990s, Glur’s Tavern sponsored some turtle races for the Columbus Days celebrations, and the late ‘Geno’ Kneifel asked me to do some trapping for those events.”

Rupp said it was much easier to trap hundreds of turtles in just a few days back in those days than it is now.

Rupp’s current activities are accomplished with a 40-foot net and trap on loan to him from the game and parks commission. The net portion of the device acts as a barrier that directs the turtles into the trap as they move through their regular daily routines. The net and trap is of the type used to catch shallow water and/or spawning fish for sampling activities done by the game and parks personnel.

Rupp said permanent possession of a net of this type is illegal and his use of the net is limited to these specific events.

“The net is on loan from the Nebraska Game and Parks Commission,” Rupp said. The turtles collected for the races must be returned to the area ponds they come from.

Rupp said it is feasible that some of the turtles could be in the races year after year. He said the turtles are not marked to track them so there is no exact data on how many may have been raced before.

“The two biggest problems I have every year in collecting turtles are pond moss and muskrats,” Rupp said. “In early summer the moss in clear shallow water can get so thick it’s like a hay field in there. That makes it hard for the turtles to move around and often we catch nothing for several days.”

Rupp said the process is a passive capture that the turtles get into based on their own routine movements.

He said muskrats also are numerous these days because few people trap them anymore. He said most muskrats that wander into the traps chew their way out and often turtles in the trap find their way out of the holes created by the muskrats.

“One of the biggest reasons for doing this, besides the fact that it’s fun for the kids, is that it makes a good way for kids to reconnect with nature and wild things,” Rupp said. “With the non-stop computers, television and video games kids today aren’t getting enough exposure to the outdoors and wildlife.”

Rupp said snapping turtles and painted turtles are the most common turtles caught in his traps each year. The snapping turtles used in the races are placed in their own division and handled with care to avoid injuries to the children who participate.

“Painted turtles are harmless and contrary to popular belief I’ve never heard of any wild turtle passing on any diseases,” Rupp said. “There may be some disease in ‘pet store’ turtles but in the wild, sick turtles are not going to survive very long.”

Rupp said box turtles are terrestrial turtles not found near water and are protected by law so that no one should ever have them in possession even for a short time.

Rupp said he expects to have at least a few dozen turtles in time for the race. If more children enter than the number of turtles available, the races go into multiple heats until all the children have had a chance to race them.

Rupp served in the Legislature through 1988 and then took a position as a vice president of the University of Nebraska four-campus system.

He retired from that position in 1998 and currently farms and leases farm land in the Monroe area.

One of the hunters was flown to Lincoln because of his serious injuries.

Frequent visitors to the Pawnee Plunge in Columbus will notice fee changes for the 2023 season, the most notable being the addition of a non-swimmer daily admission fee.

To ring in Christmastime and celebrate the reason for the season, Columbus Area Vertical Voices will be back for its annual concert in December.

23rd Street reconstruction to start in 2023

With mitigation efforts by the Environmental Protection Agency wrapped up, reconstruction work on 23rd Street is scheduled to begin in 2023 in Columbus.

Injuries were reported in a Monday night car accident just north of Columbus.

The first thing people often notice about others is their smile. For Scotus Central Catholic senior Ava Cremers, helping people feel comfortable with their smiles is something she strives for.

Back in time for Christmas

With the Christmas story taking place 2000-plus years ago, it can be hard to truly envision what the circumstances of that night were like. To…

With Christmas and Thanksgiving creeping ever closer, many area businesses, organizations and groups have holiday festivities planned, from so…

Turtle trapper Lee Rupp, showing a 15-pound snapping turtle, and his grandson, Colton, pictured with a common painted turtle, work together to trap painted turtles for use in the upcoming Monroe Fest Turtle Races to be held Saturday at Monroe Fest 2010.

Colton Rupp, the son of Mark and Laura Rupp, shows some painted turtles.

Colton Rupp, 6, holds up a catch at one of four ponds located on his grandfather’s property in rural Monroe Monday morning.

Lee Rupp shows the bite power of a 15-pound snapping turtle that he may have on display at the upcoming Monroe Fest Saturday. Rupp has been trapping painted turtles for area turtle race events for more than 30 years.