Columbus resident John Peterson has been coming to Ag Park for the horse racing since moving to the town in 1990. He got hooked into attending the races thanks to relative.

"It's the atmosphere. Friday nights, they usually have big crowds and cheap beer so that was always a good draw," Peterson said. "I got a son-in-law who's a trainer, so he got me involved that way."

Peterson was one of hundreds in attendance Saturday to witness the final horse races at Ag Park. If the plan stays on track, the horse racing season will move to a 1-mile track at the Harrah's Casino project.

"I thought they would make a bigger deal about it with this being the last one," Peterson said. "I'm excited for the new mile track that's coming in on the west side of town."

The larger track is what Peterson is most looking forward to.

"It's a mile track. It's the only one around here," he said. "You're going to get better horses, more horses and bigger purses."

Mary Beiermann, a Columbus resident for about 40 years, said she was also excited on the possibilities that'll come with the new oval.

Saturday night was Beiermann's first race day she attended this summer. She said she normally tries to come once a year.

"It was the last night and I finally got somebody to come with me," Beiermann said.

Beiermann's daughter joined her at Ag Park as she was in town from Colorado. She described her emotions of being among the crowd for the final night of horse racing at Ag Park.

"It's bittersweet. I wish they still run here," Beiermann said. "I'm kind of anxious for the new track as well."

Dawn Lafromboise experienced her first horse racing season at Ag Park this year. She said her partner was the person who worked the gates at the track this season.

Before the Columbus horse racing season began, they were in Grand Island for four months. They're heading to Denver next.

Lafromboise said she was impressed with the crowd turnout. She said she's been to Turf Paradise in Phoenix when nobody was there.

"I'm glad to see there's a good turnout and there's still enough horse to do the races," Lafromboise said.

Columbus Exposition and Racing member Dan Clarey told The Telegram in May that construction on the race track were going to be started this summer. Clarey said the racing surface could be done in the fall with the other construction getting underway in 2023.

Having been to numerous tracks in the area, Lafromboise said she's eager to see what the new one will look like.

"I heard they're building a new one," she said. "We've had our chance to go around here and we can tell it's a little bit older, so it's good to have a new one."

Sam Ficarro is a reporter with The Columbus Telegram. Reach him via email at sam.ficarro@lee.net

Should development out at the casino and horse track site west of Columbus advance as expected, Tap Attack may be remembered as the final winn…

Members of the Columbus Exposition and Racing and their families pose for a picture Saturday with the winning horse Tap Attack after the final race at Ag Park. 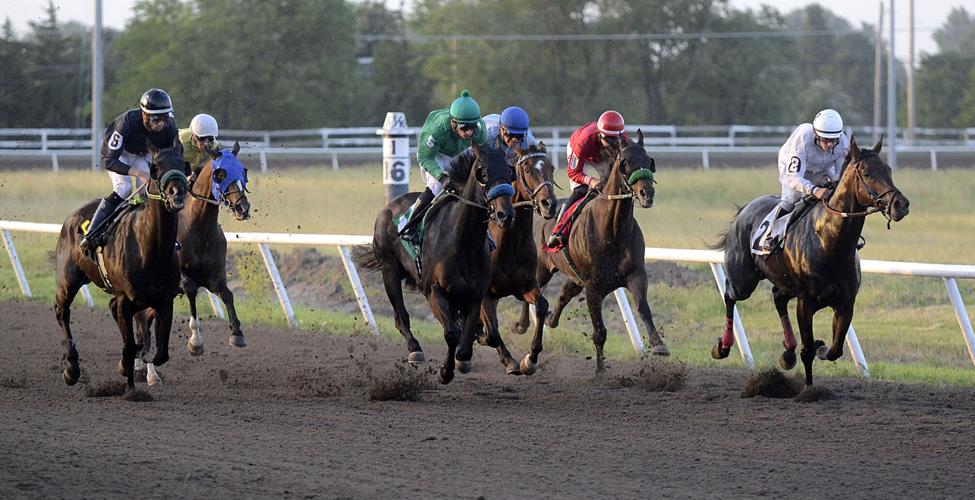 The six horses competing in the second-to-last race Saturday night charge out of the starting gate at Ag Park in Columbus.

Spectators gather along the railings next to the track ahead of the final horse race at Ag Park Saturday night.