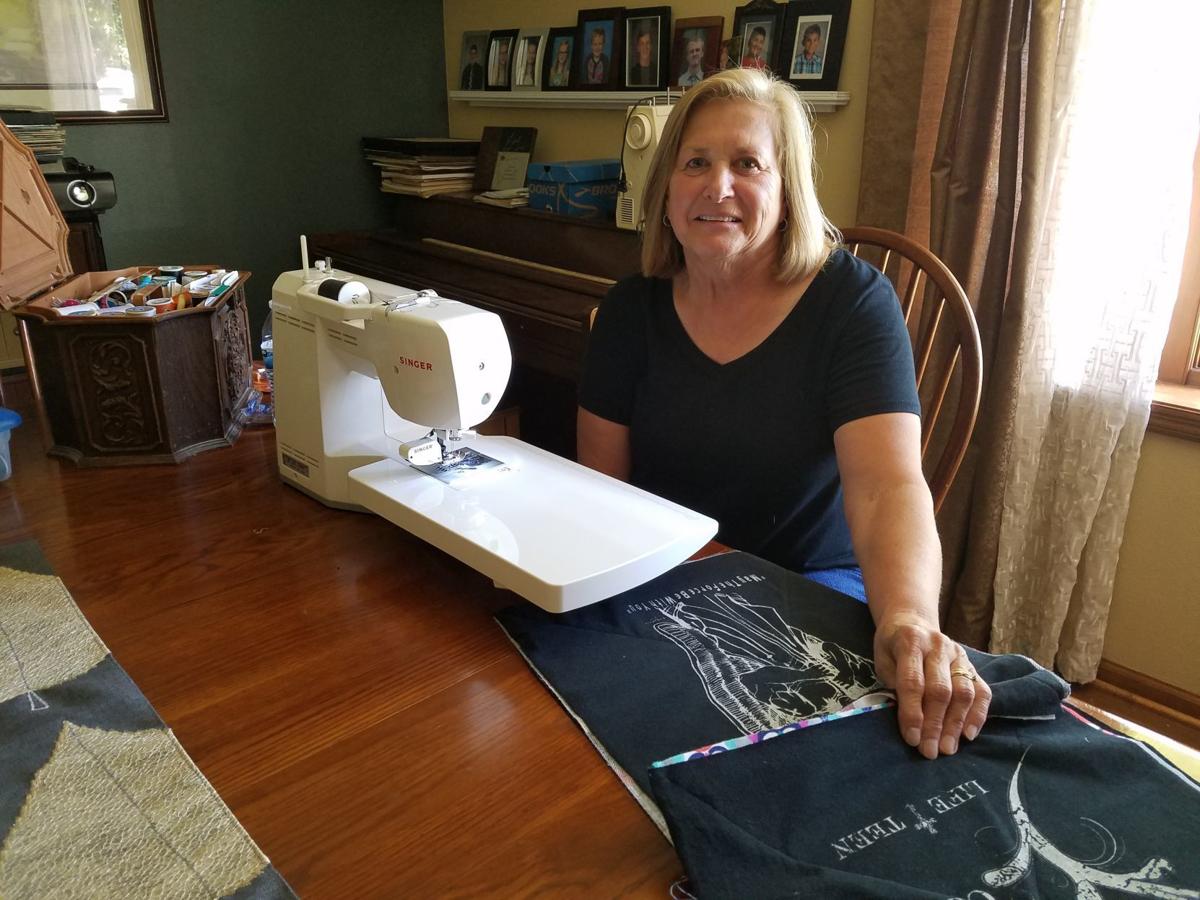 Marlene Hartman shows off her sewing machine, which she has been putting to good use as of late since retiring. 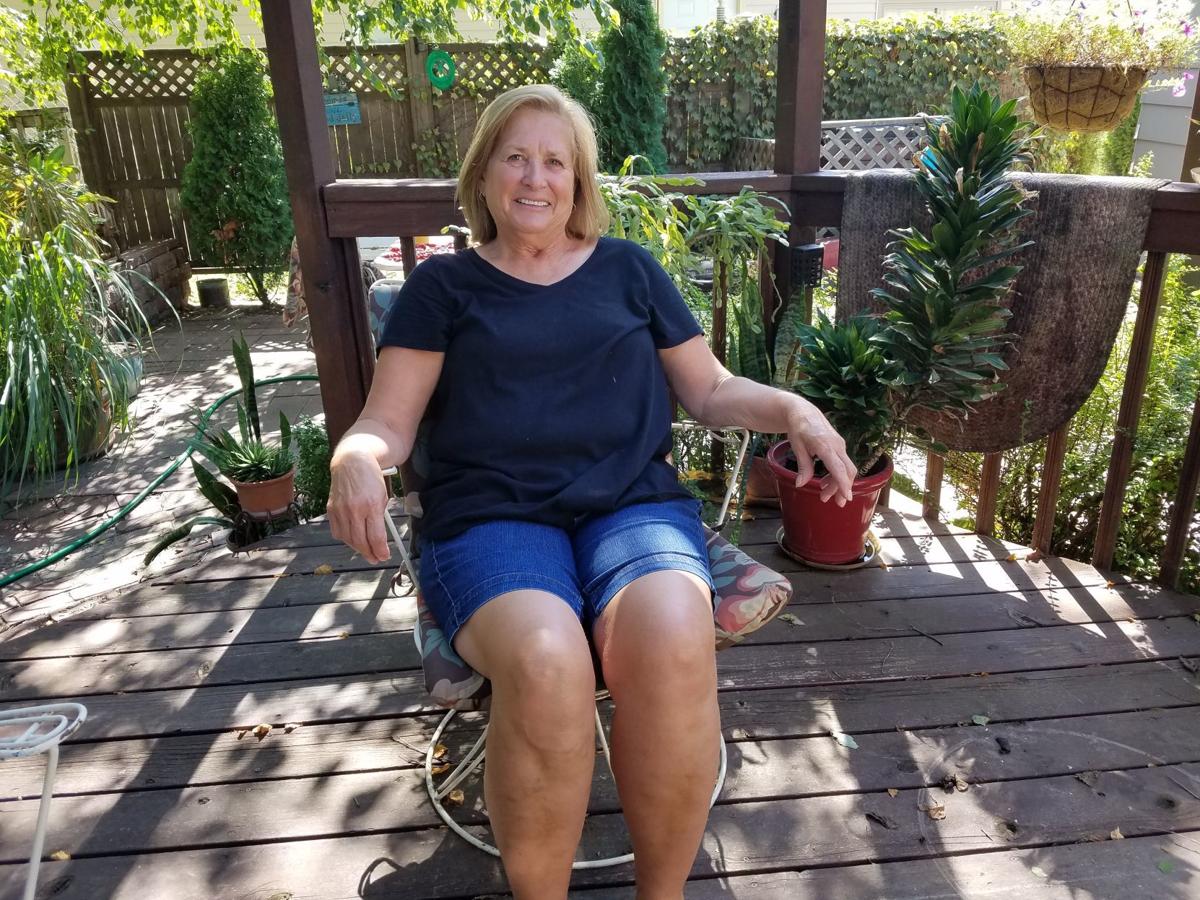 Marlene Hartman enjoys some time on a recent afternoon in her backyard.

Christmas of 1990 was hardly the merriest for longtime resident Marlene Hartman. Four days before the big holiday, she got what she called a scary phone call from the hospital.

“The nurse called me to tell me I had breast cancer,” she recalled, noting her doctor was on maternity leave at the time. “It was shocking – it was shocking news to get."

Hartman had found a lump on her right breast earlier in the month and made an appointment for a mammogram. Still, the results of the biopsy hit her hard.

“We kind of knew,” she said. “When I found it, that’s what you think is going to happen.”

Hartman is practically a Schuyler native, having grown up just south of town in neighboring Butler County, graduating from Schuyler Central High in 1965 and making it her permanent home for decades now.

She married her high school sweetheart, Larry Hartman, on June 22, 1968, and lived with him in Germany from July 1968-December 1969 while he served in the U.S. Army. During that year-and-a-half overseas, they made the most of it by traveling to places like Paris and Rome when he could get away.

“It was very interesting – there were lots of things to do,” she said, noting she enjoyed working at a bank there. ”I met new people from all over the world.”

But other than that, Schuyler has been home.

Hartman wasted no time when it came to her fight against breast cancer. On Dec. 28, 1990 – just three days after Christmas – she went in for a mastectomy (removal of the whole breast), as she noted at that time it wasn’t an option to just remove the lump.

That procedure was followed by approximately six months of chemotherapy that began in February 1991. She was working in the office at Columbus Industrial Engineering at the time, so she went for chemo every Friday for three weeks in a row in Schuyler and Omaha. She then went back to work Monday and would take every fourth week off from chemo.

“I lost my hair, as most people do,” she said. “It wears you out. Fortunately, they caught the (cancer) early."

Hartman has been in remission since fall 1991 and is thankful for that. But, her experience inspired her to give back to the community. She served as president of the Colfax County chapter of the American Cancer Society for 20-plus years and spent a lot of years visiting with breast cancer survivors after they went through surgery to provide some information and someone to talk with about it all. Also, she helped out with the local Relay For Life for quite some time.

“I just thought I could be some kind of help,” she said.

She did all this while raising her three children, Carrie, Bryon and Jamie, and having a full-time career. Over the years, she’s worked at a religious center and the hospital in Schuyler and did some bookkeeping work at offices in Columbus. More recently, she worked as the school business manager for Schuyler Community Schools for 15 years. Well, up until she retired a few years ago.

“She was a strong, strong person,” she said of Hartman’s cancer battle. “She took everything in stride, kept working and taking care of her family. It did not slow her down at all … She would do anything for anyone.”

These days, she and her husband run around to watch their 15 grandchildren compete in various athletics. They also enjoy golfing and tending to their garden. She’s also gotten back into an old hobby.

“I like to sew,” she said, noting she’s working on some T-shirt blankets for some folks. “I think they turned out OK.”

Sewing and quilting are two of many things she has in common with friend and fellow Schuyler resident Lois Kramer. The two went to Schuyler Central together but became “very good friends” when they worked together at the local school district for several years in the 2000s, according to Kramer.

“She’s a person who is not afraid to take on new adventures or projects,” Kramer said, noting working together all those years was ‘a lot of fun.’ “She’s a very strong, dedicated person who is involved in a lot of things. She’s always willing to help."

As for breast cancer, Hartman had one piece of advice for folks.

“Get your annual checkups,” she stressed. “Do monthly exams and be sure to get your annual physical – get your mammograms every year. That’s important … Don’t give up and have a positive attitude.”

Matt Lindberg is the managing editor of the Schuyler Sun. Reach him via email at matt.lindberg@lee.net.

Marlene Hartman shows off her sewing machine, which she has been putting to good use as of late since retiring.

Marlene Hartman enjoys some time on a recent afternoon in her backyard.