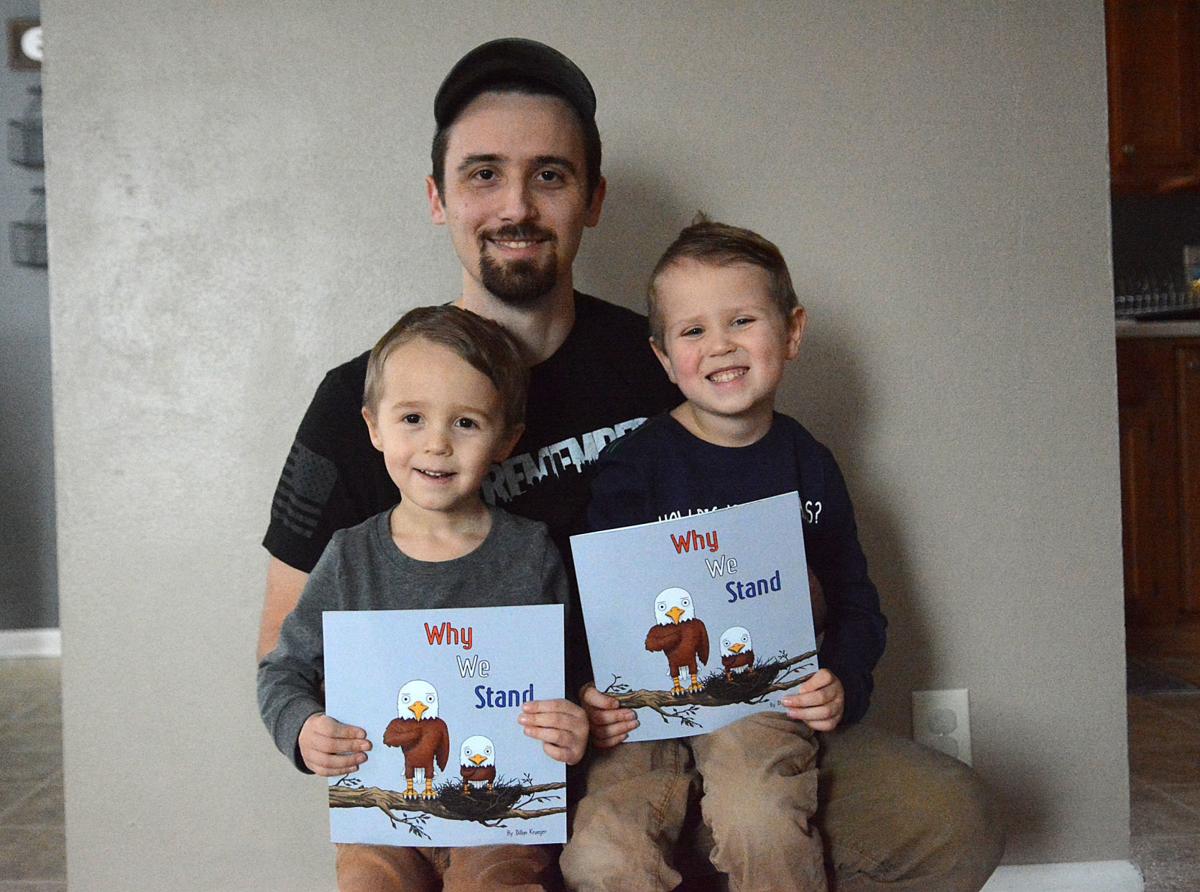 Local artist Dillon Krueger holds his sons, Maddox, left, and Liam, right, as they show off the children's book he wrote and designed. Krueger, known for several public projects in the area, spent 14 months putting together the project. 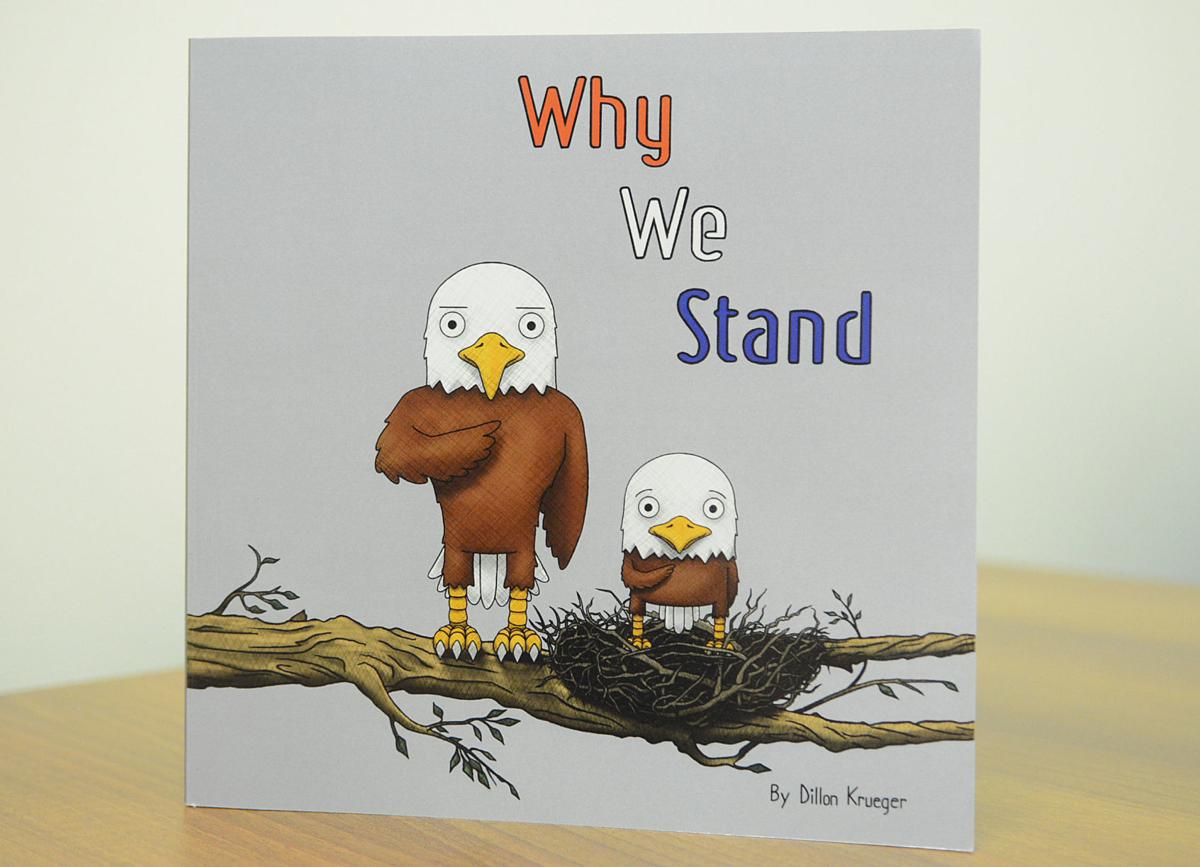 Krueger's book is intended for ages 6-8 and explains the history behind the Star-Spangled Banner and why Americans traditionally stand for the National Anthem and American Flag. 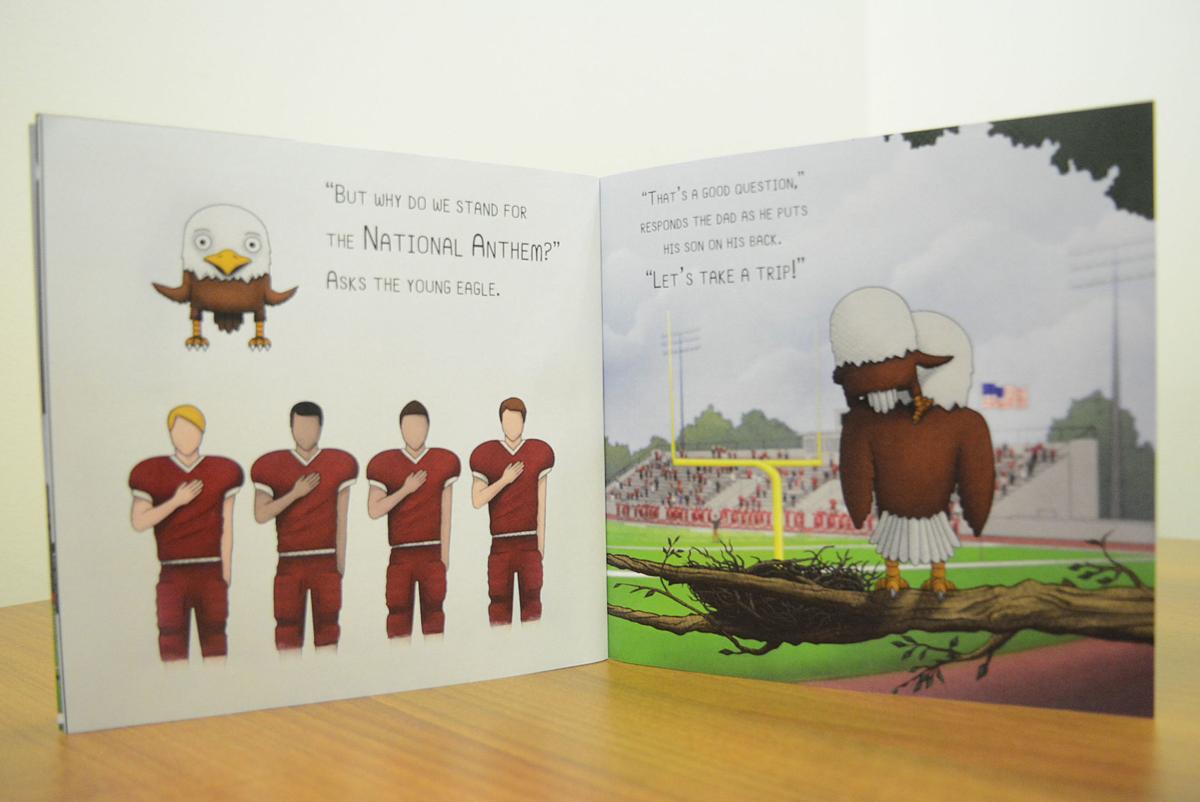 The story of the book is told through the perspective of a father and son American Bald Eagle duo watching a football game that then take a trip across the country.

Local artist Dillon Krueger will be in the Shelby Library on Thursday afternoon signing copies of his children's book: "Why We Stand."

Krueger has lent his hand to several public projects in the area including a mural at the American Legion, the Husker wall at Reg's 7 Mile Steakhouse and the train inside Micek's Shangrila.

But while the U.S. Army vet who spent a tour of duty in Afghanistan is well-known for several local paintings and private works, it's perhaps his latest accomplishment that has inspired his greatest level of pride.

Krueger made the book for his two sons, Liam and Maddox, as a lesson about the American flag and showing respect, especially during the national anthem.

Liam 4; and Maddox, 3, will begin reading soon, and Dillon wanted to have his two sons learn early on about patriotic pride. Although images of athletes kneeling during the anthem as a protest have slowed recently, Krueger has been concerned, since the controversy started, that too many children are lacking the lessons necessary to understand certain American traditions.

Therefore, he created his 12-page children's book featuring an American bald eagle teaching his son "Why We Stand."

"The boys sat down with me, we opened it up together and read through it the first time," Krueger said about when the first copy arrived in November. "There was a lot of anticipation. It was kind of a surreal experience holding the book. It took a while to process that it was actually there and done."

Krueger is a Columbus native and Columbus High grad who started as a doodling child that became an amateur tattoo designer for his fellow soldiers while in the Army. That eventually turned into requests from his superior officers for various murals and, once he returned from deployment in Afghanistan and Germany, an associate degree in graphic design from Northeast Community College in Norfolk.

He also took a part-time job at Reg's, cooking on Fridays, and was asked to paint a mural on the north wall once his talents were discovered. As more and more patrons were exposed to the painting, more and more work rolled in.

Up until the last year or so. Granted, the work continued to come Krueger's way, but he put it on hold to work on "Why We Stand."

It took him 14 months to combine the story with physical drawings that became digital ones. After researching how to self-publish, he chose Amazon. There were some snags along the way, but once it was completed, Amazon reviewed and approved the book quickly.

"I was pretty shocked when they approved it in only two days," Krueger said. "Immediately after that, you get to choose when the publishing date is. I decided to have it published as soon as they approved it. Two days later, I pulled up my Amazon, and there it was."

Some pages took longer than others. The first full spread took about a month and a half. From his pencil drawings, Krueger then uploaded it to his iPad and added the color.

The learning curve was in formatting and making his images fit. Not all of them did, forcing him to redesign a handful of pages.

Once that was completed though, the turnaround was rapid.

Switching from the oils and the acrylic paint to the digital side was definitely a hurdle on its own.

"I don’t have Photoshop or anything to format my images to the sizes they needed. I kind of had to do a runaround," Krueger said. "After trial and error, I was able to get them to accept my final for my manuscript. There were a lot of things going through it the first time I didn’t know how to do."

The story begins in a nest on a tree limb near a football game. As the crowd stands for the National Anthem, the father eagle begins to explain the origin of "The Star-Spangled Banner" with a historical perspective on Francis Scott Key (who wrote the lyrics for the American national anthem) and then a trip to New York by the Statue of Liberty and to Washington D.C. by several sites and monuments.

The eagle characters don't have names - Krueger hadn't planned on character development for this work since it was intended as a one-time project.

But now that it's finished, he will likely do another, name his characters and begin to introduce their own stories. He has several ideas for the next book, but the one that stands out the most is helping children grasp the idea of mommy or daddy leaving for an extended period of time in service to the country.

"The response was really amazing online. We’ve sold about 700 copies. After that, I could see myself doing more children’s book work. I could go down that path full time," Krueger said. "But I also still enjoy doing commissioned oil paintings. I’m keeping my options open right now, but I do plan on doing another book."

The book retails for $10 on Amazon. Krueger will be in Shelby from 3:45 p.m. to 4:30 p.m. on Thursday. He will autograph the book and sell copies for $15, slightly more to help cover the cost of shipping for his bulk order.

"Since (the first copy arrived), we’ve read it many times," he said. "The coolest thing about the whole experience, without a doubt, is, now when we go for a drive through town and the boys see an American flag at a business or the side of the road, they always point it out. They weren’t nearly as aware of it before the book. That’s a really satisfying feeling."

What: Signing children's book "Why We Stand"

Why: Book explains to young audience the significance of the Star-Spangled Banner, American Flag and why standing for both is a tradition of respect.

Our own Michelangelo: Krueger lends talents to patriotic projects in and around Columbus

Local artist Dillon Krueger holds his sons, Maddox, left, and Liam, right, as they show off the children's book he wrote and designed. Krueger, known for several public projects in the area, spent 14 months putting together the project.

Krueger's book is intended for ages 6-8 and explains the history behind the Star-Spangled Banner and why Americans traditionally stand for the National Anthem and American Flag.

The story of the book is told through the perspective of a father and son American Bald Eagle duo watching a football game that then take a trip across the country.