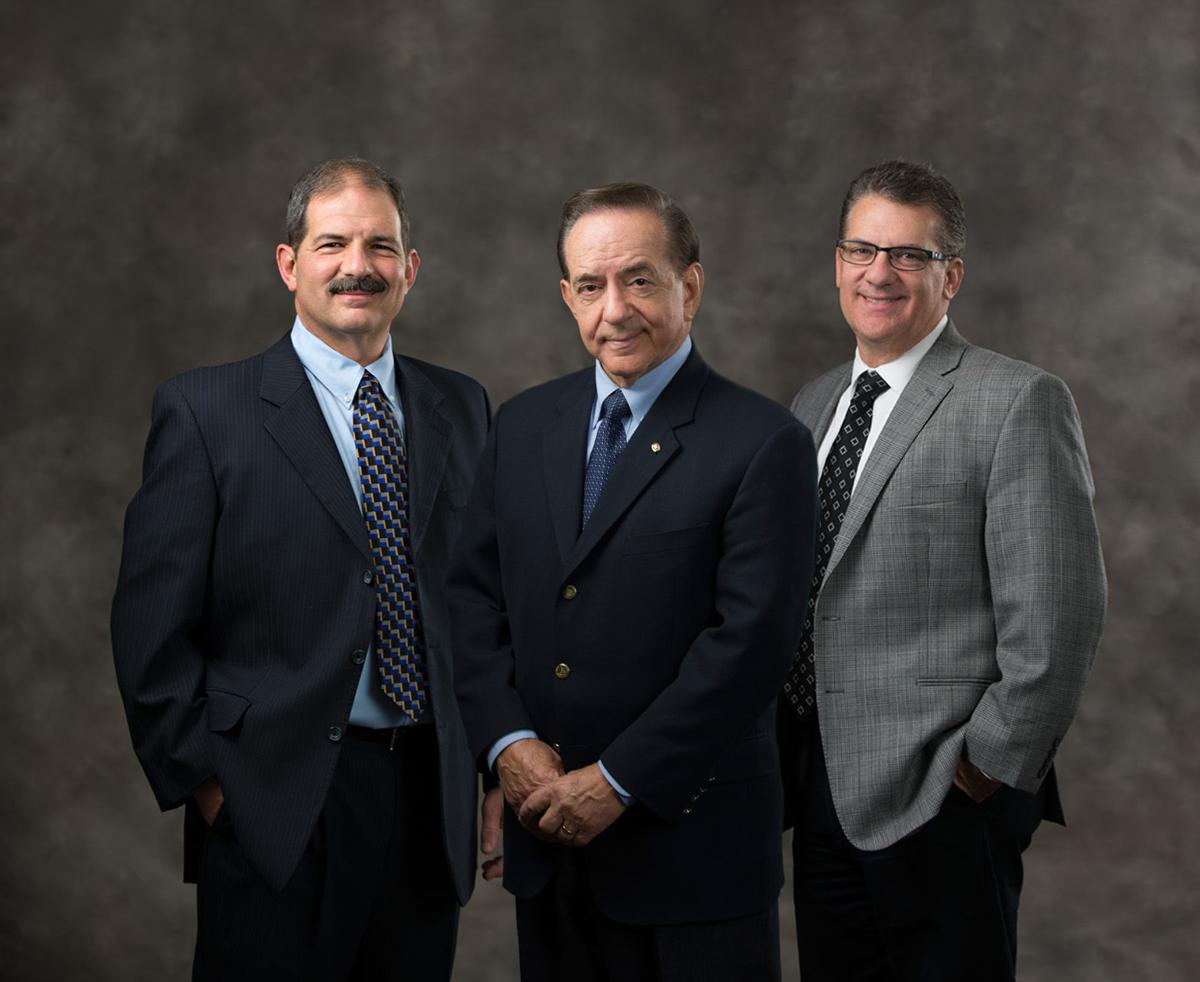 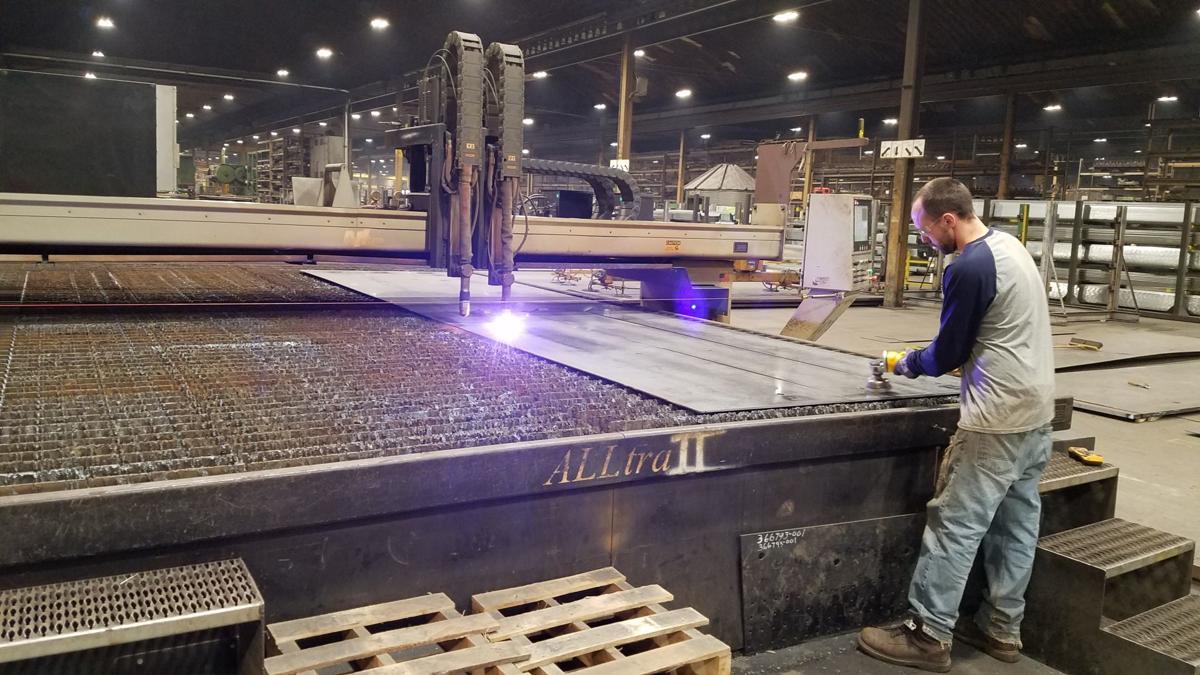 Travis Lesiak, who has been a Behlen Mfg. Co. employee for a little more than three years, preps the etched part number on a pole enforcer so it can go to the next step to get formed and then galvanized on a January afternoon at the company's Columbus plant. 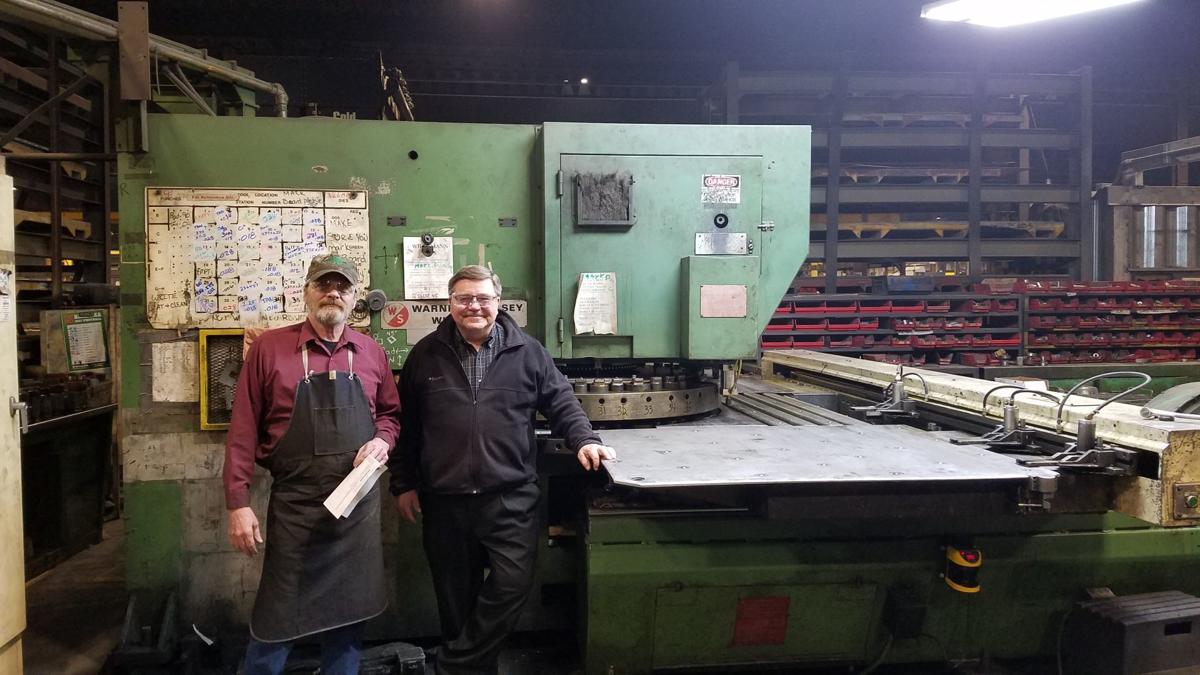 Behlen Mfg. Co. second shift employee Elder Sheets, left and Senior Vice President of Manufacturing Tom Wrigley pose for a photo on a January afternoon in front of the machine Wrigley recommended the company by more than 30 years ago. The machine, which boasts 36 tools that rotate over a part to punch holes, still operates today in the Columbus plant. 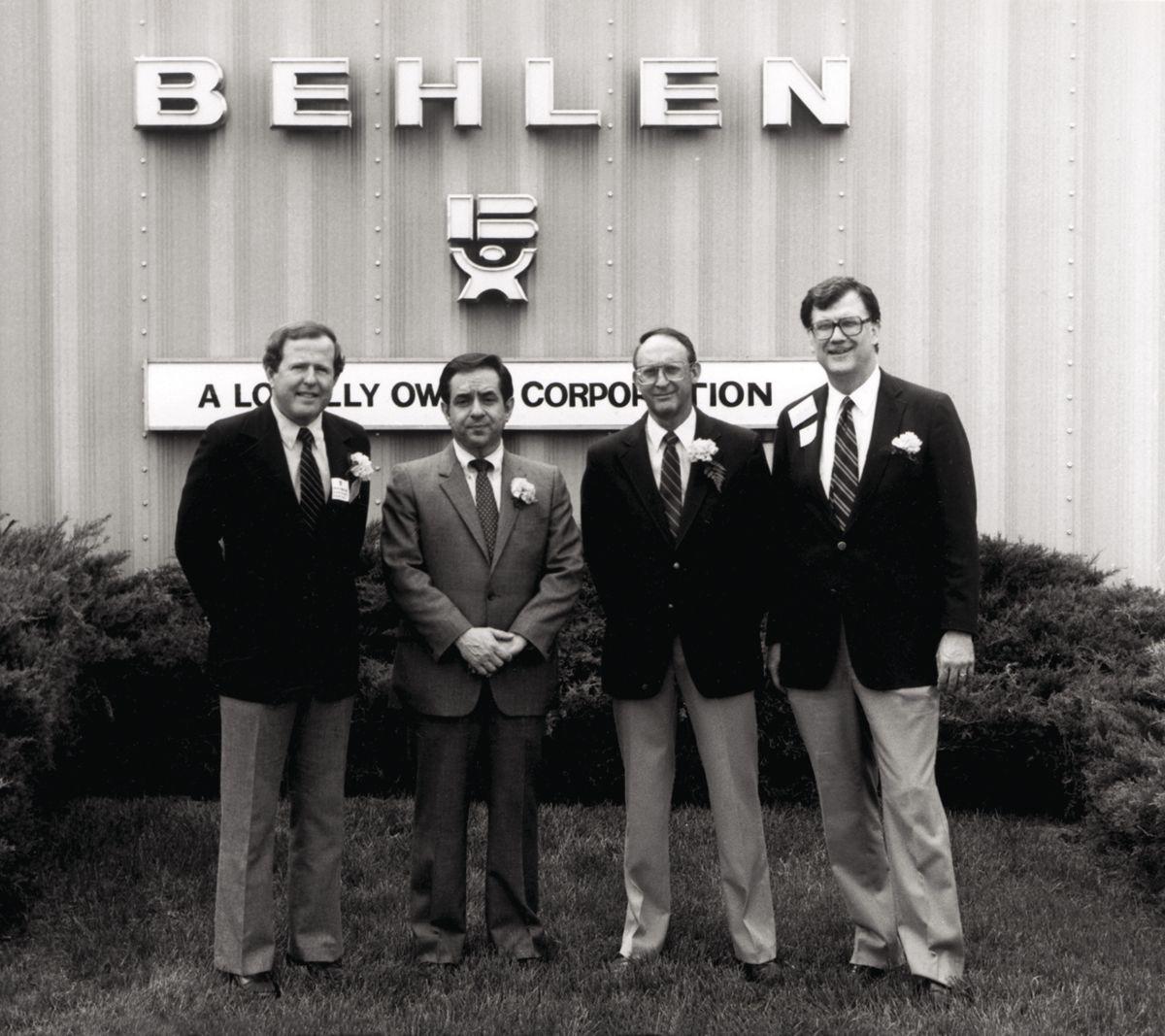 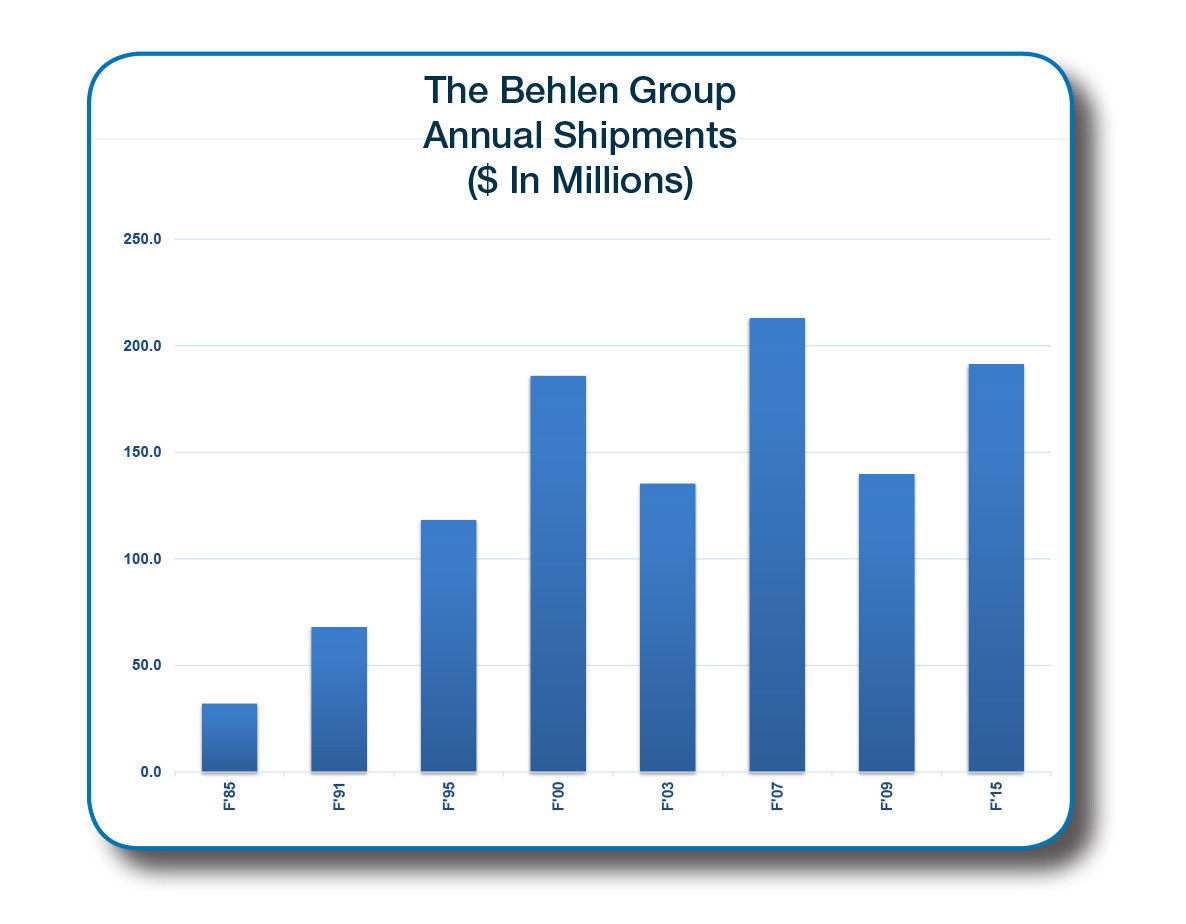 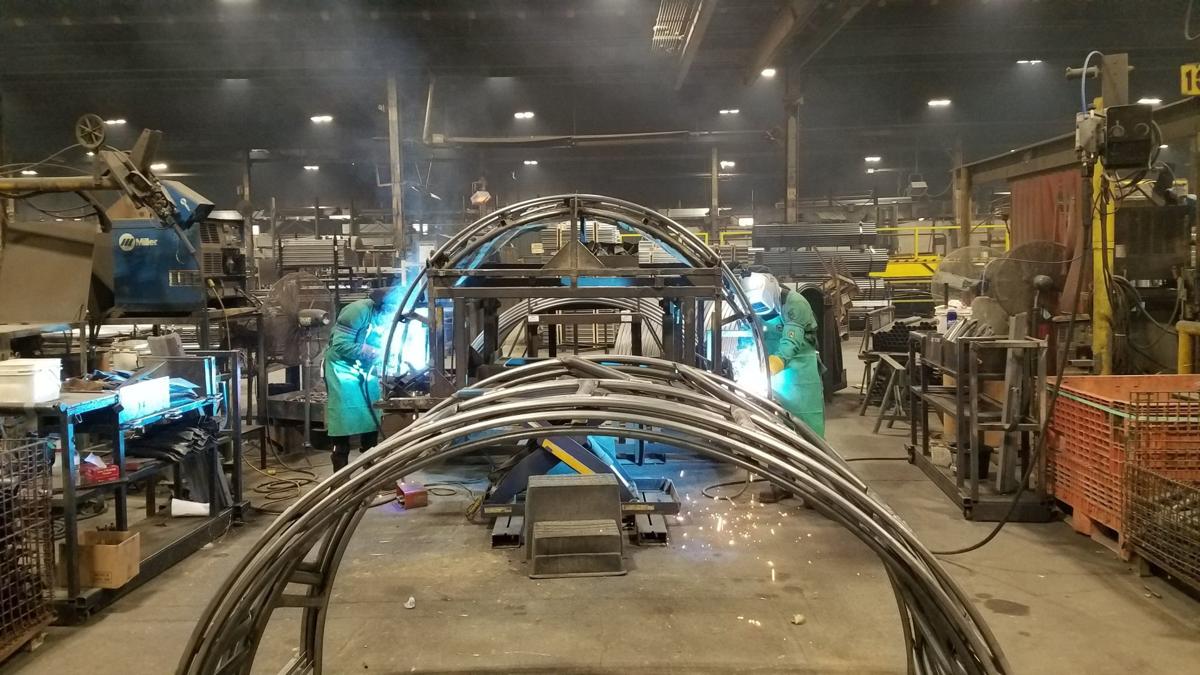 Behlen's Josue Escubar and Enrique Nava weld a two-piece round bale feeder on a January afternoon in the Columbus plant.

Behlen Mfg. Co.'s 870,000-square-foot-headquarters at 4025 23rd St. in east Columbus doesn’t necessarily look like a lot from the exterior, but that changes once you’re inside.

Past the numerous offices and desks, one will come across the company’s state-of-the-art manufacturing plant that is constantly buzzing with hundreds of employees and machines hard at work creating all sorts of parts and products. For Behlen Vice President of Manufacturing Thomas Wrigley, the plant is like a home away from home.

“I got a lot of years back here,” said Wrigley, with a smile, during a recent tour of the facility. “I was about 30 when I started.”

Despite the facility’s size, Wrigley, a 30-plus-year-veteran of the company, still knows it like the back of his hand. On a January afternoon he maneuvered his way with ease to the southwest corner of the building, where a CNC (Computer Numerically Controlled) Press continues to operate. This specific machine has 36 tools that rotate over a part to punch holes. It is particularly near and dear to Wrigley’s heart because he recommended the company acquire it back in 1986.

“I wanted to purchase this,” Wrigley said, glancing over the machine on a January afternoon. “We could see technology was coming. It has made a big difference.”

Now considered a global leader in steel fabrication with plants across the country, Behlen was first founded in 1936 in the Columbus garage of Walter D. Behlen, who first produced steel toe caps for work shoes and clamps for wooden egg crates.

Behlen was later under the direction of Wickes Corporation, and Tony Raimondo joined the company as its general manager. But following a major change in the grain industry in 1984, Raimondo, along with Dick Casey, Bob Theilen and Steve McGill, orchestrated a leveraged buyout to purchase the company.

This year marks the 35th anniversary of the Raimondo family leading Behlen, which means quite a bit to its leaders.

“The Raimondo family has owned Behlen longer than the Behlen family (1936–1969). We are proud to be leading Behlen today,” said Behlen Mfg. Co. President/CEO Phil Raimondo, also one of Tony’s sons. “Back in 1984, no one was thinking about 2019. In fact, the leadership team was in a day-to-day survival mode trying to save jobs during the ag recession of the 1980s.”

To mark the significant milestone, the company has planned a June 11 community celebration.

“We are excited to celebrate with Columbus and look forward to having a nice event that includes as many people as possible,” Raimondo said.

In the three-and-a-half decades the Raimondo family has owned the company, Behlen has grown leaps and bounds. It now has four plants with 925 employees in total across the country, in Columbus; Baker City, Oregon; Omaha; McGregor, Texas; and Sarasota, Florida.

In 2018, Behlen exported more than $10 million in products, with Canada, Mexico and Ukraine being the top three countries.

“Grain bins, livestock equipment, customer stitching presses and buildings are key products exported. All business units export to Canada,” said Raimondo, whose company makes hundreds of its own products and parts, as well as many for other businesses. “Behlen has grown by acquisitions since 1984. We started at $32 million in revenue and have plans to achieve $200 million this year. Focusing on customers and organizing by business units helped us grow to where we are today.”

Despite its growth, a key factor in the company’s success has been its ongoing commitment to its employees, who are referred to as “Partners in Progress.” There are 604 of them at the Columbus plant, which is open 24/7 every day of the year.

“I would say the thing that attracts people to Behlen and keeps them at Behlen is the family atmosphere and the flexible workforce that we have. We’re always willing to allow our people to grow internally and give them the opportunities to do so,” Behlen General Manager-Customer Fabrication Heather Macholan said.

She speaks from experience. Macholan has been in her current role for four years but started with the company 25 years ago as an administrative secretary. After starting at Behlen, she went back to get her four-year degree and eventually worked her way up the ladder. She said the job never gets old.

“In manufacturing, you must possess the ability to think on (your) feet and love the challenge of change," she said. "Manufacturing careers allow individuals to master their technical, personal and organizational skills all before their first cup of coffee.”

Elder Sheets is a second shift employee who has been with the company for about eight years.

“They treat me pretty good,” he said as he prepped the CNC Press. “It pays the bills and I got the shift I wanted.”

Treating its Partners in Progress like family is critical, Raimondo stressed.

“We are proud of our Partners in Progress (employees) at Behlen. We have always said that we are successful because of our people and pride ourselves on continuous learning (as a) key part of our Global Values,” he said.

Behlen has a job-posting system to provide growth opportunities and offers tuition reimbursement to its Partners in Progress in an effort to increase their skills and knowledge if they desire more. And in August 2018, the company began working with Columbus High School to offer apprenticeships (it currently has nine students involved with the program).

“This is a wonderful success story,” Raimondo said.

Behlen’s owners have also continued to invest specifically in its Columbus headquarters. Since purchasing that CNC press back in 1986, Behlen has bought a variety of more advanced manufacturing equipment to better serve customers and aid the workforce that is Science, Technology, Engineering and Mathematics (STEM) centric. This has resulted in those in the industry transitioning from having to rely on the naked human eye to make precision cuts to being able to utilize tech to their advantage and be more efficient when developing parts and products.

“It’s a whole new world,” Wrigley said. “You can upload a digital blueprint and it will figure out all of the specific dimensions – each hole, each slot. It has made a big difference.”

Raimondo said Behlen’s Columbus plant is expected to ship out $120 million worth of product this year, a massive increase from the $32 million the local plant shipped out back in 1984. It’s a clear-cut sign that business is booming for the company that continues to grow while priding itself on being part of the community.

“Behlen has a great heritage and a bright future,” Raimondo said. “Columbus is our world headquarters because the Behlen family started here. We are also very confident that this is the place for us, because of our loyal workforce and strong Midwest work ethic.”

As one of the biggest employers in the area and with plants all over the nation, Behlen Mfg. Co. has managed to keep business steady despite t…

Travis Lesiak, who has been a Behlen Mfg. Co. employee for a little more than three years, preps the etched part number on a pole enforcer so it can go to the next step to get formed and then galvanized on a January afternoon at the company's Columbus plant.

Behlen Mfg. Co. second shift employee Elder Sheets, left and Senior Vice President of Manufacturing Tom Wrigley pose for a photo on a January afternoon in front of the machine Wrigley recommended the company by more than 30 years ago. The machine, which boasts 36 tools that rotate over a part to punch holes, still operates today in the Columbus plant.

Behlen's Josue Escubar and Enrique Nava weld a two-piece round bale feeder on a January afternoon in the Columbus plant.