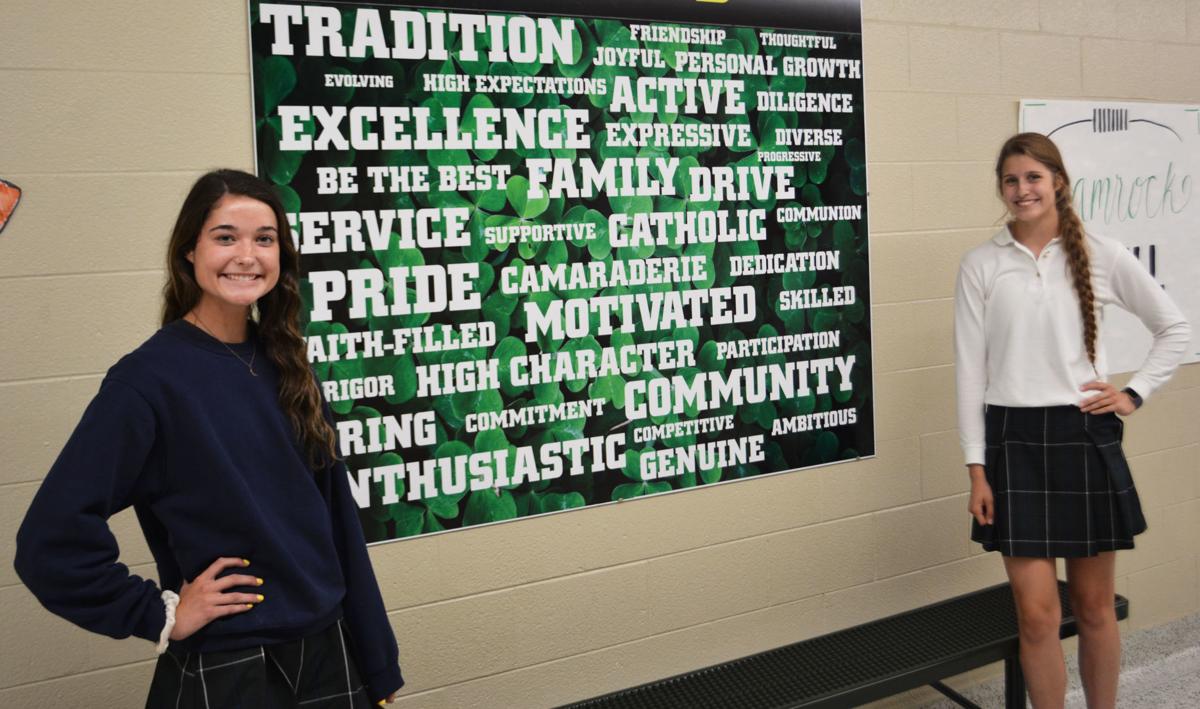 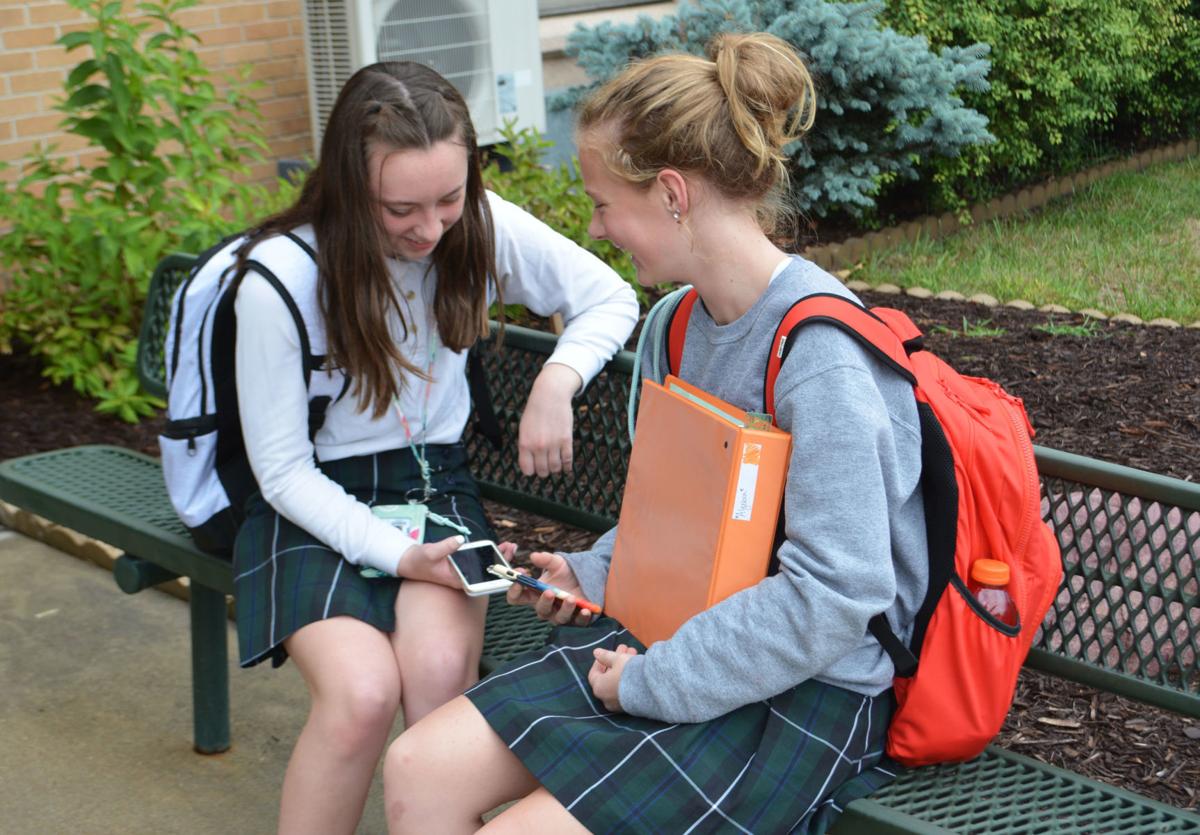 Eighth-graders Isabel Zaruba, right, and Kalee Ternus laugh while chatting after school earlier this week. The duo and 362 other students in seventh through 12th grade recently returned to classes. 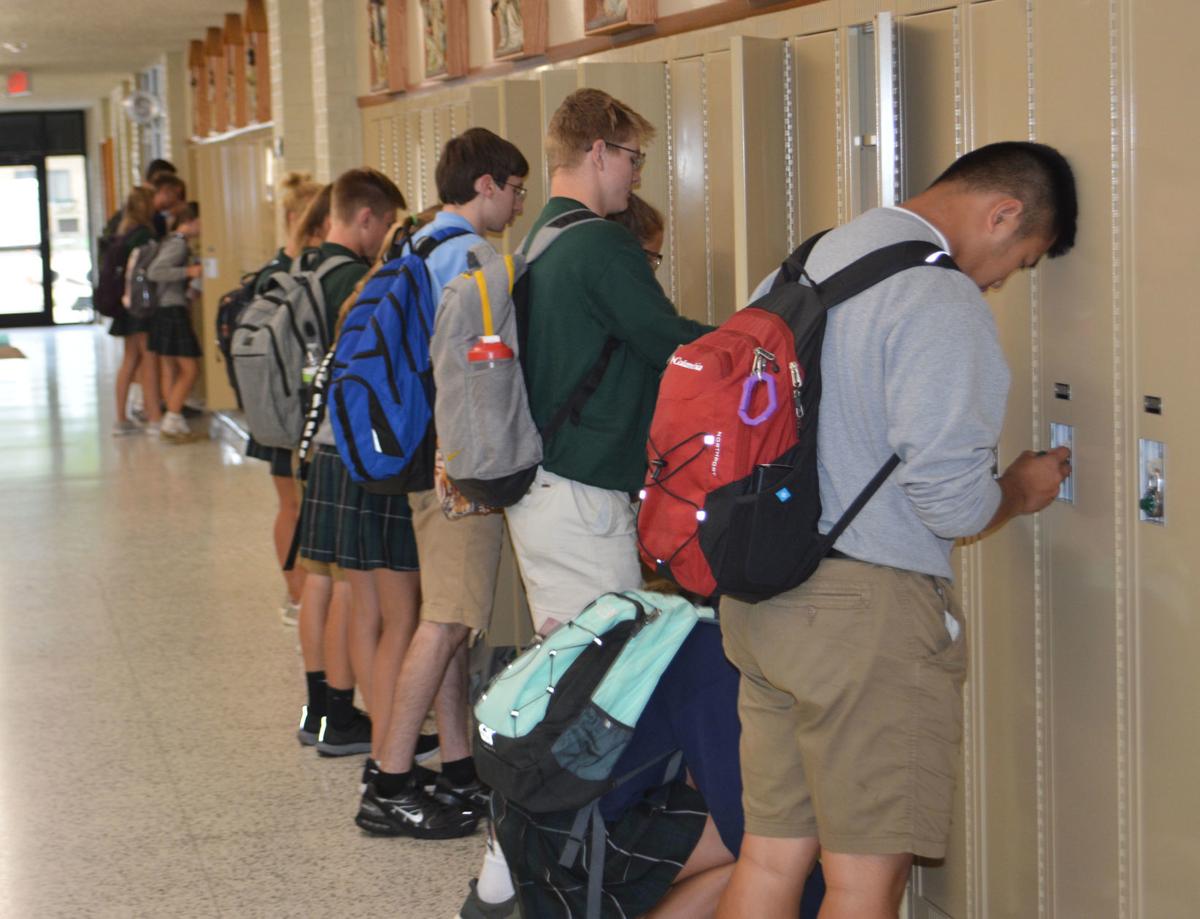 A group of students on Wednesday stand at their lockers preparing to head home following school's conclusion. 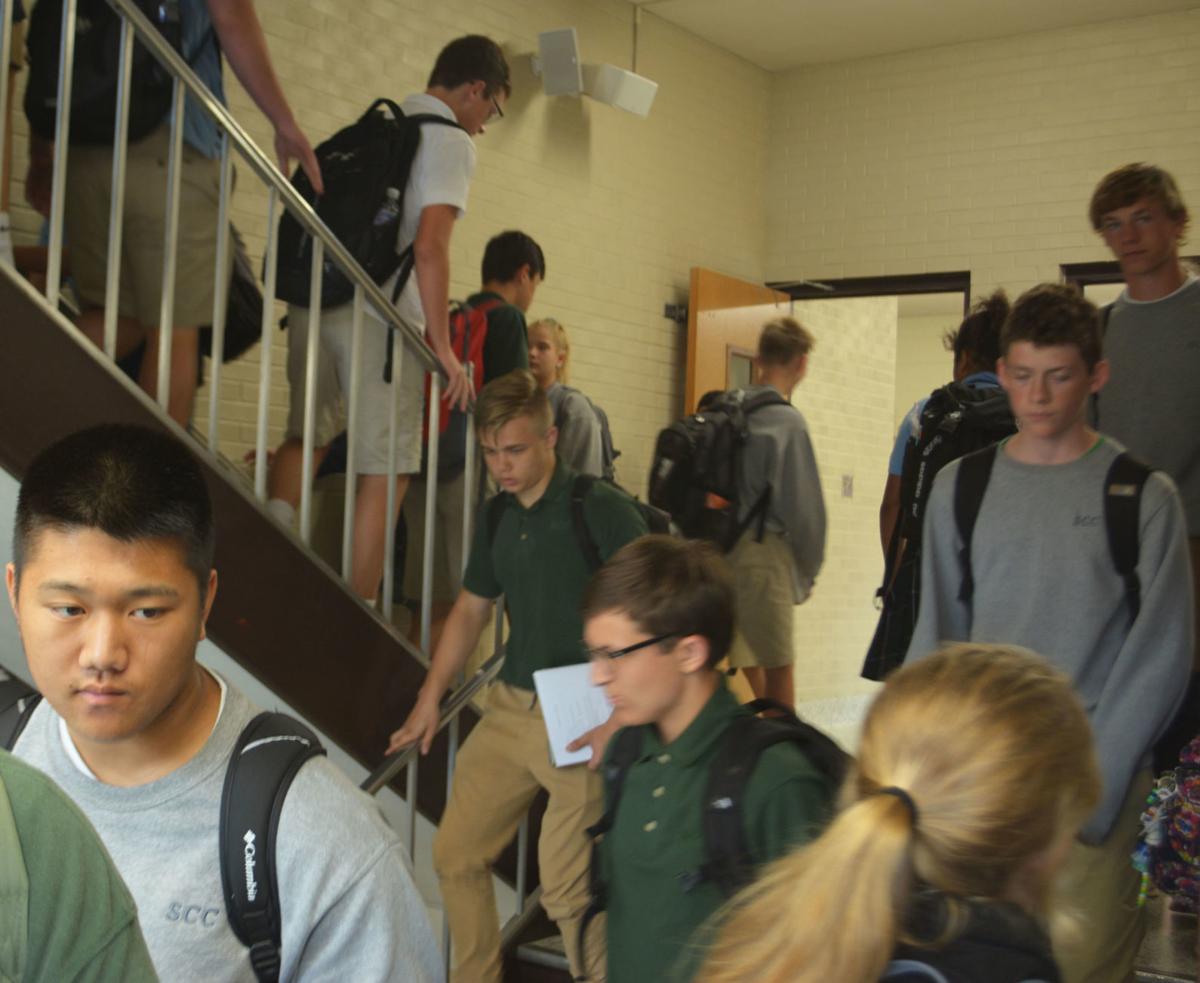 A group of Scotus Central Catholic High School students make their way down a few flights of stairs earlier this week. The 2019-20 school year recently kicked off.

Editor's note: This is the second part in a three-part series examining Columbus area schools and the 2019-2020 school year. The following story is focused on Scotus. See our website for a previously published story on Columbus Public Schools and next week in print and online for a story about Lakeview Community Schools.

Stability within its staff is something that Scotus Central Catholic hangs its hat on.

Over the past two school years, just one new teacher has joined the team. This is something that Scotus President Jeff Ohnoutka said is a major plus for seventh- through 12th-graders who call the school home from August-May.

Consistency on the teaching front also speaks volumes about the job teachers are doing, he said, noting that Scotus administrators know they have instructors who are very successful at what they do, which ultimately benefits those they teach.

Although teaching at the school has remained constant over the past few years, learning and enhancement opportunities certainly haven’t. Starting school on Aug. 14, students in grades eight-12 dove into the second year of the school’s STEAM program. The curriculum, which incorporates principles relating to science, technology, engineering, arts and mathematics (STEAM), was integrated into courses for ninth-graders through seniors last year. Now, eighth graders are reaping the rewards of the program, too, with a Career/STEAM course offered.

Some of the STEAM activities are integrated into regular coursework, and many of the activities are mapped out to encompass specific courses offered. These courses help students figure out what their interests really are.

Incorporating STEAM principles is allowing for students to walk through doors that will help maximize their growth and help them become college and career ready.

“We have a vinyl cutter, we have multiple 3-D printers, we have virtual reality that can be used in biology classes and science classes, a wood carving machine, aquaponics going on here, we have a greenhouse in our courtyard that is growing vegetables – there are lots of opportunities that Scotus students just weren’t able to participate in before,” Ohnoutka said.

Virtual reality is especially cool for students completing art courses. Using virtual reality goggles, they can visit art meccas around the world, checking out work completed by the likes of Michelangelo.

“They can just walk into the Sistine Chapel and be walking around and getting a visit of that place,” he said.

Two senior students benefiting from all-things offered at Scotus are Makenzie Enderlin and Amber Buhman. Enderlin said that it’s been a surreal experience starting her senior year, having her locker in the senior hallway and just reflecting on her time at the school.

She said she wants to really just sit back and soak in the experience.

“I want to just go to as many activities as I can to make these memories I’ll take with me from high school, to just make the best of it,” Enderlin said. “I’m also taking some college classes this year, so I feel like I’ll be better prepared for when I get there.”

Buhman, who noted that down the road she hopes to find a math-based career, said that she has enjoyed many of the opportunities provided to her through Scotus' classwork, organizations and extracurricular activities. This year, one of the activities she’s excited about is Mock Trial.

“The case will come out, and then each person gets a witness, and then we have three lawyers, and you basically learn your whole witness statement and go through the process,”Buhman said. “That is more of a club, I would say.”

Although the majority of Scotus students participate in some sort of sporting activity or extracurricular, Ohnoutka said that a new program being coined "Rock Talk" will unite students – with all different likes and dislikes – on a single front.

“Our focus this year is really on our Catholic identity,” Ohnoutka said. “We have created a new program for our students called Rock Talk. It’s based on small group interactions with our teachers and volunteers from the community.”

Once monthly, students will break into gender-specific groups for about 45 minutes with two adults to discuss gospel readings and share with each other a little bit about their own faith journeys.

“I am really looking forward to this new program,” Ohnoutka said. “… We have 90 adults committed to helping our students grow their faith.”

This year, 364 students will be walking Scotus’ halls interacting, learning, having fun and growing in their faith all the while. Ohnoutka has been part of the back-to-school process for many years, and getting back into the swing of things never gets old for him.

“It’s always exciting and just a lot of fun,” he said.

Editor's note: This is the first in a three-part series that examines the state of the three major school districts in Columbus. Today's story…

Editor's note: This is the third part in a three-part series examining the start of the 2019-2020 school year for Columbus area schools. Read …

Eighth-graders Isabel Zaruba, right, and Kalee Ternus laugh while chatting after school earlier this week. The duo and 362 other students in seventh through 12th grade recently returned to classes.

A group of students on Wednesday stand at their lockers preparing to head home following school's conclusion.

A group of Scotus Central Catholic High School students make their way down a few flights of stairs earlier this week. The 2019-20 school year recently kicked off.