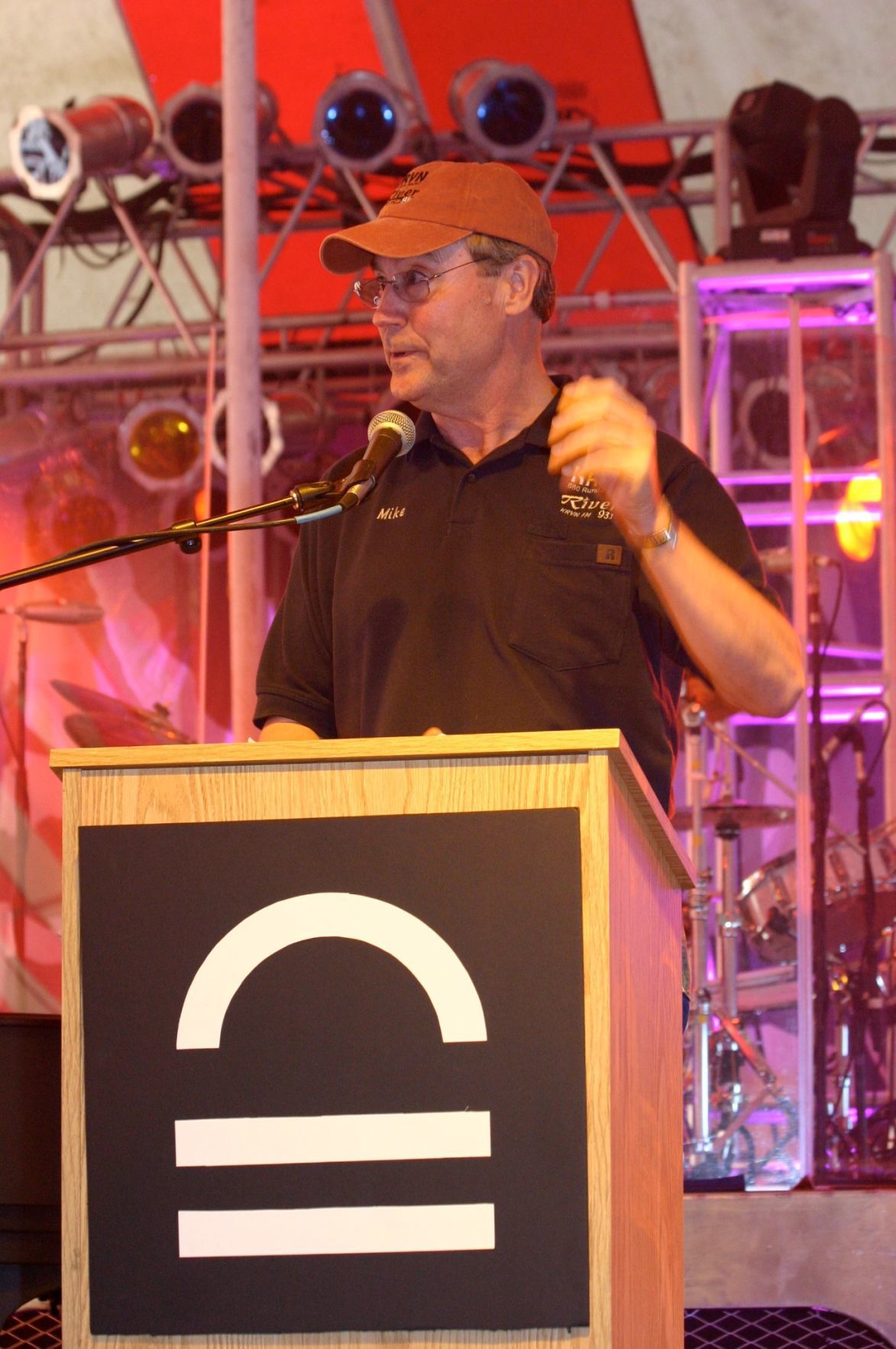 Each Cattlemen’s Ball has celebrity MCs. In 2007 Mike LePorte, then farm director for Nebraska Rural Radio Association’s flagship station KRVN at Lexington, was the Saturday host. 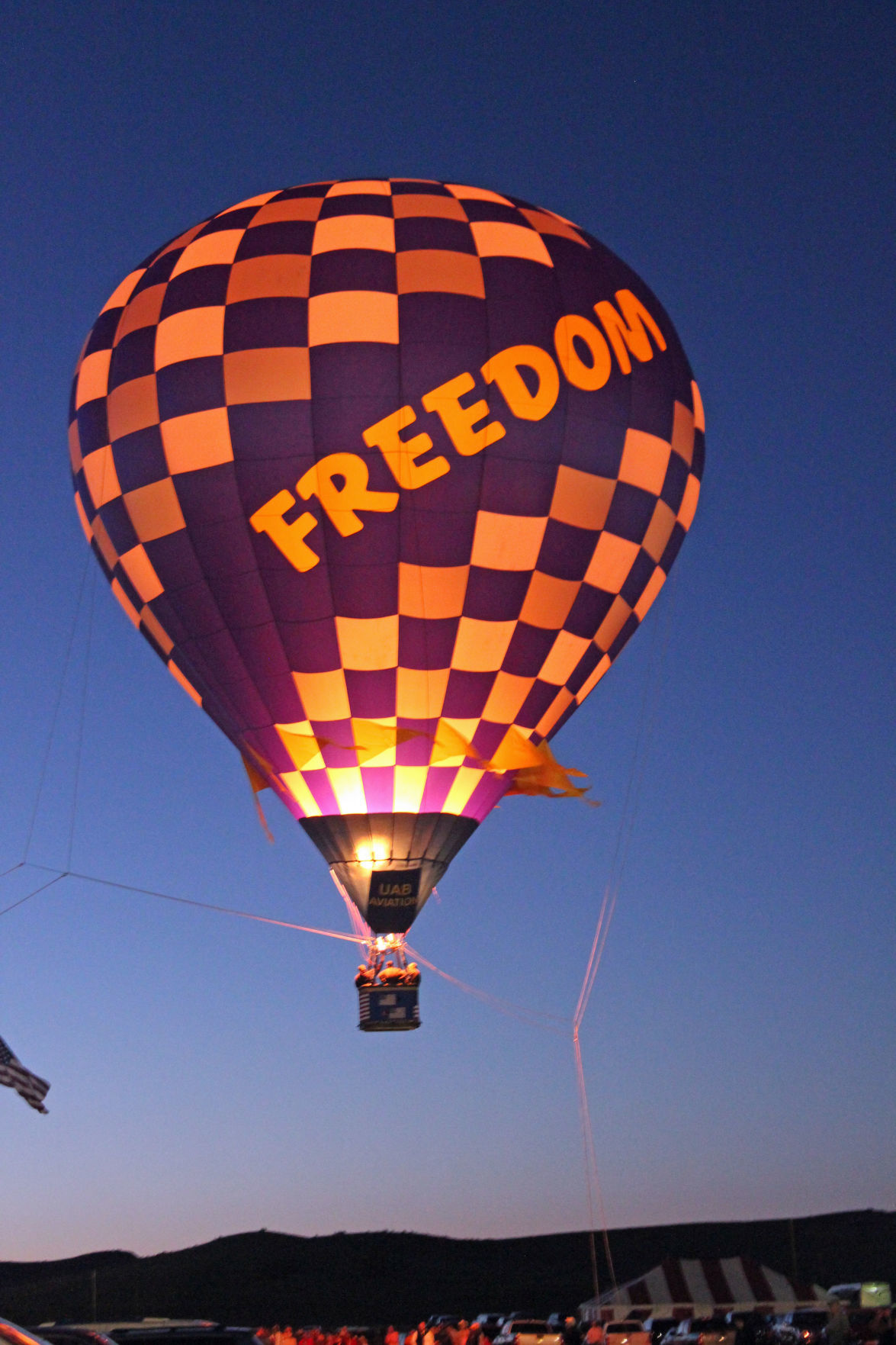 At sunset ball attendees could have a tethered balloon ride for a fee at the 2013 event. 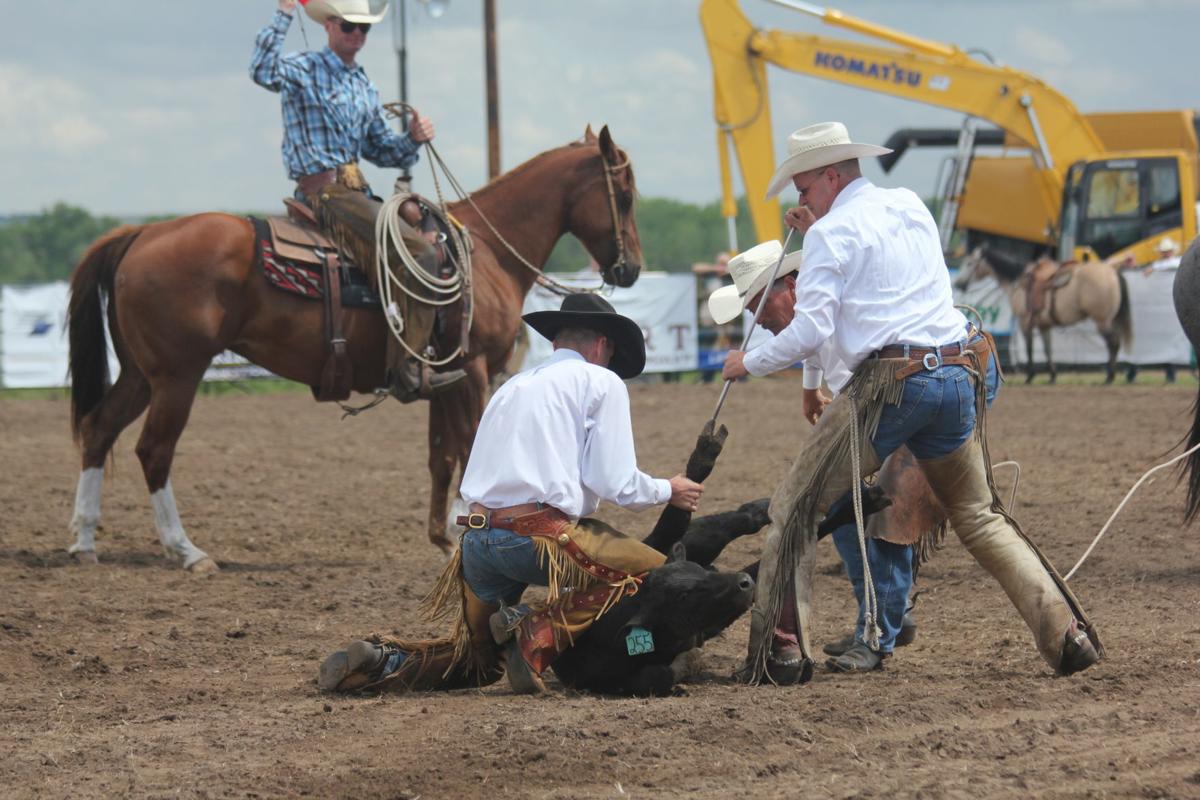 Each ball features demonstrations of working ranch techniques, which evolved into the ranch rodeo shown in this 2013 photo that continues through the 2020 ball.

It has been dubbed the “state’s biggest pasture party,” but in reality it is much more. The Cattlemen’s Ball of Nebraska, was established to promote beef in a healthy diet, showcase rural Nebraska and to raise money for cancer research.

Since 1998, the ball has raised more than $14.7 million to fight the big “C.” Each year, 90% of the proceeds go toward research at the Fred and Pamela Buffett Cancer Center in Omaha. A nonprofit charity, the Cattlemen’s Ball donates the remaining 10% of dollars raised to Nebraska communities for health and wellness programs.

It all started with a group of friends who in one way or another had their lives touched by cancer.

“We were looking for a way to help out,” said Kae Pavlik of Yutan, Nebraska, and one of the founders of the Nebraska Cattlemen’s Ball.

There had been some attempts at starting a Cattle Baron’s Ball teamed with the American Cancer Society in the early 1990s, but it never got statewide support.

Then in the late 1990s, Pavlik and a group of 15 friends sat down at the Haythorn Ranch near Ogallala, Nebraska, and began brainstorming how to expand on the idea. Knowing that the University of Nebraska Medical Center in Omaha was centered on cancer research, she and a core group spent two months working with UNMC representatives to mesh their interests in finding a cure for cancer while spotlighting Nebraska’s cattle industry.

The first ball under the new name took place in 1998 near Ainsworth at the Graff/Snover Ranch.

“It got the western part of the state involved,” said Pavlik. “It just takes an extra spark somewhere and it just kept going.”

That special spark came in the form of Dr. Ken Cowan, she said. He became director of the Fred and Pamela Buffett Cancer Center at UNMC in 1999, and he knew who to approach.

“You could get together and make a difference,” Pavlik said.

Since then the enthusiasm for the ball has mushroomed. The advisory board now works to alternate ball sites between the east and western parts of the state to showcase different regions.

“People are now coming forward to host the ball or volunteer and it’s wonderful,” said Pavlik. “Unity is a big word in this effort and I love what I’ve been and what I’m still able to do for the cause.”

The rotating event sites gives the host community and the region around it the opportunity to showcase its corner of the state. To date the ball has been held near Ainsworth, Lexington, Arthur, Valentine, Valparaiso, Ashland, Brady, Wisner, Milford, Doniphan, Lodgepole, Albion, Kearney, West Point, McCool Junction, Sutherland, Princeton, Lynch, Banner County, Anselmo, Hebron and Wauneta.

As the days wind down to the 22nd ball on June 5-6 near Columbus, hosts Scott and Patricia Mueller have plenty on their plate. Thankfully, there is a system in place that keeps things running in a rhythm, Pat Mueller noted.

“We have 50 different committees dealing with various aspects of the ball from entertainment to parking to the catering of meals and beyond,” she said. “We have planned some Sheriff’s Societies wine tastings during March to help raise some seed money for the ball and we have a tour of the Fred and Pamela Buffett Cancer Center planned for April 3 that is open to the public. These are some new events we hope will create additional interest in the event.”

The Muellers have had a hand in many areas of the beef industry since the 1980s, including cow-calf, a feedlot, cropland, feed sales, commodity sales and a process verified program, Samson LLC. In addition, Pat Mueller has operated Traditions Restaurant and Bed & Breakfast in Columbus for 20 years.

Getting ready for more than 4,000 guests takes some planning. Last fall, the Muellers planted an area along Shell Creek near Columbus to rye where the event tents and parking will be.

“We planted a heavy, good cover we hope will stand up to the walking and driving. We have also done some dirt work and tree removal to free up open space at the site,” she said.

As spring rolls around they will need to put in a well to provide water for all the ball activities and scope out where all the electrical hookups and wiring will need to go to provide lighting and power for the event.

Suzanne Jagels, executive secretary on the event’s advisory board, noted hosts are chosen two years in advance so they have the opportunity to begin preparations at their respective operations.

The advisory board Jagels sits on oversees the ball and assists with much of the behind-the-scenes work throughout the year. In recent years a group of 10-12 co-hosts help by leading various subcommittees that deal with everything from the annual art show and Calf-for-a-Cure to the health and wellness tent and the golf tournament. Hundreds of local volunteers lend a hand, too.

When the Cattlemen’s Ball started as a one-day event. The addition of a golf tournament, various auctions and fundraising efforts expanded the schedule to two days in 2007.

A Trail Boss ticket for $400 buys entrance to a Friday evening reception, a Saturday morning champagne brunch and lunch with early access to the general store and all exhibits. They premium ticket also offers preferred seating for the Saturday night concert and dinner.

Top Hand tickets are $125 and allow admission at 12:30 p.m. Saturday and include an evening dinner, concert and dance.

The Saturday night concert with a major country headliner is a big draw. In recent years those artists have included JoDee Messina, Tracy Lawrence, Montgomery Gentry and Clint Black. Headlining the 2020 Nebraska Cattlemen’s Ball will be Easton Corbin and Tracy Byrd.

Other events on tap for 2020 are the annual golf tournament June 5. Day 1 festivities also include the Trail Boss reception and live auction. Exhibit tents and the general store will open, and the Side Step Band will perform.

After all the boot scootin’ and western-themed activities, the main goal is to find a cure for cancer. The festivities raise money that goes directly to cancer research and care programs in Nebraska through the Fred & Pamela Buffett Cancer Center project.

Last year Dr. Ken Cowan stepped down as director of the Fred and Pamela Buffett Cancer Center, and he looks back on what the ball has created nostalgically.

“The Cattlemen’s Ball is truly special to me, because it introduced my family and me to Nebraska,” he said.

He attended the 1999 Cattlemen’s Ball in Lexington at the home of Dr. Joe and Diane Jeffrey after he interviewed to be director of the cancer center, then the Eppley Cancer Center.

“My wife, two daughters and I were impressed with the sense of community, welcoming kindness and warm hospitality shown to us,” he said.

It convinced him and his wife that Nebraska was an excellent place to raise their daughters, who were 9 and 12 at the time. He’s attended every ball since.

“While the scenery each year has changed, one thing hasn’t: the incredibly generous people of this state who are passionately dedicated to cancer research,” he said.

For more information on the Cattlemen’s Ball of Nebraska, to purchase tickets, to check schedules or to donate, go to the website: cattlemensball.com.

Columbus will have to wait one more year to host the Cattlemen's Ball.

Each Cattlemen’s Ball has celebrity MCs. In 2007 Mike LePorte, then farm director for Nebraska Rural Radio Association’s flagship station KRVN at Lexington, was the Saturday host.

At sunset ball attendees could have a tethered balloon ride for a fee at the 2013 event.

Each ball features demonstrations of working ranch techniques, which evolved into the ranch rodeo shown in this 2013 photo that continues through the 2020 ball.