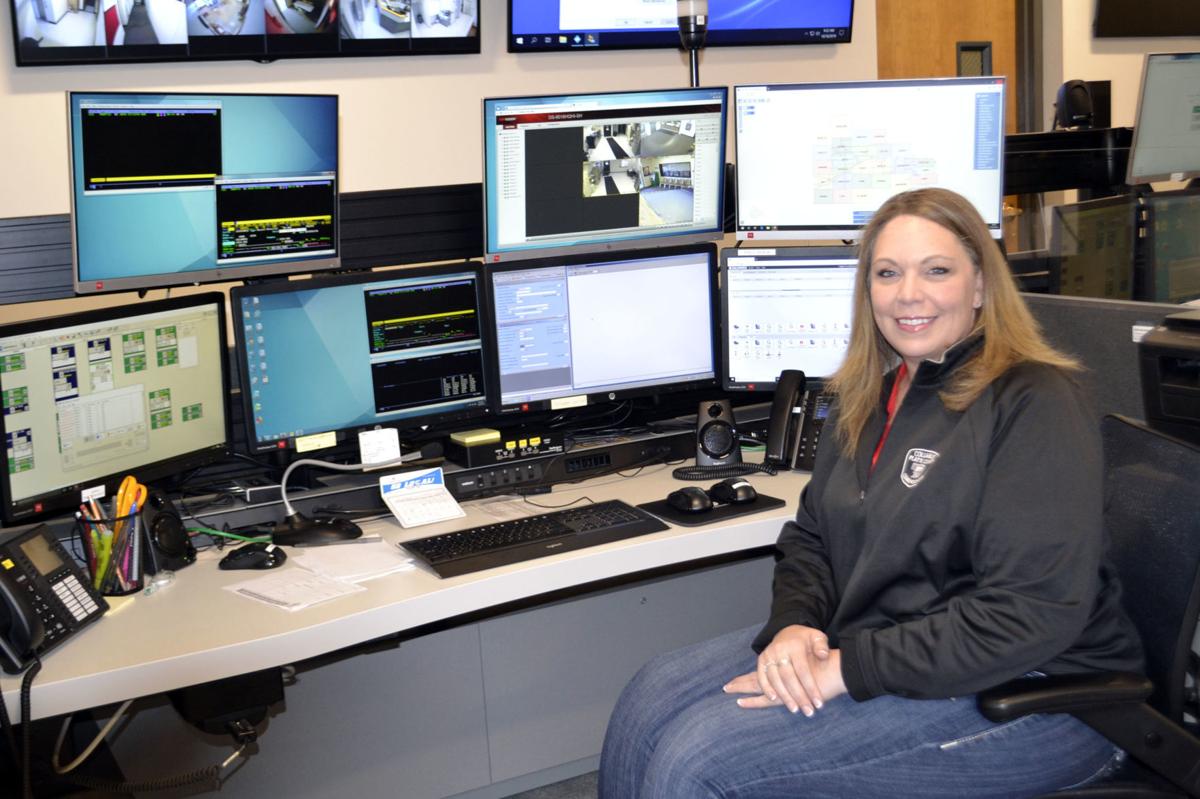 Pam Sybrant, director of the newly opened E-911 Joint Communications Center, sits next to a few of the 36 monitors filling the dispatch room located inside of the administration building at Columbus Municipal Airport. The new dispatch location houses representatives of both the Columbus Police Department and Platte County Sheriff's Office. 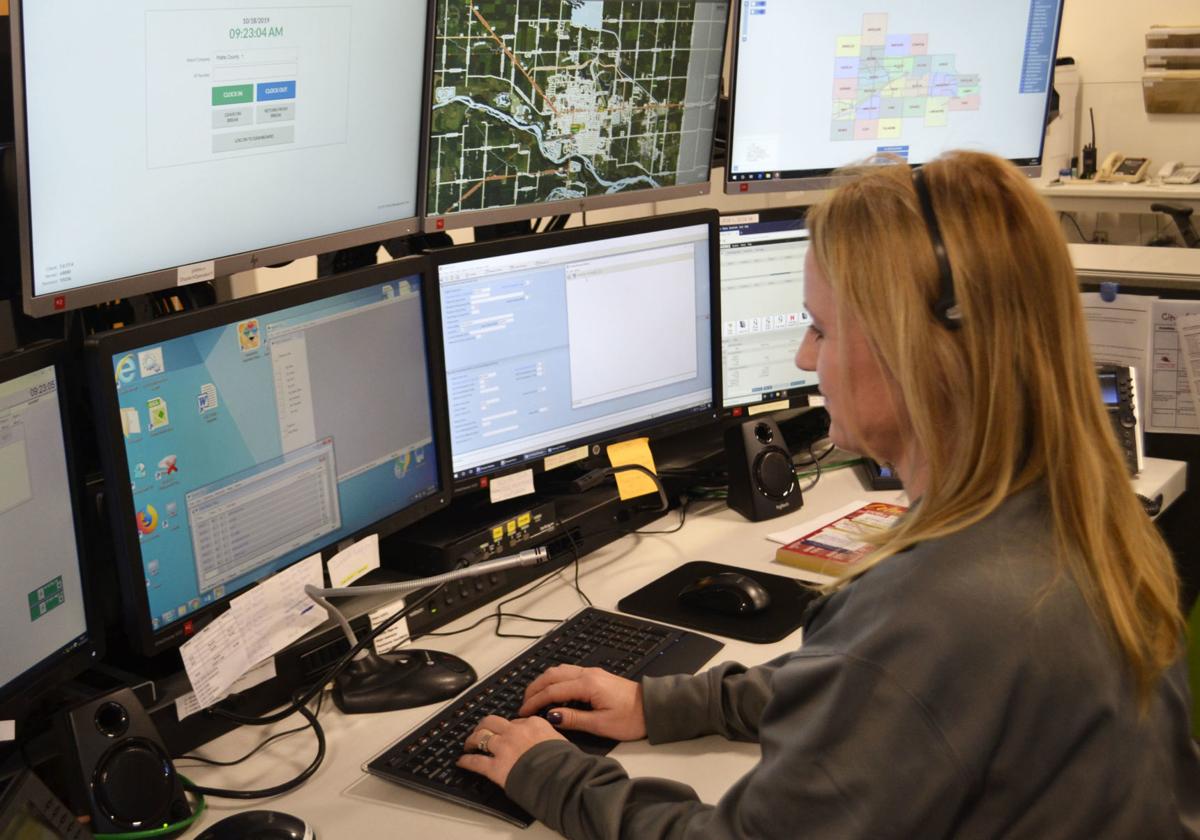 Maddy Johnson has served as a dispatch coordinator for the Platte County Sheriff's Office for 16 years. She said that the move into the newly opened E-911 Joint Communications Center has been pretty smooth sailing, overall. 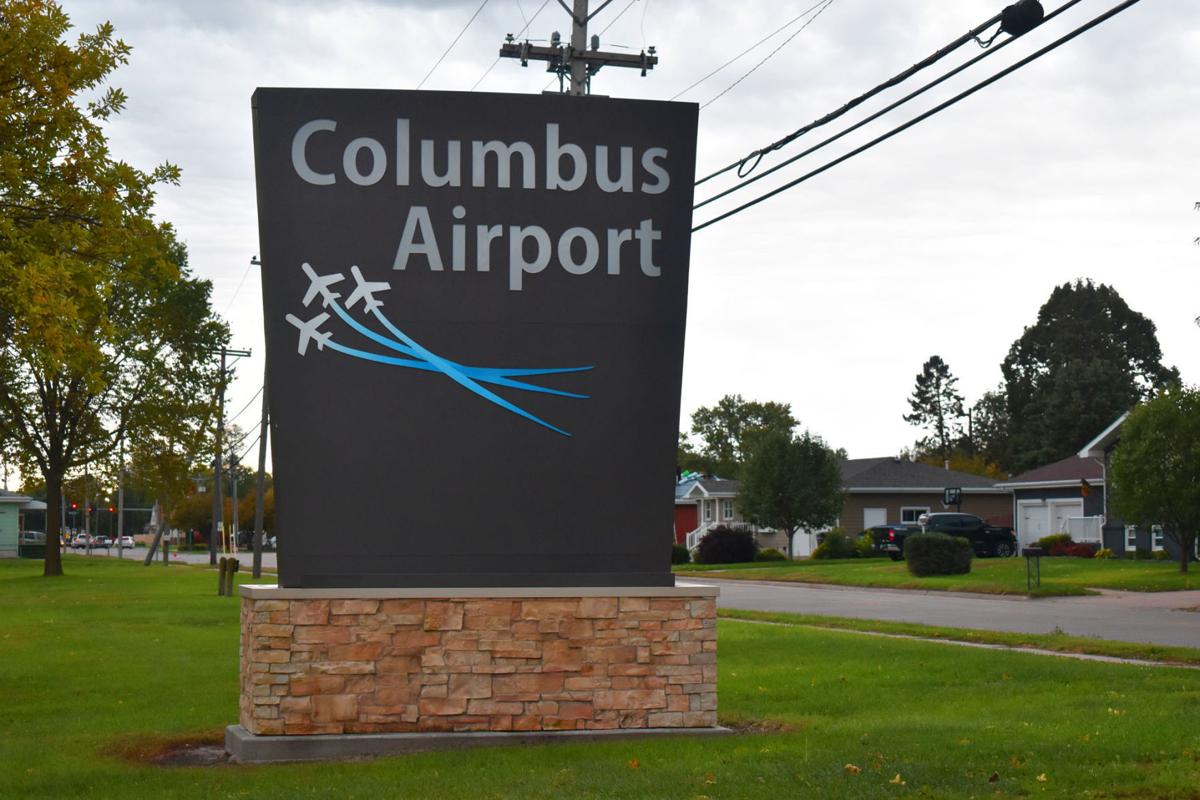 After at least 10 years of brainstorming and back-and-forth, an E-911 Joint Communications Center that houses dispatch representatives from the City of Columbus and Platte County is up and running.

The facility, located within the Administration Building at Columbus Municipal Airport, directs all emergency calls to one centralized location where city and county dispatchers work as a single unit to ensure an appropriate, rapid response is given, every single time.

“The idea of this project goes back 10-12 years, if not more,” Columbus Mayor Jim Bulkley said of the center, which officially opened Oct. 1. “The city and the county prior to this (happening) couldn’t seem to come together and work together, and this here is really a testament of the leadership of the county and city and knowing that we are doing this for the betterment of our citizens ...

“We are all in this together, because remember, citizens of Columbus are citizens of Platte County.”

The opening of the facility has been months in the making, as a sizable portion of the Administration Building had to be completely gutted and appropriately restructured to encompass all of the necessary upgrades and equipment. Project expenses were divided between the city and the county.

“Basically an even split,” said Jerry Engdahl, chairman of the Platte County Board of Supervisors, of the overall expense structure. “The city provided the building and the upgrades, but going forward it (the center) isn’t really city or county – it’s everyone. Everyone in the county will be helping to pay for this with their county taxes.”

Although bringing the joint communications center to life wasn’t an easy process, the rationale behind the project is actually pretty simple. Anytime a process can be streamlined it’s generally a good thing for the public, said Pam Sybrant, communications director of the Joint Communication Center.

And when streamlining a process doesn’t just eliminate some headaches but also pays dividends in terms of saving lives, it isn’t just convenient, it’s a necessity, she said.

“Basically, they were two separate groups,” Sybrant said of the old dispatch setup. “Which wasn’t ideal because all the 9-1-1 calls would come into the police station. So if they (city) took a call and it was a county issue, they would have to transfer it to the sheriff’s office, which was a block-and-a-half away.

“That led to a delay in service, I mean, even if it was only a minute, it was a delay. And that matters.”

There is no delay with the new setup, which will soon be operated by 15 full-time dispatch employees who work different, 12-hour shifts during a week-long period. Thirty-six screens are spread throughout the facility and each dispatcher’s desk has seven to eight.

The inside of the center can only be reached by using a keycard to ensure air-tight security, and video feeds monitor the outside of the building. In the near future, dispatch will be able to monitor what’s happening at the new Columbus Police Station, Columbus Fire Station and Platte County Sheriff’s Office.

Now that the E-911 center is fully operational, Sybrant said the mission is to have all the dispatchers – city and county – working as a single unit within six months. Although both groups are dispatchers, as expected, things operated a little differently at the sheriff’s office versus the police department.

Although there have been some expected – and unexpected – hiccups along the way, the process of getting the entire dispatch team up to speed has gone very well, Sybrant said.

Bulkley noted that he and other county officials hope that this will pave the way for future joint undertakings.

“I hope that this is the beginning of an even better working relationship between the two entities so that we can see if down the road we can collaborate more,” the mayor said of county and city interactions. “We are all working with the taxpayers’ dollars, so if we can make it a better system or expenditure for whatever we are working on, it’s a plus-plus.

“And here, we are able to utilize the expertise of both entities, and in the long run, that will make for a stronger E-911 system that will benefit our citizens.”

Pam Sybrant, director of the newly opened E-911 Joint Communications Center, sits next to a few of the 36 monitors filling the dispatch room located inside of the administration building at Columbus Municipal Airport. The new dispatch location houses representatives of both the Columbus Police Department and Platte County Sheriff's Office.

Maddy Johnson has served as a dispatch coordinator for the Platte County Sheriff's Office for 16 years. She said that the move into the newly opened E-911 Joint Communications Center has been pretty smooth sailing, overall.