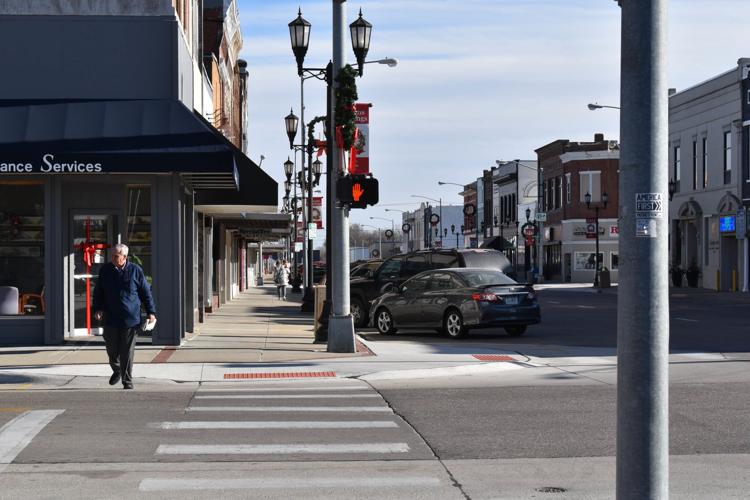 Downtown Columbus on Wednesday sees some activity. Officials say that the economy in Columbus did well, thanks to the support of local businesses and tourism from youth sporting events. 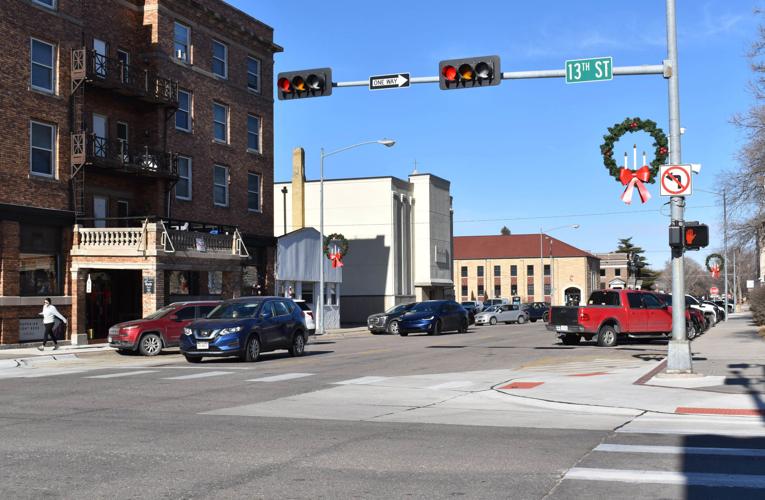 The corner of 13th Street and 27th Avenue in downtown Columbus sees light traffic Wednesday afternoon. Businesses in Columbus saw shortages in product and employees in 2021 but were still able persevere despite those challenges, according to the Columbus Area Chamber of Commerce.

From the start of construction on the Columbus Community Building to the opening of new businesses, Columbus has seen positive growth throughout 2021, as well as negative aspects such as shortages in housing, employees and material.

Local officials highlighted the ups and downs of 2021 and, according to them, Columbus won’t be stopping in its progress anytime soon.

If there’s one thing that can be said about the past year, said Columbus Area Chamber of Commerce President Dawson Brunswick, it’s that the Columbus business community perseveres.

Brunswick noted that while sales tax has grown in 2021, shortages from the COVID-19 pandemic have negatively impacted businesses both large and small.

And, he added, that’s especially true for manufacturers. When manufacturers can’t meet demand on their end, it causes shortages for other companies that sell those products.

Along with product shortage, 2021 also experienced a difficulty in finding and retaining employees.

The Nebraska Department of Labor reported an unemployment rate of 1% in Columbus for November 2021 but it’s a doubled-edged sword. A low unemployment rate also means a smaller pool of applicants from which to recruit people.

Brunswick noted the chamber’s Drive for Five program which aims to help bring in potential employees and connect current local high schoolers with local businesses so they can learn about the job opportunities available in Columbus. The chamber had a strong recruiting season this fall, he added.

“A good number of resumes came back and about 25% of those usually convert into placements that we know of,” Brunswick said. “There's 25% we know that goes somewhere else and there's about 50% that we don't really hear from; they may end up here, they may not.”

A big key to attracting people to Columbus – and Nebraska in general – is physically getting them here so they can see firsthand the opportunities available in the community, Brunswick said.

“We're kind of like Nebraska recruiting back when Nebraska was good at football,” he said. “People would be like 'Nebraska?' and then they get here and then you'd experience Lincoln, you'd experience Memorial Stadium, that even with a 3-9 record that you still have sellouts. Columbus is like that where if we're able to get him here, we can usually convert them.”

The chamber has seen an increase in membership the past year, Brunswick said, noting the work the organization has been doing with its Columbus Bucks. Columbus Bucks can be used similar to regular money at participating chamber businesses.

Brunswick said a large amount of Columbus Bucks has been sold this holiday season – businesses have been giving their employees Columbus Bucks as a bonus to keep that money local and support other businesses.

The chamber also ran a Christmas promo from Black Friday through December in which those who spend Columbus Bucks during that time are entered to win an additional $500 in Columbus Bucks, in order to encourage people to spend those bucks that they have.

Columbus is a community that definitely supports its small, local businesses. Brunswick noted the importance of shopping local – it’s the locally-owned ventures that support youth athletic teams and other activities, events and causes.

“If you go into Lincoln or Omaha and do your holiday shopping, that money is not here anymore,” he said. “That's less money for that business owner to contribute to the United Way, to the high school STEM Academy. The different things that we have going on that it takes local money, you don't see 'X Business’ in Lincoln coming in and donating to those programs.”

In 2021, the apartment complex The Flats at 5th, 2676 E 5th Ave., opened near Walmart and affordable senior housing arrived at the Columbus Family Resource Center, 3116 18th St. But, units are still being filled faster than they can be built.

A study shared by RDG Planning and Design to the Columbus City Council in early December showed that housing in Columbus can’t keep up with the city’s ever-growing population.

Brunswick noted the study took into account the fact that there are 2,000 open jobs in Columbus. According to the study, if one-third of those jobs were filled, nearly 670 units would need to be built to fit that need.

“We're catching up. We still have a backlog and deficit,” Brunswick said. “I think almost every community in America has seen that since the 2008 crisis. And no one's really caught back up but you're seeing a lot of good growth.”

The houses that are on the market are being snatched up fast, according to kwElite realtor Cheryl Richardson.

"We still don't have a whole lot on the market right now for buyers," Richardson said. "I am seeing a little bit more but still the inventory is low and they go quick."

Looking to the new year, Richardson said the beginning of 2022 will most likely look the same as 2021.

"...What I have been reading is it's going to be leveling off," Richardson said. "But for Columbus, I'm not sure … We are just so low on housing in Columbus for the amount of people that are coming in."

As far as tourism goes, things appear to be getting back to normal following the pandemic.

“Right now, as far as overnight stays, we are back to pre-pandemic levels,” Columbus Area Convention and Visitors Bureau Director Katy McNeil said. “It's really nice to drive by our hotels in the town and to see them full.”

McNeil said there’s been a 25% increase in occupancy and revenue at lodging amenities in Columbus from 2020 to 2021. Of course, 2020 had been a monster of a year in all its own due to COVID.

“We've seen a consistent increase every single month, for this past year,” she added.

McNeil said youth sports attributed greatly to this increase – it’s a big reason why people travel through the community. From basketball, football, baseball, softballs and all sorts of tournaments, outsiders have been boosting the local economy by supporting sports.

“I can't say enough good things about the tournaments that we had this summer that really helped bring us back up,” McNeil said.

Columbus’ many amenities help attract people to the community. McNeil noted the Columbus Area Antique Fire Apparatus Museum. A large number of out-of-town visitors came to the area to see Santa there during Christmastime.

The Andrew Jackson Higgins National Memorial at Pawnee Park is also a big attraction in Columbus, especially during the summer for those who traveled the Lincoln Highway, she added. The Lincoln Highway was the earliest transcontinental highway route in the United States.

Other draws to this area are Columbus’ athletic facilities, Pawnee Plunge, Glur’s Tavern and the Horn T Zoo in Monroe, McNeil said. Other ventures have seen an explosion in business in 2021, such as S.T.A.R. Escape Rooms in Columbus, she said.

“They have seen an awesome year,” McNeil added. “They've broken records for how many people have been through the escape rooms.”

Looking to 2022, ’23 and ’24, McNeil said she is looking forward to the completion of construction projects around town – the Columbus Community Building in the downtown, the new casino with a possible hotel west of Columbus and Columbus Community Hospital’s new field house being constructed in the north part of town.

Also, McNeil said, Camp Pawnee will be looking at some renovations and she’s predicting that the City of Humphrey will become a destination down the road with its new swimming pool plans and the recently-opened Veterans Memorial.

“In the next five years, we'll have a lot of improvements, a lot of new businesses, new restaurants, new things popping up,” McNeil said. “So it's a really exciting time here.”

2021 also saw the beginning of construction for some community projects including the Columbus Community Building, which will house the Columbus Public Library, a children's museum, art gallery, coffee shop, Columbus City Hall and other amenities. The former library building was demolished earlier this year to make way for the new structure. The building is scheduled to open in the spring of 2023. Once city offices moves into that building, the current city hall will be torn down for a parking lot.

Columbus Exposition and Racing announced in July a partnership with Caesars Entertainment Group to build a Harrah's casino and racetrack. Located off Highway 81 northwest of town, the development project is set to feature a new horse racing surface, a 40,000 square-foot-casino and sportsbook and space for restaurants and retails. There are also plans for a hotel there.

Passersby may also notice construction taking place on the north end of town near the Columbus Wellness Center -- Columbus Community Hospital broke ground in October on a new field house, which will be located behind the wellness center. The new facility will include tennis courts, a football and soccer field, volleyball and basketball courts and a suspended track for running and walking. It will also have fitness, wellness, child care and rehabilitation services. The facility is tentatively slated to open December 2023, which may be pushed back if there are construction material delays.

Whoa! Scientists finally know why these dolphins are lining up to rub against coral

Vladimir Putin often got frustrated with Donald Trump, here’s why

Vladimir Putin often got frustrated with Donald Trump, here’s why

Downtown Columbus on Wednesday sees some activity. Officials say that the economy in Columbus did well, thanks to the support of local businesses and tourism from youth sporting events.

The corner of 13th Street and 27th Avenue in downtown Columbus sees light traffic Wednesday afternoon. Businesses in Columbus saw shortages in product and employees in 2021 but were still able persevere despite those challenges, according to the Columbus Area Chamber of Commerce.