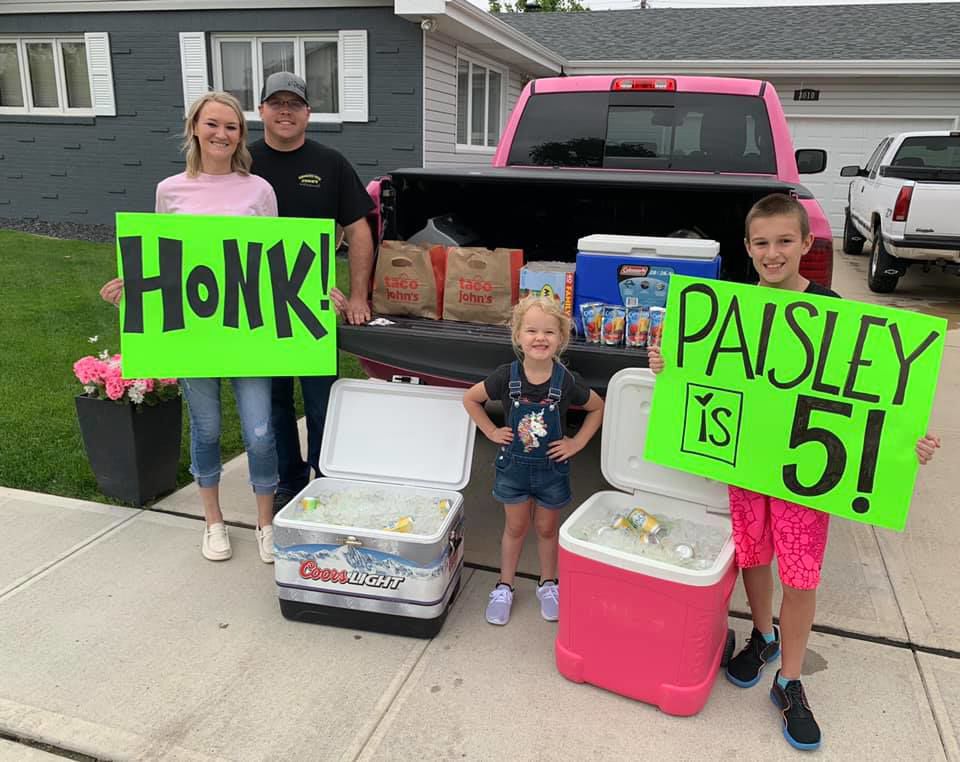 The Saalfeld family organized a parade this week for 5-year-old Paisley, center. Pictured with her are her parents, Nicole and Vince, and brother Jack. 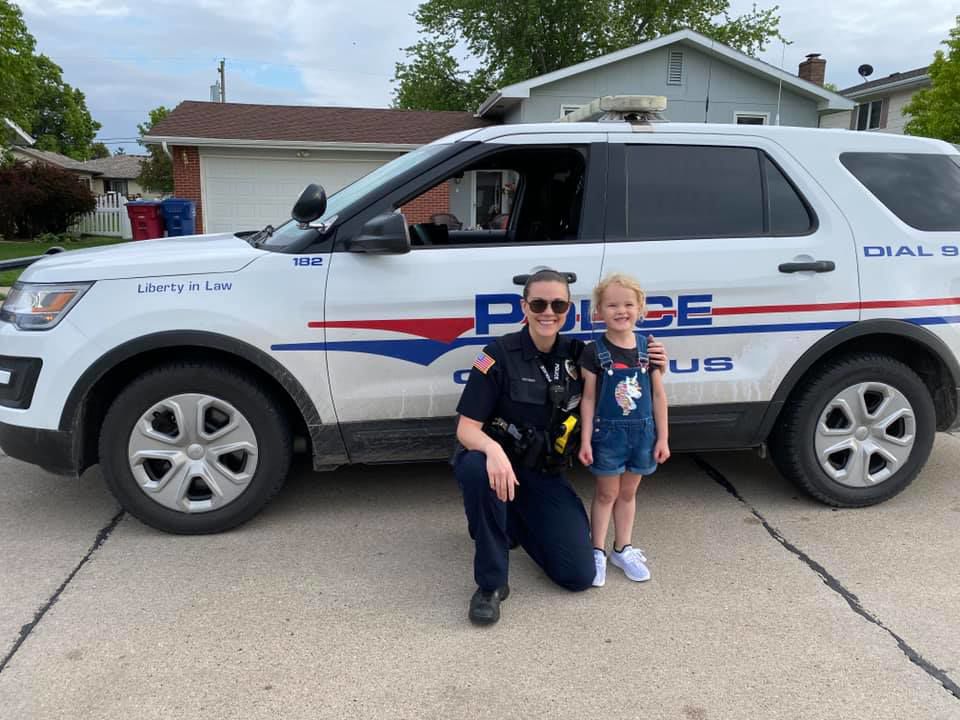 Five-year-old Paisley, a fan of first responders, received a surprise during her birthday parade this week as she got a visit from the Columbus Police Department, as well as the Columbus Fire Department. 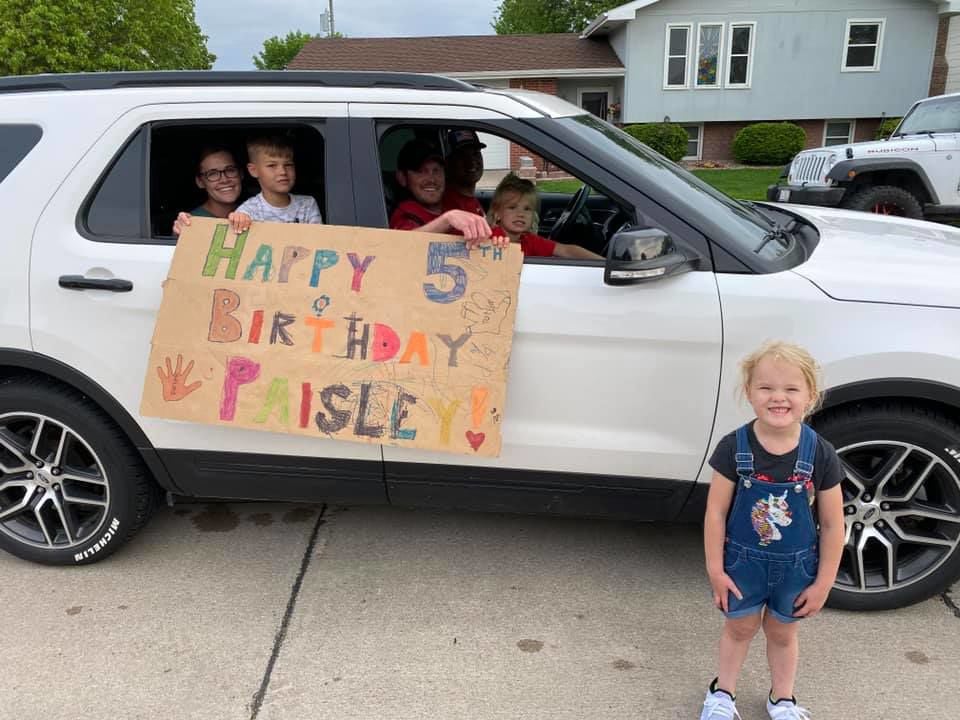 Paisley, far right, celebrated her fifth birthday this week with a parade. Visitors held out handmade signs and dropped off gifts.

One lucky 5-year-old girl received a special surprise Wednesday during her birthday parade: A visit from the Columbus Police and Fire departments.

Nicole Saalfeld of Columbus asked her daughter, Paisley, what she wanted to do for her fifth birthday. Paisley replied that she wanted a parade, but what she didn’t know was that Nicole asked her friends at the police and fire departments to stop by as well.

“My favorite were the police and the fire,” Paisley said. “They were the secret from Mommy.”

A Columbus fire truck led the parade with police cars and friends and family of the Saalfelds.

“She was confused thinking they were on a call but I told her, ‘No, they’re here for you,” Nicole said.

Paisley was able to choose her guest list for the parade but Nicole also invited other visitors as well, such as Paisley’s preschool teacher. Nicole had counted 60 cars in the parade with some vehicles holding four people. It’s estimated that around or over 100 people stopped by to wish Paisley a happy birthday.

Nicole planned the parade for about a week, though police and fire vehicles were a last-minute addition. A parade celebration was preferable as many people are still hesitant about group gatherings due to the COVID-19 crisis.

“I texted them the night before and asked them to come out,” she added. The beginning of the parade was hectic, but the police officer drove around a second time for a photo op with Paisley.

The family, including Nicole’s husband, Vince, and son, Jack, handed out tacos, Capri Sun packets and fruit snacks for parade participants. Visitors also made banners for Paisley and dropped off gifts.

Paisley has a police outfit that she enjoys playing in, Nicole noted, and is a fan of law enforcement and firefighters.

“They pull people over and get the bad guys,” Paisley said on why she likes police officers. But, when asked if she wanted to be an officer when she grows up, Paisley replied "no" because she lost her handcuffs.

Having the police and fire vehicles in the parade was one part of her fifth birthday present – the other was getting her ears pierced.

Parades have been a popular, social distancing acceptable way to celebrate events such as birthdays, graduations and retirements.

David City Public Schools held a graduation parade for its senior class on May 16, immediately following a virtual commencement. A surprise parade in recognition of now-retired Christ Lutheran teacher Kathy Petersen had been held earlier this month. Also, various parades have been held at area nursing homes, such as one that had been held at Brookestone Acres on April 29 which had included local first responders, loved ones of residents and those that just wanted to express their support of Columbus’ most vulnerable population.

Most recently, Barb’s School of Dance is holding a costume parade Saturday in which students will be wearing their recital costumes and walking around the outside of The Heritage at Meridian Gardens, Brookestone Acres and Emerald Rehab & Nursing Columbus. If it rains, as the forecast predicts, the event will be held Tuesday instead. Students at Desiree’s Dancers in David City participated in a similar parade Wednesday evening at David Place.

Paisley's fifth-birthday celebration will undoubtedly be something she remembers for a long time.

“It was a really good turnout and a lot of fun,” Nicole Saalfeld said of her daughter’s birthday parade.

The Saalfeld family organized a parade this week for 5-year-old Paisley, center. Pictured with her are her parents, Nicole and Vince, and brother Jack.

Five-year-old Paisley, a fan of first responders, received a surprise during her birthday parade this week as she got a visit from the Columbus Police Department, as well as the Columbus Fire Department.

Paisley, far right, celebrated her fifth birthday this week with a parade. Visitors held out handmade signs and dropped off gifts.