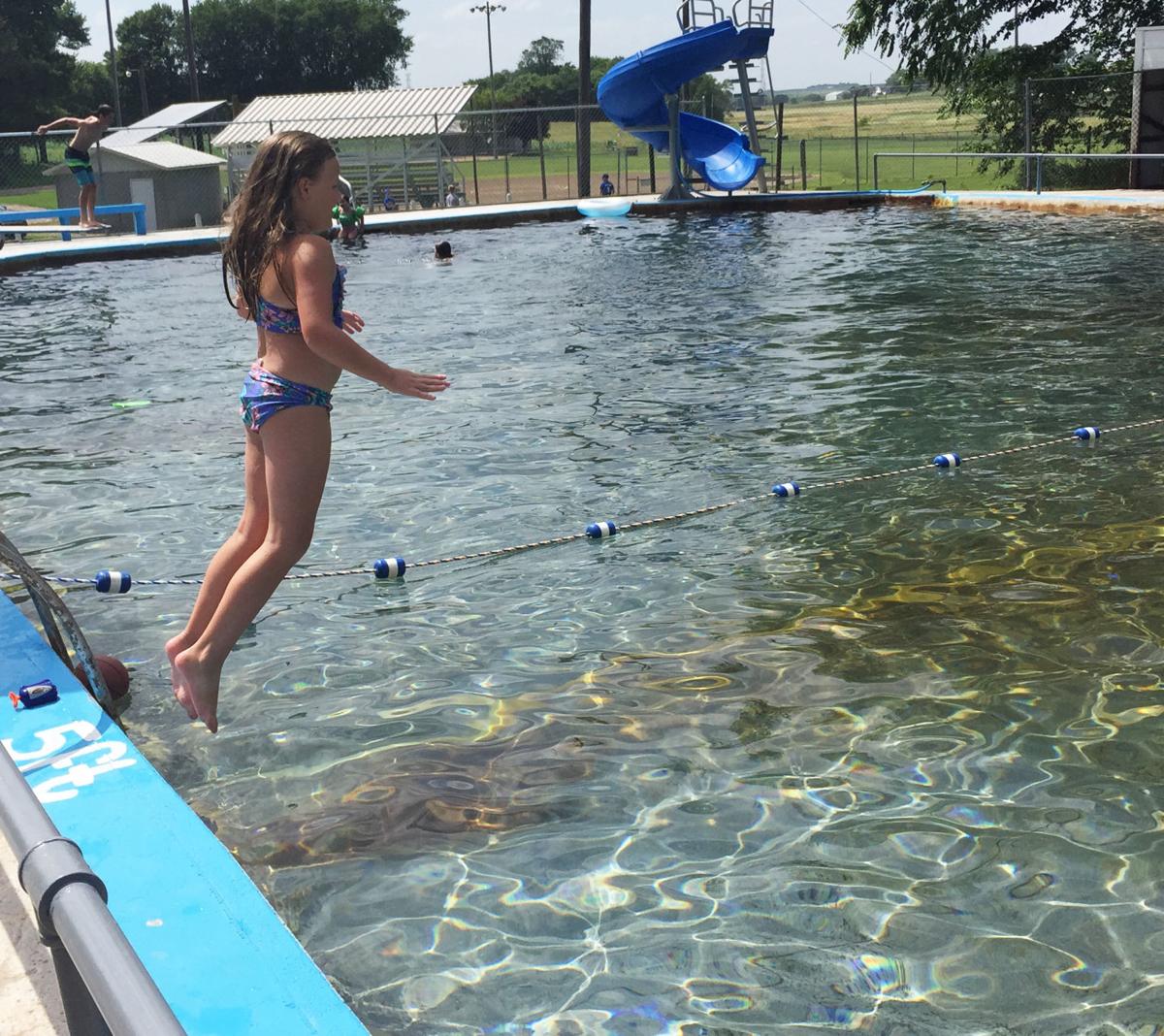 Kinlee Olson on a recent day jumps into the swimming pool in Creston, the oldest continuously operating pool in Nebraska. The pool will celebrate its 100th anniversary with a community celebration on July 7, complete with food, games and a 25-cent fee for entry to the pool. 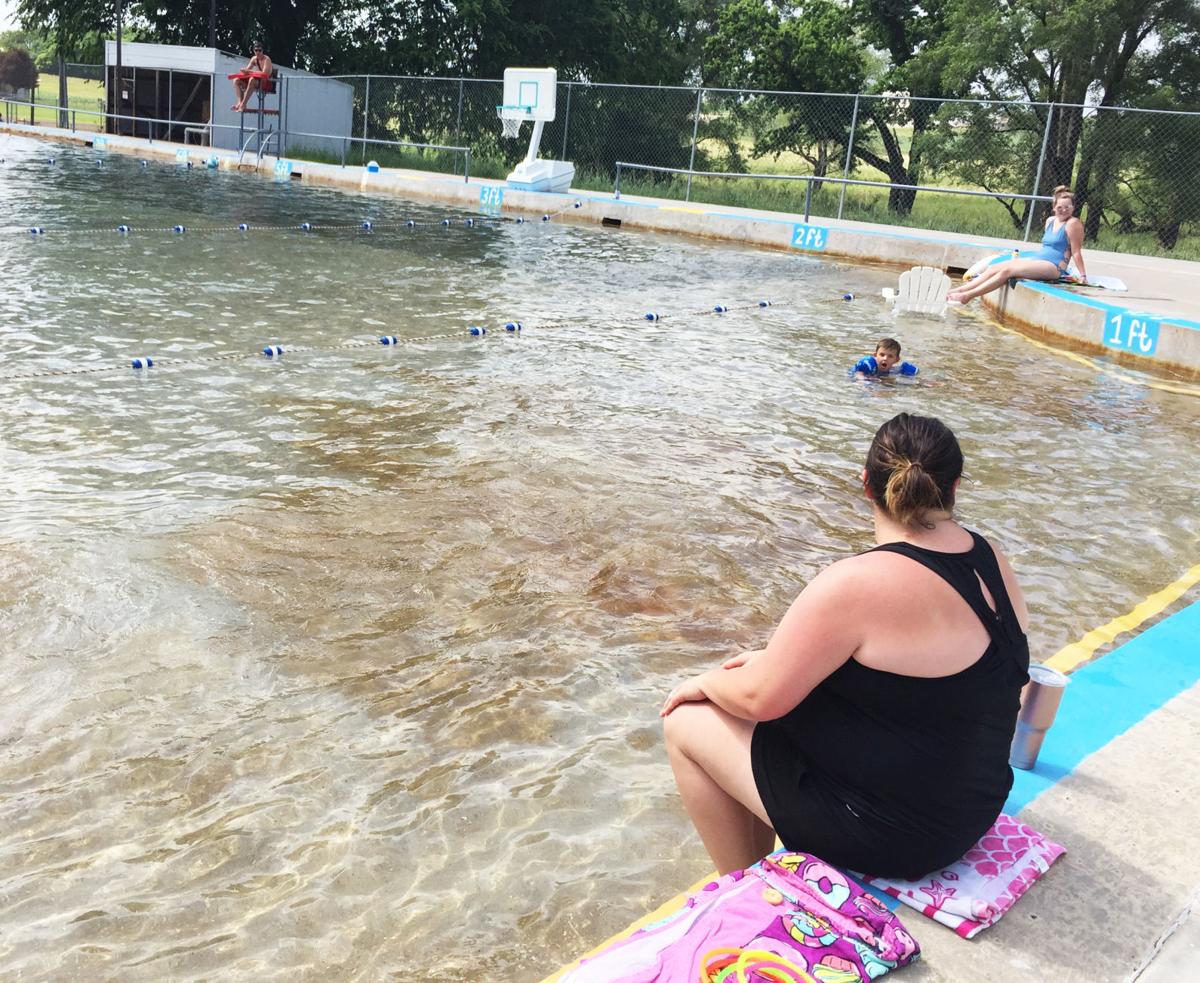 Carolyn Olson looks on as swimmers young and old enjoy a hot Thursday at the Creston swimming pool. The pool will celebrate its 100th anniversary on July 7. 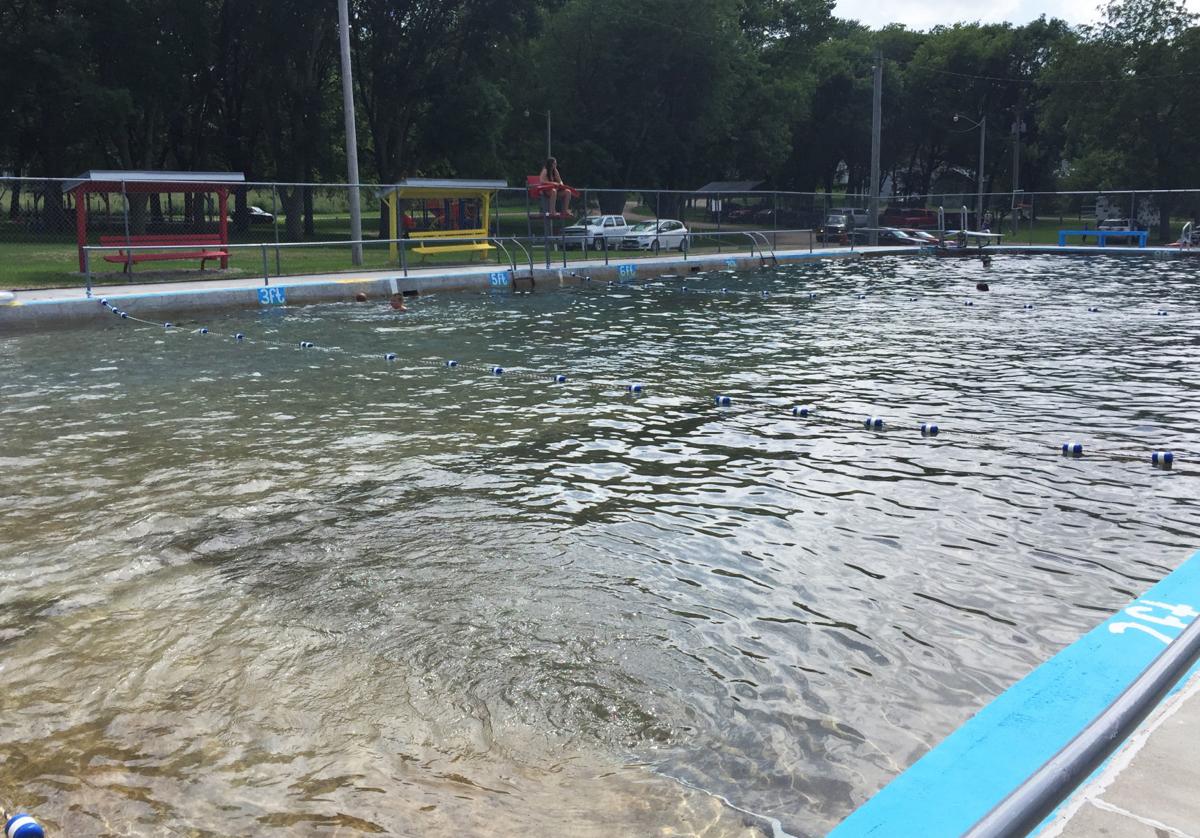 In 1917, at a time when most of the roads in the surrounding area were mostly dirt and assorted pebbles, Dr. Harry Morris was becoming concerned about the creek in Creston. Not just the water content itself, but the people swimming in it.

Young children swam in the creek but would bring back a nasty surprise for their parents. They got sick, and Morris suspected that the creek had something to do with it.

Frustrated, he decided to do something about it. He convinced community leaders and businesses to help him build a swimming pool, a place where children of all ages could swim to their heart’s content, without fear of getting dysentery.

Thousands of dollars were spent and hundreds of volunteers helped out, and in September 1919, the pool finally opened to the public.

One hundred years later, it remains in operation as the oldest continuously operating pool in Nebraska, a testament to the can-do attitude of this village, exemplified in the pool’s earliest days, when it took longer than expected for water to get to the pool.

“When it was time to get water to the pool, they had no pipes,” said Joan Hollatz, treasurer for the Village of Creston and noted pool historian. “Of course, the water tower’s at the top of the hill and the pool is at the bottom of the hill. They found some pipe that was supposedly a fence around the school grounds, and in the middle of the night, in the dark, they stole all this pipe and laid it down from the water tower to the pool to fill it.”

Fortunately, no one will need to steal piping from an old fence in order to fill the Creston pool now. Nowadays, things are a little bit more modern, with water slides and a diving board ready to entertain the most adventurous soul. However, there will be a blast from the past on July 7, as the pool will celebrate its 100th anniversary with a party in Creston Park. A cookout will be held, and people will also partake in yard games. But the most interesting feature of the party is what it will take to get into the pool that day: 25 cents, or how much it would have cost to swim in 1919.

For a town of 210, the Creston pool remains popular. People like the simplicity of the pool: Its zero-entry, meaning that the pool slopes downward as you continue to traverse it. This helps with people learning how to swim for the first time, or at least, how to float.

“We do not have a baby pool,” Hollatz said. “Everyone is in the same pool.”

It was built as a 110 feet by 55 feet structure, a good-sized pool for a village like Creston. That hasn’t changed, though there have been some upgrades to the amenities over the years.

“Through the years, there’s been some remodeling,” Hollatz said. “Bathhouses have been built, new walls have been poured, new floor was poured (and) a new deck around the top has been placed.”

Helping to run this pool is 17-year-old Reagan Settje, who used to enjoy going to the pool as a child, playing with her friends and soaking up the summer sun. Now, she has the responsibility of running the space, and she’s enjoying every minute of it.

“We’ve had our fair share of fixes (that) we’ve had to make over the years,” Settje said. “But, it’s cool knowing that the small (village) of Creston has such a big historical thing in Nebraska. I grew up swimming here (and) my parents did (too). Just seeing all of the kids swim, it’s a good place to be in the summer.”

This is the first year that Settje will manage the pool. She served as a lifeguard before this year; now, she gets the chance to handle all of the people who will come in on a hot day looking for some refreshment. Those residents will have to work without a functioning water slide for the time being. A new slide was put into place this year, but the state of Nebraska has yet to give the go-ahead for the slide to open. So it sits, next to the diving boards, looming in the background behind the baseball field.

Still, Settje said she is looking forward to the rest of the summer at the Creston pool. She specifically loves the small-town feel of the pool, one that is relaxing and enjoyable, without being too overbearing.

“I just think it’s a homey place,” Settje said. “It’s a fun place to be. You can just come and play with your friends, no matter if you want to swim in the 1-foot (or) 8-foot, dive off the board (or) all of the above.”

During the ceremony on July 7, a special guest will join the residents of Creston for the 100th-anniversary party. Dr. Morris has long since passed, but his grandson and granddaughter will be there for the festivities. It will be a celebration of Creston and its people, and Hollatz couldn’t be prouder.

“The thing is, Creston—not just the pool, but in everything—just gets a lot of people to volunteer to do things,” Hollatz said. “People don’t expect to get paid for everything they do, and that’s what Creston is about. It’s just volunteering. Whatever needs to be done, someone will step forward and get it done.”

Zach Roth is a reporter for The Columbus Telegram. Reach him via email at zachary.roth@gmail.com.

Habitat for Humanity Columbus is tackling two house builds this year for the first time since its 2010 inception.

Kinlee Olson on a recent day jumps into the swimming pool in Creston, the oldest continuously operating pool in Nebraska. The pool will celebrate its 100th anniversary with a community celebration on July 7, complete with food, games and a 25-cent fee for entry to the pool.

Carolyn Olson looks on as swimmers young and old enjoy a hot Thursday at the Creston swimming pool. The pool will celebrate its 100th anniversary on July 7.