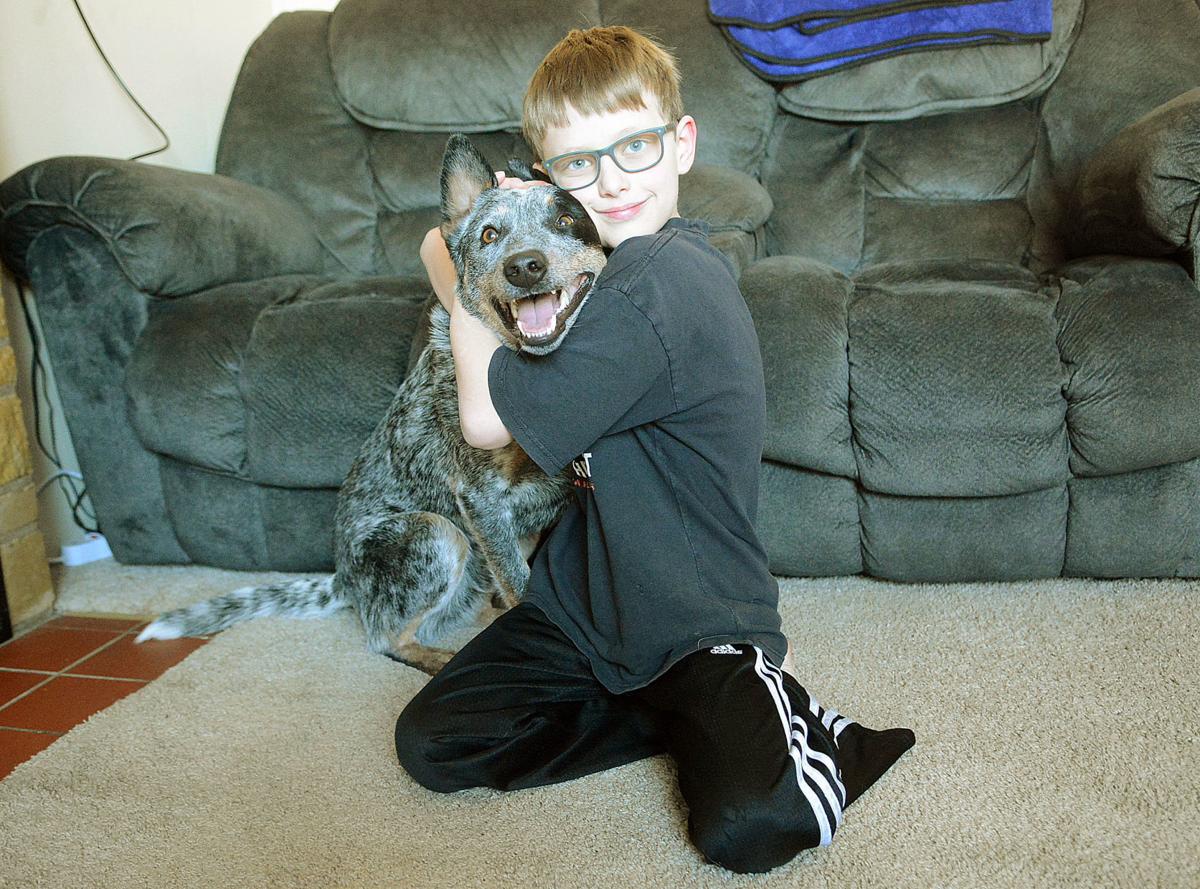 Jayden Svitak poses for a photo with his dog Jack on Friday at his home in Columbus. Jack is a service dog trained to recognize and lessen Jayden's anxiety attacks. The trouble is, since he was added to the Svitak family, the home has four dogs and, according to the city, violates a city ordinance. 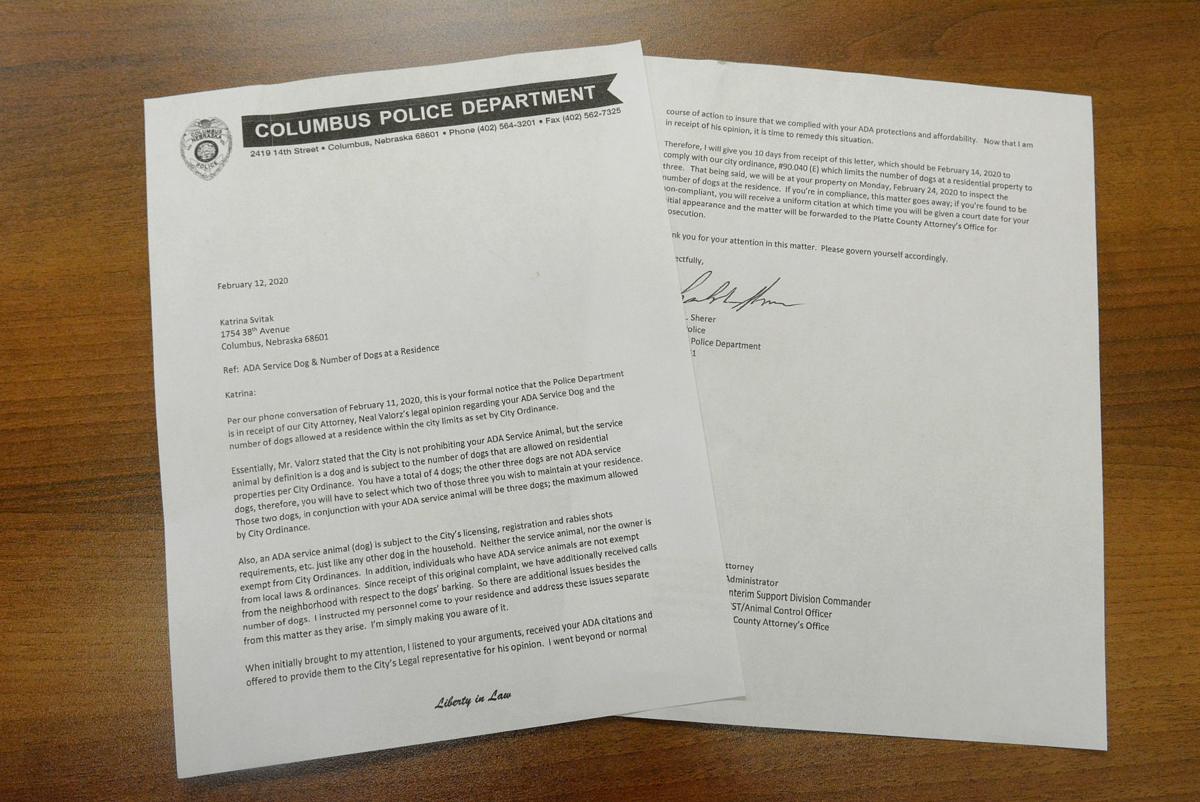 Copy of the letter sent by The Columbus Police Department to the Svitaks setting a Feb. 24 inspection date to determine if the family is still in violation of the city code. 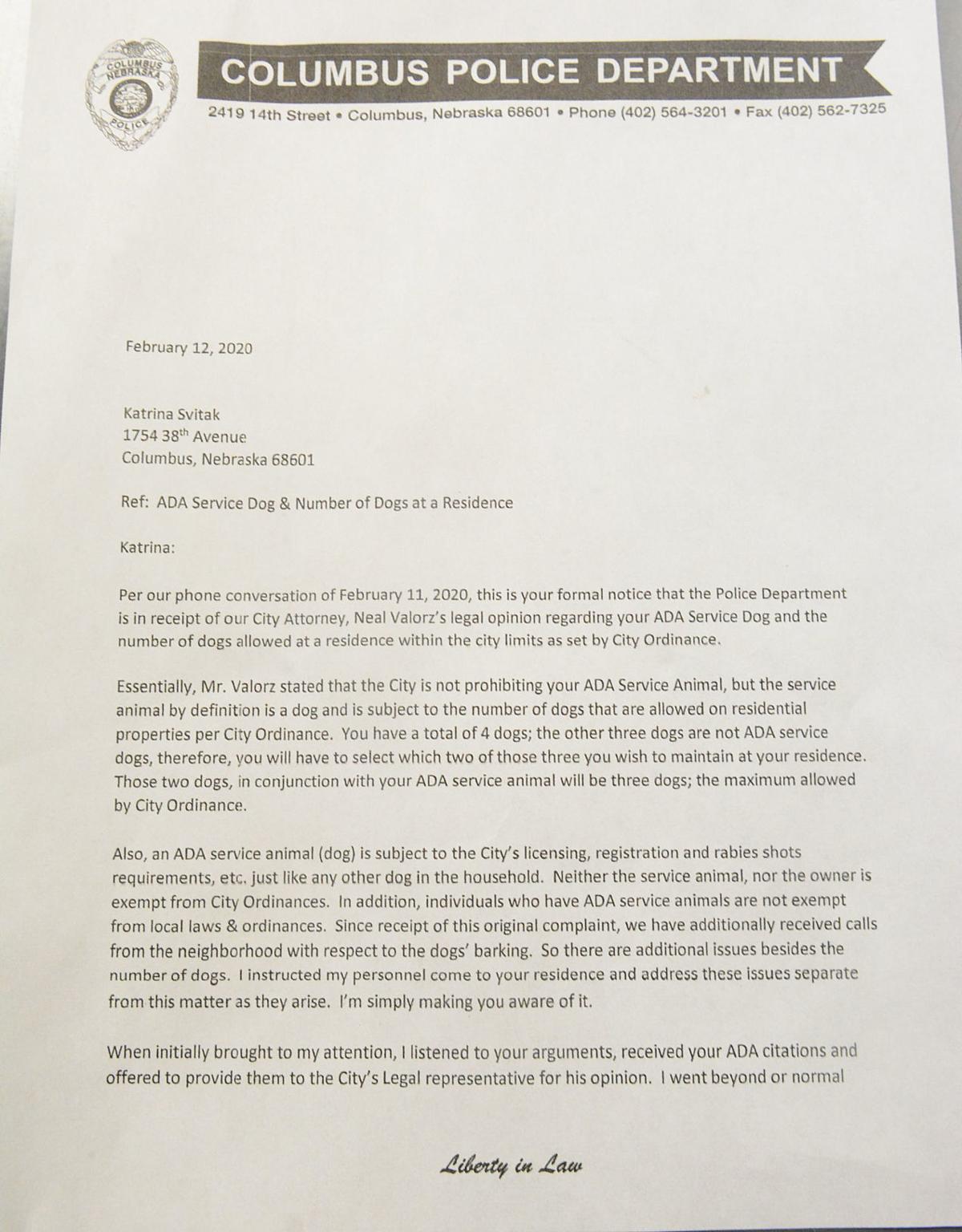 Page 1 of the letter received Friday by the Svitaks from the Columbus Police Department. 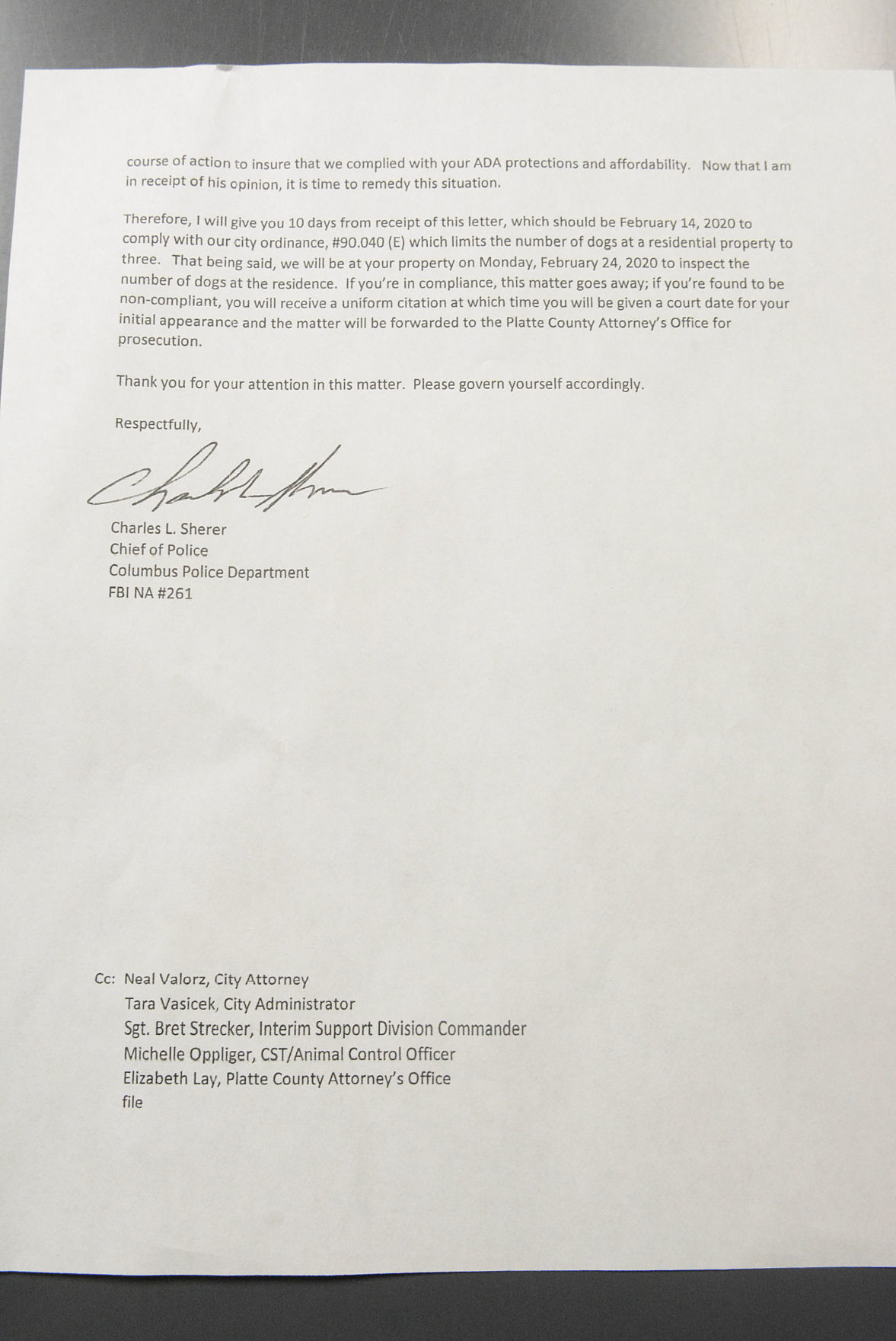 Page 2 of the letter received Friday by the Svitaks from the Columbus Police Department.

Jayden Svitak's life has made a dramatic turn for the better since Jack came into his life.

Jack, a blue heeler, or as officially categorized by the American Kennel Club, an Australian Cattle Dog, was prescribed to Jayden by his doctor nearly two years ago.

Everything from mood, attitude, focus and basic quality of life has improved dramatically for Jayden since Jack, a trained service dog, became part of the Svitak family a year-and-a-half ago.

But, Jack also became the fourth family dog when he entered the household in August 2018 - a number that technically violates Columbus city code.

As a result, the Columbus Police Department has informed the Svitaks that they face potential fines if the number of dogs in the home remains at four.

The Svitaks said they believe because of Jack's status as a service dog, he either doesn't fit the parameters of the code, or if his existence does in fact exceed the limit, an exception must be applied because of the Americans With Disabilities Act.

The family received a letter from the Columbus Police Department on Friday dated Feb. 12 and signed by Chief Charles Sherer giving the Svitaks 10 days to comply with the city ordinance.

The letter states that on Feb. 24, the department will visit the home for inspection. If the family is determined to be non-compliant, a uniform citation will be issued, a court date set and the matter forwarded to the county attorney for prosecution.

Jayden had always displayed some symptoms of anti-social behavior from birth, but it became most apparent in kindergarten and as he progressed into grade school. He was eventually diagnosed with Attention-Deficit/Hyperactivity Disorder and Oppositional Defiant Disorder.

In the spring of 2018, Jayden's doctor prescribed a service dog to help manage and control his anxiety. With three dogs already in the household, and mindful of the city ordinance limiting household dogs to three, the Svitaks contacted Animal Control and then-officer Shawn Flowers.

Katrina alleged Flowers informed her that because they would be acquiring a service dog, so long as the dog was licensed and followed an immunization schedule, there would be no violation of city code.

So, the Svitaks acquired Jack for $500 and had him trained. For Jayden, everything changed.

"During anxiety attacks, Jack puts pressure on (Jayden), which helps control the attacks. Jack lays on Jayden on the couch or the bed or the floor. He can sense when the attacks are coming. He knows before we do," Katrina said. "His behavior has drastically gotten better. His anxiety attacks have decreased greatly. His grades and life at school have drastically improved. He went from being a problem child at school to being one of the best kids in school."

Flowers then resigned from his post in May and moved to Omaha. In December, Katrina said a neighbor called in a complaint that the Svitaks were exceeding the dog limit.

Katrina alleged though she explained to a handful of Columbus Police officers that the dog was protected under the Americans with Disability Act (ADA), one officer told her the city doesn't recognize service dogs and required proof of certification. Another officer, she said, indicated the city would not make accommodations for the family to exceed the city code.

Asking for a service dog's documentation is not allowed by the ADA.

In mid-December, the family found a temporary home for Jack when an initial deadline was set to comply with the ordinance. Jack was back in the house on Jan. 22 while the city decided to again review the matter, but, Katrina said Animal Control came by on Tuesday.

She contacted Chief Sherer, who she claimed advised no accommodation would be made, then the letter came on Friday.

The letter set the Feb. 24 deadline and stated: "(City Attorney) Mr. (Neal) Valorz is not prohibiting your ADA Service Animal, but the service animal by definition is a dog and is subject to the number of dogs that are allowed on residential properties per City Ordinance."

Additionally, the letter stated that the family has four dogs, and since the other three are not ADA service dogs, Katrina would have to select which two of the three will remain in the house, forcing a removal of one of the family's three chihuahuas.

"Those two dogs," the letter stated, "in conjunction with your ADA service animal will be three dogs; the maximum allowed by City Ordinance."

Information provided by the ADA online disagrees with the city's opinion that Jack is, by definition, a dog. Louis House, a housing investigator with the Nebraska Equal Opportunity Commission, explained as much.

"If someone is saying that you have four animals, and one of those animals is a service animal, they would be incorrect," House said. "There would only be three animals and one service dog, and that service dog is always considered an employee because any time they have that service animal jacket on, or they are around their owner, they're working."

Were Jack an emotional support animal, he would not qualify, and thus not be a service dog. But because he is trained to sense and spot Jayden's anxiety attacks, and either prevent the attacks or lessen the impact, he qualifies as a service animal.

So what exactly does one of Jayden's attacks look like?

"He basically shuts down completely. He doesn’t talk to anybody. He starts pulling out his hair," Katrina said. "He just…completely shuts down and withdraws inside himself. It’s hard to get him back out."

Because Jack is trained for exactly that, House said he cannot, and should not, be counted simply as a dog.

"Just by doing that job alone, again, it is a worker and not an animal," he said. "It doesn't have to be something that's a 24-hour service thing. It could just be the dog warns of something or perceives something coming on just by being able to sniff pheromones, different hormones, different things like that.

The Telegram contacted Valorz's office on Friday afternoon for a reaction to House's comments but he could not be reached.

Katrina said she got in touch with Jayden's doctor, but he didn't have any way to help. The family has also tried various attorneys in town but she said none will take the case, citing a lack of experience with ADA cases.

Meanwhile, Jayden has suffered through a yo-yo of emotions over the past month when the family moved Jack to a temporary home and then brought him back.

"Basically, we slid back a year in all of his progress," Katrina said. "It was horrible for him."

There is a lawyer in Lincoln that might be able to help, but the Svitaks said they can't necessarily afford the representation.

Following the arrival of the letter, Katrina wrote up her own letter she plans  to mail to the city requesting an accommodation. She pointed out that once the family's 12-year-old chihuahua passes away, the city ordinance would no longer apply.

She also acknowledged her requirement to keep Jack licensed and up-to-date on shots and offered to provide a copy of the physician's service animal recommendation and proof of the impact Jack has had on Jayden's life.

At this point though, it seems the city has made the other three dogs the issue. What counts and what doesn't count may have to be sorted out in front of a judge.

"(The dog) can be there for that reason, but again, they're working. That's the key thing with a service animal, you can't consider it an animal, because whenever you see it, most of the time, it's working," House said. "It has to be looked at as a worker or an employee."

Check out the City of Columbus' full letter sent to the Svitak family and shared with the Telegram exclusively on our website with this story.

Katrina Svitak was at the dentist when Columbus Mayor Jim Bulkley showed up on her doorstep.

Jayden Svitak poses for a photo with his dog Jack on Friday at his home in Columbus. Jack is a service dog trained to recognize and lessen Jayden's anxiety attacks. The trouble is, since he was added to the Svitak family, the home has four dogs and, according to the city, violates a city ordinance.

Copy of the letter sent by The Columbus Police Department to the Svitaks setting a Feb. 24 inspection date to determine if the family is still in violation of the city code.

Page 1 of the letter received Friday by the Svitaks from the Columbus Police Department.

Page 2 of the letter received Friday by the Svitaks from the Columbus Police Department.