Become a Member
Read Today's E-edition
Share This
Flood talk, or not?: Agribusiness leaders discuss approach for upcoming gathering
0 Comments
Share this
1 of 2 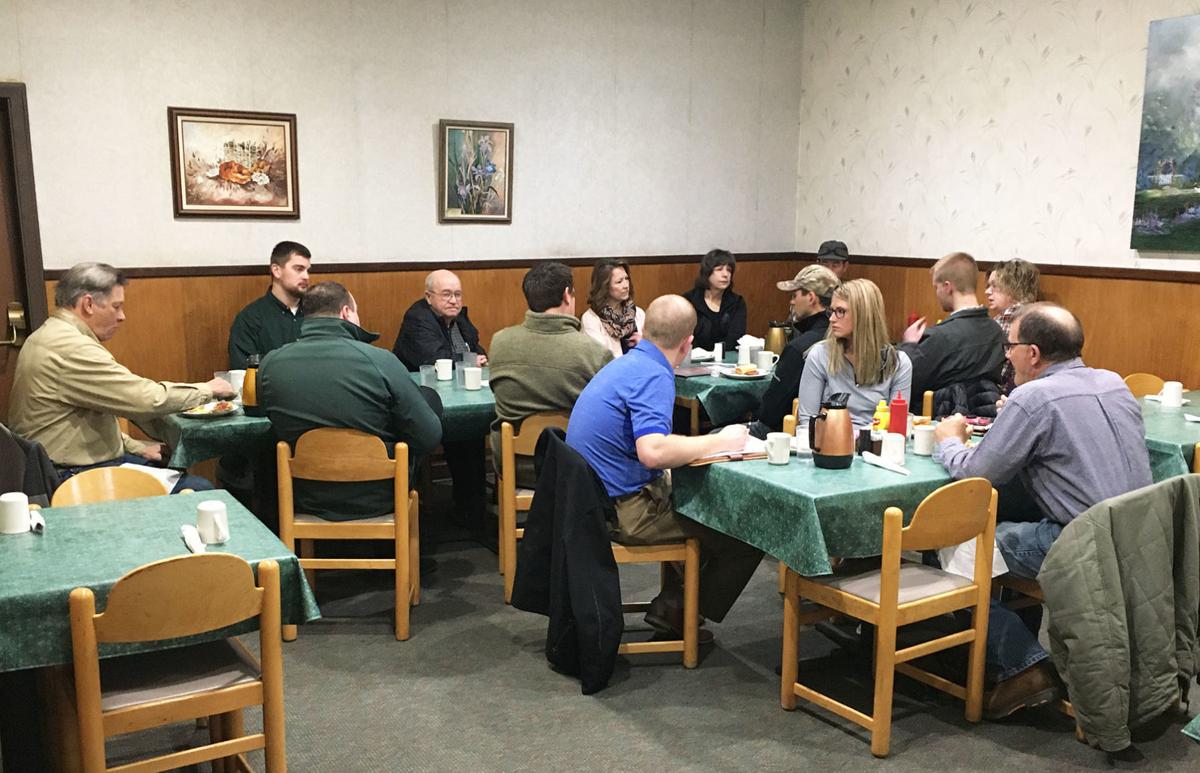 More than a dozen gather inside of Stack 'N Steak during Friday morning's Agribusiness Committee meeting. 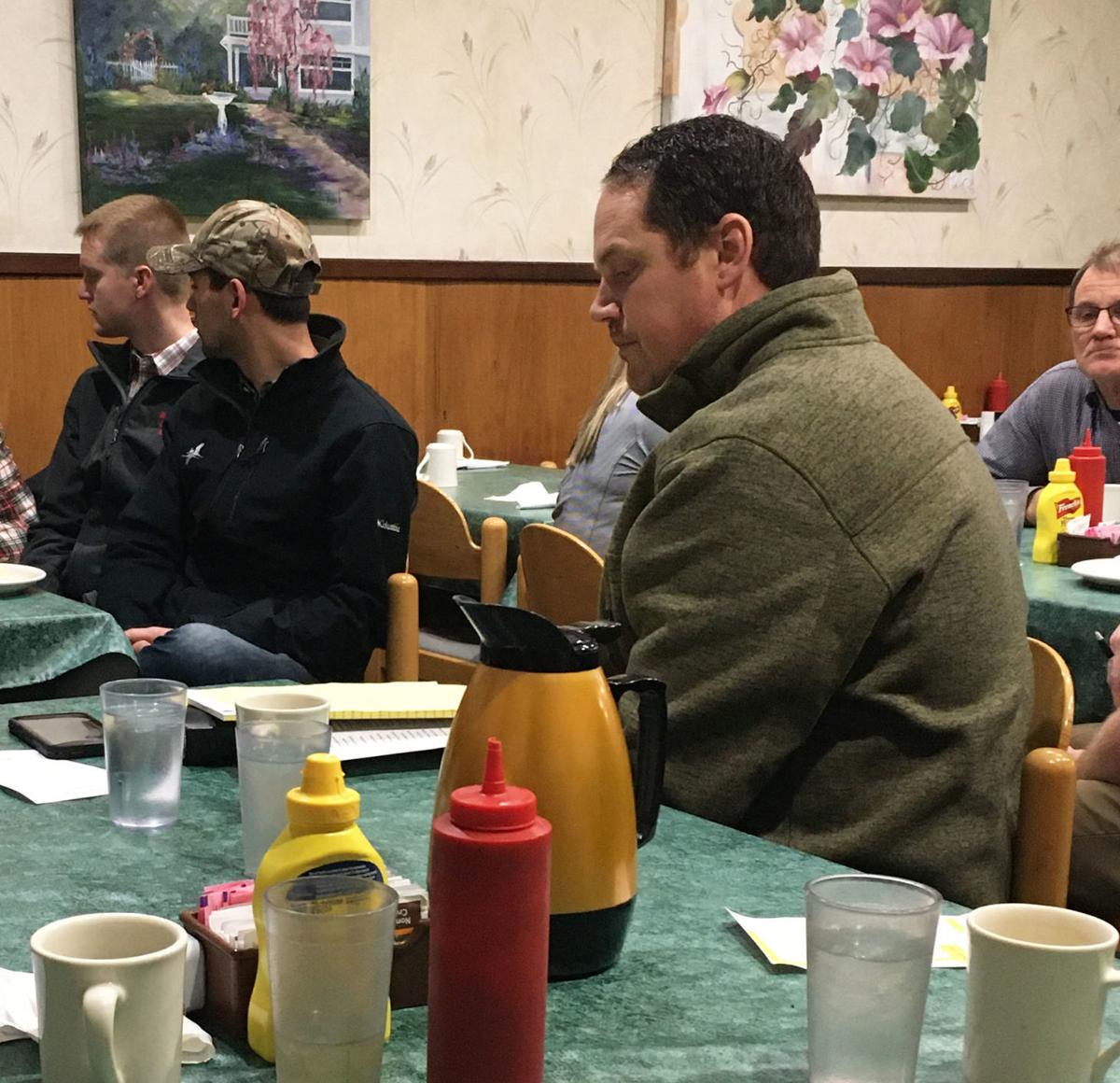 Brad Christensen, chairman of the Columbus Area Chamber of Commerce Agribusiness Committee, right, looks on while some discussion takes place.

The Columbus Area Chamber of Commerce Agribusiness Committee during its Friday morning meeting at Stack ‘N Steak discussed whether last year’s catastrophic flooding should have a seat at the table during March's Rural Recognition Banquet.

Of the dozen or so in attendance, the feeling seemed to be fairly consistent: The flooding was too big of an event to not at least touch on, even though the gathering predominately focuses on industry pioneers accomplishing big things.

“I think we would be remiss if we didn’t mention it at least just a little bit,” said Miki Naylor, of Pillen Family Farms. “It doesn’t need to be a lot, but the resiliency of our community … That would be something nice to touch on.”

Ag Park General Manager Brian Palmer noted how he has contacts within the Nebraska Air National Guard, and that at least one spent time in the sky during the flooding stockpiling photos and videos.

“I could, potentially – I don’t know how much success I’d have, but I could reach out to those people and find out if they could share,” Palmer said.

He added that he thought it might be neat at the Rural Recognition Banquet to highlight some of the places throughout Columbus, Platte County and its surrounding areas where airplane hay-drops assisted farmers and displaced livestock.

“Just to see where they dropped and revisit those places, maybe see something like how they are doing a year later,” Palmer said.

Former state senator Arnie Stuthman, a longtime proponent of a connector between U.S. Highway 30 and Nebraska Highway 64, took a moment during the flood discussion to give another pitch regarding the project that would essentially create a south bypass of Columbus.

If people heard a bit more about it at the Rural Recognition Banquet, Stuthman would be just fine with that.

“I think there’s a definite need; with another flood, we need another way to get across the Platte River,” Stuthman said. “Mainly because Highway 15 was washed out, Highway 81 was washed out and by Monroe was washed out. These people who had to travel really had a big inconvenience …”

In other Agribusiness happenings:

*The committee discussed what its role could be regarding this year’s Cattlemen’s Ball, set to take place June 5-6 in Columbus. Committee Chairman Brad Christensen noted that it seems like the most value would be in finding volunteers to help coordinate the massive gathering.

“It will take up to 1,000 volunteers, this is not a small undertaking,” Columbus farmer Bill Luckey said.

*Attendees discussed Agribusiness Committee meetings, specifically, what is working well and what could use some improvement. It was generally agreed upon that, of course, there’s no way to slot a meeting time that works for everybody (currently meetings are held at 7 a.m.), but there may be some sort of compromise.

There was also chatter about how it could be interesting and beneficial for one Agribusiness member, or attendee, to share a little bit about his or her operation, or place of employment. Additionally, members discussed having more guest speakers and presenters attend Agribusiness meetings down the line, much like they already frequently do during monthly Industrial Leaders gatherings held at Wunderlich’s.

“Columbus is really exploding as far as expanding.”

More than a dozen gather inside of Stack 'N Steak during Friday morning's Agribusiness Committee meeting.

Brad Christensen, chairman of the Columbus Area Chamber of Commerce Agribusiness Committee, right, looks on while some discussion takes place.