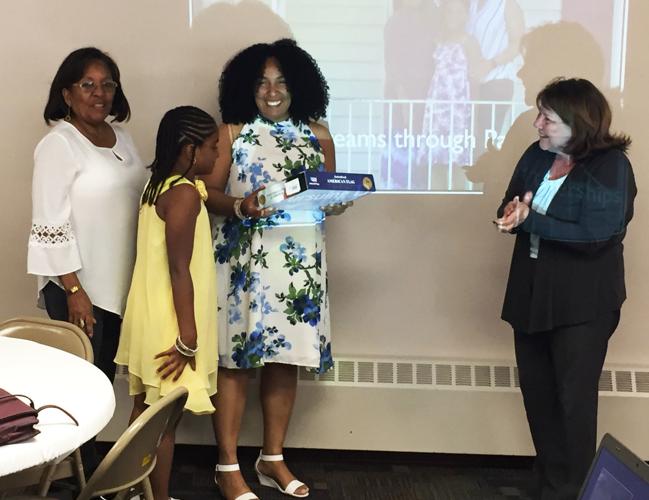 Hollie Olk, right, of Pinnacle Bank, presents Yara Ramos Hernandez with an American flag flown at the U.S. Capitol in Washington D.C. as her daughter, Aurora, and mother, Gilda, look on Thursday at a USDA community event at the Columbus Housing Authority. 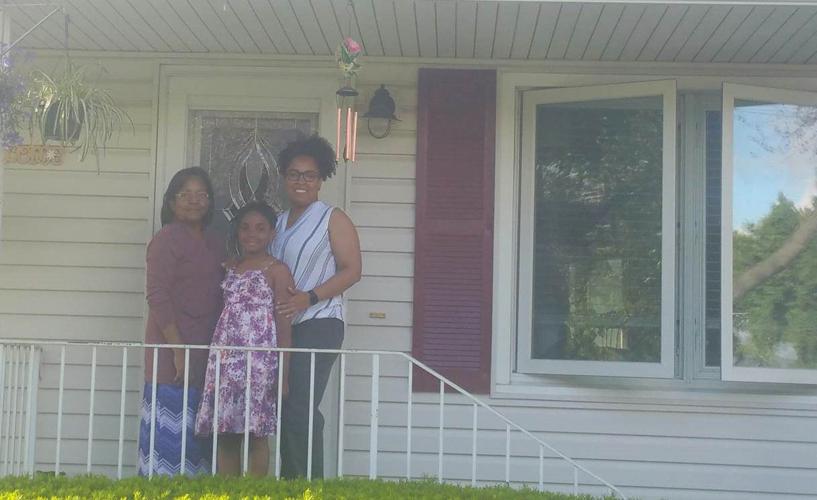 Yara Ramos Hernandez, right, stands in front of her new house along with her mother, Gilda, left, and her daughter, Aurora.

She was experienced and skilled, but with a young daughter and an aging mother to take care of, she needed a place to call her own that would allow for better amenities and care.

“She called me to talk about financing a house,” said Olk, vice president at Pinnacle Bank who manages the mortgage department. “I sat down with her (and) she had lots of questions. That’s what Yara does. She researches intensely to make sure it was a good idea because she wasn’t sure (that) she wanted to buy a house.”

Now Yara has a beautiful new house in Columbus, thanks to months of hard work from Olk with assistance from the Northeast Nebraska Economic Development District and the United States Department of Agriculture’s Guaranteed Home Loan Program. At a USDA community meeting on Thursday, the agency and Olk presented Hernandez with an American flag as a reward for becoming a homeowner.

“She is a success story,” Olk said. “She was in the Dominican Republic for a couple of years after she left Cuba and landed in the United States in Columbus (and) has lived here for six years.”

While she was in the Dominican Republic, she was exposed to a variety of different cultures and languages. However, after two years of living there, she was looking for greater opportunity and decided to make the long jump to the United States.

She had family in the local area, so Columbus was a comfortable fit.

“My brother was living here already,” Hernandez said. “I moved with my daughter and it was nice to come to a place where I already had family.”

After starting out doing graphic design with the Telegram, she moved on to Mastercare Patient Equipment. She continues to work with Mastercare, where she did graphic design and web design. In addition to that, she also decided to start a graphic design business, Havana Stone, right out of her old apartment.

While all of this was going on, Hernandez was preparing to become an American citizen. It had been a goal of hers since she arrived in the U.S., and she finally achieved it in December. She said that she found America to be a land of opportunity, a perfect place to raise her daughter, Aurora, and take care of her mother, Gilda.

“This is a great country,” Hernandez said. “This is a land full of opportunity for everybody, and if you really work for what you want, you can get anything.”

Indeed, her hard work and the growing interests of both daughter and mother led her to find a bigger place than the apartment she was living in when she arrived in America. After meeting Olk at the Entrepreneurship Center, she sat down to talk with her about the possibility of buying a house. That’s when Olk put Hernandez in touch with NENEDD.

"Judy (Joy) at NENEDD happened to have funds," Olk said. "That was lucky (and) she found a house that was in pretty good shape. She got $30,000 in down-payment assistance from NENEDD, which caused her to borrow less from us (at Pinnacle Bank), and that improved her payment."

She only needed $1,000 to pay for the new home, which now has more space for Aurora to play with her friends, more space for Gilda to sew and create and more space for Yara to work with Havana Stone. Most importantly, she has finally achieved her dream of creating new opportunities in America and buying a place for her family to call home in Columbus.

“I felt close to complete (when we moved in),” Hernandez said. “It’s amazing, it’s a feeling of fulfillment and I feel (like) I accomplished a dream. It was a dream for us and having that dream fulfilled is tremendous.”

Olk said that Hernandez's story is a sign that tells people that the long-derided American immigration system can work for anyone if they work hard and have a vision of what they want their life to be.

"The immigration system can work," Olk said. "She is a prime example of it. It's a really neat immigration story about a courageous woman who had the tenacity to set herself some goals and reach them."

Zach Roth is a reporter for The Columbus Telegram. Reach him via email at zroth@columbustelegram.com.

Two people were removed from a May 19 fire in Columbus.

Director Celeste Ditter said she was thrilled when she saw the Columbus Middle School rendition of "Moana Jr." had won not one but three Nebra…

When Rob Gasper took over as co-owner of The Friedhof Building, he became enamored with the structure’s long history in Columbus.

A retweet from UNL Chancellor Ronnie Green persuaded Grady Johnson to idle the planter last Saturday and instead walk across the graduation stage at Memorial Stadium.

US to fly in baby formula on military contracted jets

Rent prices continue to soar across the United States

Rent prices continue to soar across the United States

Hollie Olk, right, of Pinnacle Bank, presents Yara Ramos Hernandez with an American flag flown at the U.S. Capitol in Washington D.C. as her daughter, Aurora, and mother, Gilda, look on Thursday at a USDA community event at the Columbus Housing Authority.

Yara Ramos Hernandez, right, stands in front of her new house along with her mother, Gilda, left, and her daughter, Aurora.