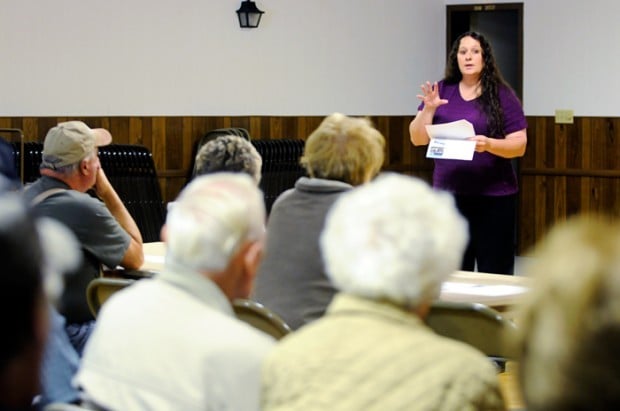 Dawn Bayer, manager of post office operations, speaks to a crowd of Polk citizens during a public meeting concerning changes to the Polk Post Office held at the Polk Community Hall Wednesday afternoon. 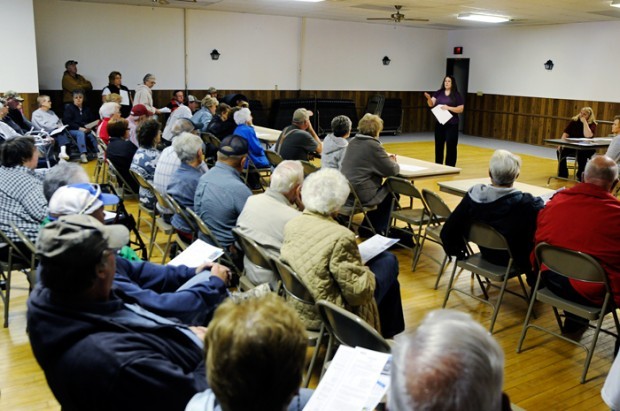 POLK — A public meeting Wednesday outlining proposed changes at the Polk Post Office quickly turned from informational to confrontational, a sign of how frustrated rural Nebraskans are with the U.S. Postal Service’s plan to cut hours at some 300 locations across the state.

Nearly 70 people packed Polk Community Hall for the 1 p.m. meeting, using the hour with area Postal Service officials to defend their use of the local post office and question the operating tactics of the struggling agency, which has said it could lose as much as $18.2 billion per year by 2015 unless major changes are made.

Of the 104 post offices Bayer oversees — those in communities with zip codes beginning with 686 and 687 — only two made money last year. Those were in Norfolk and Hartington, a Cedar County community that’s boosted by sales from the Comfy Feet slipper company there.

Bayer said the Postal Service’s current plan, which reduces retail hours at more than 13,000 of the nation’s smallest post offices, will help meet customer needs, as well as allow the operational changes necessary to keep the Postal Service afloat.

The Postal Service, a self-funding agency that doesn’t receive tax dollar support, has experienced a significant decrease in customer use as people turn to the Internet to communicate and pay bills.

Since 2006, first-class mail volume has declined by 25 percent and customer visits are down by about 27 percent, resulting in a loss of about 40 billion transactions annually.

“In the last five years, we have been trying to cut our costs,” said Bayer, who described measures that included consolidating operations and offering early-retirement buyouts to career postmasters and other employees.

The Postal Service previously targeted 3,700 rural post offices for closure, a move that would have saved $200 million per year, but scrapped that plan in May after a public backlash.

Its new plan to reduce retail hours at smaller post offices to match customer usage and revenues is expected to save $500 million annually after its fully implemented in September 2014.

“This is going to save us from closing offices,” said Bayer.

But that was little consolation for the residents utilizing the Polk Post Office, who argued Wednesday that reducing the hours there to four would hurt local businesses, affect medication deliveries and make it nearly impossible for those with daytime jobs to access services.

Melody Sandell called the plan “discrimination” against rural America. Only a handful of people in the crowd raised their hands when asked by Sandell if they used the Internet for day-to-day business.

Others — many describing the proposal as “ridiculous” — suggested solutions such as sorting mail locally, instead of sending it to the Norfolk processing center, and even went as far as applauding the prospect of Bayer losing her job and blaming the Postal Service for the recent death of a rural carrier who was killed in an on-duty accident on a Polk County highway.

“I would do away with Saturday delivery,” said Brenda Thomas.

“I would live without Saturday delivery. But I want six hours at my post office.”

However, Bayer told the crowd that reducing retail hours is the only option.

“We have got to base our work hours based on the workload, or else we’re not going to survive at all,” she said.

The reductions, which range from two to six hours depending on the workload in each community, are one of four options presented to Postal Service customers in a survey.

While the overwhelming majority of the 153 Polk respondents chose this route, other options include closing the post office in exchange for curbside delivery or to use a nearby post office, which is 12 miles away in Clarks for Polk residents.

A fourth option, which can be added along with the reduced retail hours, establishes a “village post office” in a local business or community office that offers basic services such as prepaid packaging and stamps. These same services are also available online, Bayer said.

The changes, which affect 65 of the 104 post offices in Bayer’s region, won’t alter mail collection times, zip codes or access to post office boxes, she said.

A change in Polk is expected to be implemented Dec. 1, but Bayer said other communities will be targeted over the next two years, beginning with “vacant offices” where there isn’t a permanent postmaster.

Dawn Bayer, manager of post office operations, speaks to a crowd of Polk citizens during a public meeting concerning changes to the Polk Post Office held at the Polk Community Hall Wednesday afternoon.