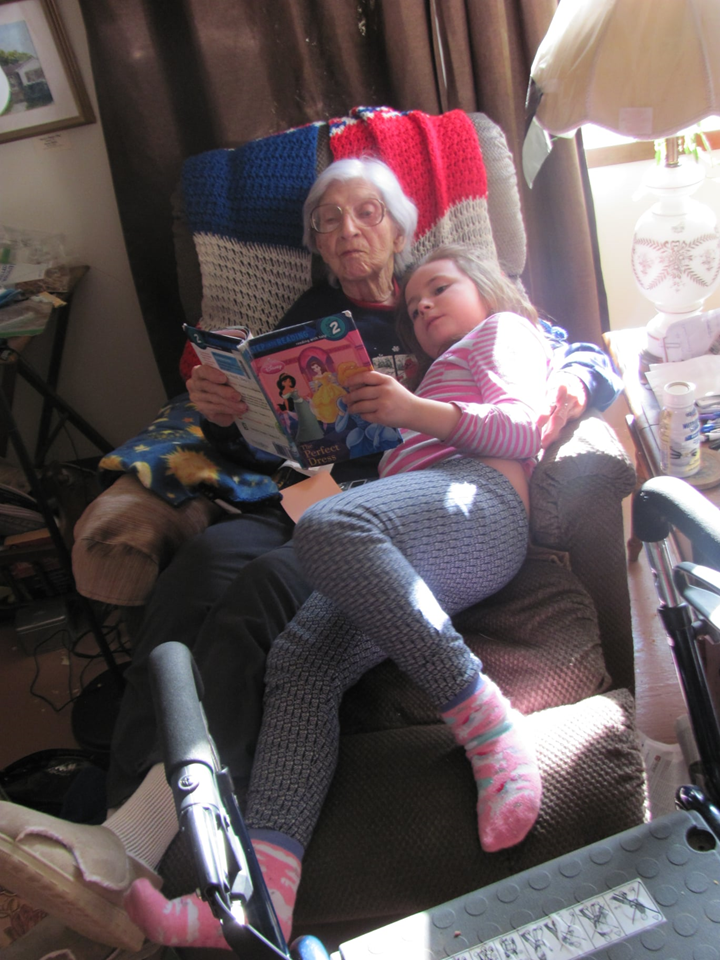 Doris H. Hicks sits with her granddaughter, Pearl, in her lap while they read together. 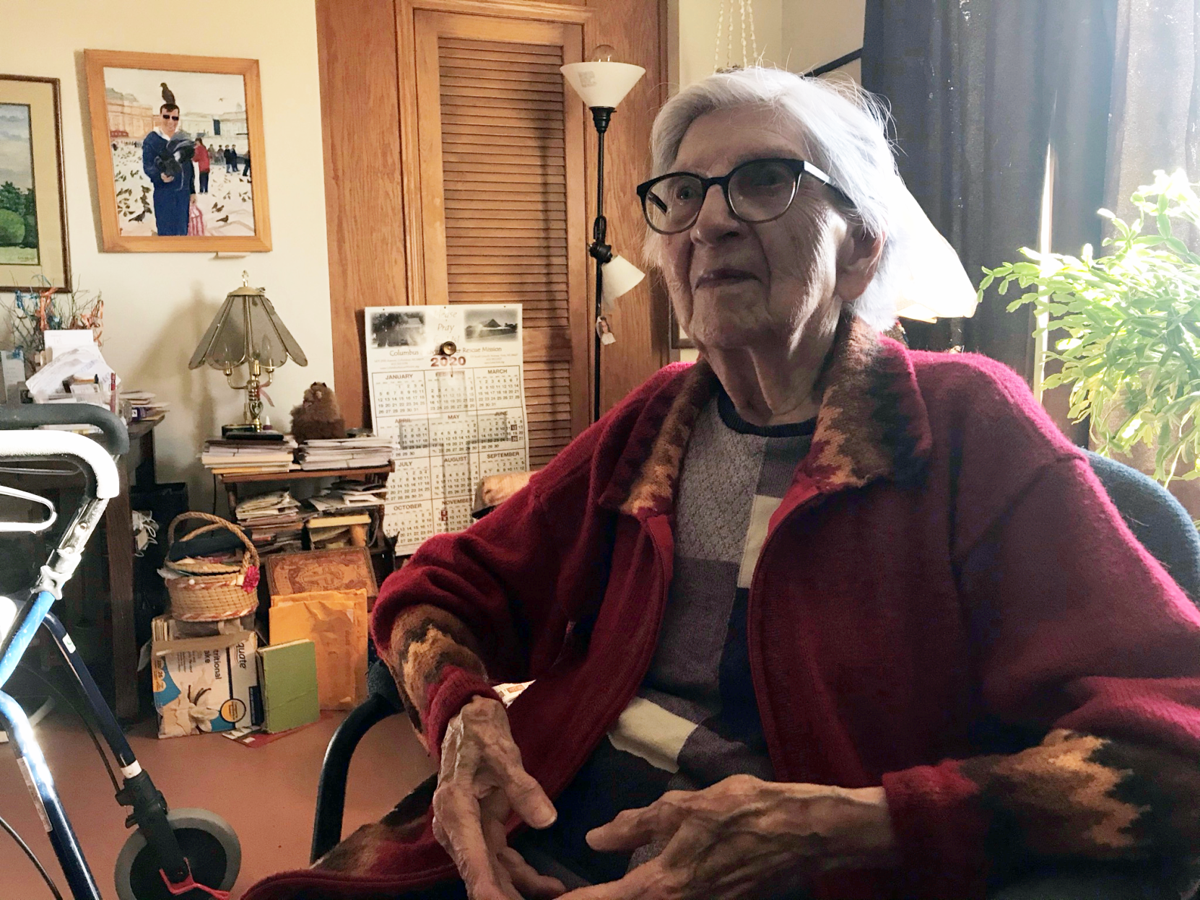 Doris H. Hicks poses for a photo in the living room of her home in Columbus. She is approaching her 100th birthday and her son, Paul Hicks, is asking community members to send her 100 letters in celebration.

Unable to have her celebration at the American Legion this year due to COVID-19, Paul Hicks is asking community members to send his mother, Doris H. Hicks, 100 letters to celebrate her 100th birthday on Nov. 16.

Doris knows her age is impressive, but said she hasn't talked about age for most of her life. She recommended that other people do the same.

"It never bothered me. It was just another year," Doris said.

Letters can be sent to Doris at 406 28th St. She has lived there with her family since 1986, when she, Paul and her husband, Jerry Hicks, moved to Columbus from the east coast.

Now, Doris lives there with Paul, his wife and her granddaughter, Pearl. Paul said Doris and Pearl are very close and spend a great deal of time together.

"Pearl at 8 still sits on her lap and reads to her and she gives Pearl spelling and math tests and sneaks her candy," Paul said in an email to the Telegram.

"She would enjoy hearing from you. For instance, about your life or what you love about the USA or maybe one of God's miracles," Paul wrote in an email. "Maybe an experience when you were in the military if you served."

Born in Wisner and raised in Omaha, Doris is a World War II veteran. She was 21-years-old when she joined the Women's Army Auxiliary Corps after Japan bombed Pearl Harbor. She said she joined as soon as she could because her brother, a railroad worker, couldn't.

"Railroads were essential," Doris said. "And he had two children. So I said, 'You stay home and I'll go.' It was a good duty."

She went to Des Moines for testing and then got sent to radio school in Kansas City. She went to Georgia, New Hampshire, Massachusetts, New York and then California. Going to California separated her from a man she was planning to marry.

"We were gung-ho. We had picked out an apartment and talked about it," Doris said.

Doris said while it was never explicitly stated, but that she was transferred because the Army wanted to keep her in the service. Training radio operators took a lot of time and if the service caught wind of plans — like marriage — that might take one of them away from the job, they would transfer them.

"You have headsets on and you get 10, 12, 15 different signals, and you can pick your own out of that. I was amazed how easily you can," Doris said.

She got sent back to Delaware, then back to California and then finally spent the last year of WWII in Las Vegas.

A few years later in 1950, Doris moved to Washington, D.C., where she met the man who would become her husband. Doris said Washington was a great place for dancing, at least it was in the 1950s.

"I love to dance. I could dance every night and I almost did," Doris said. "Some of the churches and most all of the schools, especially the high schools, had free dancing. One Methodist church even had lessons and they had square dancing and folk dancing and ballroom dancing. I learned how to tango."

That's where Jerry was.

"A bunch of the same people went all these different dances," Doris said. "Another girl and I would go in and you could dance with anybody — good dancers, the really good dancers. Jerry was not a good dancer," Doris said, chuckling. "But he liked to dance, so we danced anyway."

After they'd known each other for about a year, Jerry invited Doris to his sister's surprise birthday party.

"We went and I liked his family. And he always spoke well of them," Doris said. "So I respected him and I did like his family and they liked me."

Doris and Jerry were married in Our Savior Lutheran Church in Omaha, the same one where she was raised. Eventually, they moved from the East Coast to Columbus to be closer to her family.

Doris said she is glad she moved back home because she ended up losing her sister, brother and mother all in the span of a few years — her brother to a heart attack, her mother following kidney problems and her sister to a car crash.

"Boy, did I thank God for letting me come here and be with them," Doris said. "We were together a lot. We were a close family."

From the way Doris and Paul interact, it's clear that is still true.

In the aftermath of what happened in Washington, D.C., last week, many are looking to explain to students what is going on.

NPPD Board gets new leadership

'One of the lucky ones': Moser talks COVID recovery, 2021 Legislative Session

Things haven’t quite been the same since state Sen. Mike Moser on Jan. 6 returned to the Nebraska State Capitol in downtown Lincoln for the st…

Those wanting some tasty breakfast food and to support a good cause can stop by a local pancake feed set for Sunday.

After debate, the Columbus City Council moved forward with all but one of the South Mobility Study's 8th Street recommendations Monday night.

An estimated 180 registered voters turned out on Wednesday night for the 2021 annual meeting of the Platte County Agricultural Society.

Christ Lutheran Church in Columbus was organized exactly 149 years and 11 months ago.

Doris H. Hicks sits with her granddaughter, Pearl, in her lap while they read together.

Doris H. Hicks poses for a photo in the living room of her home in Columbus. She is approaching her 100th birthday and her son, Paul Hicks, is asking community members to send her 100 letters in celebration.